The 4 Basque-Pyrenees pantry essentials in my kitchen

These ingredients are threads that tie me to my family 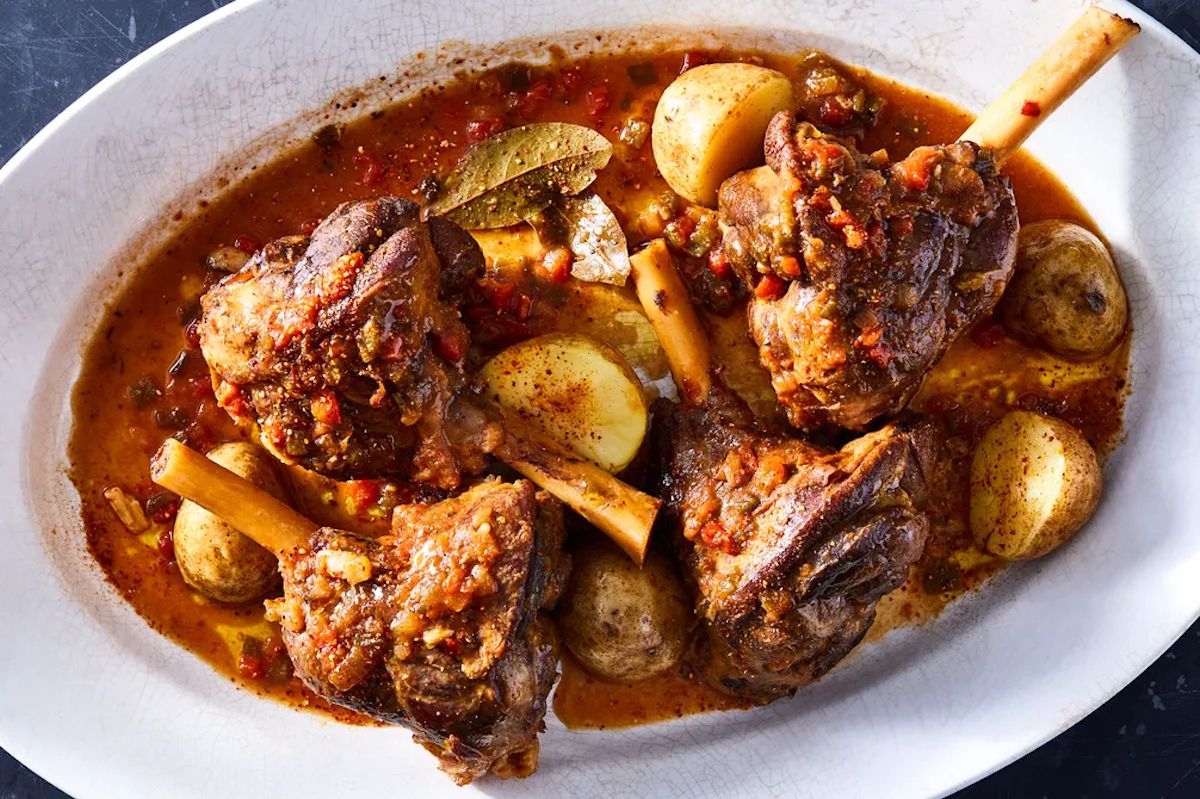 Welcome to Asha Loupy's Pantry! In each installment of this series, a recipe developer will share with us the pantry items essential to their cooking. This month, we're exploring four Basque-Pyrenees staples in Asha's kitchen.

As a longtime home cook, former grocery buyer for a specialty food shop, and now recipe developer, my pantry remains much more well-traveled than I am — from Malaysian sambal and shrimp paste to Pragati turmeric from Andhra Pradesh, to Spanish extra-virgin olive oil and Basque peppers. The euphoria I was filled with at the first thought of sharing my pantry was quickly replaced by stomach-dropping dread — what region or country was I actually qualified to write about?

As the recipe editor for the equitable spice company Diaspora Co. and, well, my being brown, I felt that readers would want and expect to see an Indian pantry from me. Up until very recently, the work of BIPOC food writers — and the cuisines we could be an authority on — was tied very closely to the color of our skin. The scope of our work being reduced through a white lens to familial dishes and what we grew up eating. But here's the thing: I didn't grow up eating Bengali food, as my skin would suggest.

I was adopted from Calcutta, India, at 10 weeks old by my mom, and I grew up in Sacramento, California. My mom and I cooked a few Indian dishes like keema and aloo gobi, but they were in equal rotation with stir-fries, Santa Maria–style tri-tip, corn-salsa-stuffed tacos, French onion soup, and roast chicken. From a very young age, food and cooking captured my attention–I wanted to cook everything.

Julia Child, Jacques Pépin, and Martin Yan graced my television on Saturday mornings instead of cartoons. When I was four, I asked my mom for "frootier" olive oil. I started writing my own cookbook before I could actually write full sentences. And I loved to talk (and talk, and talk!) about food with anyone who would listen. One of my favorite conversations was hearing my mom talk about her late grandmother, Jeanne-Marie, who immigrated from a small town in the Pyrenees to San Francisco in the 1920s. She was the cook to aspire to in our family.

At the ripe age of six, my eyes widened as my mom recounted the long, coursed meals Jeanne-Marie would serve — with the salad after the main, really!? Her leg of lamb was legendary, a thing of beauty, I was told. My tiny lips smacked as I tried to conjure the flavor of those succulent, garlic-studded, fatty slices of lamb. Jeanne-Marie would, apparently, even go to Golden Gate Park to forage for snails to make escargots (a "how-to" story I will admit is not on my list to write for any publications). From these stories, a seed was planted, and my love of French cooking — and ingredients — started to grow.

Many years later, I started working at Market Hall Foods, a specialty food shop in Oakland, Calif., and was introduced to a selection of French products hailing from the Basque Pyrenees. These ingredients from the southwestern corner of France, bordering Spain, brought me a taste of where my great-grandparents were from—where French and Spanish flavors blend into hearty, rustic, flavorful cooking.

Now, when I twist the lid off a jar of piment d'Espelette — a fruity, tomatoey Basque chili powder beloved for its mild, nuanced heat — and sprinkle the brick-red spice over lamb shanks, I think about Jeanne-Marie and her leg of lamb. As I sneak a spoonful of black cherry confit from the jar, my mind wanders to a simple dessert of ice cream topped with the condiment following the salad course. While I didn't have the chance to taste my great-grandmother's cooking, nor did I grow up eating purely French Basque food, these ingredients are threads that tie me to my family — I am thrilled to share a little piece of that with you.

The Basque region of France is ripe with peppers, but there is one that is prized above them all: the famous piment d'Espelette. It is so prized that it even has an Appellation d'Origine Protégée (AOP) designation (meaning it's a traditional product protected by the government). To be labeled "piment d'Espelette" it must meet strict standards, from the varietal of seed used to grow the peppers, to where and how they are grown, and even how they are dried.

Espelette peppers can be found fresh in the French Basque Country, but are usually found in dried powdered form in kitchens across the region and stateside. Brick-red in color, piment d'Espelette has a delicate fruitiness with a medium heat level, a gentle spice that lingers on the tongue. The pepper powder is used both in cooking, like my Basque Braised Lamb Shanks With Espelette and as a finishing spice over prepared dishes.

Jambon de Bayonne is a cured ham crafted in the Adour Bassin in the Pyrenees. Named after the port city of Bayonne, this beloved French ham is similar in style to Spanish jamón serrano or jamón ibérico and Italian prosciutto. This ham is so cherished that there is even a festival dedicated to jambon de Bayonne every year (in Bayonne, of course). Like piment d'Espelette, jambon de Bayonne is protected as a traditional ingredient by the government.

Jambon de Bayonne begins with local pigs that have been born and bred in the Adour Bassin. Fed on corn, the meat from these special animals is sweet, with an almost nutty fattiness. To make the ham, the legs are cured with salt from a saline spring in Salies-de-Béarn and aged for about nine months. The finished jambon is beautifully balanced — you're first met with the delicate sweetness of the meat, which opens up to subtle notes of umami, and the pièce de résistance is the fat (oui, eat the fat!) that almost melts on your tongue, leaving the faintest flavor of hazelnuts.

Serve thin slices of jambon de Bayonne on their own before the meal or as part of a cheese and charcuterie board. You can also cook with this cured meat; try finely chopping it before adding to the base of soups and stews.

France may be known for cheeses like Brie, Camembert, Roquefort, and Loire Valley goat cheeses, but the sheep's milk cheeses of the Pyrenees and French Basque Country deserve a special place at the table—and on your cheese plates.

These aged sheep's milk cheeses, like Ossau-Iraty and P'tit Basque, are semihard, with a natural rind and a supple, smooth texture. The flavor is reminiscent of browned butter and toasted, salted hazelnuts, with just a touch of fresh cream on the finish. Because sheep's milk itself has a higher percentage of fat than cow's or goat's milk, the resulting cheeses are richer, with a sumptuous mouthfeel. The flavor depends on which season the milk is from — in the spring and summer months, the sheep have access to lots of natural flora in the rolling foothills of the Western Pyrenees, so you get pleasing notes of fresh hay and grass.

Basque-Pyrenees sheep's milk cheeses make a wonderful addition to any cheese plate or board. They love just about any accoutrement, from confiture de cerises noires (Basque black cherries in syrup) and candied nuts to charcuterie like jambon de Bayonne, as well as pepper-forward condiments like piperade and sweet chile jelly made with Espelette peppers.

Cerises noires d'Itxassou are black cherries specifically grown near the French Basque town of Itxassou. Black cherry trees used to be prevalent in the area (my great-grandmother even used to hide in the cherry tree on her farm as a child). However, as time has passed, the number of cherry trees has dwindled in the area, making them even more prized and beloved. Made up of a few varieties of cherries, the cerises noires d'Itxassou are sweet and fragrant, with just enough tart acidity to balance their honeyed flavor.

You can find these French cherries fresh during the early summer months, but most often they are turned into a confiture (jam) with sugar and a touch of lemon juice, so they can be enjoyed all year long. Cerises noires are a traditional accompaniment to Ossau-Iraty cheese, as well as the star ingredient in one of Basque-Pyrenees' most well-known baked goods: Gâteau Basque, a double-crusted tart filled with pastry cream and/or cherry jam.