Anti-vax doctor, an adviser to Mike Lindell, claims COVID vaccine will "magnetize" you 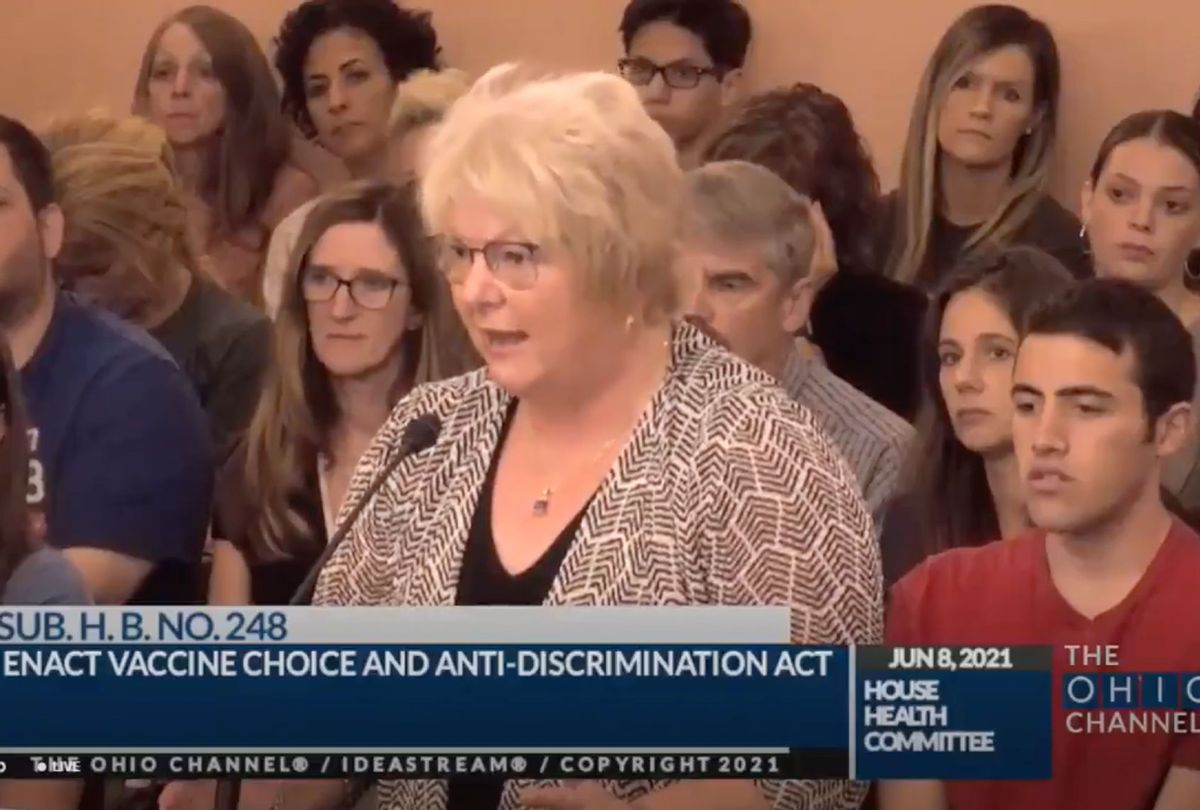 Steadfast anti-vaccination doctor Sherri Tenpenny, a confidant and adviser to MyPillow CEO Mike Lindell, aired a number of unfounded and seemingly unhinged conspiracy theories regarding coronavirus vaccines on Tuesday before a hearing held by a health committee in the Ohio state legislature.

Tenpenny's claims, which rapidly went viral on Twitter, included the suggestion that COVID-19 vaccination can render individuals "magnetized." Tenpenny acknowledged that bizarre allegation was not supported by peer-reviewed research, but said instead that she had seen such claims "all over the internet."

"I'm sure you've seen the pictures all over the internet of people who have had these shots, and now they're magnetized," Tenpenny said while voicing her support for Ohio's House Bill 248, "which includes a wish-list of items sought by vaccine opponents," according to The Columbus Dispatch. "They can put a key on their forehead. It sticks. They can put spoons and forks all over them, and they can stick because now we think that there's a metal piece to that," she added.

Testimony going off the rails now.

Tenpenny is claiming there is metal in the vaccine that causes forks to stick to your forehead. She saw videos of it on the internet, you see

Tenpenny didn't stop there, recycling another debunked conspiracy theory that particles in COVID vaccines can connect to 5G cellular towers. "There's been people who have long suspected that there's been some sort of an interface, yet to be defined interface, between what's being injected in these shots and all of the 5G towers," Tenpenny stated.

Later in the hearing came an episode the Dispatch article described as "show-and-tell":

Joanna Overholt, a registered nurse from Strongsville, defended Tenpenny's testimony and placed a key and a hairpin against her chest and neck.

"Explain to me why the key sticks to me. It sticks to my neck too. So, yeah, if somebody could explain this, that would be great," she said as the key failed to stick to her neck.

State Rep. Beth Liston, a Democrat who is also a doctor, pushed back against the claims made by Tenpenny, as the Dispatch reported. "We are hearing testimony on a bill that will lead to outbreaks of disease, and our invited 'vaccine experts' include a known conspiracy theorist talking about magnets and cell towers along with her followers," Liston said. "The only benefit of this testimony is that it exposes who exactly supports HB248: individuals with absurd, uninformed and dangerous beliefs."

Tenpenny, is a known vaccine opponent who frequently appears alongside MyPillow founder Mike Lindell on his failed Frank Speech website to expound on various conspiracy theories about the pandemic and COVID vaccines.

Been watching Frank TV and struck by how much vaccine hysteria is on there… one discussion about it suggested that the COVID vaccine was part of a mass sterilization effort https://t.co/wS4HQWFmIA

Tenpenny's supposed medical claims have been widely debunked. Reuters Fact Check reported in May: "Vaccines for COVID-19 do not contain metals or microchips that make recipients magnetic at the site of injection, physics and medical experts have told Reuters."

The 5G wireless claim has also been deemed false by medical experts, both because there are no mysterious electronic "particles" in any vaccine and because "there's no evidence that wireless communications — whether 5G or earlier versions — harm the immune system," as the Associated Press noted in April of 2020, attributing that statement to Swedish scientist Myrtill Simko, who has researched the issue for decades.