Joe Manchin and Donald Trump: The two men who threaten it all 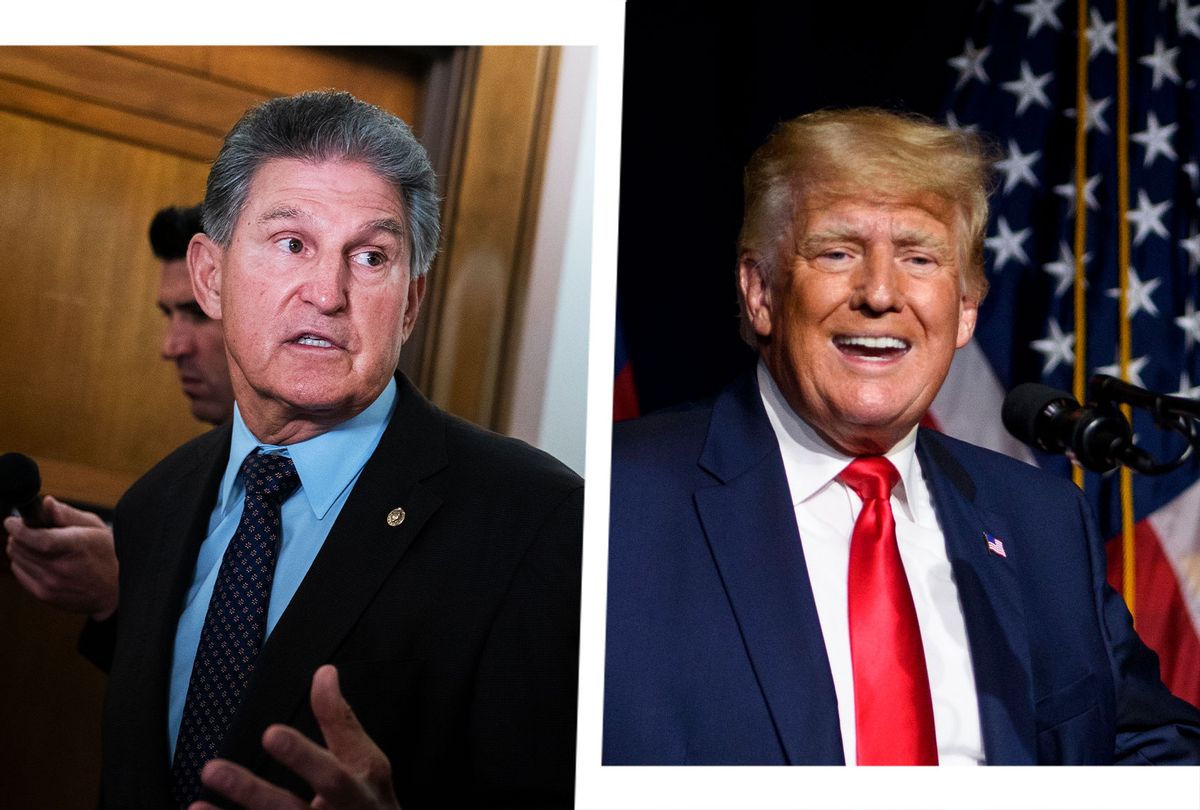 After West Virginia Sen. Joe Manchin's comments last weekend in which he refused to consider reforming the filibuster or voting to support the For the People Act, it's been very hard to avoid the dreaded thought that the 2021 Democratic agenda is already on life-support.

Sure, Senate Democrats recently managed to get a bipartisan bill passed to fund programs that increase competition with China and deal with various security threats, but that's because Mitch McConnell granted his rare dispensation since he knows such legislation is not the sort of thing that the public will see as a Democratic "win." And there was word on Thursday evening that the "Gang of 10" working on a bipartisan infrastructure bill in the Senate had come to an agreement, although early reports suggest that the climate change mitigation portion of the initiative has been jettisoned. But even as bad as such a "deal" would be, it is hard to imagine finding even 10 Republicans to vote to break the filibuster in support. Or even 50 Democrats for that matter!

Everything feels very small and insubstantial all of a sudden, which is extremely worrying.

It's hard to imagine the Democrats will be able to keep the Trumpified GOP at bay in 2022 and 2024 if they are unable to deliver more than this. Just saying you tried, kind of, isn't the most inspiring electoral message. On the other hand, it's not as if the Trumpified Republicans are in particularly good shape either. It's always tempting to see them as having some magical hold on the American public because it seems so bizarre and inexplicable that they are able to win at all. But it is important to remember that the leader to whom they are compelled to pay fealty despite losing the popular vote twice and never gaining above a 45% approval rating is making the GOP even more toxic than it was before. And many of the candidates they will be facing are more likely to be following the Marjorie Taylor Green model than the "reasonable" Republican model that might appeal to the suburban voters who could make the difference. According to the New York Times, there are a boatload of these weirdos jumping into the fray:

Across the country, a rising class of Republican challengers has embraced the fiction that the 2020 election was illegitimate, marred by fraud and inconsistencies. Aggressively pushing Mr. Trump's baseless claims that he was robbed of re-election, these candidates represent the next generation of aspiring G.O.P. leaders, who would bring to Congress the real possibility that the party's assault on the legitimacy of elections, a bedrock principle of American democracy, could continue through the 2024 contests.

One of them is a Michigan woman who calls herself the "MAGA bride," complete with a Donald J. Trump-themed wedding dress, and says it is highly probable that Trump actually won her state. A Washington state Republican candidate for governor who lost by 545,000 votes decided to drop his inane lawsuit contesting the results and decided to run for Congress in 2022 instead. They are just two among many across the country who are running on Trump's Big Lie agenda which includes support for all those vote subversion and voter nullification laws being passed by Republicans all over the country.

Considering the huge majority of Republican voters who are convinced that the Democrats stole the 2020 election from Donald Trump, the turn to conspiracy theories certainly makes sense in GOP primaries. But there are some Republicans who remember all the way back in 2012 when the GOP ran a bunch of right-wing kooks for the U.S. Senate and lost their majority. Remember Todd "legitimate rape" Akin and Sharron "second amendment remedies" Angle? Those two didn't work out so well for the GOP's play for the majority in the Senate. This time there may very well be dozens of candidates like that — many of whom endorsed by Trump himself.

For his part, Mitch McConnell is not thrilled about any of this:

The National Journal's Josh Krakauer reports that McConnell isn't the only Republican leader who is nervous about Trump's influence. He points out that if Trump were any kind of team player he would stay out of the process and just use his clout with voters to raise money and turn out voters. But that's not how Trump rolls:

[O]ut of office, he's continuing his destructive behavior, endorsing weaker candidates in contested primaries, squelching the campaigns of erstwhile allies, and elevating not-ready-for-prime-time contenders in must-win Senate contests. His erratic behavior since losing the presidential election—exemplified by his conspiracy theorizing and suppression of the GOP vote in Georgia's Senate runoffs in January, handing Democrats the majority—is only accelerating as the midterms draw closer. It's leading to increasing Republican pessimism about their chances of retaking the Senate majority next year, even as the political environment is awfully favorable on paper to the party out of power.

What a shame that would be.

As for the Democrats, there may be some hope on the electoral front. The recent special election in New Mexico to fill the seat vacated by Interior Secretary Deb Haaland offered some interesting info that relates to the extreme radicalization of the GOP. The Democrat Melanie Stansbury beat the Trump Republican Mark Moores, as expected. But she beat him by 24 points, which is more than both Haaland and Biden received in the district last November. According to Politico, both parties attributed this to the Trumpification of the New Mexico Republican party which has been turning off Independent voters for a while and failed miserably with a dishonest message calling Stansbury a "radical extremist" who wanted to defund the police.

Obviously, it's unknown if this portends a larger trend but it shocked the GOP which expected Moores to do much better than he did. Not that they can change their approach now. Their leader Donald Trump won't allow that and neither will their hardcore base.

CNN's data analyst Harry Enten pointed out that there have been a number of special elections at the state and local level that follow the same dynamic which he attributes to President Biden's popularity. While history suggests that the party in power will lose the midterms, Enten says that Biden's approval rating is the steadiest of any president since WWII and that gives Democrats a chance to hang on. It would certainly be helpful if the Senate Democrats could help out a little bit by passing some of the popular legislation he — and they — ran on last November. After all, that's one of the main reasons people support him.