The Teamsters represents more North American logistics workers than any other union, and Amazon is enemy No. 1 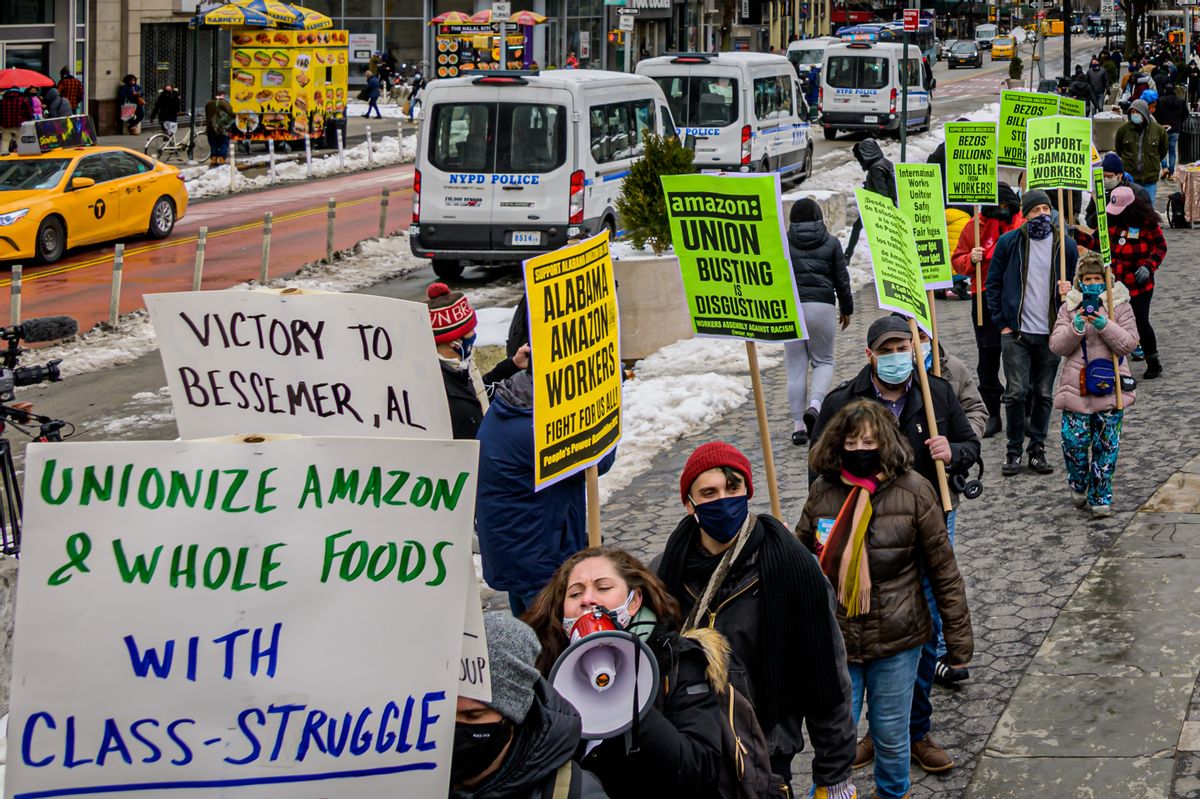 There is perhaps no clearer manifestation of how America is failing the working class than Amazon.

In the blink of an eye, Amazon has become the largest and wealthiest logistics company the world has ever seen. Millions of Americans work in warehouse, shipping and package delivery jobs, where Amazon heavily dominates its competitors. The company will soon be the nation's largest employer, redefining both the American workforce and how people shop worldwide.

Amazon claims to be innovative, but its strategies of market dominance and labor exploitation are as old as capitalism itself, and were perfected by predecessors like Standard Oil, General Motors, US Steel, AT&T, Walmart and Microsoft. My union, the International Brotherhood of Teamsters, views this as history repeating itself.

The Roaring '20s were great for those at the top, but meant massive exploitation of workers. As we embark further into the 2020s, the Teamsters will make sure that Amazon cannot repeat a history where workers suffered acutely to make ends meet and were frequently injured or even killed on the job while company executives stuffed their pockets with the profits.

Even before the 1920s, the Teamsters started building our union, which is now the largest and most powerful organization of workers in the North American logistics industry. Teamster members enjoy the best wages, benefits, and working conditions in the industry because we've battled greedy owners and the politicians they have in their pockets, both in the streets and in the workplace. As workers, we have more in common than what divides us. We speak and act collectively, and the chorus of our voices and actions is more powerful than the sum of its parts.

Amazon workers know they are the source of Jeff Bezos' billions and that because of their work he has become one of the richest people on the planet. Just as truck drivers and other logistics workers built power on their own terms 100 years ago, Amazon workers from Minneapolis to New York, from Chicago to California, are discovering their power and learning how to strategically wield that power to win their demands.

Amazon workers are uniting to improve their livelihoods, and the Teamsters are supporting them because they deserve what we have, and because we need to maintain the standards for which our members have worked so hard. Years of struggle against consolidated corporate powers have taught us that focusing on one facility at a time and depending on America's weak and hard-to-enforce legal procedures are insufficient to win against monopoly corporations like Amazon. As we saw in the closely-watched National Labor Relations Board (NLRB) election at Amazon's Bessemer, Alabama warehouse, the company is willing to violate the law and spare no expense to keep its workers from forming a union.

As Teamsters, we have been building power in the logistics industry since before meaningful labor law was enacted in this country. We fought for workers' rights to organize and build power any way we could, including shop floor strikes, city-wide strikes and actions in the streets. Building genuine worker power at Amazon will take shop-floor militancy by Amazon workers and solidarity from warehousing and delivery Teamsters.

This will take hard, but necessary work. As a union, we deeply understand and are constantly educating each other about the threat posed by Amazon. Many of our members have already experienced the pressure of longer hours and more work at their own jobs because of how Amazon is changing their industries. Some of our members have worked at Amazon previously or have friends and family who work there. We are training our members to support Amazon workers as they organize to build power across their company. The response has been amazing, but our union needs to be dedicated to this project for the long haul if we want to keep middle-class jobs in our core industries.

Later this month, delegates elected by members from all 500 Teamsters local unions will convene virtually for our 30th International Convention to set the direction of the union and nominate officers who will serve for the next five years. Unions are one of the few large civic organizations left where everyday people get to practice democracy. And given the challenges we face as a society and a world in 2021, this practice has never been more important. At this year's Convention, Teamsters will use these democratic means to fully mobilize our union against Amazon's threat to working class communities.

As is the case with our national politics, union politics can be polarizing and taxing. There will be necessary and healthy debate at the Convention, but the good news is that we have plenty of victories and defeats to learn from, and we stand on the shoulders of giants who have taken unprecedented action to build worker power throughout history.

As our union's national director for Amazon, I see that Teamster locals across the country are already stepping up to meet the challenge by engaging members, building large volunteer organizing committees, building strong community-labor alliances and integrating transformative social justice organizing into their work. This is not optional. We must expand these efforts over time because it is the only chance we have to combat the threat Amazon poses to Teamsters, our families and our communities.

There is no single strategy that will allow Amazon workers to build a strong, militant union that the company has no choice but to recognize. But it is not enough to argue about what to do— with urgency, we must dig deep to do the hard work of building worker power, to learn from successes and failures, and to keep moving forward. It is this spirit of collective struggle that is guiding workers all around the world to act — from Amazon strikes in Germany, Italy and India to general strikes in Colombia and Palestine.

The next American labor upsurge is on the horizon, but we must do the hard work necessary to make it a reality. Amazon will keep fighting workers who demand a safe workplace and a fair return on their labor, but our union and our broader movement is resilient. No company is more powerful than workers who are united and standing together, with their communities, in solidarity.

Randy Korgan is the Teamsters' National Director for Amazon.

Randy Korgan is the Teamsters’ National Director for Amazon