Are Republicans setting a trap in the Senate to kill President Biden’s agenda?

Biden's focus on bipartisanship over public policy outcomes could be leading him into a trap . . . 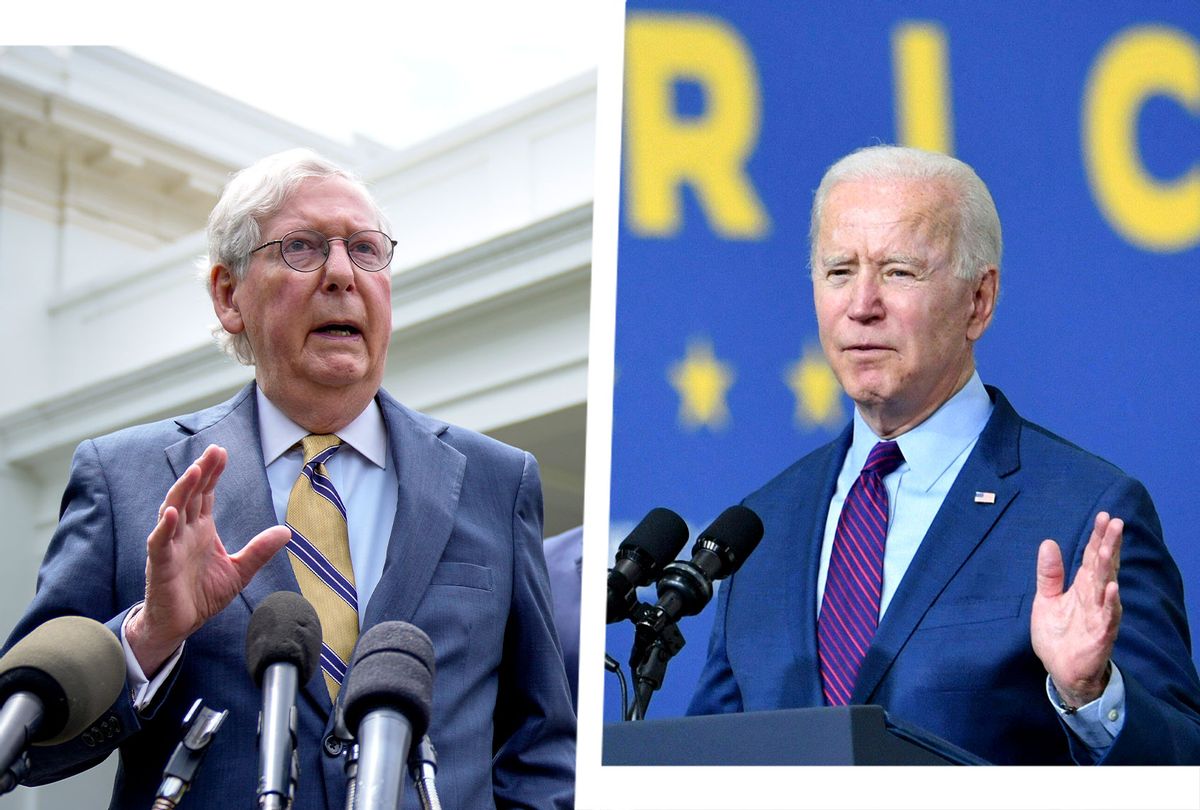 Joe Biden's focus on bipartisanship over public policy outcomes could be leading him into a trap.

"Senate Republicans are mulling support for a massive amount of new spending on infrastructure — in part because they think it'll help kill President Joe Biden's liberal agenda," Politico reported Monday. "Minority Leader Mitch McConnell has yet to tip his hand on whether he supports the bipartisan negotiations on Biden's plan for roads and bridges that are being led by Sens. Kyrsten Sinema (D-AZ) and Rob Portman (R-OH). But a growing number of Senate Republicans are betting that if a deal is reached on that sort of physical infrastructure, Democrats won't have the votes needed to pass the rest of Biden's 'soft infrastructure' priorities, such as child care and clean energy."

"Senate Minority Whip John Thune (R-SD) surmised Monday that if a bipartisan package comes to fruition, the only remaining ways for Democrats to pay for a second bill on social spending programs are tax increases — too toxic to pursue. Democrats can pass a spending bill with only Democratic votes, but they need all 50 of their members to be on board," Politico has explained.

Democrats failing to deliver could damper enthusiasm for the party during the 2022 midterm elections.

"What's at stake is perhaps trillions of dollars in spending sought by Democrats to provide paid family leave, raise taxes on corporations and act on climate change. Those policies are more likely to fall by the wayside because, though there's bipartisan hope for physical infrastructure, Democrats' more progressive priorities have no chance of attracting GOP support," Politico reported. "Progressives for weeks have urged Democrats to move swiftly and ditch Republicans in the hopes of getting the most ambitious package possible. A spokesperson for Senate Budget Committee Chair Bernie Sanders (I-Vt.) confirmed he'd oppose a bipartisan package, increasing the number of Republicans needed to sign on. But as of now, it's not clear that Biden's party has the votes to proceed along party lines while sidestepping a filibuster through the so-called budget reconciliation process, regardless of what it includes."