Who is the winner if there is no restoration of the rule of law? 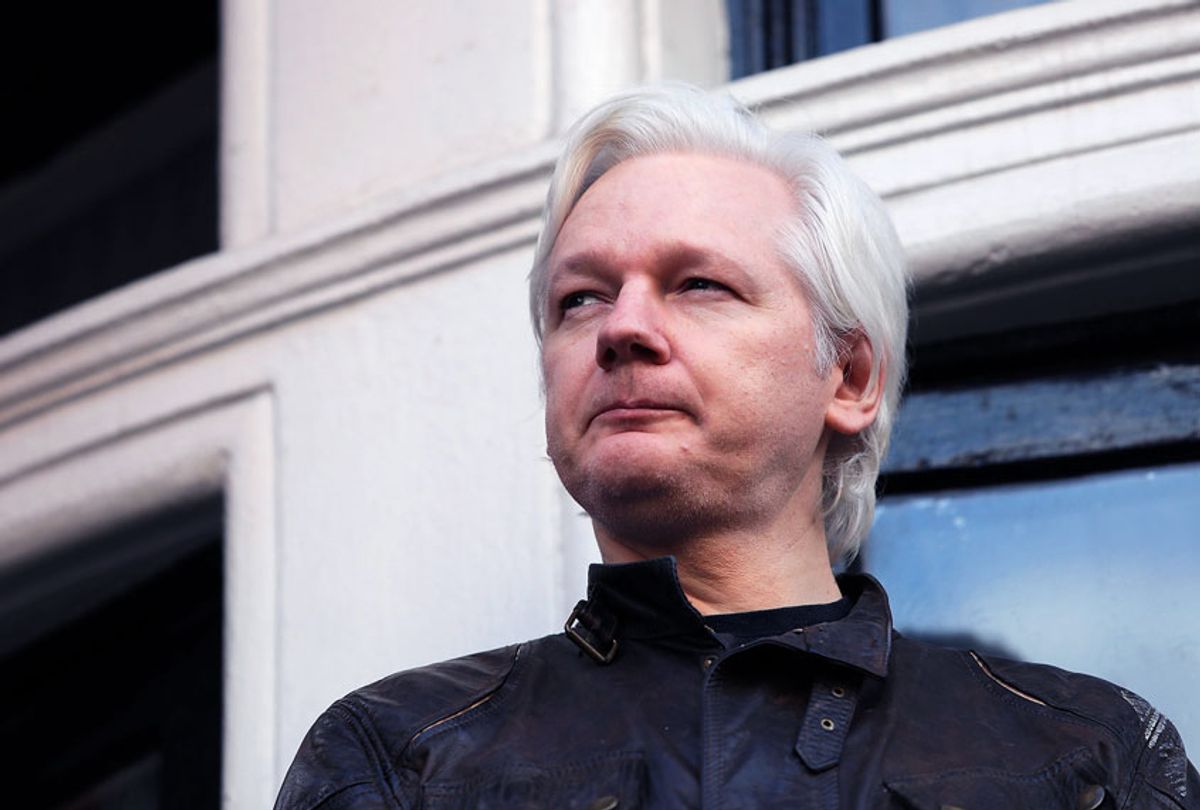 This article originally appeared at ScheerPost, adapted from a talk given by Chris Hedges at a rally on June 10 in New York. Used by permission.

This why we are here tonight. Yes, all of us who know and admire Julian decry his prolonged suffering and the suffering of his family. Yes, we demand that the many wrongs and injustices that have been visited upon him be ended. Yes, we honor him for his courage and his integrity. But the battle for Julian's liberty has always been much more than the persecution of a publisher. It is the most important battle for press freedom of our era. And if we lose this battle, it will be devastating, not only for Julian and his family, but for us.

Tyrannies invert the rule of law. They turn the law into an instrument of injustice. They cloak their crimes in a faux legality.  They use the decorum of the courts and trials, to mask their criminality. Those such as Julian who expose that criminality to the public are dangerous, for without the pretext of legitimacy the tyranny loses credibility and has nothing left in its arsenal but fear, coercion and violence.

The long campaign against Julian and WikiLeaks is a window into the collapse of the rule of law, the rise of what the political philosopher Sheldon Wolin calls our system of "inverted totalitarianism," a form of totalitarianism that maintains the fictions of the old capitalist democracy, including its institutions, iconography, patriotic symbols and rhetoric, but internally has surrendered total control to the dictates of global corporations.

I was in the London courtroom when Julian was being tried by Judge Vanessa Baraitser, an updated version of the Queen of Hearts in "Alice in Wonderland" demanding the sentence before pronouncing the verdict. It was judicial farce. There was no legal basis to hold Julian in prison. There was no legal basis to try him, an Australian citizen, under the U.S. Espionage Act. The CIA spied on Julian in the embassy through a Spanish company, UC Global, contracted to provide embassy security. This spying included recording the privileged conversations between Julian and his lawyers as they discussed his defense. This fact alone invalidated the trial. Julian is being held in a high security prison so the state can, as Nils Melzer, the UN special rapporteur on torture, has testified, continue the degrading abuse and torture it hopes will lead to his psychological if not physical disintegration.

The U.S. government directed, as Craig Murray so eloquently documented, the London prosecutor James Lewis. Lewis presented these directives to Baraitser. Baraitser adopted them as her legal decision. It was judicial pantomime. Lewis and the judge insisted they were not attempting to criminalize journalists and muzzle the press while they busily set up the legal framework to criminalize journalists and muzzle the press. And that is why the court worked so hard to mask the proceedings from the public, limiting access to the courtroom to a handful of observers and making it hard and at times impossible to access the trial online. It was a tawdry show trial, not an example of the best of English jurisprudence but the Lubyanka.

Now, I know many of us here tonight would like to think of ourselves as radicals, maybe even revolutionaries. But what we are demanding on the political spectrum is in fact conservative: It is the restoration of the rule of law. It is simple and basic. It should not, in a functioning democracy, be incendiary. But living in truth in a despotic system is the supreme act of defiance. This truth terrifies those in power.

The architects of imperialism, the masters of war, the corporate-controlled legislative, judicial and executive branches of government and their obsequious courtiers in the media, are illegitimate. Say this simple truth and you are banished, as many of us have been, to the margins of the media landscape. Prove this truth, as Julian, Chelsea Manning, Jeremy Hammond and Edward Snowden have by allowing us to peer into the inner workings of power, and you are hunted down and persecuted.

Shortly after WikiLeaks released the Iraq War Logs in October 2010, which documented numerous U.S. war crimes — including video images of the gunning down of two Reuters journalists and 10 other unarmed civilians in the "Collateral Murder" video, the routine torture of Iraqi prisoners, the covering up of thousands of civilian deaths and the killing of nearly 700 civilians that had approached too closely to U.S. checkpoints — the towering civil rights attorneys Len Weinglass and my good friend Michael Ratner, who I would later accompany to meet Julian in the Ecuadoran embassy, met with Julian in a studio apartment in Central London. Julian's personal bank cards had been blocked. Three encrypted laptops with documents detailing U.S. war crimes had disappeared from his luggage in route to London. Swedish police were fabricating a case against him in a move, Ratner warned, that was about extraditing Julian to the United States.

"WikiLeaks and you personally are facing a battle that is both legal and political," Weinglass told Assange. "As we learned in the Pentagon Papers case, the U.S. government doesn't like the truth coming out. And it doesn't like to be humiliated. No matter if it's Nixon or Bush or Obama, Republican or Democrat in the White House. The U.S. government will try to stop you from publishing its ugly secrets. And if they have to destroy you and the First Amendment and the rights of publishers with you, they are willing to do it. We believe they are going to come after WikiLeaks and you, Julian, as the publisher."

"Come after me for what?" asked Julian.

"Espionage," Weinglass continued. "They're going to charge Bradley Manning [as Chelsea was then known] with treason under the Espionage Act of 1917. We don't think it applies because Manning is a whistleblower, not a spy. And we don't think it applies to you either because you are a publisher. But they are going to try to force Manning into implicating you as a collaborator."

"Come after me for what?"

That is the question.

They came after Julian not for his vices, but his virtues.

They came after Julian because he exposed the more than 15,000 unreported deaths of Iraqi civilians; because he exposed the torture and abuse of some 800 men and boys, aged between 14 and 89, at Guantánamo; because he exposed that Hillary Clinton in 2009 ordered U.S. diplomats to spy on UN Secretary General Ban Ki Moon and other UN representatives from China, France, Russia and the U.K., spying that included obtaining DNA, iris scans, fingerprints and personal passwords, part of the long pattern of illegal surveillance that included the eavesdropping on UN Secretary General Kofi Annan in the weeks before the U.S.-led invasion of Iraq in 2003; because he exposed that Barack Obama, Hillary Clinton and the CIA orchestrated the June 2009 military coup in Honduras that overthrew the democratically elected president Manuel Zelaya, replacing it with a murderous and corrupt military regime; because he exposed that George W. Bush, Barack Obama and Gen. David Petraeus prosecuted a war in Iraq that under post-Nuremberg laws is defined as a criminal war of aggression, a war crime, that they authorized hundreds of targeted assassinations, including those of U.S. citizens in Yemen, and that they secretly launched missile, bomb and drone attacks on Yemen, killing scores of civilians; because he exposed that Goldman Sachs paid Hillary Clinton $657,000 to give talks, a sum so large it can only be considered a bribe, and that she privately assured corporate leaders she would do their bidding while promising the public financial regulation and reform; because he exposed the internal campaign to discredit and destroy British Labour Party leader Jeremy Corbyn by members of his own party; because he exposed how the hacking tools used by the CIA and the NSA permits the wholesale government surveillance of our televisions, computers, smartphones and anti-virus software, allowing the government to record and store our conversations, images and private text messages, even from encrypted apps.

Julian exposed the truth.  He exposed it over and over and over until there was no question of the endemic illegality, corruption and mendacity that defines the global ruling elite.  And for these truths they came after Julian, as they have come after all who dared rip back the veil on power.  "Red Rosa now has vanished too. …" Bertolt Brecht wrote after the German socialist Rosa Luxemburg was murdered. "She told the poor what life is about, And so the rich have rubbed her out."

We have undergone a corporate coup, where the poor and working men and women are reduced to joblessness and hunger, where war, financial speculation and internal surveillance are the only real business of the state, where even habeas corpus no longer exists, where we, as citizens, are nothing more than commodities to corporate systems of power, ones to be used, fleeced and discarded. To refuse to fight back, to reach out and help the weak, the oppressed and the suffering, to save the planet from ecocide, to decry the domestic and international crimes of the ruling class, to demand justice, to live in truth, is to bear the mark of Cain. Those in power must feel our wrath, and this means constant acts of mass civil disobedience, it means constant acts of social and political disruption, for this organized power from below is the only power that will save us and the only power that will free Julian.  Politics is a game of fear.  It is our moral and civic duty to make those in power very, very afraid.

The criminal ruling class has all of us locked in its death grip.  It cannot be reformed.  It has abolished the rule of law.  It obscures and falsifies the truth. It seeks the consolidation of its obscene wealth and power. And so, to quote the Queen of Hearts, metaphorically of course, I say, "Off with their heads."