"There is no shame or blame in victimhood": "Cruel Summer" boss on grooming & that finale twist 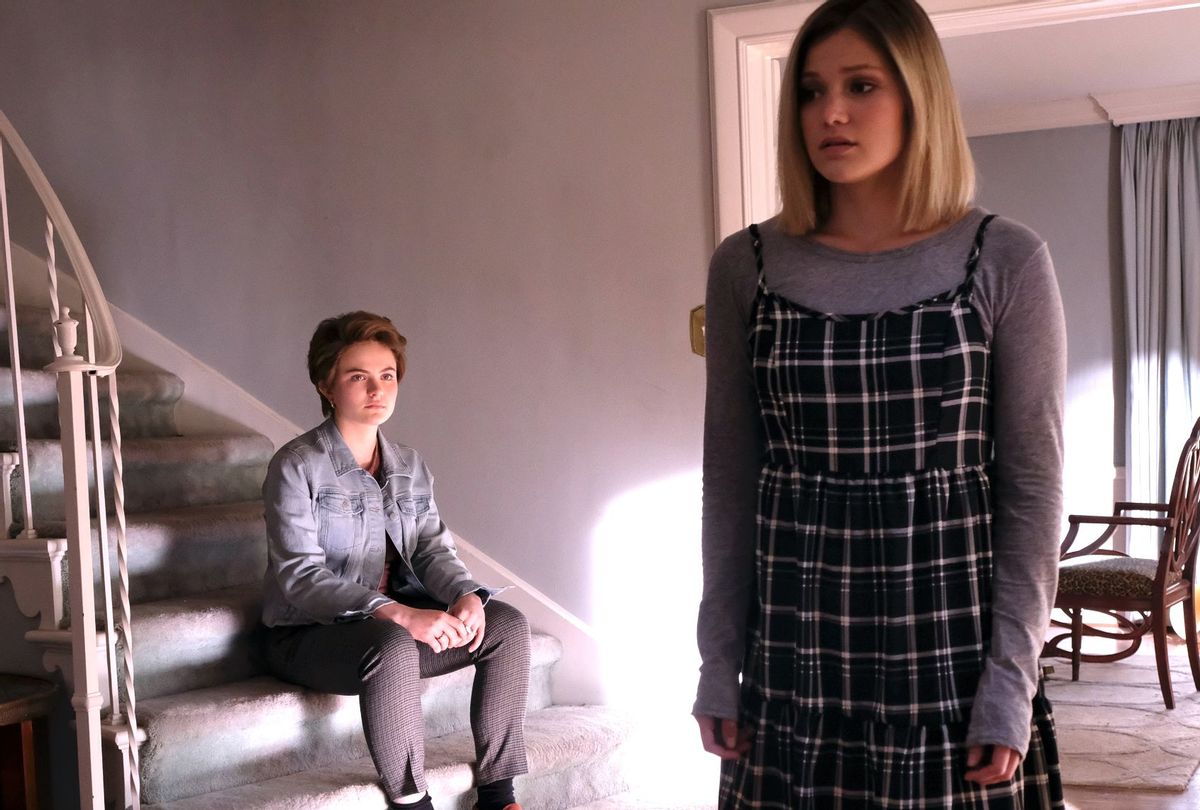 The folowing contains spoilers from the Season 1 finale of "Cruel Summer," including the ending.

Young adult dramas that don't hypersexualize their teenage girl leads, oversimplify teenagers' lives, or throw in romanticized sexual relationships with teachers are a rare breed. Refreshingly enough, Freeform's "Cruel Summer" (which streams on Hulu next day) delivers all this and more.

From the same network that once brought us "Pretty Little Liars," a show that glorifies the forbidden "love story" of a male teacher and his teenage student, "Cruel Summer" is an entirely different kind of show, and its explosive popularity has already led to its renewal for a second season. The show has also been widely praised for its accurate portrayal of grooming — when an older person targets an underage person by befriending them, with the goal of having a sexual relationship.

Taking place over the course of three consecutive summers, the mystery series about two teenage girls examines how they deal with life-changing events from 1993 to 1995. Popular girl Kate Wallis (Olivia Holt) had gone missing for several months, and later it's revealed she was imprisoned in the basement of high school assistant principal Martin Harris (Blake Lee), with whom she had a romantic relationship. After her rescue, it's revealed that she had gone to Harris "willingly," seeking safety after an explosive fight with her mother, before he turned on the teen when she tried to leave.

Meanwhile, over the course of Kate's disappearance, Jeanette Turner (Chiara Aurelia) had gone from socially awkward teen to essentially becoming the new Kate, right down to claiming Kate's best friends and boyfriend. That all comes crashing down, however, when Kate insists that during her captivity, Jeanette saw her and did nothing to help her. As a result, Jeanette becomes a pariah, leading her to sue Kate for defamation.

In the finale, a case of mistaken identity appears to show that it wasn't Jeanette who Kate saw when she was imprisoned. All seems to be neatly and tidily resolved . . .  until the jaw-dropping last moments of the episode, taking viewers back to Kate's captivity in 1994 when we see what really happened: Jeanette breaks into the house, hears Kate scream for help and smiles while doing nothing to help – before the show cuts to credits.

Salon spoke to showrunner Tia Napolitano about Season 2, the show's careful approach to Kate and Martin Harris' relationship, victim-blaming, and, of course, those shocking final seconds of the finale, that not even the most dogged Reddit sleuths saw coming.

So, "Cruel Summer" has been renewed for a second season — very exciting! Given some of those shocking ending twists, what do you envision for Season 2 that you can share with fans at this point?

We really just started, so I don't know anything about Season 2. I know we talk a lot about how Season 1 had this untie-able knot, where we set ourselves up with this impossible situation that Kate is telling her truth, and Jeanette is telling her truth, and they can't possibly co-exist. And we found our way to what we think is a really interesting way out of that mystery that gives you every piece of the puzzle. So we will aim to do that again, and be able to tell important issues, like grooming in Season 1, and have some social messaging and exploration in there, too.

What makes the show really unique from a lot of other stories and real life is it focuses on young women's credibility without comparing it to a man's — especially since Martin is dead, and not the one refuting Kate. Was this a deliberate decision to center the show around the conflict between Kate and Jeanette's credibility, rather than including a man's perspective, as we often see onscreen and in real life?

It's an area that I think all women think about, and we see it in the media, women's credibility being questioned left and right. It's our burden always to face that, and it's infuriating, and it's maddening, and to live with two people going through that was something that I felt was important to show.

"Cruel Summer" has received widespread praise for its accurate portrayal of grooming, and not romanticizing an underage relationship. Of course, this is an incredibly sensitive issue area that could have been a risky project if not done right — why was telling this story worth taking that risk for you?

Telling any worthwhile story is worth the risk. It's a matter of someone taking the responsibility to do it right, do their research — we consulted with Hollywood Health & Society, we had a therapist who was also a writer as one of our writers on staff, we did a lot of research. We looked at projects that maybe missed the mark, and tried to do better.

Throughout the show, on top of the trauma Kate endured, we see her struggle to trust and forgive herself, because she knows she isn't a "perfect" victim. Over time, we see her process this, move forward, and even find new love. What do you hope survivors and anyone who might blame themselves for their trauma are able to take away from Kate's story?

That's a really important question. I would say there is no shame or blame in victimhood. The victim is never at fault, very simply.

The accuracy of how "Cruel Summer" portrayed the dangers of grooming and underage "relationships" has sparked a lot of conversation about how previous shows have romanticized or glorified underage relationships. Were there any shows or stories you looked to for inspiration or as cautionary tales for how you did not want to portray Kate and Martin's relationship?

I actually stayed away from looking at other projects in that area. I think we wanted to do it our way, and I didn't want to be influenced one way or another by comparing us.

The love and gentleness of queer couples in this show — Vince and Ben (Allius Barnes and Nathaniel Ashton), and later Kate and Mallory (Harley Quinn Smith) — are such a bright spot in an otherwise pretty grave show. Why was it important to inject that comfort and joy in Kate's life, and show Ben and Vince come back to each other even knowing the risks?

I wanted "Cruel Summer" to be a show that talked about important issues with a lot of care, but also, show a world that you want to return to week after week. We weren't interested in relentless trauma, relentless agony and pain. That was not of interest to me.

And I wanted the characters who go through so much, especially Kate, to have joy, just as a character, for her to have a little happy ending, a bright spot, scenes that put us at ease, let us breathe a little after all we've been through as the audience.

OK, let's talk about those shocking ending twists. First, we learn who "Annabelle" is when Martin takes out the gun, at first presumably to kill himsel. Even after Kate shoots him, she says she stayed by his side all night. What does this memory show about the depths of Martin's manipulation of Kate? And what does Kate's reaction to killing him reveal about the complicated ways victims may feel about their abusers?

Kate says, I think in a voiceover in that scene, that she felt paralyzed without him, and I think that's the absolute truth. When someone's been controlling everything you do, down to when you eat and get water, he's still the one who keeps the electricity on and the roof over her head, in the worst of ways, and that is a prison. To have that person leave, she's been on autopilot in someone else's care for nine months. This switch — she freezes, and has to process everything that's happened, that's now over, and what does walking out the door look like for her. She's processing all of that.

So, there were some pretty big warning signs about who Jeanette really is, prior to those last 20 seconds — namely, the way she seems to victim-blame Kate upon discovering Kate went to Martin willingly, the ease with which she lies about repeatedly returning to Martin's house, the small spark of joy she seems to get when she first hears Kate is missing. Is there a deeper message here about not believing survivors, and lack of accountability for those who harm them? What was behind this shocking choice to turn the show upside down in the last seconds?

"Cruel Summer," as much as it's a psychological thriller, it's also a character study. I love the show has scenes where we live alone with these characters, we see them looking in a mirror or making choices when it's only them, or watching the news, and kind of are able to get inside their brain.

I think people take different things away from what they've seen of Jeanette, and to me, she is a person who made a bad decision that spiraled out of control. It was a terrible decision, but more so than her being a sociopath or psychopath, I think it's something she might really harbor guilt about, and compartmentalize somewhere within her. The answer is no, I don't think there's an overarching message wrapped up in that scene of Jeanette.

"Cruel Summer" was a very interactive show, in that social media and the internet were constantly discussing it. Did you have any favorite fan theories, stories or reactions?

I read some, I haven't seen all of them because there are so many, which has just blown me away and really humbled me. I'm just so grateful for the fans – they're amazing! I love how fiercely loyal they are, the way they'll defend Kate and Jeanette, and Mallory, and Vince — it's like they're defending a member of their family. That, I just love that people go hard for our characters on a multitude of sides, and it's very varied, there hasn't been one singular fan response, which is what we were hoping for, which is great.

I'm just proud that this is a show where we talk about it resonating with people, and I'm proud that it's a show that gives these two young women a microphone, and private moments. We aimed to make them complex, so when we go home with them, they aren't a trope, they aren't simple, they have a rainbow of emotions. I think that's resonated with audiences and I'm really proud of it.