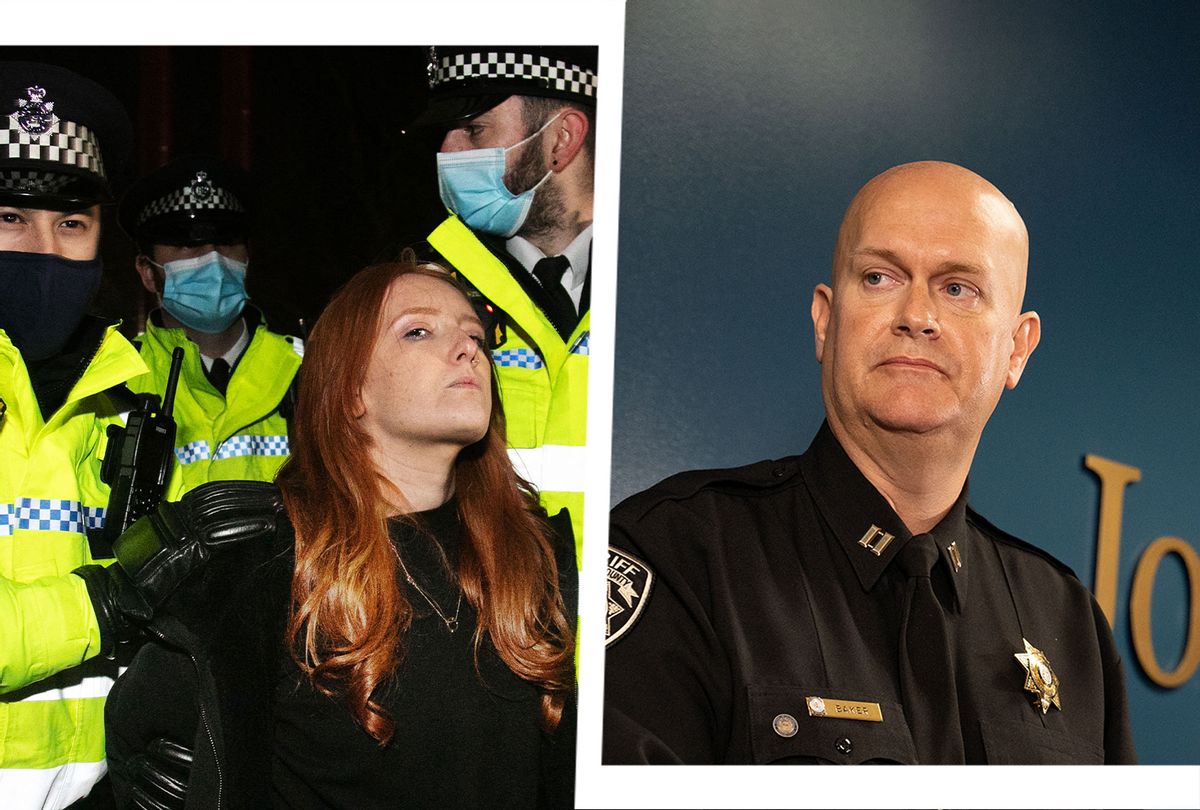 Hundreds of people gathered at a peaceful vigil for Sarah Everard on Clapham Common in South London on the 13th of March 2021, London, United Kingdom. The vigil was not sanctioned by police because of Covid restrictions and the police decided to arrest a number of people in an attempt to end the peaceful and highly emotional vigil. | Captain Jay Baker, of the Cherokee County Sheriff's Office, speaks at a press conference on March 17, 2021 in Atlanta, Georgia. (Photo illustration by Salon/Getty Images)
--

"Yesterday was a really bad day for him, and this is what he did."

Only a few hours after arresting the 21-year-old suspected shooter alleged to have gunned down eight people near Atlanta, Cherokee County sheriff's deputy Captain Jay Baker appeared to offer a sort of rationalization of the suspected motive for the murderous rampage. "He was pretty much fed up and had been kind of at the end of his rope," Baker said Wednesday during a press conference.

"He" is alleged killer Robert Aaron Long and "what he did" was murder eight innocent people in cold blood during a shooting rampage across three Atlanta-area spas on Tuesday. Long, according to Baker, claimed to be suffering "sex addiction," and "sees these locations" as "a temptation for him that he wanted to eliminate."

Baker framed his comments as merely passing along the information gathered in interviews with Long. Feminists, however, exploded in outrage, understandably seeing Baker's talk about a "bad day" as lending sympathies to the struggles of Long. It was doubly troubling that Baker cited "sex addiction," which is often what misogynists — see Harvey Weinstein — self-diagnosis themselves with to evade responsibility for predatory and violent behavior towards women. The officer's comments expose the dangers of this "sex addiction" talk, showing how it often reduces women to mere objects or "temptations" to "get rid of," as if they are bags of heroin or bottles of booze instead of human beings with lives and families of their own.

Baker also added that, even though six of the eight victims were Asian women, Long insisted that the shootings were not "racially motivated," another claim the officer was reasonably criticized for taking at face value. Asian women have been subject to generations of sexual objectification and demeaning stereotypes demanding compliant, submissive behavior from them. Sure enough, it was soon revealed that Baker had previously shared anti-Asian memes on social media, casting doubt on his ability to fairly suss out what is actually "racially motivated."

The entire press conference was a chilling reminder that, despite everything that's happened in the past few years — Donald Trump's "grab 'em by the pussy" tape, the Women's March and the #MeToo movement — women are still all too often the ones blamed when men commit violence against them. It brought to mind "The Ripper," a recent Netflix documentary about the social and political fallout from the series of murders committed in the late 70s by Peter Sutcliffe, deemed the "Yorkshire Ripper" by the British press. The documentary gives air to long-standing criticisms of law enforcement for failing to catch Sutcliffe for five years, despite interviewing him as a potential suspect nine times. The documentary, quite reasonably, posits that victim blaming is the reason for police failures.

Detectives attached themselves early on to the idea that Sutcliffe was motivated by a moralistic vengeance against sex workers, causing them to pay less attention to evidence from cases where victims, many of whom survived, were not sex workers. Why? Because, frankly, it was easier to blame the victims for their supposed "bad" choices than to grapple honestly with the prevalence of misogynistic attitudes that the police themselves share. Indeed, police at the time shifted the responsibility for preventing murder onto the women, telling them to stay at home, instead of going out at night. Not only was this not a real solution — many women, including sex workers, have to go out at night to make a living — but it was also, quite reasonably, viewed by feminists as male authorities exploiting the situation to deprive women of their personal freedoms.

That happened 40 years ago, but a similar situation again erupted in Great Britain just this month, this time in London.

Wayne Couzens, a 48-year-old Metropolitan police officer, has been charged with the kidnapping and murder of 33-year-old Sarah Everard, whose body was found earlier this month, a week after she disappeared while walking home at night. London police had reacted to Everard's disappearance by going door to door to warn women not to go out at night, a direct echo of the paternalistic, victim-blaming response that drew so much criticism during the Sutcliffe murders. Women responded now as they did then, however, by protesting in the streets, holding nighttime vigils to mourn Everard and demand accountability from police. This is how the police reacted:

The excuse for the crackdown was that the vigils were restricted because of COVID-19. Many feminists rejected this, however, insisting that it instead a matter of the male-dominated police force and government once again using male violence as an excuse to deprive women of basic freedom of movement. That impression was reinforced by a proposal offered by Conservative Prime Minister Boris Johnson to put plainclothes police officers in nightclubs and bars to "protect" women. While the majority of British poll respondents — especially older ones — like this idea, the grim reality is that this might turn out to just be another situation of using male violence against women as an excuse to increase male surveillance over women. Feminist politicians, in contrast, have suggested more male accountability is the right response, suggesting such reforms as classifying misogynist violence as a "hate crime."

Sociologists often distinguish between "benevolent" sexism, which is often expressed in terms of "revering" and "protecting" women, and "hostile" sexism, commonly called "misogyny," or the hatred of women. It's important to understand, however, that they are two sides to the same coin. Women who accept and submit to male control are rewarded with the condescending "protection" of benevolent sexism, but women perceived to violate the strict rules of proper feminine behavior are all too often attacked for it. In both cases, when men hurt women, it's the victims who are blamed — for going out at night, for being sex workers, for being "tempting," you name it. Benevolent and hostile sexism work together in a good cop/bad cop routine, both aiming to keep women under male control.

After Baker's "bad day" comments during Wednesday's press conference, Atlanta Mayor Keisha Lance Bottoms pushed back, saying, "We are not about to get into victim blaming, victim shaming, here" and noting that the spas that were targeted "are legally operating businesses that have not been on" the radar of law enforcement.

It's a sticky problem because it shouldn't matter if the victims of misogynist violence are sex workers or not. Even asking the question is a form of victim blaming, as it focuses attention on the victims and away from the actual cause of the violence, which is misogyny. The notion that women can even meaningfully decipher a set of rules and expectations to follow that will keep them safe is not only unfair, it's a lie. Long appears to have lashed out at spa workers and was apparently considering moving onto workers at a porn shop, blaming them for supposedly being too available to his sexual desires. But recent "incel" murderers, such as Elliot Rodgers or Alek Minassian, blamed women for not being sexually available enough — a complaint that all too many right-wing pundits, like Ross Douthat of the New York Times or sexism guru Jordan Peterson, were happy to amplify. Women are told to stay at home to avoid violence, but, as philosopher Kate Manne reminded us in the Atlantic, the vast majority of violence women experience at male hands is from domestic partners or family members.

You can be sexually available or closed off, go out at night or stay in. It doesn't matter. Male violence is everywhere. It is not caused by women being a "temptation." It's caused by men who want to dominate and control women. Unfortunately, as Baker's ugly press conference Tuesday showed, the police all too often share a worldview with the men who are violent towards women. Baker came off as a person who saw the world from Long's point of view, where spa workers are a "temptation" instead of women just trying to make a living, where sexual objectification of Asian women is somehow "not racist", and where women are blamed for men developing distorted and violent sexual urges. Men still control our society and men don't want to take responsibility for male violence. Until at least one part of that equation changes significantly, the scourge of misogynist violence is unlikely to go anywhere.