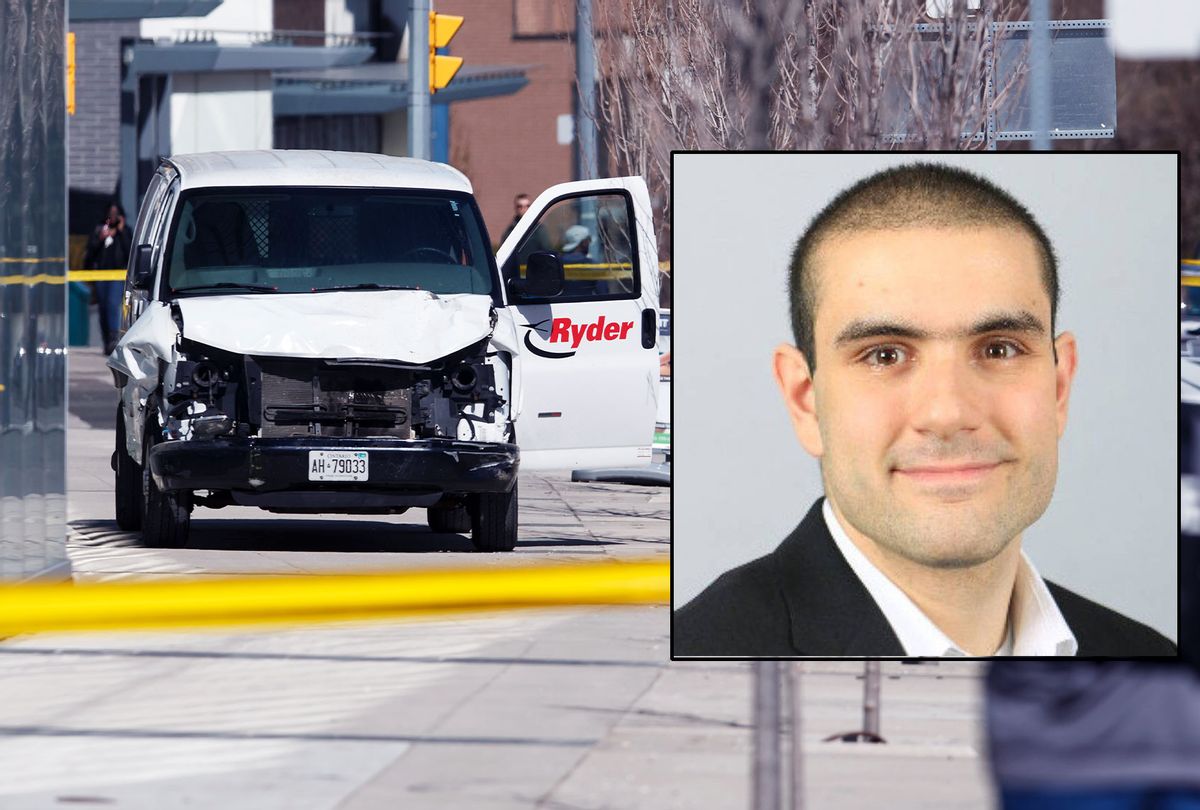 Alek Minassian, in custody for driving the van involved in a collision that injured at least eight people at Yonge St. and Finch Avenue on April 23, 2018 in Toronto, Canada. (Photo illustration by Salon/Getty Images/Linkedin)
--

Last week 28-year-old Alek Minassian, a Canadian software and mobile app developer, was found guilty of killing 10 people in 2018, when he intentionally drove his van into a crowd of pedestrians in a commercial district in Toronto. The fatalities included eight women and two men ranging in age from 22 to 94,  while sixteen other people were injured. Minassian's social media posts immediately prior to the murders give an insight into his motive: in a statement that he posted on Facebook minutes before the attack, he identified himself as an "incel," shorthand for "involuntarily celibate." As Minassian wrote: "the Incel Rebellion has already begun!"

As my colleague Mary Elizabeth Williams wrote in 2018, the incel movement is rooted in greivances related to sex; specifically, incels often feel angry "when women do not behave in a sexually conciliatory way toward them" because "they don't see sex as a mutually pleasurable experience but as a reward they have been deprived of." Of course, being bitter at women for not sleeping with you is a poor justification for mass murder, and Minassian nor his lawyers opted not to justify his rampage for those reasons. Rather, Minassian and his team have forged an entirely novel excuse: he is autistic.

As a psychiatrist who testified for the defense wrote in a report he submitted to the court, "despite the fact that [Minassian] was not psychotic, his autistic way of thinking was severely distorted in a way similar to psychosis." The court emphatically rejected this argument.

I should mention that I am autistic myself, and have written extensively about life on the spectrum. My outrage about Minassian's excuse — and gratitude toward the Canadian court which snubbed it — is very much personal. And I am not alone in my community. As Temple Grandin, a renowned scientist and autism activist, told me in an email: "Autism should never be used as a defense for deliberately committing a serious crime such as murder. Autistic people are very capable of rational thought and knowing the difference between right and wrong."

Grandin and I were hardly the only austistic individuals to feel outraged. At the time that Minassian began using his "I did it because I'm autistic" defense, Autism Canada issued a statement saying "these claims are wholly unsubstantiated, merely speculative, and made carelessly without any published evidence proving autism, on its own, is a risk factor for becoming violent against other people." They added that "when researchers consider other psychiatric disorders as a risk factor for violence, in particular ADHD and Conduct Disorder, any association with autism is NOT statistically significant." Autism Ontario issued a similar statement: "In reality, people on the autism spectrum and with other disabilities are much more likely to be victims of crime, rather than the perpetrators. The myth that autism causes criminal behaviour is exactly that: a myth."

It is not surprising that, when searching for a way to excuse his behavior, Minassian would glom on to autism. To understand why, though, it is first important to comprehend the nefarious world of incel ideology.

Involuntary celibate culture is defined by hatred of women. The Southern Poverty Law Center lists incel beliefs as a "male supremacist" ideology, noting the often violent tendencies of both incels specifically and other men who claim they have a right to women's bodies — from pick-up artists to mass murderers who denounced their own sexual frustration (like George Sodini, who killed three women at a Pittsburgh gym) or women's rights (like Anders Behring Breivik, who killed 77 people in Norway while denouncing feminism and "divorce on demand"). Yet incels have become particularly conspicuous in part because they have their own cult-ish lingo which has leaked into mainstream meme culture. "Chads" are desirable and sexually successful men, "Stacys" are desirable and sexually successful women and "Beckys" are less attractive but still desirable and sexually successful women. Non-incel, average looking men are "normies," people who have embraced their values have taken the "red pill"; and people on the autism spectrum are "Aspies" (short for Asperger's Syndrome). Yet the shared grievance at the heart of self-identified incel culture is the belief that they are victims because women they consider attractive do not want to have sex with them.

It cannot be stressed enough that self-identified incels have been allegedly linked to numerous acts of violence, from a murder in Toronto and a shooting spree in Arizona to Elliot Rodger's rampage in California in 2014, during which a college dropout went on a high-profile killing spree. (There have been conflicting reports on whether Rodger had autism.) It is reasonable to say that, while not all incels are violent, incels' hate for women makes them capable of violence. This is true in the same way that a member of the Ku Klux Klan or the Nazi Party, though not automatically violent, has such a hateful worldview that it is not surprising if one of them commits violence.

This brings us back to Minassian's misogynistic violence and why he used autism to try to get away with it. Incel prejudices about autism amount to something of a love-hate relationship. On the one hand, many incels either identify as or express sympathy for autistic individuals, claiming that they are more likely to struggle to find romantic partners; in that, perhaps some see solidarity. At the same time, there is a tremendous amount of internalized self-hatred among self-identified autistic incels, as well as a tendency to belittle autistic people in general. One report in Spectrum News discovered that incels found various ways of attributing their lack of success with women to being autistic, or at least claiming that autistic men struggle more.

Yet because incels are also prone to lauding strength and loathing weakness, many feel contempt or ridicule for people who are on the spectrum.

"In pop culture, autism is often reduced to very stereotypical 'geeky' behavior," Jude Ellison S. Doyle, author of "Dead Blondes and Bad Mothers: Monstrosity, Patriarchy, and the Fear of Female Power" and "Trainwreck: The Women We Love to Hate, Mock, and Fear... and Why," told Salon by email. "That's a double-edged sword. Incel communities are next door to organized fascist and white nationalism movements, and if someone shows those stereotypical signs of being autistic, that sets off the typical bully's instinct to torment the most vulnerable person in the room. It also sets off the eugenicist thinking that says people with disabilities aren't worthy of life. There's exceptionally violent ableism in these communities."

None of this means that autistic people do not struggle with dating. Since dating requires strong social skills — as does applying for and holding down a job, developing friendships, managing mundane day-to-day interactions and many other things — being autistic creates very real difficulties. Yet those difficulties are born of broad social intolerance toward neurodivergent behavior, not because of anything involving women as a group or feminism an an ideology. (I should note that, as an autistic person, I am currently in a relationship and have had several past relationships... and I have also struggled with romantic relationships, as well as virtually every other kind of interpersonal interaction.)

What's more, when incels mix their supposed sympathy with and/or self-identification as autistic with flagrant self-loathing, they make it clear that they are utilizing bitter stereotypes rather than coming from a place of compassion and scientific understanding.

In addition, incels who use autism as an excuse for violent behavior do so for the same reasons that men in general will try to pass the buck after harming women — because we live in a patriarchal society.

"This is part of a larger pattern of people looking for any excuse to look away from the misogyny that inspires so much male violence," Salon's Amanda Marcotte, who has written extensively about women's rights, says. "We see this all the time with rape and domestic violence — people grasping for any reason except that the perpetrator wants to dominate women for the reason that he committed the crimes he did."

There are also self-proclaimed autistic incels who, because they are white and male, have a level of privilege that they take for granted. (Minassian, for what it's worth, was half-Armenian and half-Iranian.) As with so many other experiences in our society, race intersects with what it is like to be autistic.

"I can't help but point out something that I immediately thought of when I learned of this situation, and that's the fact that even being able to debate this concept is indicative of the fact that White Autistics such as the perpetrator live in a completely different world than Autistics of color," Morénike Giwa Onaiwu, author, autism activist and former chair of the Autism and Race Committee for the Autistic Women's Network, told Salon by email. "You see, if the perpetrator had been my Black Autistic son or, perhaps, my Black intellectually disabled son, he wouldn't be alive to ever have a trial to be found guilty of murder in the first place. The police would have shot his Black behind dead, and no one would be debating whether or not 'autism' or 'disability' had anything to do with it."

Minassian's actions were entirely his fault. He murdered innocent people because he embraced a hateful ideology.None of that can be attributed to his autism. More likely, he is just an evil person.