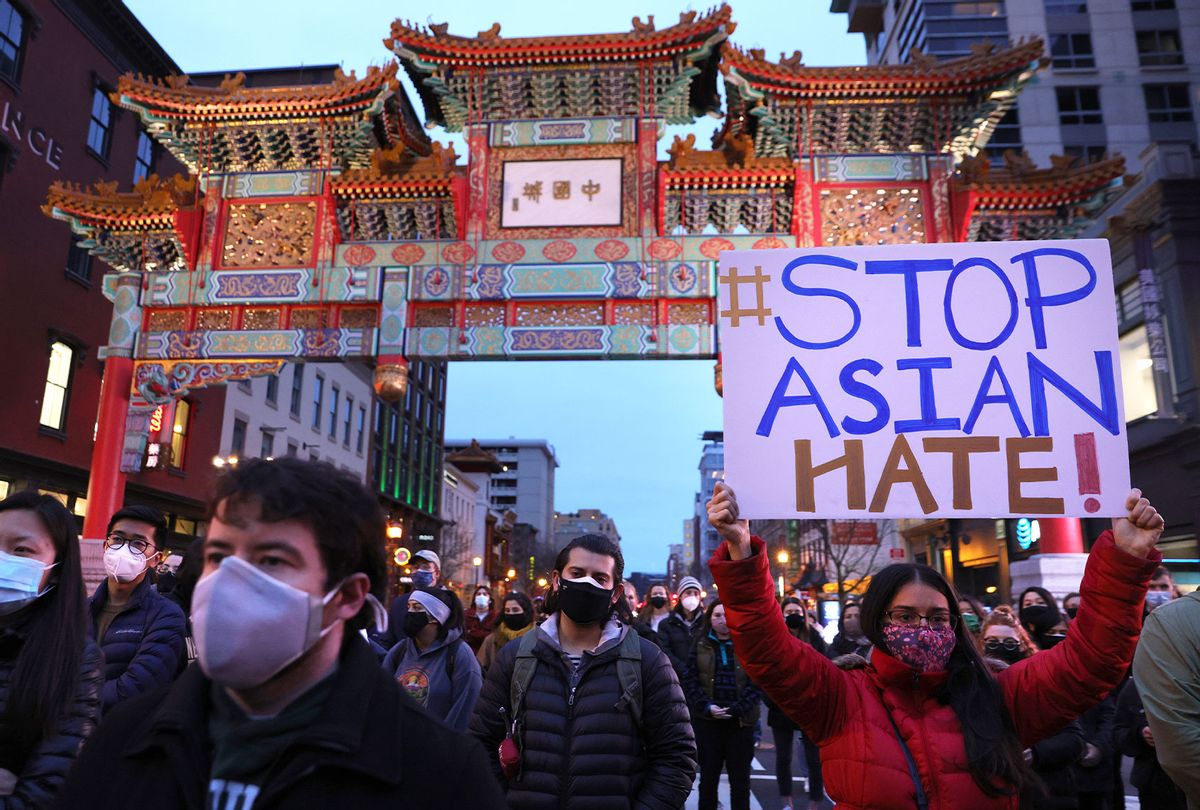 Activists participate in a vigil in response to the Atlanta spa shootings March 17, 2021 in the Chinatown area of Washington, DC. A gunman opened fire in three spas in the Atlanta, Georgia area, the day before killing eight people, including six women of Asian descent. (Alex Wong/Getty Images)
--

A man has been charged with murder following Tuesday's shootings in three Atlanta-area massage parlors, which left eight dead and one injured. Now some are calling for the alleged shooter to be charged with a hate crime.

The twenty-one-year-old suspect, Robert Aaron Long of Woodstock, Georgia, faces several counts of murder in addition to aggravated assault. Officials have not yet been able to confirm whether the attacks were racially motivated. However, Long reportedly confessed to the murders.

Cherokee County Sheriff Frank Reynolds said that Long may have been a patron of the spas and cited a supposed sex addition. "He apparently has an issue," said the sheriff, "what he considers a sex addiction, and sees these locations as a temptation for him that he wanted to eliminate."

Massage parlors are known to occasionally offer prostitution services, but there is no indication that this is the case for any of the targeted spas.

"These are legally operating businesses that have not been on our radar," said Atlanta Mayor Keisha Lance Bottoms. The city, she added, would not participate in any kind of "victim shaming, victim blaming."

Bottoms said that the shooter was en route to Florida to continue his killing spree.

On Tuesday, Baker noted, "Yesterday was a really bad day for [Long] and this is what he did." The Captain's remarks drew widespread outrage over what appeared to be law enforcement lending a sympathetic ear to the killer.

"Whether it's senseless violence we've seen play out in our streets, or more targeted violence like we saw yesterday. A crime against any community is a crime against us all," Bottoms said in a Thursday morning news conference.

The shootings unfolded at 5pm on Tuesday night in Acworth, just outside of Georgia, where Long targeted Young's Asian Massage. Two victims were pronounced dead at the first location. One was injured, and three were rushed to the hospital, where two later died. Long later targeted Gold Spa in northeast Atlanta ––  where he shot three women –– as well as Aromatherapy spa, where he killed another.

After a brief manhunt, Long was arrested around 8:30pm. WSB-TV confirmed that the weapon Long used in the shootings, a 9mm, was purchased on the day of the rampage.

Six of the victims were Asian women, and the South Korean Foreign Ministry confirmed that four of them were Korean.

The shooting comes as the Asian American community faces a wave of anti-Asian hate crimes in the wake of the pandemic, the first case of which was identified in Wuhan City, China.

"When we learned about this last night, we were horrified and the sinking feeling that I had was this had to be a crime related to AAPI hate," Georgia State Rep. Bee Nguyen, a Democrat, told CNN on Wednesday. "As we have learned details of the event unfold, I still believe that this is a racially-motivated crime. In this particular case, where the victims were Asian women, we see the intersections of racism, xenophobia, and gender-based violence."

Mayor Bottoms suggested that it would be "it would be appropriate" if Long were charged with a hate crime.

"I think whatever the stiffest, most appropriate charges there are, this guy should face those charges," Bottoms replied during the interview on the "Situation Room."

"In Georgia, you can be charged with a hate crime. It covers a variety of areas, and I personally think it would be appropriate, but I will defer to the prosecutors to make that determination."