Could a human actually be engulfed by a whale? A marine biologist weighs in

A fisherman reports being engulfed, then spat out, by a whale. A whale expert describes what that would be like 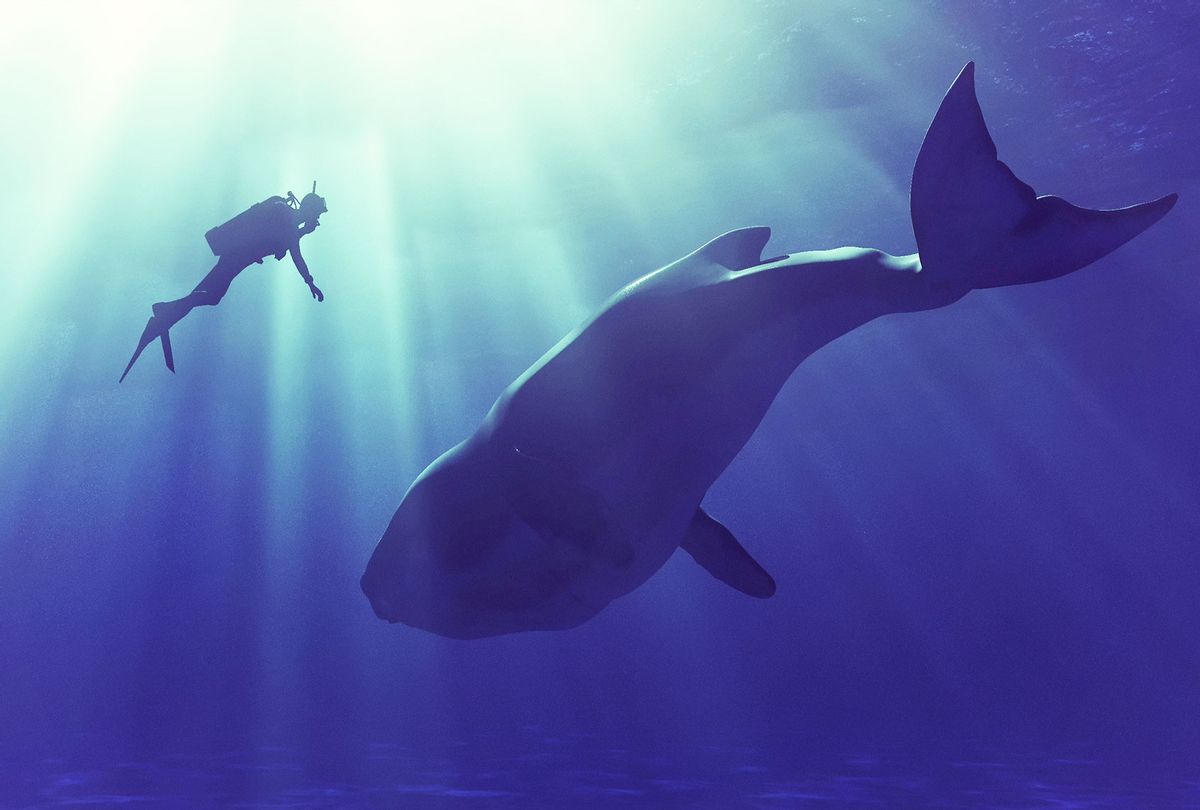 For the record, the diver wasn't swallowed; indeed, it is inaccurate to say that because he was allegedly engulfed in the humpback whale's mouth, and did not go down the whale's esophagus. According to the Cape Cod Times, Michael Packard was on his second dive of the day just before 8 AM, about 10 feet above the sandy ocean floor, when he was engulfed by a humpback whale.

"All of a sudden, I felt this huge shove and the next thing I knew it was completely black," Packard said. "I could sense I was moving, and I could feel the whale squeezing with the muscles in his mouth."

At first, he thought he was getting attacked by a great white shark, but said he quickly realized it was a whale because he couldn't feel any teeth and hadn't suffered from any immediate injuries. On the Jimmy Kimmel Show, Packard said he was "struggling and banging and kicking," as he thought he was going to die. He estimated in a Reddit thread that he was in the whale's mouth for 30 to 40 seconds, and that he was released when the whale surfaced.

Since the story has been published, many skeptics have voiced their opinions on whether or not the account is true. According to The New York Post, the lack of barotrauma from ascending from 45 to 35 feet deep to the surface in such a short amount of time would likely cause more serious injuries. Yet, as a lobster diver, Packard is presumably an experienced diver, and perhaps knew how to adjust his body to avoid compression or decompression injuries.

Regardless, this latest tale of a man getting caught in a whale's mouth touches on an ongoing narrative in human history that intersects with the mysteriousness of whales, and perhaps our subconscious fear of their size. Humpback whales usually range from 39 to 52 feet in length and weigh around 36 metric tons — which equates to around 79,000 pounds. That's about the same weight as a fully loaded big rig semi truck. And while Packard's situation is very rare, it is not the first time there has been a report of such an incident.

In the late nineteenth century a man reported being trapped in a whale's mouth, although the accuracy of his story has been debated as well. Most famously, there's the biblical story of Jonah and the whale, in which the prophet Jonah allegedly spent three days and three nights in a whale's stomach. More recently, in California in November 2020, kayakers got in the way of a whale feeding by the surface — an incident that was documented on video.

But clearly, the most important question is one of plausibility. Does Packard's story add up? And if Packard, as he claims, did get engulfed in a whale's mouth, what would that be like?

To help answer these questions, I interviewed comparative anatomist Joy Reidenberg, Ph.D., who is a professor at the Icahn School of Medicine at Mount Sinai; her research focuses on whales. As always, this interview has been condensed and edited for clarity.

So, what would it be like inside a humpback whale's mouth? Especially 45 feet below the surface?

It's about the size of a small Volkswagen Bug. Think about the size of a Beetle car, in terms of the volume — and that's when it's fully expanded. Getting into a whale's mouth is kind of like getting into a small car. It's got about that much room, but you take out all the chairs in the car, and, of course, the walls are going to be very different depending which part you reach out and touch.

Once you're inside a space like that, the throat and tongue area is extremely stretchy. So I would imagine it's a lot like jumping on a bouncy castle, one of those air castles, that kids play on. The sides will be very hard because there's the jaw itself which will have closed around you at that point. So that's bone, that will be hard, and the upper jaw is also made of bone, and it has the baleen plates hanging down from it on either side.

So, imagine a Polynesian hut with the thatched roof that has the palm fronds on it. It's kind of like having that kind of material all around you on either side. It's very hairy, very brushy, a bit pointy — maybe a little bit more like hairs than like palm fronds — but just imagine that there's a lot of this hairy stuff hanging down on either this side, very stiff bristles of hair are baleen plates which are used for filter feeding. So they have a brushy surface on the inside, but the plates themselves look like giant fingernails, and they're made of the same kind of material as your own fingernails. So while they're hairy on the tongue side, on the outside, they are very stiff almost like the edges of your fingernails are.

What is it like to touch the baleen plates?

If you push against them, they might feel like wire mesh, but it has a little bit of give to it. You couldn't swim between the plates because you could barely get your pinky finger in between each plate — that's how close together they are, and that particular pattern allows for water to be pushed out between the plates. The hairs trap the food that they're eating, like a sieve. You wouldn't be able to swim out through those plates, you'd have to wait for the whale to open its mouth to get back out again.

And I imagine it's pretty dark in there too?

Absolutely. Well, you know, it's pretty dark anyway if you're diving near the bottom of the sea floor which is where this guy was — I'm not sure how deep he was. But when you're inside the whale's mouth it would just be dark because there's no light in there. And so that's why I've only described that you'd feel as opposed to what you would see. You might not even see this whale coming. I'm sure trying to eat him wasn't intentional — which is why he was released — but if you are a fish, you would be fooled by the camouflage of the whale's mouth because it is perfectly adapted for the way that whales feed. The inside throat area is actually black where the tongue is. So it's just like darkness coming toward you.

It doesn't really look like anything that you would recognize. Looking down from the surface of the ocean it's pretty dark. And if you look up, it's pretty light. So the baleen plates are lighter colored, they look a little bit more like sky, whereas the tongue looks more like the darkness you'd see if you look down in the water.

Well, it's a long time if you think about it. Most people can't even hold their breath for that long. The problem is twofold: one is that you become very disoriented right away because you're now being swept up inside this animal's mouth. If you're trying to force your way out, you don't even know which way is out because everything's dark. But at least you know you won't be swallowed.

Yes, it is impossible for a whale to actually swallow him. I want to draw that distinction. I know people are thinking of [Packard] as some modern day Jonah, but if you believe the story of Jonah, literally, Jonah was swallowed by technically a big fish. In those days, they didn't have the taxonomy we have today.

So whales were considered fish, but we don't know if they really meant giant fish or meant a giant whale.

Anyway, a whale's throat is actually pretty small. I've dissected a lot of whales, and I've tried to put my arm down the throat of a dead whale, and I can barely get my arm down that throat. So it'd be really hard for my whole body to go down that throat. It's too small of an opening, and that's because these animals are not swallowing large prey — they're swallowing lots of little tiny things. Feeding is kind of like drinking a thick milkshake for them. They squeeze out the water and then they have this slurry of little tiny fish or tiny shrimp-like animals that they swallow, and that slurry can go down a very small throat. They don't want to drink the seawater — the kidneys have to work extra hard to get rid of all that extra salt. So they exclude the water by pushing it out through the baleen plates, and essentially licki off the baleen plates to get the snack that they want to eat, and just swallow the slurry of little tiny fish.

So if a whale has got a diver in their mouth, it would be like if you eat cherries and there's a pit — you feel it with your tongue you know it's there, you're thinking, "I have to spit that out!"

Do you know if the whale could have tasted the diver?

That's a really good question and nobody knows for sure because no one can really ask a whale: "Does it taste good?" But I will say anatomically there are taste buds in whales. It's been studied more in those small-toothed whales (like dolphins). It's not really clear on the big whales. But there are anatomical structures that are taste buds, but they're just not as prevalent as the ones we have and it's not clear what they can sense. Whales could be sensing salinity, or the mucus that sits on the outside of a fish's body, to know that it's fish and not a rock or whatever they might be scooping up, especially for feeding at the bottom, which is what this whale was doing.

So what would the journey to the surface be like?

Well, the whale would probably be trying to squeeze out the water at that point so it could then swallow its prey. At that point it would realize, "hey, there's something in here, and it's a thing that's way too large to just be prey because it's not compressing when I squeeze these muscles." So I imagine the space would get tighter around the person as the muscles contract that throat area; your Volkswagen is starting to collapse

To me, the biggest danger is actually the fact that the whale is moving to the surface. When you change pressures, which you would be doing if you are heading to the surface, the air in your body starts to expand. And as a diver, if you get panicked you could really injure yourself by not releasing the extra air, because you might get scared and hold your breath, which you know happens to a lot of us. We're scared, we freeze, and we hold our breath. That's the worst thing for a diver to do if they're being pulled up towards the surface. As an experienced diver, he probably knew to continue to breathe out when he felt the whale swimming (if he realized he was in a whale, which I assumed he did pretty soon afterwards) and the pressure lowering. When he realized the whale was taking him upwards, he probably was breathing out, which is a good thing to do because then the air in his lungs would not tear the lung tissue as it expands.

And then what about when he reached the surface, how much force does the whale use to spit something out?

I'm sure it's hardly any pressure at all. It's just a little push to spit him out.