I lost my dad in Nomadland

As a kid, I begged him to leave me out of his nomadic life. Now, my father feels like a ghost to me 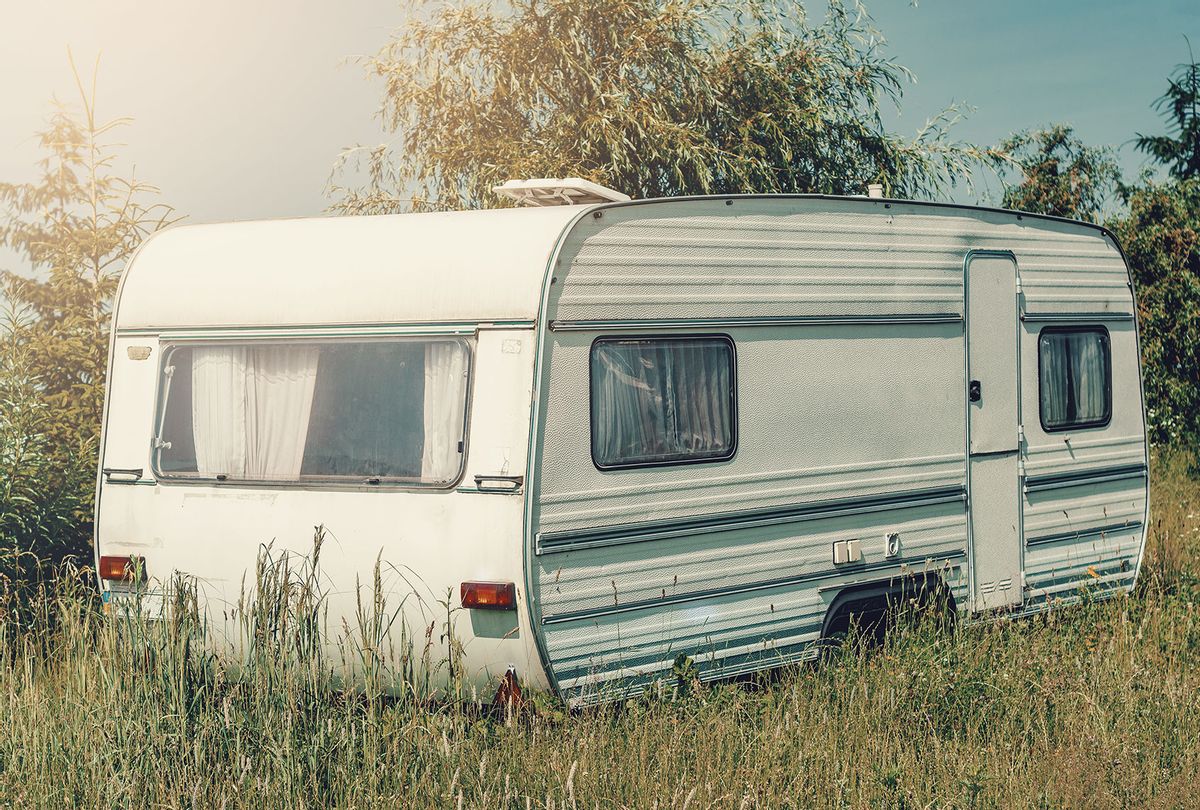 The last time I saw my dad, he arrived in a camper van, having driven from the northernmost coastal tip of Washington State to California to congratulate me on graduating high school. He parked the dust-covered eyesore across the street from my rented garage apartment, where it remained for a week.

"Hey, Babydoll. Look at you, almost as tall as me." It was a name that, from anyone else, would send shivers through me but was somehow endearing from him — the only living person who knew me as an infant, my babydoll self.

With nervous laughter and averted eyes, we did not speak of the years gone by since the last time we'd seen each other. My dad hugged me, and I wondered what the neighbors thought of this ponytailed man in tattered cut-offs and a threadbare t-shirt, whose beard scratched against my cheek as I inhaled a familiar earthy mix of tobacco and Old Spice.

I'd graduated a week earlier, and he missed the ceremony, which was for the best considering my stepmom didn't think he should have any part in celebrating my accomplishment. She had served as my primary caregiver for much of my adolescence, not him.

I moved in with her at 11, when, one year after their divorce and three after my mother lost her lightning-quick battle with cancer, my dad announced he was moving to Alaska with his new girlfriend and her kids. I begged him to leave me out of it. In particular, I meant road-tripping to No Man's Land Alaska with his new love interest. In general, I meant his nomadic life.

In the 28 years since, my feelings about my dad vacillate between anger and pity. I've accepted the fact that my two sons will likely never meet their grandfather. A man I no longer know but who once snapped barrettes into my hair and taught me to love Bilbo Baggins, John Lennon, and acoustic guitar. My father is a memory I bump up against only when sorting boxes of childhood belongings — making space in the garage for my kids' outgrown clothing or latest science fair projects. After three decades, the life I knew with my dad feels ghostlike — a forgotten place.

Then I watched "Nomadland."

Based on Jessica Bruder's book, the movie, directed by Chloe Zhao, won the Academy Award for best picture. Praised by critics as a portrait of modern America, it is about the lives of transient Americans who follow seasonal employment while living out of trailers, RVs and vans. The story is told through the eyes of Fern, a woman who loses her home when the gypsum plant where she and her husband work closes, turning their community in Empire, Nevada, into a ghost town.

I'm not certain my dad fits the movie's definition of a nomad, but for as long as I can remember, he liked to keep moving. I prefer to think his constant relocating was due to circumstances rather than choice. But the moving was part of him, and for a long time, it was part of me.

Polaroids and my birth certificate tell me my first address was a cabin in Bear Valley, but I was too young to have any memory of living there. The first home I remember was in Alaska, where my parents met—my dad a crab fisherman and my mom a cannery worker. Here lies my earliest memory of my dad: Me, planted in front of the living room window in a ruffled, flannel nightgown, waiting for him to appear in the vast winter landscape. My dad, a gently swaying figure on snowshoes growing larger against the evening twilight—the contents of a snow globe coming into view.

Before I began preschool, my parents divorced, and my dad took my younger brother and me from Alaska to the San Francisco Bay Area to live with his parents. A year later, we moved into a nearby townhouse with a woman who would become my stepmother. After they married, we moved twice more within the same county before finally loading a U-haul and heading north to a shingled A-frame in the coastal mountains. I began second grade in a town known for its scenic steam train, Frontier Day celebration, and enough cannabis farming to earn a place in Northern California's legendary Emerald Triangle.

We stayed in the A-frame long enough to form friendships, accumulate pets, and for my dad to build a wraparound deck and convert the unfinished basement into bedrooms for my brother and me—walls and ceilings lined in knotty pine. If I could claim a childhood home, this would be it.

But like all the homes that came before, it didn't last.

When we left the A-frame, it was because my dad had been seeing a woman in town, resulting in my stepmother's understandably quick departure. When she drove away, I chased after her car, wishing I could lasso it and go with her. But instead, my dad farmed out our dogs and moved my brother and me into his girlfriend's two-bedroom HUD apartment with a duffle bag of belongings and her three kids we'd never met. A few months later, we moved to a pop-up camper on a clearing at the end of a mountainous dirt road, where we stayed, all seven of us, through the summer, until the rain sent my dad in search of a structure more durable than canvas and nylon.

After two more moves, my dad announced our next destination: Alaska. Worn down by my resentment and disappointment, he agreed to leave me with my stepmother, who, for reasons I'll never fully understand, took me in. I hugged my brother goodbye in the morning fog and watched him climb onto the school bus. When the doors closed with him inside, I filled with guilt for my inability to live a rootless life.

Watching "Nomdadland," the nomads seemed content and purposeful in their living. I questioned my memory. Where was the worry about heat, food or safety? Where were the kids who grew up with severed friendships and shame for not having a phone number or address? Life with my dad had been nomadic, but we weren't nomads by intention or with a communal ethos; we just couldn't make ends meet for very long in the same place.

The year I turned 15 — a malcontent at odds with my stepmom — I returned to my dad and brother in Washington State. In 12 months we bounced between apartments, motels and campgrounds. The motels were run-down but some offered free donuts and hot coffee on icy Pacific Northwest mornings. In the summer at the campground, my brother and I dragged our sleeping bags to the grassy, lake shoreline in an attempt to glimpse the northern lights.

If we didn't think about it too much, we could almost pretend we were on vacation. On vacation, we made sense. But who wants to tell friends they live in a campground?

As a kid living a nomadic life, I had no agency. It was thrust upon me. But does anyone truly choose to be a drifter? In the film, the 2008 recession was the catalyst that sent people searching for a better life on the road. One where they lived by their own rules and could no longer be disappointed or displaced by the myth of bootstraps and the American Dream.

While Fern worked for CamperForce, Amazon's jobs program for van-dwelling retirees, my dad lived day-to-day making rust-proof crab ring pots out of the trunk of his decrepit Dodge station wagon—quite a feat considering they required wet cement. He loaded completed orders of black PVC and green netting into the trunk and delivered them all over Puget Sound. Sometimes I tagged along, listening to him croon out the driver's side window to classic rock, and following him to the top deck of car ferries where we'd lean on the rail in the wind and watch Whidbey Island grow nearer as my dad smoked cigarettes and recalled his days in the Bering Sea.

He stretched his arms wide when he spoke of pulling in full pots of king crabs. "Most ring pots are metal, which rusts and breaks down over time," he explained. The irony of my dad making something lasting to fund our transient life was lost on me then.

The last evening I spent with my dad, we sat on lawn chairs under a ceiling of stars in the uncomfortable silence that always filled the space before one of us left. The next morning as we stood beside his van on the sidewalk, he studied me — glassy-eyed and sentimental — the way he did when a memory jarred loose.

"She'd be so proud of you." I knew he meant my mother, who existed in me largely because of stories my father had shared over miles and years of driving us from one place to the next.

"Thanks, Daddy." I leaned into his arms and let the heavy loneliness of him flow through me. When he opened the door and climbed into the driver's seat, I knew better than to ask where he was going or when I'd see him again.

In one of "Nomadland"'s final scenes, Fern visits a fellow wanderer, Dave, at his son's house in a coastal California town not far from the mountains of my childhood A-frame. In a scene of domestic life that bears little resemblance to the nomadic one to which she's grown accustomed, Fern observes Dave and his son sitting side by side at the piano, playing together in harmony. I wondered how it is possible to pick up again as if no time has passed.

If I met my dad now, as a stranger, I'd find him fascinating. A layer removed, I might understand his need to be untethered. Even in my hard-won familial life, there are moments I wonder who I'd be if I didn't exist in reference to someone else—not a mother or a wife, but a solitary being fueled by wanderlust. Only now can I see that in the way my dad's life made me feel unmoored; mine would make him feel caged.

For me, "Nomadland" wasn't as much about the characters on screen as what happens off the page. I can't watch it without seeing the story of losing someone to a nomadic life. The loved one who didn't make it back to sit side by side at the piano or meet grandchildren; but who drove away in a van and merged onto northbound traffic, resolute in their need to keep moving.

It never occurred to me to look up our old A-frame, but during hours of mindless pandemic scrolling, I turned to Google. Relying solely on memory, I wondered if maybe I'd imagined those years of semi-stable family life. Within seconds Zillow brought up a dozen images. There were the pine trees I raced through with my brother; there was the wraparound deck my dad hammered and sanded into place; there was the lush plot of land where we grew rows of zucchini and cherry tomatoes; there was my old room exactly as I remember it — walls covered in knotty pine.

What surprised me more than how much my childhood home remained unchanged was how much my house today resembles it. Unwittingly, among redwood trees and under vaulted wood ceilings, I've created a home that echoes a time when, for a little while, my childhood — and my father — stood still.

Jacque Gorelick has written for The New York Times, The Washington Post, and HuffPost. She grew up all over the West Coast and is now firmly rooted in the San Francisco Bay Area, where she lives with her husband, two sons, and three rescue dogs. She recently finished a memoir about family lost, then found. You can follow her on Twitter @jacgorelick.