"Nomadland" wins big at the 2021 Oscars, which made history — and some unfortunate choices

The 93rd Academy Awards wasn't the worst awards show in this pandemic era, but it really let us down in the end 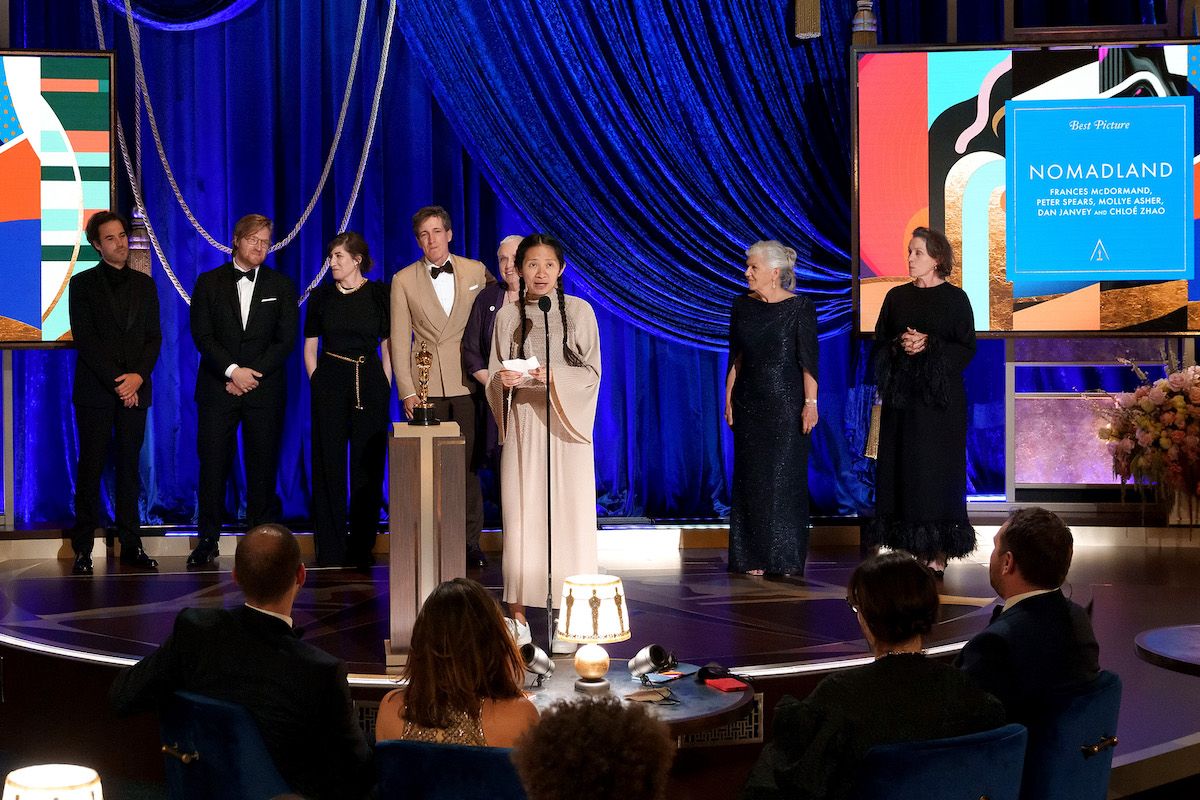 Few frustrations irritate more than a decent movie that ends poorly. Downright awful closers have a way of retroactively ruining virtually everything that came before it. Think "The Ninth Gate," or how the last episode of "Game of Thrones" tanked the eighth season.

The 93rd Oscars didn't wipe out that badly, but it sure did massage us toward a specific climax that did not arrive. Producers Steven Soderbergh, Jesse Collins and Stacey Sher embraced the pandemic era's lack of normalcy to completely upend the telecast's classic format in several ways, including rearranging the announcement of the final three awards.

Best Picture, which typically closes out the ceremony, was announced third to last. It went to "Nomadland," whose director Chloé Zhao made history as the first woman of color, the first Chinese woman and the second woman ever to win the Oscar for directing. The second-to-last award revealed that "Nomadland" star Frances McDormand won her third best actress Oscar over, among others, Viola Davis ("Ma Rainey's Black Bottom") and Andra Day ("The United States vs. Billie Holiday").

Leaving the best actor category for last was a bet on the part of the producers that Chadwick Boseman would posthumously win for his stunning work in "Ma Rainey's". He'd already won a Golden Globe and a SAG Award. Why wouldn't he?

Because this is the same set of voters that gave "Green Book" best picture two years ago. Of course they chose Anthony Hopkins for "The Father," granting him his second Oscar. From what I understand, Hopkins was terrific in "The Father," so you can't say his Oscar wasn't earned. But Hopkins wasn't present, and didn't send a proxy to accept the statue in his place, so the no-host telecast ended abruptly and left a sour aftertaste.

Considering all that came before, what an unfortunate way to go.

Exciting the 93rd Oscars was not, but it did feature a relatively diverse set of nominees, unless you were looking for Latinx and Native American directors and actors. There's still plenty of work for the Academy of Motion Picture Arts and Sciences to do in that regard. Nevertheless, this year's Oscars made history.

In addition to Zhao's win, "Minari" star Youn Yuh-jung's win for best supporting actress win made her the second woman of Asian descent to win this award and the first Korean to do so. Hopkins' upset(ting?) win over Boseman makes him the oldest Oscar winner ever.

Academy voters spread the love among favorites, with Daniel Kaluuya winning best supporting actor for his work in "Judas and the Black Messiah," which also won best original song with "Fight For You." Pixar's "Soul" clinched a best animated feature Oscar, along with best original score.

Sensibly, "Sound of Metal" won for best sound and film editing; less explicable is awarding "Mank" the prize for cinematography when better choices were available, including "Nomadland." ("Mank" also won for production design.)

A more polarizing may be the best documentary feature Oscar going to "My Octopus Teacher" in a category that included stronger choices such as "Time," "Crip Camp" and "The Mole Agent." Also shut out were "One Night in Miami," "Trial of the Chicago 7" and "Borat Subsequent Moviefilm."

Voter choices aside, what we should remember most about this two months-delayed 2021 Oscars telecast is production's creative detour — that is, if we can forget the bad wager it finished with.

Going host-free worked for the third year in a row, and so did the choice to hold the ceremony in-person, which was only possible by adopting movie set protocols: vaccinations, testing, re-testing and being careful about masks and exposure. By trading in the Dolby Theater for Los Angeles' Union Station, the Academy created the illusion of a classic Academy Awards ceremonies held in places like the Biltmore Hotel or the Ambassador by kitting out the transit hub with tables, floral falls and drapery — after clearing out the homeless.

Surely nobody was inconvenienced.

In turn the audience was given a more intimate pre-show. Instead of the cacophony of press lining the red carpet, an outdoor area was transformed to resemble a swanky Hollywood cocktail mixer.

Stars in their finest gowns and sharpest suits swooshing around roses and greenery and conversing on designer seating, occasionally stopped by to joke with pre-show host Lil Rel Howery, who reveled in not being clear on the concept much of the time.

This gave the pre-Oscars an airy, casual feel and actually felt like a Hollywood event as opposed to the awkward Zoomified snooze that was the Emmys or the hybrid of distanced and live participation that the Golden Globes attempted. There is no pageant competition for major awards seasons, but if there were this would come in a close second, maybe third. Nothing is going to beat the 2021 Grammys telecast, which Collins also produced, although MTV's VMAs provided an early clue as to how it could all work.

And this makes the choice to bury the best original song choices in the pre-show baffling. If pandemic TV has taught us anything, it is that musical artists figured out how to create pre-recorded, lushly realized pieces that can easily be integrated in live shows. In an awards show, where the energy is likely to flag, musical interludes can be life rafts.

About two hours into Sunday's broadcast, let's just say they were missed. But then, a lot of the old Oscars magic wasn't there. What was Elvis' old plea about a little less conversation, a little more action, baby? Soderbergh and the other producers flipped that around. They wanted to make this Oscars feel like a film instead of a typical self-congratulatory snooze, treating the presenters and the winners like performers instead of stars.

In small doses, that worked. Opening with "One Night in Miami" director Regina King power-strutting her way to the stage as colorful "credits" bounced around her teased us with a heist flick vitality.

King used her platform to address the outcome of the Derek Chauvin trial: "I have to be honest, if things had gone differently this past week in Minneapolis, I might have traded my heels for marching boots," she said, adding, "I know many of you want to reach for your remote when you feel Hollywood is preaching to you, but as the mother of a Black son who fears for his safety, no fame or fortune changes that."

From there she and the other presenters did what they could to make each award feel personal. In telling us about the people who make the movies, the stars — excuse me, cast mates— downplayed the perception that celebrity is impersonal. King, for example, described how the nominated screenwriters supported themselves by working catering jobs or suffering through telemarketing.

Directors and actors shared stories about the movies that influenced them, or the first films they ever saw. All of it was consciously designed to remind us that Hollywood is an industry run by people, that even stars are just like us in some ways. And if you love the movies — which you do, presumably, if you've tuned in to this show — then you may not have minded this emphasis on the human factor.

Legendary theaters are closing and may never open again. Lots of people whose names you never stick around to find in the film credits are out of work.

Highlighting this within the telecast was the segment touting Tyler Perry's acceptance of the Jean Hersholt Humanitarian Award at the Oscars for, among many community efforts, creating Camp Quarantine at his Atlanta-based production studio, enabling artists to work safely during the pandemic.

These conversations and Perry's poignant speech about reserving judgment and practicing generosity are reminders that so much of the movie industry runs on the efforts of people that don't cavort around in borrowed jewelry or couture gowns.

The downside of this is we didn't see much of the fruits of their labor due to the lack of clips for categories such as sound editing, costumes or set design. Film clips were only shown for the major award choices earlier in the show, presumably to allow for the winners' speeches to go on for as long as they liked.

There was no orchestra, and Questlove, the show's musical producer, was directed not to play them off.

But as is the case of any awards show, not all speeches are alike.

Some, like Kaluuya's acceptance for "Judas and the Black Messiah," combined heartfelt sentiment with expressing the awesome randomness of living this life. "It's incredible! Like, it's incredible! My mom and my dad, they had sex. It's amazing, man. I'm here. So, I'm happy to be alive!"

"Two Distant Strangers" writer and director Travon Free, upon accepting the award for best live-action short, quoted a literary great. "James Baldwin once said the most despicable thing a person can be is indifferent to other people's pain," Free said, adding, "Please don't be indifferent to our pain."

Thomas Vinterberg, director of best international feature "Another Round," stirringly paid tribute to his late daughter.

Best original screenplay winner Emerald Fennell ("Promising Young Woman") was quite funny, but it was hard to top Youn's freestyle tight five upon accepting her best supporting actress Oscar, in which she ribbed Brad Pitt and informed Glenn Close that "I'm luckier than you."

Close, a nominee for "Hillbilly Elegy," wasn't entirely shut out of the ceremony's spotlight thanks to a questionable music trivia bit that would have been indulgent in a normal year. She closed it out by dropping some (scripted) knowledge about "Da Butt," E.U.'s one-hit wonder from Spike Lee's "School Daze." Then she stood up and actually did Da Butt, becoming a meme only minutes later.

Now that's an ending we can all get behind, if we remember anything about this Oscar season. This strange time has a way of taxing our short term memory, and once this awards season is a dot in our rearview mirror perhaps we'll simply look at this Oscars as an adventurous effort that in the end, couldn't wriggle free from of clichéd habits. At least it wasn't for lack of trying.