In the sequel, Sacha Baron Cohen introduces Borat's daughter, who is as good at exposing fools as her father 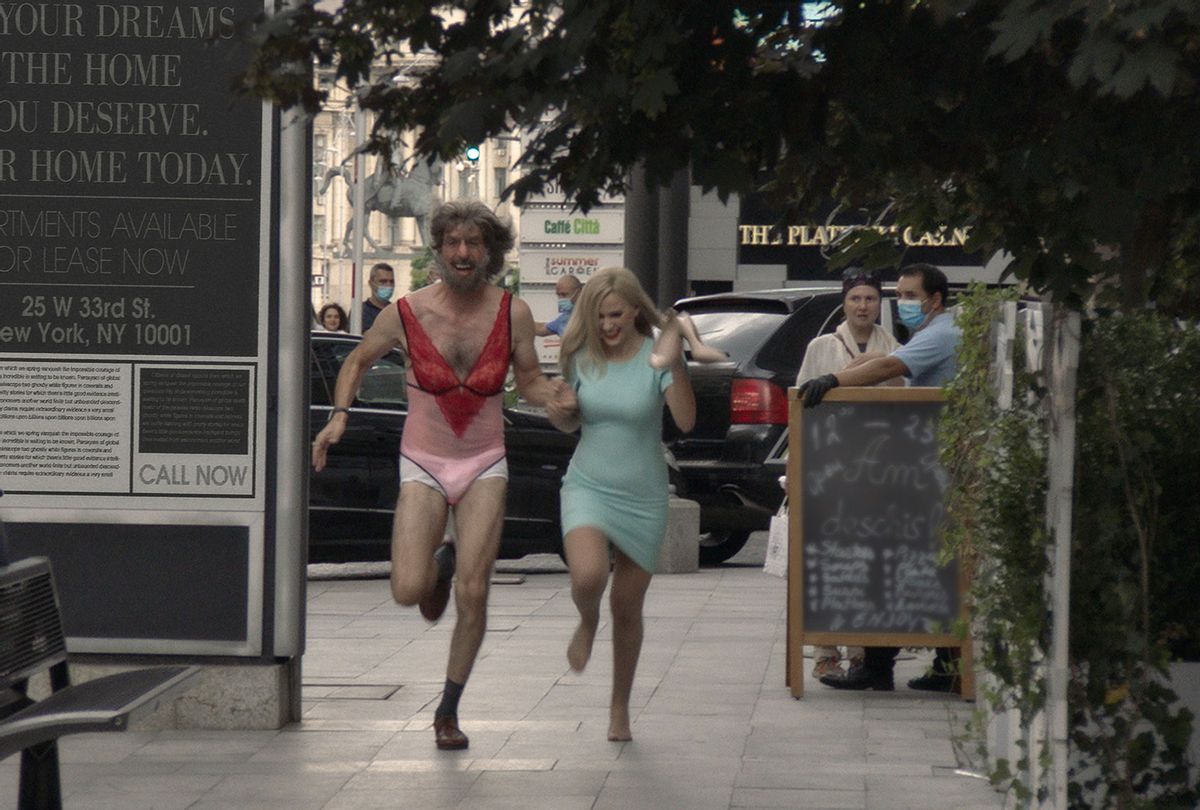 On Wednesday multiple news outlets revealed the purported headliner of "Borat Subsequent Moviefilm" to be none other than Rudy Giuliani, President Donald Trump's trusted lawyer and cable news's favorite nutcase.

Compared with the mock attempted kidnapping Pamela Anderson, Borat's ultimate get in 2006's "Borat: Cultural Learnings of America for Make Benefit Glorious Nation of Kazakhstan," the pranking of America's mayor does not make for a grand climax or even an affectionate one. Instead, it more or less confirms what we already know about Rudy Giuliani: his corruptibility makes him shockingly easy to dupe.

All it took for the producers of "Borat Subsequent Moviefilm" to succeed in their mission was a simple honeytrap, presented in the form of Baron Cohen's exceptional co-star Maria Bakalova dressed as a right-wing fake news Barbie. By the time we get to that scene the Bulgarian actor has solidly established that she is the reason this feminist-themed sequel works as well as it does.

Performance-wise, Bakalova fully commits and never breaks, keeping pace with Baron Cohen in every shared sequence and commanding every scene she pilots solo. If Baron Cohen were to ever greenlight an inheritor to his Borat franchise, she would more than do it justice.

And this illustrates the subtextual call to action throughout in "Subsequent Movefilm" for women of good conscience to reclaim their power, not only at the polls but in the realm of social equity. Baron Cohen and his writers cloak this in slapstick from the moment we're introduced to Bakalova's Tutar, the 15-year-old daughter Borat never realized he had.

Tutar is filthy and coarse, raised in a pen and guided by a book given to her by the Kazakh government that insists that women cannot drive, own businesses or even touch their privates without causing great disaster on par with the sinking of the Titanic. Her highest aspiration is to live in a golden cage like Queen Melania, "the happiest wife in the world," emboldening her to join Borat's latest trip as a stowaway.

Similarly life, and Borat's government, have not been kind to him since "Cultural Learnings" conquered America with great success – high five! – 14 years ago.

America may have loved Borat but his countrymen, neighbors and family in his home village of Kuzcek felt great shame at how his documentary portrayed them (a nod, perhaps, at the Romanian villagers angered at being misrepresented in the 2006 film, who unsuccessfully sued its producers). In reaction he was sentenced to a life of hard labor in a gulag.

This is why the Giuliani spoiler leaking before the film's releasae fails to ruin "Borat Subsequent Moviefilm" because, like old Johnny would do in a room full of bananas,  plunking Giuliani into a situation like the one announced in the film's full title: "Borat Subsequent Moviefilm: Delivery of Prodigious Bribe to American Regime for Make Benefit Once Glorious Nation of Kazakhstan" merely yields the expected results. Giuliani was hoodwinked not by a monkey but old-fashioned monkey business. Wa-wa-wee-wa!

In the main, the humor driving "Borat Subsequent Moviefilm" is a continuation of what Baron Cohen does in his 2018 Showtime series "Who Is America?" – which his to say that he functions more as a prodding force these days than a hard crowbar. Long ago the Borat character functioned as a truth serum, the kind of amiable ignoramus people were inclined to countenance or forgive either out of politeness or a sense of superiority. Bigots would meet his bigotry with their own, perhaps, in a gesture of finding common ground, while others put up with him out of kindness.

Now, as father and daughter embark travel through the good old U.S. & A 2020 edition, they encounter a place where the rampant racism, anti-Semitism and Islamophobia Borat unearthed in 2006 is now on proud display across the land and slathered in misogyny.

The sexism, though, is the road by which Borat and Tutar find their way in to the psyche of the ugly American – enabling them to infiltrate a debutante ball where Borat gets a father to admit he'd pay $500 for Tutar within earshot of his own child, and another man, hopelessly drunk, slurs out unbidden that men love pretty girls in South. "They're fun!"

Following a span of time in which Borat keeps Tutar in a cage while he sleeps in the relative luxury of a horse trailer he drags behind a jalopy, "Subsequent Moviefilm" makes Tutar's empowerment the centerpiece of the movie's second half.  Baron Cohen's signature obviousness and a style reminiscent of director Jason Woliner's past TV work (which includes series such as "Nathan for You") shapes how this transpires, and the audience either accepts this for what it is or may cringe at its clunkiness.

Either way, the fact that "Borat Subsequent Moviefilm" and Baron Cohen need Bakalova is indisputable.

There's the practical matter that the character of Borat is famous, for one. Back in 2007 Baron Cohen announced that he was retiring two of his alter egos, Borat and Ali G, acknowledging to The Daily Telegraph that "the problem with success, although it's fantastic, is that every new person who sees the Borat movie is one less person I 'get' with Borat again, so it's a kind of self-defeating form, really."

What he could not have predicted back then was how thoroughly the fabric of reality would be torn by the disinformation flood plaguing us today. However, he's right about the problem of Borat's fame. "Subsequent Moviefilm" confronts this early in the film when Borat sets down in America once again, only to be instantly recognized and pursued by crowds of thrilled Texans. This necessitates a trip to a local costume shop to purchase prosthetics and disguises.

Nonetheless, Borat's relevance in 2020 is debatable. Since the anti-Semitism and sexism at his heart are defining traits in a nation seized by white nationalism, that either makes him redundant or highly relevant -- except for the fact he reveals of his subjects' prejudices.

But then, they never were. The laugh-until-you-cry parts of the original "Borat" don't involve, say, the Islamophobic, homophobic rodeo organizer mouthing off or those Southern frat boys wishing aloud that slavery was still legal. The best antics involve Borat's stupidity crashing against the patience and politeness of typical Americans, or ludicrous moments like the nude wrestling match between him and his producer Azamat (Ken Davilian) that spills out of their hotel room and well into public spaces.

Fewer of those sight gags exist in "Subsequent Moviefilm." Save for an extended segment in which he quarantines with a pair of right-wing QAnon adherents, such have been replaced instead by situational humor, such as the turn where Tutar swallows a plastic baby cake decoration and Borat rushes her to what he believes to be a doctor's office. Naturally they land in crisis pregnancy center where father and daughter are counseled, not by a doctor but by Pastor Jonathan Bright. This evolves precisely as one expects it would.

Then there are the bits that have already made the news: Baron Cohen's infiltrating the Conservative Political Action Conference in February dressed as Trump? They work their way to that, and a scene from a right-wing militia gathering in Washington state where enable Borat performed as Country Steve, where he got the audience to sing along to a racist ditty, staring with lyrics about injecting Obama "with the Wuhan flu."

Gotcha moments like this and the Giuliani business don't tell us anything we don't already know. Instead, it's what the context implies about America's psychological state. The cringe comedy in the crisis center isn't merely in the misunderstanding about the nature of the baby inside Tutar's stomach, it is his calm insistence in her keeping it there even after Tutar's father tells him that he put it there. (He bought the cupcake, OK?)

But this is part of an escalating series of moments that show us who America is: a nation of very fine people who live and let prejudice flourish so long as it doesn't disturb the status quo.

There's the Texas baker who uses icing to pipe the words "Jews Will Not Replace Us" on a chocolate cake without batting an eyelash. There's the shop owner who guffaws along with Borat when he asks that Tutar be directed to the "no means yes" dress section. There's the spray tanning salon technician who, in response to Borat asking, "What color is best for racist family?" says without pause or reaction, "I wouldn't go any darker than a six or a seven."

All of these are women, by the way.

This leads up to savior in this narrative: Jeanise Jones, a Black woman Borat hires to look after Tutar and who ends up talking some sense in to her, starting with waking her up to the fact that her father has been lying to her. (And how.) Jones is the level-headed figure in a vast land of fools; she's also playing to the trope of the Black woman savior utilized in the first "Borat" and touted in this election cycle. Placed in the context of everyone else Borat and Tutar encounter, though, she's a cool clarifying drink in a desert of dumb and therefore welcome.

Evaluating the comedy value of "Subsequent Moviefilm" relative to the first "Borat" sets it up to lose, sad to say. It is enormously entertaining and for the reasons listed above a healthy treatment to whatever anxieties plaguing us a little more than a week leading up to the election. Whatever faults it has aren't deadly, although it's plain to see that the pandemic forced a shift upon the film's plans and likely shifted its ending in ways that don't feel fully baked.

The most prominent difference between the "Borat" of 2006 and the 2020 "Subsequent Moviefilm" is in who America is now. Our inability to agree on basic facts has only worsened since Trump's election in 2016, to say nothing of how decline and fall of basic critical thought has left us vulnerable to benevolent pranksters like Baron Cohen and outside forces who would mean us harm.

At the same time there's simply no getting around the fact that Kazakhstan receives little in the way of an image acquittal in this follow-up, an unavoidable and miserable result of alloying a problematic character to a place. However, if there's a salvageable component to this it is in how differently the sequel leaves us. When we first met Borat we comforted ourselves with the first-world notion that somehow we are better than people of so-called "lesser" nations.

Now it doesn't allow the audience to be so sure of itself, implying in the final scene that we aren't merely ugly Americans. We're a once glorious nation being led by goons who are sliding us backward into diminishment, and dangerously so. That is nothing to laugh about.

"Borat Subsequent Moviefilm: Delivery of Prodigious Bribe to American Regime for Make Benefit Once Glorious Nation of Kazakhstan" is currently streaming on Amazon.