The Golden Globes' cringey attempts at diversity signaling was a joke

Hosts Tina Fey and Amy Poehler did their best, but the virtual awards show became a "we can do better" pageant 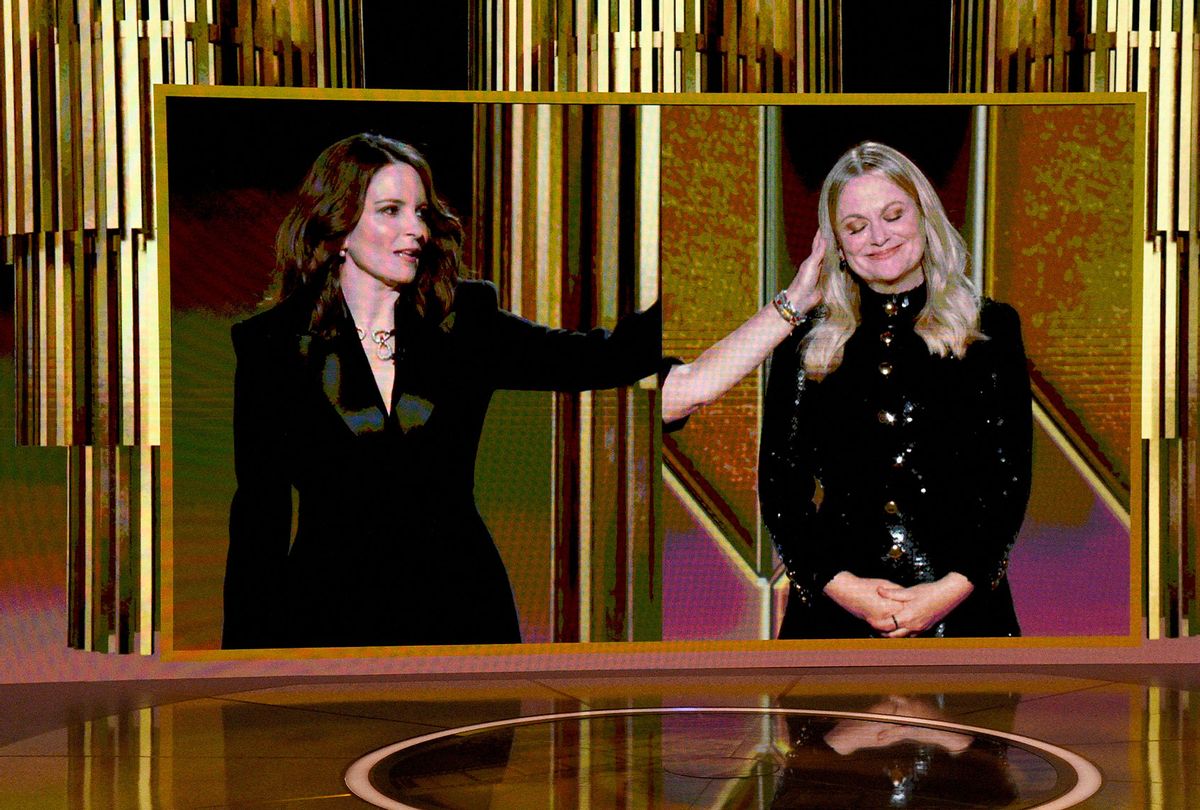 At this point the Hollywood Foreign Press Association is out of excuses. If you've been keeping up on current events regarding the organization that hosts the annual Golden Globe Awards, then you know that statement could apply to any number of screw-ups. The headliner of Sunday's 78th annual awards show, of course, is the absence of Black representation in the organization's ranks.

The HFPA hasn't had a Black journalist in its membership for 20 years.

Thus, leading off its 2021 awards telecast by nearly dropping Daniel Kaluuya's acceptance speech for his Best Supporting Actor, Motion Picture win for his portrayal of Fred Hampton in "Judas and the Black Messiah" was particularly unfortunate.

For this round of distanced self-congratulation one would think the organization would want to make very sure that the event itself was as technically flawless as could be. Several awards shows have run prior to this Globes from which producers could have taken cues. The 2020 Emmys streamed in nominees live from 100 simultaneously active feeds beaming in from locations around the planet.

And yet, this happened: Laura Dern, who presented the Best Supporting Actor award, looked flustered as the technical difficulties persisted and attempted to move things along, skipping the actor's speech. But when the connection was restored to Kaluuya's pointed outcry – "You're doing me dirty! Is this on? Is this on?" – he gave his full speech, expressing hope that the people who watched the movie would be moved to find out more about how Hampton lived instead of simply knowing how he died.

If there were an awards ceremony that symbolized the world collectively succumbing to the pandemic blues, the 78th Golden Globes was it. Returning hosts Amy Poehler and Tina Fey did what they could, with Poehler beaming in live from the Beverly Hilton in Los Angeles, where the awards are typically held, and Fey broadcasting from the Rainbow Room in New York. Each played to reduced capacity rooms comprised of front line workers in the audience and approximated being onstage together by way of an awkward split screen. But the whole night was a cake with a saggy middle and burnt edges.

Beyond the Best Supporting Actor glitch, the evening went on with only a few flubs here and there, and at least one – Tracy Morgan's reading the title of Best Animated Motion Picture winner "Soul" as "Sal" – possibly intentional.

The winners themselves were more or less as expected. It was a good night for "The Crown" and specifically its stars Emma Corrin, Josh O'Connor and Gillian Anderson. "The Queen's Gambit" scored multiple wins, as did "Borat Subsequent Moviefilm" and "Nomadland."

Rosamund Pike shocked with her Globe win in the Best Performance by an Actress in a Motion Picture, Musical or Comedy for "I Care a Lot." Of course "Schitt's Creek" won for Best TV Comedy, as did star Catherine O'Hara. It swept the Emmys. Why wouldn't the Globes toss something on the pile?

Celebrity nominees Zoomed in from their homes, although there were for a few live presenters, including Tiffany Haddish, Angela Bassett, Sterling K. Brown and Susan Kelechi Watson, which is to be expected.

Nevertheless, noticing how casually some viewed the evening as opposed to others provided as sure a sign as to how long we've been in this pandemic business. Angela Bassett slayed in a regal plum gown with feather trim because that is part of the contract the universe signed with her –  there is never a time that she doesn't look impeccable.

Anya Taylor-Joy was dressed to the nines in an emerald gown and ready to snag her Globe for "The Queen's Gambit," which also won Best Limited Series, Anthology Series or a Motion Picture Made for Television. When "Minari" won a Globe for Best Picture, Foreign Language Lee Isaac Chung's seven-year-old daughter stole the show by hugging her father and showing off her faux-fur capelet.

Meanwhile Jason Sudeikis, who looked utterly shocked by his Best Actor in a TV Comedy win for "Ted Lasso," showed up in a faded tie-dye hoodie. Even the impeccably clad Boyega admitted that he was formal up top and track pants on his lower half.

This was also the soberest Golden Globes we've seen in a long time, and I have to admit, I miss my sauced celebrities. Everyone was home, or beaming in from a rented location made to look like home, but nobody looked terribly baked or soused or in a mood to riff on injustice, save for Mark Ruffalo's usual earnest ramblings.

With none of the usual distractions, then, we were left to contemplate the irony of so many Black presenters for an awards ceremony that snubbed a long list of work and performances from Black creatives.

Fey embraced the license every Globes hosts has to knock around the stars a bit to cite the ridiculousness of the nominations for "Emily in Paris" and Sia's disastrous "Music." Cecil B. DeMille award recipient Jane Fonda sang the praises of Michaela Coel's "I May Destroy You" in her acceptance speech, which is as close to the Globes stage as that deserving series came.

Spike Lee's children Satchel and Jackson Lewis Lee were tapped to be Golden Globes ambassadors, a ceremonial role that in no way makes up for the fact that his excellent Vietnam vet drama "Da 5 Bloods" was shut out of awards contention.

Its star Delroy Lindo was expected to receive a nomination, only to be snubbed – placing him in fine TV performer company with the likes of "Euphoria" star and Emmy winner Zendaya, Uzo Aduba from "Mrs. America" and Jurnee Smollett and Aunjanue Ellis from "Lovecraft Country."

Head-slappers abounded among the nominated choices as well, one of the biggest being that "Minari," the Foreign Language film winner, is an entirely American production.

"Soul"'s Black co-director Kemp Powers gave his part of the team's acceptance speech via recording since, according to The Hollywood Reporter,  apparently he was only notified that he was one of its nominees on Sunday.

And if seeing Lee's children trotted out as part of the HFPA's "We Can Do Better" pageant wasn't enough of a wince-fest, the three HFPA members who took the stage to stiffly talk about diversity, with past HFPA president Meher Tatna placed front and center, was particularly embarrassing.

Sacha Baron Cohen, a two-time winner on Sunday for his "Borat" sequel, refused to let them off the hook in his acceptance speech: "Thank you to the all-white Hollywood Foreign Press!" he said.

All of his tumbled together into to a pile of misfortune of the organization's own making – and yet its lack of inclusion should not take away from the solid and worthwhile wins this round of awards yielded. Kaluuya deserves that Globe, as does John Boyega for his Best Supporting Actor, TV win for his performance in "Small Axe."

Chadwick Boseman gave the performance of his career in "Ma Rainey's Black Bottom" and did not survive to reap the rewards that are his due. His win on Sunday should make him a lock for an Oscar nomination; it also makes him the first Black winner since Forest Whitaker's received his Globe award for 2006's "The Last King of Scotland."

To see Boseman's wife Taylor Simone Ledward accept the award on his behalf, weeping as she gracefully stated every line of what she believes he would have said, is to know that this honor is especially bittersweet.

Her speech was powerful and heartbreaking, and to think she'll probably have to do it again at the Academy Awards is equally wonderful and painful.

On the other end of the emotional spectrum there's nothing but joy to be taken from the skit where a group of small children couldn't say where England's royal family lived but recognize Boseman as The Black Panther.

Other Globes history happened on Sunday too: Andra Day's Best Actress in a Motion Picture Drama win for her work in "The United States vs. Billie Holiday" makes her the first Black woman to win in that category in 35 years.

"Nomadland" director Chloe Zhao also made history as the second woman ever to win the Best Director award at the Golden Globes (Barbra Streisand won for "Yentl" in 1983) and the first Asian woman to receive the honor. Her film also won Best Motion Picture, Drama.

Whatever sins of laziness the HFPA has committed lo these many years doesn't take anything away from these legitimate victories, even though the TV field could have been more varied and better reflective of the adventurous artistry we saw last year.

Then again, hopefully the organization will be inspired by the example set by Norman Lear, this year's winner of its Carol Burnett Award. His introduction included a montage of his greatest work, including "All In the Family," "Good Times," "The Jeffersons" and "Maude," and both versions of "One Day at a Time" – each of them impactful and extraordinary comedies that touched our hearts and made us want to do better and be better.

If the path set by his life's work isn't enough for them to follow, there's also this direct call from Fonda to heed: "There are stories we've been afraid to see and hear in this industry . . . about who is offered a seat at the table," she said, going on to add, "Art has always been not just in step with history but has led the way, so let's be leaders." At the very least, maybe open those exclusive gates a bit wider.