Gillian Anderson is masterful playing the Prime Minister, while Emma Corrin is uncanny as the People's Princess 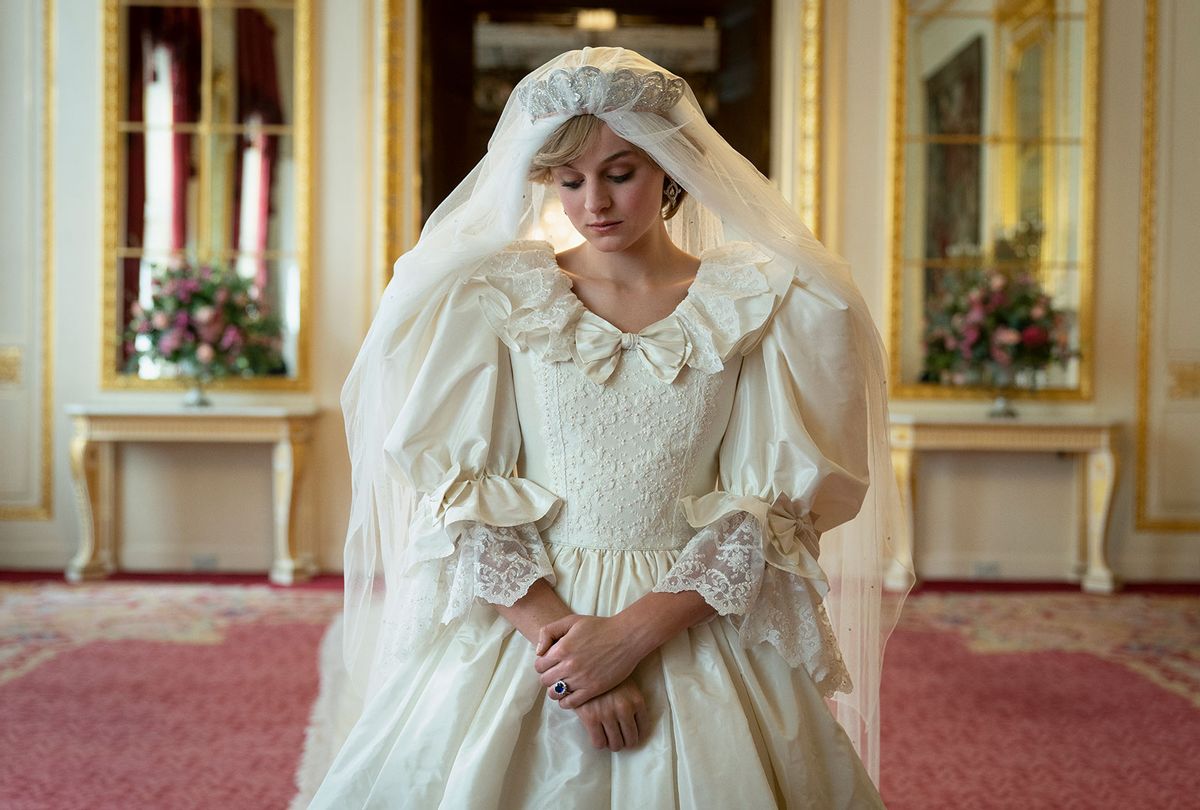 For many, and the exhausted and traumatized especially, the return of "The Crown" offers a refuge at the end of a blistering presidential election season that stretched out for what felt like decades. Presumably Netflix scheduled its debut quite intentionally, realizing what the audience would have recently survived. What they didn't predict was that our election stress would stretch up to the fourth season's doorstep and pummel viewers to the point of wanting only to cocoon into a binge, ready to receive its comfort.

And this is a strange idea given that, overall, "The Crown" could not be described as a feel-good series.

Peter Morgan's creation offers its balm in a different respect, though in that it is quiet, measured in its presentation and in keeping with its theme, unerringly elegant and soapy in all the right ways. Season 4 also indulges in more fun than past seasons, although part of that opinion may be influenced by the time period.

The Windsors are now in the 1980s and dancing to beats familiar to the many folks who grew up in the post-punk world and remember the royals bleeding over into mainstream culture in ways that previous generations resisted . . . all due to the popularity of Princess Diana, brought to life by Emma Corrin.

Diana's entry into "The Crown" has been anticipated since the series was first announced, and Corrin's portrayal of the Princess of Wales is delicate and assured enough to live up to the high expectations first-time viewers of the series may have. To watch her shimmy and dance to Blondie and Stevie Nicks is blissful and sad at once, because we know how this ends.

Both Corrin's presence and that of the legend she plays transform the series from an examination of Queen Elizabeth II's transformation from individual into symbol into a study of the tragedy that results when a person who has relinquished much of her humanity is confronted with a charming, loving, kind young woman who hugs, much to her majesty's horror.

Elizabeth, as she is played by Olivia Colman, is a woman who was raised to abandon her sense of individuality and instead give herself entirely to the service of crown and country. What tenderness she had was shed in her youth (as Claire Foy played out in the first two seasons) and in middle age, she's frequently made to question the suitability of her emotions . . . or lack thereof.

Season 3 asks her to weigh this in light of a disaster that destroys a working-class town and kills a school filled with children, forcing her to realize that some tragedies call for putting aside the stubborn tradition of royal detachment.

These new episodes force the monarch to confront this inner turmoil from different angles and through the lens of various points in history, including 1982's Falklands War, the international outcry over the brutalization of Black South Africans oppressed under apartheid, and the rising anti-Monarchy sentiment in Australia. "The Crown" takes us along the edges of some of these moments in time and to the center of others, which is a smart way of preventing the history from weighing down the drama. We don't get the full royal wedding, for example . . . but really, isn't a glimpse of the dress enough?

Besides, the true tests in these new episodes have to do with Elizabeth's clumsiness with intimate acts of diplomacy, mainly hitting her in the form of two forces of nature – Diana being one of them and Prime Minister Margaret Thatcher the other.

In this regard Gillian Anderson initially struggles to ease into Thatcher's boiled leather persona. Her introductory moments are entirely over the top and verging on cringeworthy, to the point that it nearly looks and sounds like her jaw might break off. But she soon relaxes her grip on Thatcher's mannerisms, and what emerges afterward is nothing short of masterful.

Corrin immediately achieves a balance between the coquette and energetic idealist we picture Diana to be, and her performance invites the viewer into the Princess's interiority almost immediately. Plainly she studied the late Diana Spencer's mannerisms and expressions, and when she cuts her eyes to the side or tilts up the corner of her mouth, the resemblance is uncanny. But Corrin carefully ensures her impersonation doesn't override the portrait of who Diana was (in Morgan's estimation, we should say) which allows her to play off of Colman's queen as opposed to doing battle with her performance.

Both Corrin's and Anderson's representations define this section of the Queen's life in ways that transform "The Crown" and our view of Elizabeth and our estimation of who these people are. Each of them wrestle with the weight of duty and the obligations of motherhood; the Queen and the Prime Minister spark a rivalry straightaway when it becomes apparent that their personalities don't mix. But with Diana as a contrast, the Queen is suddenly less regal and a good deal stonier.

These new episodes also force Elizabeth to examine her connection to the world she has been tasked to mother and safeguard, which surprises her when one of her subjects, Michael Fagan (Tom Brooke), breaks into her bedchamber and implores her to take hard look at what Thatcher is doing to her country.

Of course in Buckingham Palace she only has a limited view of the world beyond the gates; when Fagan, who lives in a council estate apartment in a blighted London neighborhood, tells her where he's from his queen can only ask, "Is it lovely?"

Incredibly, and intentionally on Morgan's part, Elizabeth still comes off as more human than Thatcher, whose steely vision of Britain and its subjects is spelled out with the same level of cold honesty that she employs to appraise her children.

An episode titled "The Favourite" is inspired by Thatcher's smooth and unrepentant declaration that she loves one of her twins more than the other, which tosses Elizabeth into a spin: How can a good mother admit with such casual certainty that she doesn't love her children equally? To this, her husband Phillip (Tobias Menzies) simply answers that every parent has a favorite, even her – and challenges her to figure out who that is among her four children. (Those familiar with the Windsors and caught up on recent events can probably guess which one it is.)

The humor woven through the season born out of stiff propriety forefronts what "The Crown"  has in some ways been working toward since its beginning, which posits that the Queen took such care and passion to be an impeccable regent that she failed to be an adequate mother or fully embrace her humanity. And this places Elizabeth, first through Foy's rendering, then Colman's, on a path destined to collide with Diana, a woman depicted here as insistently maternal and personable, setting her up for despair.

The People's Princess was never going to win with a family so insistently chilly. Nevertheless, Morgan doesn't sacrifice any of his characters and the real people they represent unnecessarily. Instead, the gist of "The Crown" is that happiness, warmth and caring are luxuries the Windsors, symbols of a nation and its wealth, are not allowed to have. We can then see why Diana's natural popularity utterly baffles and enrages the rest of the royals even as it raises their standing in the world.

Josh O'Connor evolves Prince Charles from a tragically awkward young adult into a full-bore petulant man-child who traps himself with Diana out of propriety while he pines for Camilla Parker Bowles. The real Camilla, Duchess of Cornwall should really thank Emerald Fennell for shaping her performance to present Princess Diana's primary obstacle to happiness with Charles as a pragmatic woman who handles her less-than-ideal romantic circumstance with aristocratic strategy. Poor Diana never had a chance.

She, Princess Anne (Erin Doherty) and all of the women in this family or close to it bear the weight of the world while sublimating their unhappiness. But if there's a character who gives sadness an aura of glamour, it's Helena Bonham Carter's Princess Margaret – a woman can feign being above it all until tradition once again interferes with her life and bumps her into obsolescence. Bonham Carter is a central delight in this season, and it's bittersweet to bid her farewell along with the rest of the cast; the series' final two seasons transition into the Queen's golden years and has Colman passing the scepter to Imelda Staunton, with Lesley Manville taking on Margaret.

It all adds up to a bittersweet finish, and perhaps that makes it a welcome departure from the brutishness of this year. We all hunger for some kind of calm, even the type that haunts more than it soothes. The glory of "The Crown" is that we can savor it slowly, and drop in midstream and appreciate the order in its regal temperament. After all we've been through, it suits our mood.