Many of the wins were foregone conclusions, but Awkwafina, Ramy Youssef, and Michelle Williams made it worthwhile 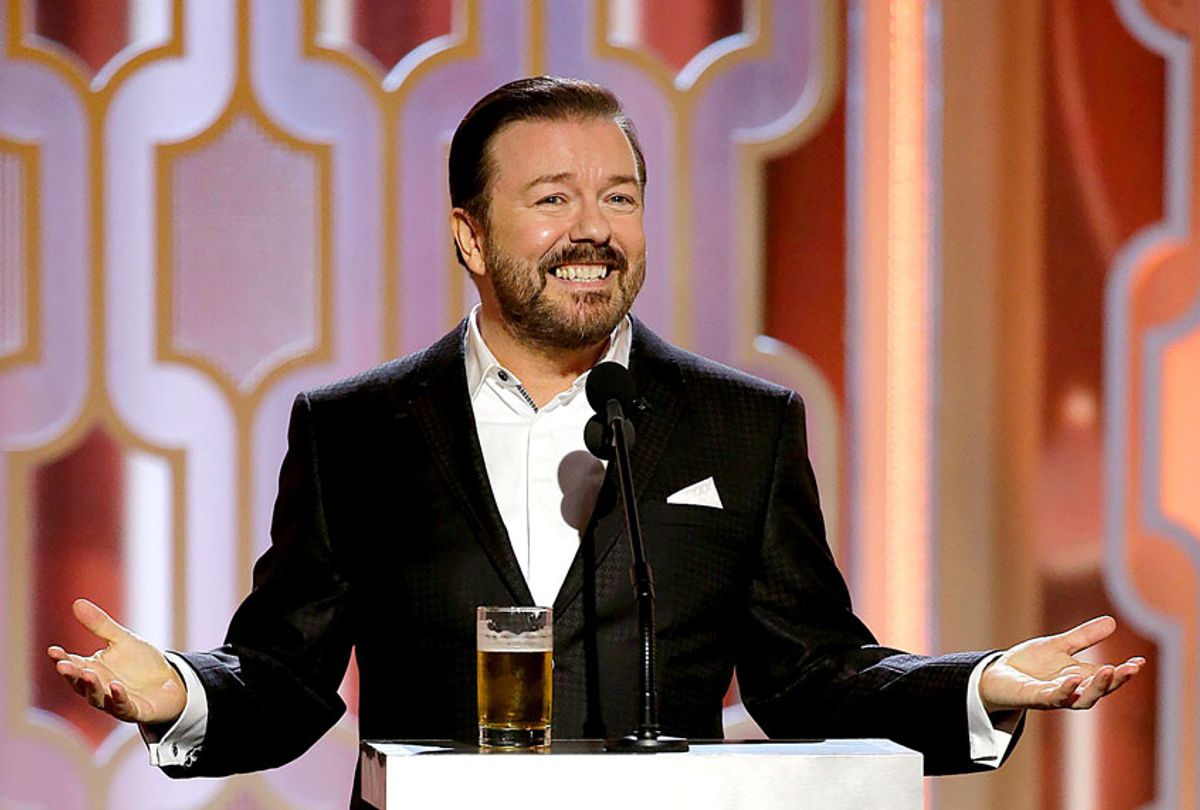 For a number of reasons, NBC’s 77th Golden Globes telecast on Sunday night felt like the least consequential in recent memory. It’s not exactly a mystery as to why that is. The continent of Australia is on fire, and the President of the United States is goading  Iran into further aggression. We’re about to enter one of the most toxic presidential campaign seasons of our time.

But in times such as these, an awards broadcast can serve some purpose beyond distraction — even a show whose claim to fame is catching celebrities at their drunkest and loosest. Globes speeches do tend toward the colorful and give the censors a workout. But they also can be a comfort. Remember Oprah Winfrey’s uplifting acceptance speech at the 75th Golden Globes, where she was honored with the Cecil B. DeMille Career Achievement award?

For the few minutes during which she spoke, it felt as if that storied arc of the moral universe might actually bend back toward justice. Not in that moment, but perhaps eventually.

Sometimes, though, the best professional entertainers and hosts also soothe the audience by using their role and comedic skill to punch up and shame the devils in power. Strangely — no, miserably — Ricky Gervais did very little of this in his fifth (and supposedly final) go-round as host despite the commercials assuring us of his sarcastic unpredictability.

Gervais got in a dig or two about Harvey Weinstein a day before his trial was to begin, pointing out that many of the people in attendance worked with the disgraced producer in full awareness of his crimes and misdemeanors.  ("You did it! I didn't," he said in one of his last off-the-cuff quips of the night. "You did it. Shut the f**k up.")

Despite this, his hosting performance on Sunday was as far from surgically impulsive as one could imagine. Instead of alchemizing our anxieties into laughter, he opted instead to take aim at the usual suspects, as in the rich people getting soused at the tables in front of him and celebrating the plant-based menu.

Fair enough. But that statement should have been a gate-opener for a no-holds-barred monologue in which anything could happen. No such luck.

“I came in a limo tonight ,” he cracked for starters, “and the license plate was made by Felicity Huffman.”

With that, the camera cut to this year’s Cecil B. DeMille Award recipient and America’s Favorite and Least Offensive Person Tom Hanks, who looked none to pleased or comfortable or even sure as to how his face should be arranged.

Carol Burnett Award honoree Ellen DeGeneres was similarly slack-jawed though less obviously than the man who played Mister Rogers. Then again, maybe she was rehearsing her adorable, signature DeGeneres comedy act-as-acceptance speech in which she thanked her non-existent husband/beard Mark and told her fictional children to go to bed.

Gervais also floated a few #MeToo jokes and dropping titles that would have been timely additions to the 76th Golden Globe Awards’ opening monologue, including Ronan Farrow, “Surviving R. Kelly” and “Leaving Neverland,” with those two early 2019 titles tossed in to set up a rimshot at the expense of Netflix’s late 2019 film “The Two Popes,” but you get the drift.

He shoved in a punchline about Jeffrey Epstein, fully ready for the groans and then he doubled down:

You may recall that in 2019, neither the Oscars nor the Emmys had hosts, which worked better for the former than the latter. The Oscars had enough glitz, excitement, and controversy surrounding it that no ringmaster was required. The Emmys were built around a few gigantic shows — “Game of Thrones,” mostly — but its failure can be chalked up to to Fox’s despicable production choices as opposed to any celebrity gaffes.

The win cancels out the loss, and what that result tells anyone who cares is that there’s no concrete answer as to whether award show hosts are indeed necessary. But Gervais’ gleeful face-plant actually highlights the fact that a good host can make up for a lot of shortcomings for a ceremony that is only halfway consequential.

Meaning, the Golden Globes are primarily important as a barometer for Oscar nominations, and in that regard a few of Sunday night’s victors were exciting. Awkwafina’s best actress win for “The Farewell,” for instance, is a pleasant upset and solidly puts her in the running for an Academy Award nod. That’s an important score for inclusion in a Globes crop widely criticized for being very white.

Awkwafina's win also makes history: she's the first Asian actress to ever win  a Golden Globe in the category of Best Actress in a Motion Picture – Musical or Comedy.  Elsewhere another woman, "Joker" score composer Hildur Guðnadóttir, became the first solo female winner for Best Original Score and the second woman to ever win the award.

Otherwise, the top film wins were predictable and acceptable: The wins for “1917” for Best Drama,” “Once Upon a Time . . .  In Hollywood” for Best Musical or Comedy (although it is neither) and their respective directors Sam Mendes and Quentin Tarantino, and "Hollywood" star Brad Pitt, felt inevitable even though the wins for Mendes' film blindsided a number of film experts.

Similarly betting money must have been on Joaquin Phoenix snagging Best Actor in a Drama for “Joker” and Renee Zellweger for Best Actress in a Drama for her work in “Judy.” Hollywood Foreign Press Association voters love period pieces and films about Hollywood, fame, and famous Hollywood legends, which also augured Taron Egerton’s win for “Rocketman.”

Surprised though I was that Bong Joon Ho's "Parasite" didn't have a strong showing, its Best Foreign Picture win is well deserved.  On the flipside it's heartening that voters weren't seduced by Martin Scorsese's overly hyped, overly long Netflix film "The Irishman"; it was shut out entirely. Besides, Laura Dern's Supporting Actress win for the streaming service's "Marriage Story" is more satisfying.

In terms of impacting television, the Globes barely rate. Unless, of course, the voters do something right. Naming Ramy Youssef Best Actor in a Musical or Comedy for Television for his work in Hulu’s “Ramy,” for example, matters deeply in this moment in history. Islamophobia and xenophobia drive foreign policy and have brought us to the brink of war.

But inside the Beverly Hilton’s International Ballroom, Youssef, a stand-up comedian and a devout Muslim, opened his acceptance speech with a joyful “Allahu Akbar” – which translates to “God is most great” – before jovially acknowledging that most of the people in that room had no clue as to who he is.

“Everyone’s like, ‘Is this an editor?’” he joked. “Yeah, I’m as astonished as everyone.” Joking aside, “Ramy” is a deserving win for a number of reasons. So, too, is HBO’s “Succession” and its star Brian Cox, as well as Amazon’s “Fleabag” and its creator and star Phoebe Waller-Bridge.

A few of the TV upsets were surprising in the best sense, too. People who thought Meryl Streep’s supporting actress win for “Big Little Lies” was a lock may have been shocked to see Patricia Arquette swoop in and claim that hardware for her work in “The Act,” save for the fact that HFPA voters love to reward previous winners. Even so, Arquette did top work in the Hulu series.

Russell Crowe’s victory for Showtime’s “The Loudest Voice” was to be expected; awards show voters love prosthetic transformations and huge performances, and Crowe checked both boxes when he disappearing into the latex simulation of Roger Ailes’ skin.

Gervais may have been derelict in his duty to lighten the mood or create warm memories, but a few of the winners and presenters gave us their own moment worth remembering.

Tiffany Haddish may be the only performer who can present the award for Best Television Limited Series or Motion Picture Made for Television to “Chernobyl,” and say the title as if she were announcing herself at a house party hosted by Pitbull, and charm the pants off of the audience nevertheless.

And in the category of political speeches, the worst weren’t self-aggrandizing as much as they were messy. Phoenix, in accepting his individual achievement for “Joker,” rambled on and pleaded with his peers to do their part to save the planet by refraining from flying around in their private jets so much. Arquette fulfilled her Cause of the Year quota by mentioning (understandably) her concern over Australia’s fiery climate disaster.

But the most poignant speech of the evening went to Michelle Williams, marking her Best Actress win for her work in “Fosse/Verdon” by voicing her support for abortion rights. “I'm grateful for the acknowledgement of the choices I've made, and I'm also grateful to have lived in a moment in our society where choice exists, because as women and as girls, things can happen to our bodies that are not our choice,” Williams said.

Now, I know my choices might look different than yours. But thank god, or whomever you pray to, that we live in a country founded on the principle that I am free to live by my faith and you are free to live by yours.

So, women, 18 to 118, when it is time to vote, please do so in your own self-interest. It's what men have been doing for years, which is why the world looks so much like them. But don't forget, we are the largest voting body in this country. Let's make it look more like us.

This flies directly in the face of every conservative who complains about industry awards shows being inappropriately political or what Gervais himself said at the top of the night.

“If you do win an award tonight, please don't use it as a platform to make a political speech, right? You're in no position to lecture the public about anything,” he spat. “You know nothing about the real world. Most of you spend less time in school than Greta Thunberg. So if you win, right. Come up, accept your little award. Thank your agent, and f**k off.”

For the sake of giving an otherwise numbed-out show a touch of spirit, we’re glad Williams, Arquette, and the rest ignored Gervais. Frankly, he made that far too easy to do.