With a profound speech, the world's most influential woman makes an unremarkable awards show one for the ages 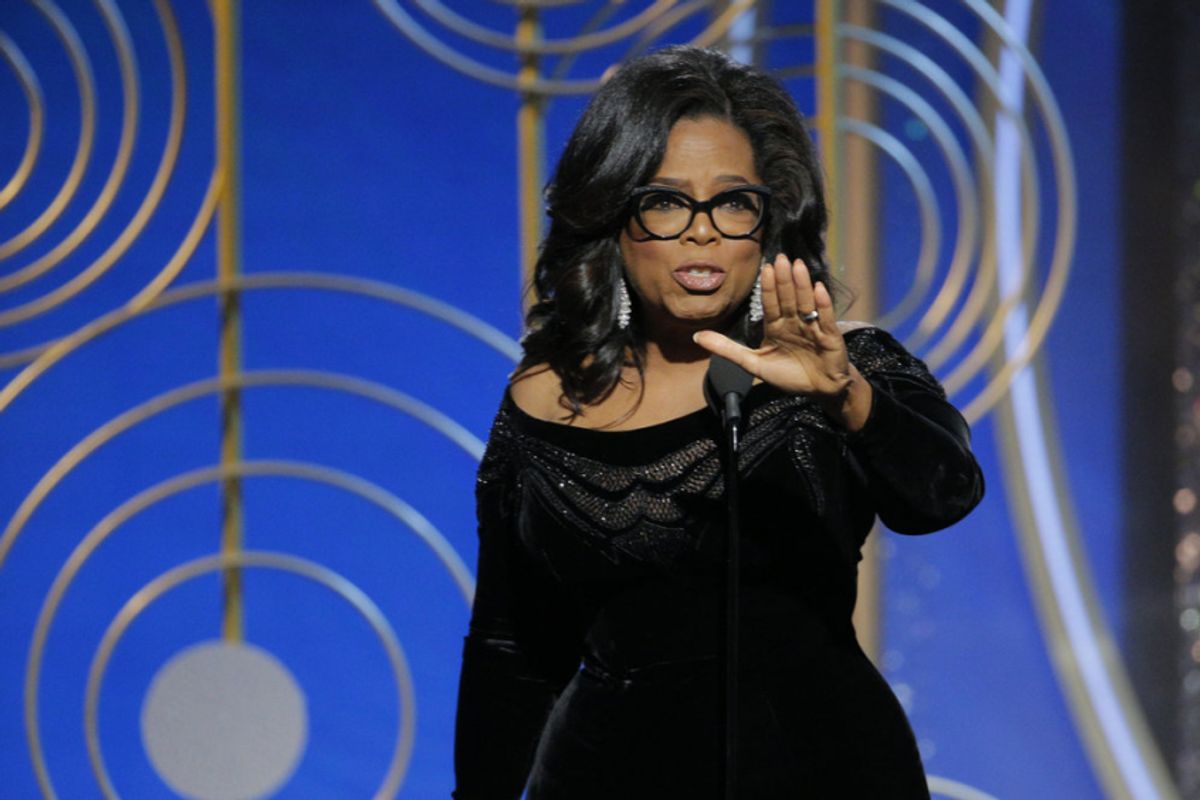 Sunday night’s telecast of the 75th Golden Globes exemplified everything great and awkward about the industry’s highly publicized efforts to confront the surge of sexual harassment scandals and embrace the age of #MeToo.

As planned and well-publicized, the pre-show couture parade of black gowns, many relatively demure in comparison to past showings, provided a respectable show of solidarity with the embattled women of the world. Social media captured it under the umbrella of #WhyWeWearBlack, part of the effort to support the recently established Time's Up initiative, a celebrity-backed endeavor dedicated to confronting abuse of power and promoting equality in the workplace.

Several nominees brought activists as guests, notably Meryl Streep, who walked the carpet with the director of the National Domestic Workers Alliance, Ai-jen Poo, and Michelle Williams, who was joined by #MeToo founder and civil rights activist Tarana Burke.

But this is still the Golden Globes we’re talking about, an awards show with a reputation for getting A-list celebrities elegantly wasted. Sobriety, it appeared, reigned this time around; certainly more celebrities demonstrably held their liquor with more dignity than in previous years. But blips of tonal dissonance surfaced here and there, nevertheless.

The red carpet teams struggled to match the mood the industry attempted to establish. NBC's team, led by Carson Daly, didn't seem to have a clue how to navigate the "Why We Wear Black" efforts. One unfortunate example involved a split-screen take during NBC’s pre-show coverage: On the left, a stately Viola Davis made a passionate statement about equality, while on the right, the camera operator did a full vertical pan down “I, Tonya” star Margot Robbie’s form with the subtlety of a hungry kid licking a Popsicle.

During the telecast itself, following a number of acceptance speeches peppered with declarations of female empowerment, independence and echoing cries of “Time’s Up,” came this jarring, upbeat introduction of a presenter: “And now, from ‘Fifty Shades Freed,’ Dakota Johnson!”

Blessedly, lending us wings to rise above it all was Cecil B. DeMille Award-recipient Oprah Winfrey, fiery and luminous. The media mogul’s acceptance of the career honor defined the evening more assuredly than Seth Meyers’ able if understated performance as host, or any other moment in the three-hour, eight-minute broadcast.

Thundering through a speech that cut through the perfume of self-congratulation and social justice-as-accessorizing, Winfrey hit the pause button to remind the audience just how much work still needs to be done. She acknowledged the awe-inspiring power inherent to standing on that stage, describing how she felt at seeing Sidney Poitier accept such recognition so many years ago. Without pretension, she recognized what seeing her occupy that same rare air meant to younger women determined to take their shot in a world that long has stacked the deck against them.

Then Winfrey used her power to invoke the name of a black woman unknown to most: the main subject of the 2017 documentary “The Rape of Recy Taylor.” Briefly recounting the story of her case, Winfrey explained that in 1944, Taylor was walking home from a church service when she was abducted by six armed white men, raped and left by the side of the road.

Through the NAACP and the efforts of Rosa Parks, Taylor sought the justice that was denied her, and, Winfrey revealed, she died 10 days ago, shortly before her 98th birthday.

“She lived, as we have lived, too many years in a culture broken by brutally powerful men,” Winfrey said. “For too long women have not been heard or believed if they dared to speak their truth to the power of those men. But their time is up. Their time is up.”

Has the Globes ever been capable of genuinely moving viewers to tears? If so, it’s been a long while. Expecting Winfrey to deliver a rousing oration is reasonable, but the level of emotional release sparked by her words felt unprecedented and necessary. Entertainment industry visibility has been crucial to maintaining the momentum of #MeToo and keeping the conversation about gender inequity alive and top-of-mind, but Winfrey employed her singular talent for bridging privilege and fame to everyday people, cementing the night's efforts as something more than simply fashion. Her gratitude at the honor bestowed upon her was exceeded only by her honest deference to the labors of all women who quietly keep going while enduring abuse, "because they, like my mother, had children to feed and bills to pay and dreams to pursue.”

It was entirely in line with an evening that balanced the completely expected with a few moments that were refreshingly unpredictable, starting with the symbolic sartorial blackout for the Globes red carpet and ending with Natalie Portman’s sucker punch to the nads in the wake of Winfrey’s speech. As if she knew people wondered how anyone could follow that tour de force, Portman introduced the best director category at Ron Howard’s side by way of brightly stating, “And here are the all-male nominees!” with wicked precision. "The Shape of Water" director Guillermo Del Toro won the category this year, but Portman won the sisterhood for the foreseeable future.

It’s appropriate that the 2018 Globes telecast is likely to be remembered more for the contributions of the women presenting and honored than for its male host. Don't get me wrong, if the HFPA was stuck on picking a man for the gig, Meyers was the best choice. Opening with, “Good evening, ladies and remaining gentlemen!” Meyers then addressed the males in attendance with, “this is the first time in three months it won’t be terrifying to hear your name read out loud!”

Following a few cursory swipes at Donald Trump, Meyers reserved the harshest burn for the town’s exiled producer Harvey Weinstein. Referring to him as “the elephant not in the room,” Meyers predicted that Weinstein will return in 20 years, “when he’s the first person booed in the In Memoriam.”

Clearly this was not a year or a time for a male host to aim for Ricky Gervais levels of outrageousness. But then, the Hollywood Foreign Press isn’t exactly an organization known for making left-field choices as much as inexplicable ones. Even in that respect, this year’s wins were more or less by-the-numbers, an acceptable balance of pleasing choices and eye-rollers.  As expected, “Lady Bird” scored a Globe in the Motion Picture Musical or Comedy category, with its star Saoirse Ronan winning best actress.

“Three Billboards Outside Ebbing, Missouri” topped the drama field in addition to netting wins in supporting actor for its star Sam Rockwell, lead actress for Frances McDormand, and best screenplay. Gary Oldman won the drama best actor honor for his portrayal of Winston Churchill in “Darkest Hour,” ticking the HFPA box for rewarding portrayals of historical figures enhanced by prosthetics.

Representative of the Globes’ penchant for favoring names over performances is James Franco’s best actor drama win for “The Disaster Artist.” Franco brought his film’s real-life subject Tommy Wiseau onstage with his brother David, making the farfetched wishes of all involved come true. The entertainment industry has enabled Franco’s powers as dream weaver for some time now, but that win also would have us believe that Franco’s work was better than Daniel Kaluuya’s performance in “Get Out.”

Experts may argue whether the Globes still serve as a reliable barometer to predict favored contenders for the Oscars. Maybe so. Those who cover TV generally agree they have no bearing on the Emmys. But in a surprising turn, none of last night’s TV winners inspired a face palm in frustration, even if there were no serious upsets. “Big Little Lies” cleaned up, of course, scoring wins in the limited series or TV movie for the series itself, as well as Nicole Kidman for best actress, Alexander Skarsgård for best actor and Laura Dern for supporting. Its sweep mirrors its Emmy popularity, aligns with the politics of the moment and rewards movie stars for doing television, all favorite practices of HFPA voters.

“The Handmaid’s Tale” won for best drama series, and Elisabeth Moss clinched the Globe for best actress in a drama, a feat likewise already achieved at the Emmys. Ditto for Sterling K. Brown’s best actor in a TV drama win for “This Is Us.”

More refreshing was Ewan McGregor’s win for best actor in the limited series or TV movie category for his work in “Fargo,” beating a field of heavy-hitters that included Robert De Niro (“The Wizard of Lies”), Jude Law (“The Young Pope”), Geoffrey Rush (“Genius”) and Kyle MacLachlan (“Twin Peaks”).

Another unexpected turn was Aziz Ansari’s win for best actor in a TV series, musical or comedy for “Master of None,” making him the first Asian male actor to win a best actor TV Globe.

This is where Sunday’s self-congratulatory exercise became a stretch-fest, implicitly proving Winfrey’s point that the march to equity has taken far too long, and there are still many miles to go.

As an example, the victory of Amazon’s “The Marvelous Mrs. Maisel” in the TV series, musical or comedy is well-earned, and the same is true of its star Rachel Brosnahan’s best actress win. And Brosnahan’s acceptance speech brimmed with gratitude at being able to play a bold, brilliant and complicated woman while acknowledging that many other women’s stories need to be told.

Indeed, her win came at the expense of Issa Rae, one of very few women of color nominated in this round of Globes: In addition to Rae, Mary J. Blige, Octavia Spencer and Hong Chau received nominations in the film category for actress in a supporting role and . . . that’s that.

That also means Winfrey was the only woman of color to go home last night with an individual honor from the HFPA.

One certainty is that the 2018 Globes telecast set a bar for the Oscars broadcast to meet, if not clear, in terms of representing women and their struggles in the industry. Much of it will be lip service. Culture places an unnatural level of import on awards telecasts, grand and glamorous celebrations of achievements that, in the wider scope of history and social change, play only a small part in moving the needle. We celebrate the various firsts they mark and use those ground-breakers to gauge the speed of social progress. Hollywood enjoys congratulating itself on that front time and again. But even now, some 75 installments into the Globes' history, there remain barriers to be shattered, progress to be gained, so very much work to be done.

Oscar may want to call upon Oprah for an encore.