A horror movie for our time: "Get Out" is frighteningly topical 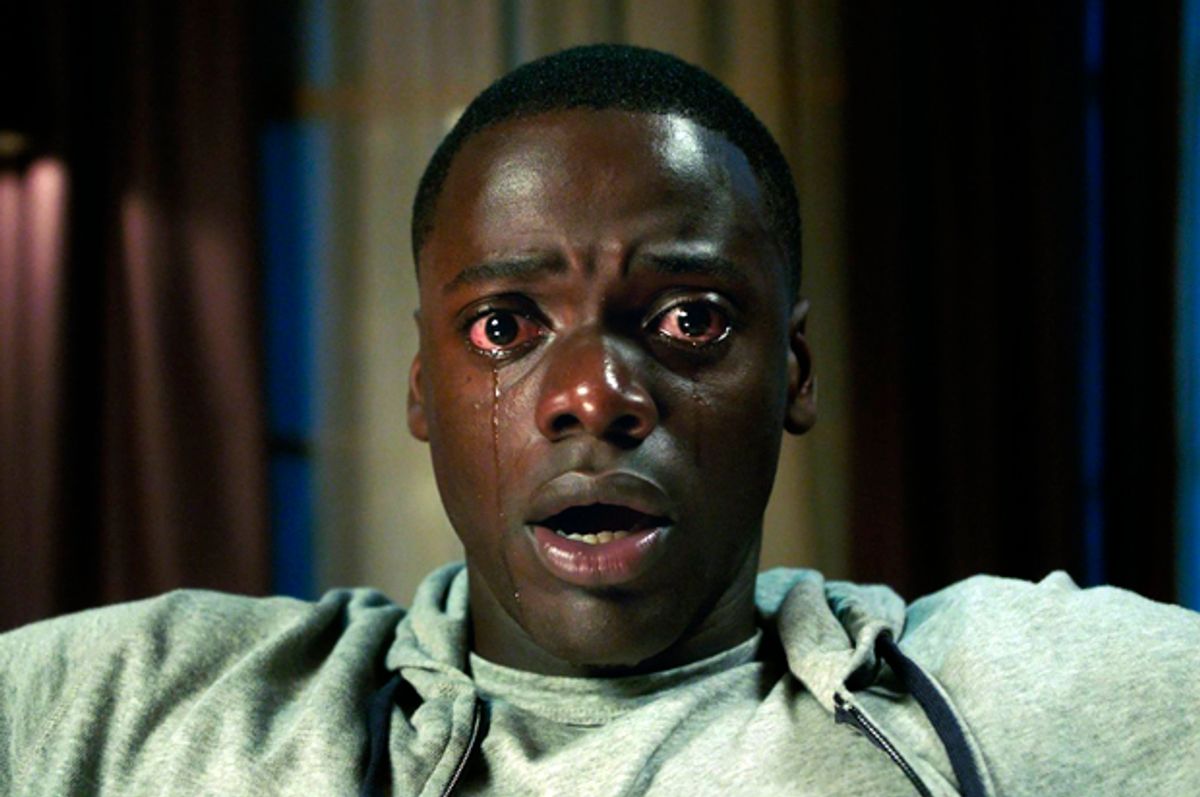 Get Out (Universal Pictures)
--

Jordan Peele's highly anticipated — and justifiably hyped — cinematic directorial debut "Get Out" would be terrific even if it didn't happen to be so goddamn timely. But coming a mere month into a new administration that's its own special nightmare, the film's racial anxiety horror feels all the sharper and more eerily resonant.

Early on in "Get Out," Chris, a talented young photographer (played by British actor Daniel Kaluuya) is getting ready to spend a weekend with the family of his beautiful girlfriend Rose ("Girls" co-star Allison Williams, doing a knowingly milk-drinking, "Dirty Dancing" soundtrack-listening white chick shtick). Packing his "cozy clothes," he asks, "Do they know I'm black?" — a question she finds laughably outdated. Her dad, after all, would have voted for Obama three times if he could have. But even before they arrive at the house, Chris begins to comprehend that Rose's lily-white suburb holds terrible secrets.

At first, Chris believes his discomfort to be just an affirmation of what he already expects from wealthy, self-identified liberal white people. Rose's family — led by her parents Dean and Missy (played with just the right amount of creepy warmth by Bradley Whitford and Catherine Keener) — call Chris "my man!" and speak enthusiastically of Jesse Owens and Tiger Woods. Chris has clearly seen it all before, that privileged condescension from people whose only regular interaction outside their race is with the people who serve them. But in this case, the relationship Dean and Missy have with their docile black maid and groundskeeper has a more ominous energy. And when a lone black guest shows up at a family party, the man's similarly odd behavior raises Chris's suspicions that something seriously weird is going on in this pumpkin spice latte, "Gilmore Girls" town. In time, a conspicuously locked door is unlocked, bad people start doing bad things and Chris finds himself desperately trying to heed the film's titular warning.

Plenty of horror films aim to pay homage to their classic cinematic forerunners, but few ever so skillfully balance referencing the old while carving out interesting new turf. "Get Out," on the other hand, is at once a meticulous throwback and a bold original. Among its most obvious ancestors are "The Stepford Wives," "Invasion of the Body Snatchers," "They Live," "The 'Burbs" and "Rosemary's Baby" — stories in which the harrowing menace comes wrapped in a bland, neighborly smile. Its dark sense of humor — along with its opening scene of an unsettling crime — owes a debt to the "Scream" franchise. The title is a nod to "The Amityville Horror," another film in which a nice house and manicured lawn are huge tip-offs there's evil lurking about. And its "meet the parents" angst has its DNA in movies ranging from "Guess Who's Coming to Dinner" to, well, "Meet the Parents."

But what makes the film exceptional is its skillful distillation of racial anxiety into true horror. A black man is shown to be correct in his unease in walking around a desolate white neighborhood. Seemingly offhanded insensitive comments are, as it turns out, not offhanded at all. And when, late in the film, a police car shows up, is it any wonder the audience exudes a palpable wave of nervous suspense? Yet the cleverness of "Get Out" goes even deeper. This isn't a facile fable about the very real evils of racism, one in which the villains are typical mouth-breathing rednecks. By focusing the storyline on a particular form of racism — the kind that's often disguised as peculiar envy — "Get Out" reveals something more insidious.

Nearly every white person encountered by Chris perversely flatters him — praising with barely concealed hostility his "genetic makeup" and presumed physical and sexual prowess. Even his eyes are a source of blatant jealousy. And it's in those uncomfortable exchanges that the film delves into the deep damage wrought from white insecurity, from its frustrated aspirational bigotry. It's a damning commentary on the people who insist they can't possibly be racist because of the athletes and musicians they admire.

There's more, of course. It'd be difficult to name another film that so effectively deploys horror's classic, body-snatching fear of forced assimilation to comment on modern race relations. Likewise, the ways in which Chris' traumatic childhood memories are weaponized against him are a sharp rebuke to noblesse oblige.

It also wouldn't be an offering from Jordan Peele — one half of Comedy Central's genius "Key & Peele" and the film's screenwriter as well — without regular infusions of bracing humor. (Much of it comes from comic Lil Rel Howery as Chris' reality-checking buddy, a Transportation Administration Security agent who knows a fishy situation when he smells one.) And while its central drama revolves around race, "Get Out" also slips in a pointed gender flip. Speaking with BuzzFeed recently, Peele said he aims to "disrupt the historically male gaze of the horror tradition" by having the protagonist be a black man instead of the usual white girl in jeopardy. (The original "Night of the Living Dead" serves as a classic exception.) As Chris, Daniel Kaluuya, who previously navigated the surreal in the haunting "Fifteen Million Merits" episode of "Black Mirror," brings profound expressiveness to the role. He's at once believably vulnerable and resourceful, and he's gut punchingly terrific when he's being perfectly still.

As a straightforward horror tale, "Get Out" doesn't always entirely come together. The explanation for what's really going on in that spooky house isn't as satisfying as the enigmatic buildup. But it's a worthwhile, jump-out-of-your-seat journey nonetheless. More significant, it is also very much of a story of our time, one in which comfortable white people who brag about whom they vote for are anything but the good guys.