"It's blood memory": Jurnee Smollett on how the horrors in "Lovecraft Country" are felt in real life

"We typically don't get to participate in the fun," the actress told Salon about playing the show's various genres 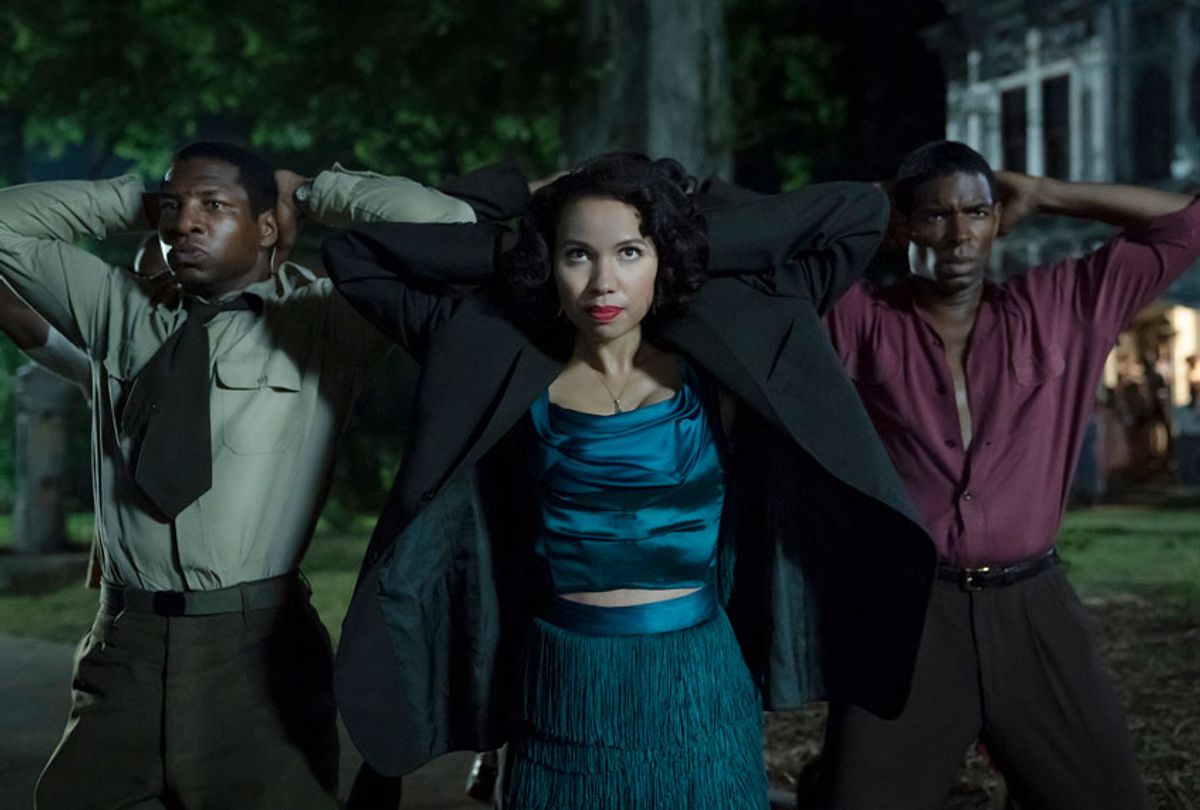 For "Lovecraft Country" star Jurnee Smollett, the concept of fighting for home is part of her own history. Smollett recalls hearing stories about her grandmother being among the first in her family to buy a home in South and the swell of pride connected with that, and the despair in losing it.

I did not ask her if she believes in haunted houses, but that's irrelevant – her "Lovecraft Country" character Leti Lewis surely does. In the season's third episode, "Holy Ghost," Leti moves into a rundown Victorian mansion located in an all-white neighborhood and faces the demon within its walls – a peril more cleanly dealt with than her neighbors' overt racism. That part of the story, sadly enough, is something with which Smollett has some familiarity.

She remembers waking up on the morning of the Million Man March to find one of her neighbors had left a dead fish on her family's lawn, she told Salon recently. "When I was a kid there were derogatory slurs keyed into our car, you know – the N-word and another word about being Jewish, because my mom's black and my dad was Jewish."

Monsters, urban legends and local folklore are generally accepted to be fiction – stories made up to frighten and fascinate or as a warning for children. But haunted house stories are different, because they feel more plausible. If walls can absorb smoke, dusty and mildew, why not concentrated malevolence?

For a series like "Lovecraft Country" – which is to say, a show that embraces many types of horror themes within the context of a family drama – building an episode around a haunted house is as natural as assigning Leti to do battle with it.

Part of the drama's appeal is in seeing Leti handling the heroics, even though the main character Atticus "Tic" Freeman (Jonathan Majors), is a soldier. He's good in a fight, certainly. But Leti has a lone wolf's courage born out of being an outsider, and she's also relentless and resilient, handy traits when it comes to fighting forces from Hell.

"Holy Ghost" not only shows the audience what Leti is capable of, but enables Smollett to take center stage. Much like the central role she played in "Underground," where she first worked with "Lovecraft" creator Misha Green, Leti enables Smollett to wield her physical performance skills while showcasing her extensive acting range.

In a recent conversation with Salon, she talked about the experience of creating a series that's not only entertaining but doubles as a metaphor for confronting the systemic racism that's long been a part of America's history. And to this lifelong social justice activist, Leti and Tic's frightening adventures don't feel entirely like fantasy – especially the ghost story in which she stars. "These stories, we know them," she says. "They're very personal for us."

One aspect of "Lovecraft Country" that struck me as I was watching is that it must have been interesting to be part of such a project at this moment in history. There's been a lot of public interest in "Watchmen" and its role in contributing to conversations we're having about race.

But "Watchmen" opens with an historical event that actually happened – the Tulsa massacre of 1921 – and that many people didn't realize is fact, not fiction. "Lovecraft," on the other hand, speaks to the experience of being Black in America metaphorically, through horror. That places the feelings of confronting racism in a fascinating visual context. We can talk about these experiences, but if someone hasn't lived them, they might not fully believe what we're telling them or understand. So I'm wondering how much you guys talked about that aspect, that quality of the story while you were in production.

For sure. We're all aware of the lethal dangers that happen when our history is overlooked, when the truth is distorted, when our story is not told in its entirety. When textbooks in high schools don't teach it, except for maybe one month out of the year.

As artists, in approaching a story like this, it is personal for us. We actually don't have to sit down and really analyze it because we know it. We live it. It's blood memory, it's familiar, it's ancestral.

So what's it like for you to witness these episodes debuting at a time when people are not just kind of open to talking about systemic racism, but actively engaging with its impact? It's interesting to have this in a context of horror and fantasy when these stories are at their essence a reflection of reality.

I mean, one thing Misha [Green, "Lovecraft Country" series creator] talks about a lot is how the horror of Black safety is very real. Driving while Black is terrifying sometimes. Being the only Black family in an all-white neighborhood is terrifying. It's something I know.

. . . This series is being released as the world is confronting a great awakening and we're having to reckon with the fact we're not just fighting COVID-19. There's another pandemic we're fighting, and that's systemic racism.

There's something that happens when you're forced to bear witness. You can't unsee it. You can no longer say you don't know, because you saw that eight minutes, almost nine minutes of a video of a man losing his life. We as Black Americans, we live it, we know it. And the history, it unfortunately repeats itself. You know, Emmett Till is Trayvon Martin. And I think one thing about "Lovecraft Country" is that yes, it's a very ancestral story is a story about our heroes going on a quest to bring down white supremacy. But we're still on that quest in 2020.

Did you know that much about H.P. Lovecraft before this show?

What I knew about Lovecraft is I knew about the influence he had on the genre, I knew that he was a master of terror. I didn't know he was a racist, honestly, until I read the script. Then I read "Lovecraft Country," the book by Matt Ruff, and then did a deeper dive.

You know, it's a little disappointing when you find out things about people who are held up on such a pedestal. But as a lover of history, I think it's important for us to preserve history and tell it in its entirety.

We need to know the full scope of who these thinkers are or were – who were the founding fathers, truly? Who are the philosophers, when you talk about influence or nation building or a genre building? What was the perspective that they had in building this? When you deconstruct that and demystify it, you can understand it on a deeper level because you need to understand the entirety of the truth.

Let's talk about the production itself. People know you from playing Rosalee in Misha's previous project "Underground." Both that and your role in "Birds of Prey" provided opportunities to embrace the action side of you talents.

But I think there's another significance in your "Lovecraft Country" part in that each episode allows the characters to have adventures in genres that on film at least have traditionally starred white people. So you get to have like a little bit of Indiana Jones, a bit of conspiracy thriller drama, some "Twilight Zone" themes. Did the significance of that ever strike you while you were in production?

I mean, I gotta say it's like you're a kid in a candy store. Because in my career I felt for sure shut out from some of these genres and so many stories. So for Misha to do a real radical reimagining of it, just to have an Indiana Jones adventure type thing – that's one of my favorite rides at Disneyland, by the way. That was the closest I ever got to experience Indiana Jones was to go on a ride, before "Lovecraft Country"! I think as an artist, you want to be able to expand your imagination. You want to be able to access muscles inside of you, whether it's physically or mentally or spiritually, and you don't always get to do that in the roles that they typically write for Black American kids, and then Black females. Or, like, women of all kinds. We typically don't get to participate in the fun.

But that's why it's important for more people to be behind the cameras, owning these narratives because they have been for so long told by cis-straight white men . . . So it's incredibly exciting to be a part of a project where you have people like Misha just allowing you to expand your imagination and play.

You know, I can watch this as a Black woman and appreciate the cultural and historical references and I can also watch this purely from a horror perspective or an action perspective, and those can be very discrete experiences. Are are you hoping that people who may not be familiar with the specific social or historical cues might explore some of that in the course of watching "Lovecraft Country"?

If they are curious enough to go and educate themselves more about it, fine. There's just so much you can accomplish in 10 episodes. We just tell the truth, you know? Leti may walk through the world completely different than [her sister] Ruby. Why is that? They're both fighting the patriarchy and white supremacy. Yet in 1955, there's also other elements that they're fighting . . . And then they resent each other because their choices are so different. But yeah, I'm excited about the conversation it will start, you know, because there are a lot of things that we explore that are really taboo to talk about.

And I don't think that would have been possible to do something like this on TV before – or maybe, not that it wasn't possible, but people seem to be more open to taking in these stories now. Perhaps I'm wrong.

We'll see. But frankly, I don't give a damn if they're open to it or not. I mean, honestly, it's not our job to  pacify them, right? Sometimes we've got to go to ugly places and we just can't apologize for showing the ugly truth. It's the truth!