"Lovecraft Country" is an intoxicating, myth-shattering hero's journey through a map of Black fear 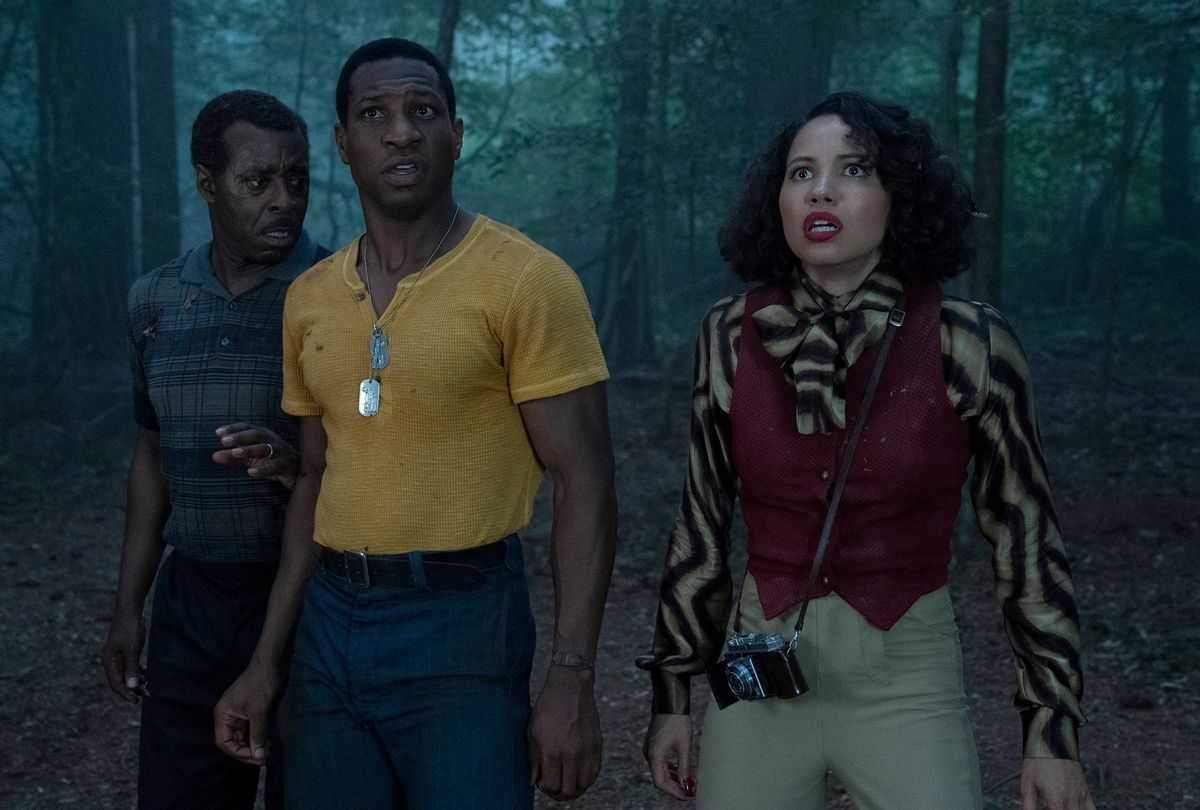 History, both the edited and sanitized version taught in most schools or the closer-to-accurate records unearthed by those brave enough to search for it, can only explain the experience of living while Black in America up to a point. What can't be fully quantified are the innumerable feelings of anger, frustration and fear converging in an invisible boulder that has a weight and a pressure inside the body, a natural survival compass.

That guide transforms would-be simple pleasures – road trips, shopping in unfamiliar areas, moving to new neighborhoods – into an internal negotiation for some of us, one that most white people may never feel, comprehend or even believe, but that "Lovecraft Country" translates into intoxicating, terrifying visual metaphor.

There may be no better illustration of the ever-present threat of white supremacy than to see it manifest as a slimy, many-eyed creature with multiple rows of teeth and a predilection for burrowing into the Earth and hunting under the cloak of night. To understand the danger of pretending an ugly history of crime and murder doesn't exist, it's instructive to cast it as a malevolent, bloodthirsty spirit.

Series creator Misha Green doesn't sculpt "Lovecraft Country" as a didactic piece any more than she conceived of her previous series "Underground" as another brooding drama about slavery. Green's gift is in centering Black characters in blockbuster-style epics. That affection inspired her to present a slavery narrative as an action drama steeped in emotion. Here she seizes the opportunity – and HBO's ample budget – to play around with an array of cinematic genres and tell many stories within the course of a single, season-long quest.

"Lovecraft Country" opens with a midcentury sci-fi scene – an explosive battle sequence that introduces Atticus "Tic" Freeman (Jonathan Majors), a soldier fighting for his life in the Korean War. Without warning the scene seamlessly merges into a dazzling fireworks storm, otherworldly bodies and squid-like horrors. This is our earliest view inside the hero's mind.

Otherwise Tic navigates in the real world of 1950s America, where the hardened Korean War veteran is not much safer than he was on the battlefield. Initially he heads home to Chicago on a quest to find his father Montrose (Michael K. Williams), who has gone missing. Soon he's joined on his journey by his childhood friend Letitia Lewis (Jurnee Smollett) and his uncle George (Courtney B. Vance, who weighs in on the horrors in a recent episode of "Salon Talks").

Like Atticus, George loves pulp novels and makes his living as the publisher of "The Safe Negro Travel Guide," the story's version of "The Negro Motorist Green Book" by Victor Hugo Green. George sees the trip as an opportunity to add a few entries to his guide; Leti's in it for the adventure, and to run from the rejection of her estranged sister Ruby (Wunmi Mosaku). Hence the trio heads out to Ardham, Massachusetts in the family's spacious station wagon – and true to the title's promise, encounter an assortment of monsters, mostly of the human variety.

"Lovecraft Country," based on the 2016 novel by Matt Ruff, refers to the New England territory where H.P. Lovecraft set many of his stories. The Northern placement of the story is intentional on Ruff's part and Green's in that it shatters the longstanding myth among white Americans that vicious racism is a relic of the old South, that somehow the North was more benevolent and enlightened.

Naturally the title also serves as a lure for Lovecraft aficionados, long drawn to his slimy, gooey invertebrate renderings of pure evil. If that's what you're looking for, "Lovecraft Country" obliges straightaway by raising up a few made-for-TV shoggoths, placed on the trio's path as a point of contrast with the ordinarily lethality of human malevolence; despite the racists sharing a common country and language with their prey, it's enraging to realize Tic, Leti and George have no chance of reasoning with them or the mindless monsters hunting them down.

All this is before the three encounters what may be most dangerous menace of all: an astronomically wealthy Aryan blueblood Samuel Braithwhite (played by Tony Goldwyn) and his enigmatic daughter Christina (Abbey Lee), who have their own plans for Tic and his companions.

It's fortunate that "Lovecraft Country" looks and feels as expansive as it does, because it houses a lot of its subplots and themes under its roof. Episode to episode, Green, who writes the first four and is credited on every script, takes care to tell the stories of each member of Tic's circle of relations and friends, tailoring its terrors accordingly.

Editing and stylistic choices embed a clever sense of humor and knowing within each story. This is a show that assumes a familiarity with its audience by way of including anachronistic riffs of modern music over '50s scenery, with one of its most inspired sequence set to an instantly recognizable 1970s sitcom theme. All of the soundtrack choices ground the surreal nature of what we're seeing in granite truths, and audio overlays of recitations by the likes of James Baldwin and Gil Scott-Heron boldface the subtext.

Such flourishes link this fictional depiction to our own time while accentuating the limitless nature of its brand fantasy – at times reminding us, maybe, that it's OK relax into this world.

These shifting storytelling sands might not work if they weren't encased in the main quest's plot. This also means the energy varies in each hour, giving the season's flow a fluid unpredictability that viewers may either embrace wholeheartedly or find jarring.

It helps to regard "Lovecraft Country" as an anthology veiled in a family story, making it more along the lines of "The Twilight Zone" than the average quest-driven drama, not to mention brand-aligned with Jordan Peele and J.J. Abrams, fellow executive producers on the series along with Green.

Such freedom allows Green and her collaborators to show their stunning command of the energy and spirit the story's blending of science fiction and horror requires. It means that every slice of the audience, from monster movie lovers to Dan Brown-style conspiracy thriller nuts and Indiana Jones fans, will find something to enjoy here.

In keeping with the genre, Green and her writers expand the horror metaphor to dance with other social themes – feminism, sexism, patriarchal imposition and trauma – while also depicting how white supremacy asserts itself even within the relatively safe space of Tic and Leti's close-knit community and their own families.

The main story may hinge on Atticus, but "Lovecraft Country" gives each of its women their individual star turns, Leti most of all. Smollett already announced herself as a star on the rise in "Underground" and the films she done since, including the feminist grenade of "Birds of Prey." Her smoldering presence in this series deserves to lead to more work in premium projects.

She's an extraordinary force whose work complements Mosaku's might and Aunjanue Ellis's glowing performance as George's wife Hippolyta, a woman forced to swallow her career ambitions. Lee's chilly rendition of Christina, a character Green created for the series, gives them an engaging adversary to contend with, and given where Tic's mission takes everyone she lends a wild streak to all the grimness.

Pulp science fiction, the kind that Tic loves and influences "Lovecraft Country," is defined by heroes with hideous origin stories who go on to have fantastic voyages. Tic is forced to defend one such hero, John Carter, when another travel companion asks about the book he's reading, "A Princess of Mars" by Edgar Rice Burroughs.

Carter, Tic explains, was a Confederate captain who finds himself mysteriously transported to the Red Planet, and his fellow traveler questions how a Black man can square himself with reading a story about a man who fought for slavery.

He replies that stories are like people, that their author doesn't necessarily make them perfect, and it's up to the reader to try to cherish them and overlook their flaws. He owns his love of these stories, and later on his and George's knowledge of the rules of these world's help them survive. But even in this acknowledging simple joy, Tic is obligated to haggle with his own conscience and reconcile with the ugliness.

Fantasy-loving Gen Xers are more likely to associate Lovecraft with creating the Cthulhu mythos that helped spark the 1980s and '90s "satanic panic" than to recognize the enthusiastic racism, sexism, anti-Semitism and xenophobia central to his work, formalized in his writing of one of the vilest poems in existence.

"Lovecraft Country" makes sure we don't forget that part of Lovecraft's legacy by expressly mentioning the author's name in association with that poem, even saying its full, offensive title out loud. But the protagonists' resilience and defiant bravery shout down that darkness, and their adventures stand in rebuke of structural forces aligned against them, whether manmade or supernatural.

All of this lends a giddy satisfaction to the experience of this voyage with Tic, Leti and the rest, and at reveling in watching men and women that a disgraceful elder deity of pulp literature considered his lessers overcome his monstrosities to become the champions of their own story. We can't call them fearless, because no sane marginalized person in this society is fully that. Instead they're something more compelling: they're imaginative and resourceful in facing the world as it is, with all of its claws and teeth exposed, and barreling down its backroads nevertheless.