Allies have had their “great white awakening.” But who will guide them?

"It's the collective grief of seeing George Floyd cry for his mother." 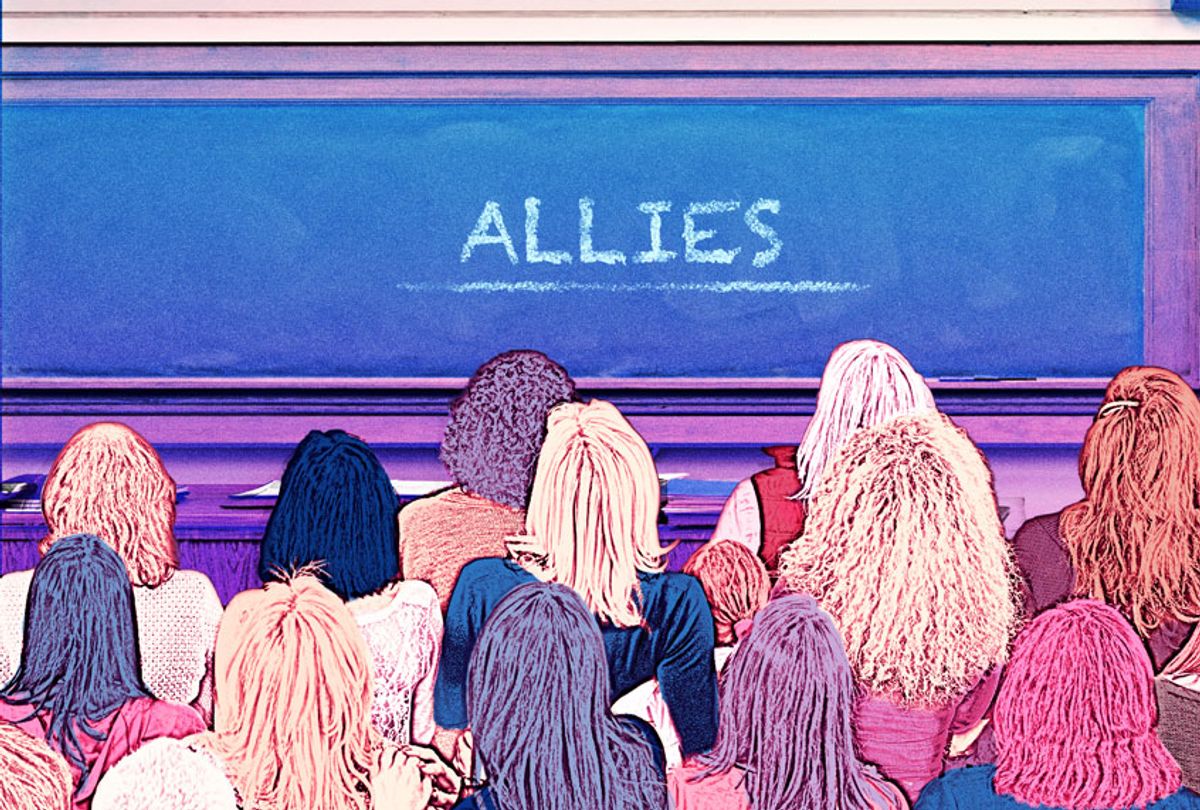 On May 25 the world reeled at the sight of an 8 minute and 46 second video depicting the killing of George Floyd, a Black man, at the hands of four Minneapolis police officers.

Floyd's death seemed to activate something in the white American consciousness that past racist police killings did not. "White people, other non-Black people, directly saw and witnessed this traumatic event," said Norissa Williams, a professor of applied psychology at NYU whose areas of focus range from minoritized communities to cross-cultural relations, told Salon. Non-Black people are having an affective (emotional) response after seeing the video, forced inside during quarantine, she explained, as opposed to a mere cognitive (intellectual) one.

Myisha Hill, founder of the online and Instagram platform Check Your Privilege calls this jolt the "great white awakening." And it's one that seems to have especially resonated with white women. "It's the collective grief of seeing George Floyd cry for his mother," said Hill. "I think it kind of woke up that divine feminine."

A lot of women are doing "the work" on Instagram

Following this "awakening," a cursory glance on Instagram shows an onslaught of anti-racist resources and links to donate to local bail funds. There's also a slew of platforms for talking about and unlearning centuries' worth of systemic racism — these platforms offer live discussions about anti-Blackness, book recommendations, privilege workbooks, and even master classes like Hill's Co-Conspirators Lounge.

These groups are overwhelming followed by white women intent on doing "the work."

On May 31, Eryn Danielle, 23, was disheartened watching CNN with her family in Baltimore. A series of white talking heads described the Black Lives Matter protests as "riots" — protests that have gone on for over 30 straight days in the wake of Floyd's death.

At 10 p.m. that night, she went on Instagram and made an account: Allies Doing Work. In only 48 hours the account had garnered over 800 followers — most of them white or white-passing women, and Danielle posted a video to address this new audience.

"This is not just going to be a space for white allies to learn more," she reminded followers. "We're going to be discussing anti-Blackness as it pertains to every single possible group of people." Anti-Blackness, Danielle explained, is a global pandemic.

She also offered suggestions on how to make the most of donations, about amplifying Black voices instead of remaining silent, and encouraged individuals to actively discuss and try to dismantle racism within one's own relationships.

Allies Doing Work now has over 18,000 followers — 92% of them women. Hill's Check Your Privilege — which she's been running since 2018 — has gained over 300,000 followers since the start of June. Of all her followers,  92% are women and the majority of them are white. (One testimony from a white woman on Hill's website said that Hill always "cuts through my bullshit!").

From Privilege to Progress — a platform founded by a Black and white women following the unprovoked arrest of two Black men in a Philadelphia Starbucks in 2018 — has gained over 200,000 followers since June 1 with women making up 91%. And while co-founder Melissa DePino told Salon in an email that their followers are multi-racial, she said From Privilege to Progress focuses on white audiences, mainly white women. I Will Not Be Quiet is a women's activist group hosting monthly talking circles, with 88% female followers on Instagram.

Why do these groups seem to attract primarily women?

Professor Williams said that, historically, women have been the backbone and the initiators of the Black Lives Matter movement. The three founders of the official BLM movement are women. More broadly, the co-founder of I Will Not Be Quiet, Adrianne Wright, said that this work is traditionally a woman's project. "I think women are more willing to connect with others and connect with their community and share stories and be vulnerable."

But who should guide the work?

All of these groups, apart from I Will Not Be Quiet, are led by Black women. This reveals a kind of trend. Within the ally and Black educator community there is a debate about who can or should be expected to lead the reinvigorated conversation around anti-racism.

Williams said that Black people shouldn't be taxed with educating white people about racism. She argues that it's like a reinforcement of the "mammy" trope — that of the subservient, dedicated Black nanny who devotedly cares for and educates her white charges (think "Gone With the Wind").

Others, like Hill, say that Black educators need to lead the movement. Hill cautions her majority-white women followers to question white educators tackling anti-racism —  to ask them why they feel they have the ability to guide the conversation.

Danielle said it's about intersectionality; she doesn't want to be a Black woman teaching solely white women how to be better allies, she wants to help people from every community be stronger allies.

In her June 2 video she encouraged people following her account to follow Black Lives Matter and other long-standing Black educators, too. A lot of her work — through Instagram Live conversations — is focused on addressing anti-Blackness across different racial communities.

The problem with centering whiteness

The Instagram and online-based group The [White] Shift, which disbanded on June 29 due to complaints of sharing work stolen from Black women, centered white voices. Basically, the group had white women as the focal point. The now-deactivated Instagram page claimed to be "calling white women into the critical + urgent work of uprooting + unlearning racism."

In their first podcast released on June 11 titled "Black Spring" host Sally Rumble said, "As a white woman I am complicit in the mistreatment and oppression of Black people in America," adding that it's only through discussion and focused learning that white women can come together to undo that.

Before the website was taken down, the group had linked to Hill's Check Your Privilege on their website. But Hill said she has no knowledge or affiliation with the group. The [White] Shift organizers did not respond to two requests for comment.

The [White] Shift demonstrates a tendency on the part of white allies — and white people in general – to center themselves.

That is exactly the problem, said Danielle. "You can't learn from people who are in the same boat as you right now," Danielle said. Centering Black voices, she said, those who have been fighting systemic racism and anti-Blackness for decades, is the goal.

Williams agrees. "If you're marginalized, one of the things is that you're rendered voiceless." In order to break this pattern, it's important to make sure Blackness, Black educators, and Black voices are at the heart of the discussion.

Is this work only an individual solution?

Right now, Williams explained, people lack the proper guidance from the government and broader society. "I think it's a scramble while not knowing what else to do," she said. Even if one white person reads a book and feels revolutionized, she said, they — and all of us — are still living in a world that " . . .  institutionalizes, nurtures, privileges, and rewards whiteness."

In the end: "The culture will follow suit when the law is mandating that it has to," said Williams.

Danielle feels similarly. Years ago, she chose to direct her anger away from individuals acting on racist ideas and towards the overarching system that permits those ideas to proliferate.

So white women might be "awake," but now comes the real work. The work of "recommitting yourself to education," as Williams said, and deciding to stop and listen, to question your gut instinct. It's time to listen to Black educators, to center Black stories in entertainment, to "show up" at protests and direct action events, and to implement alternatives to the police force and other institutions that systemically promote racism. Hopefully, this will prompt the culture to follow suit. In the meantime, allies can settle into the resulting discomfort of the "great white awakening."