"Warrior Nun," "Hanna" & "Cursed" join the pantheon of white women who kick butt. But where are heroines of color? 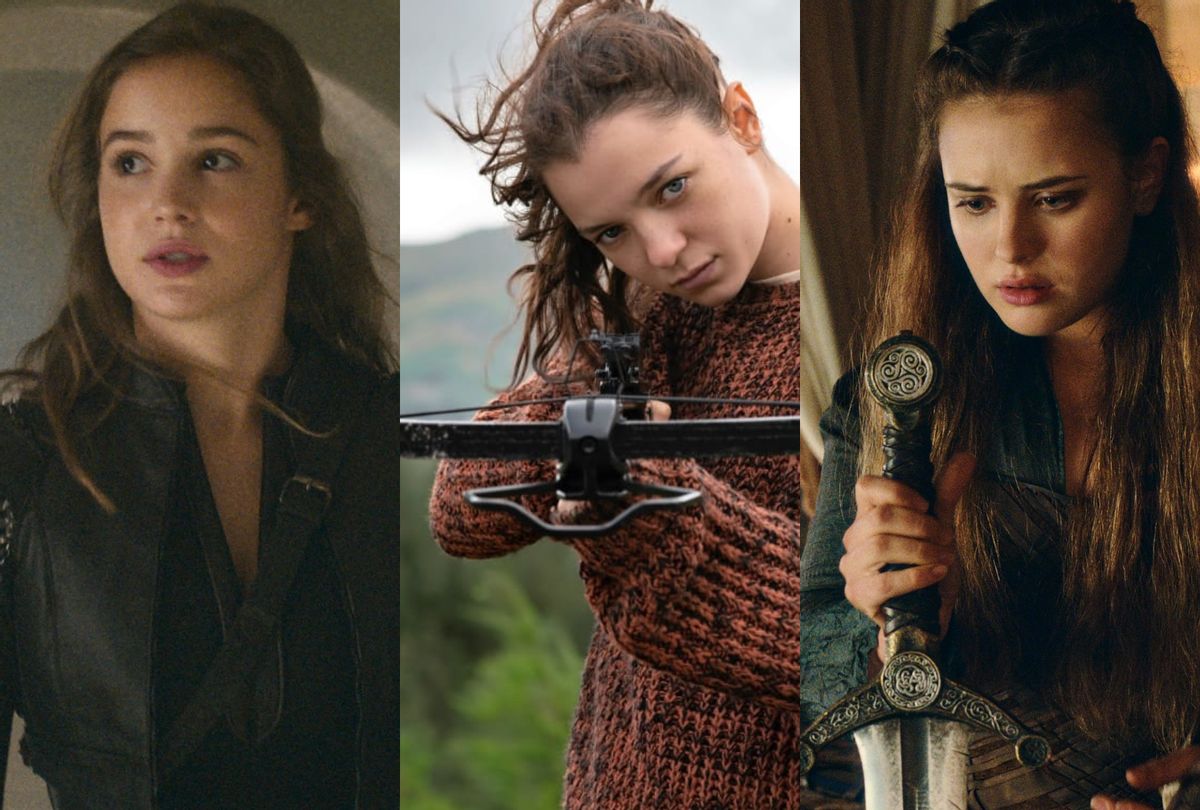 "There is a story lost to the mists of time of The Sword of Power and the young woman who wielded it. They called her a demon, Sorceress, Savior. Before Arthur the King, the Sword of Power chose a Queen." Her name is Nimue, and she is the center of Netflix's upcoming series "Cursed." Nimue is fair of skin and long of hair and played by the rosy cheeked actor from "13 Reasons Why," Katherine Langford.

If this intro has an echo of familiarity, that is because more than 20 years ago we learned that "into every generation a Slayer is born: one girl in all the world, a chosen one." We were told that "she alone will wield the strength and skill to fight the vampires, demons, and the forces of darkness; to stop the spread of their evil and the swell of their number." Here, the "chosen one" is "Buffy the Vampire Slayer," a preternaturally strong, slender blonde forever associated with Sarah Michelle Gellar.

Two years before "Buffy," television audiences were transported to "a time of ancient gods, warlords and kings" when "a land in turmoil cried out for a hero." Her name is "Xena: Warrior Princess," the iconic chakram-throwing heroine played by Lucy Lawless – who, and maybe you're recognizing a pattern here, also is white.

Audiences love women warriors. That's why there are so many films and TV series that revolve around them and their exploits, adventures born of struggle, overcoming and embracing a call to greatness regardless of cost.

Two such stories debut new episodes this week: On Thursday Netflix introduced "Warrior Nun" to its lineup, the story of an orphaned and paralyzed girl named Ava (Alba Baptista) who dies and is resurrected with fully functional limbs and increased strength -- all thanks to an angelic halo embedded in her back.

On Friday a new season of "Hanna" resumes on Amazon, continuing the story of its adolescent assassin (played by Esmé Creed-Miles). Hanna has escaped the government program that trained her and has found others like her, and is being hunted by officials with nefarious plans for her.

Each of these series is based on prior properties, with "Hanna" being a spinoff of an action film and "Warrior Nun" taken from a series of manga novels.

So is "Cursed," which debuts on Netflix July 17, placing Langford in the fray of a fantasy offshoot of the standard Arthurian legend. It's based on a graphic novel, as is Netflix action feature "The Old Guard," which places Charlize Theron at the head of a squad of fighters who are centuries old and cannot die. There's a bevy of fierce heroines to enjoy, and none played by non-white actors.

Over the years audiences have tacitly accepted this notion that queens, knights and warrior princesses are some version of white by default, owing to the genre's roots in European myths, epic poems and fairy tales, as well as the prevalence of the J.R.R. Tolkien and C.S. Lewis world-building structure.

We've only begun to recently question this unspoken rule as films and TV series featuring leads of color or, in the case of "Black Panther," non-white casts featuring mighty women, have proven to be popular and therefore bankable. Nevertheless, this recent flood of releases highlights anew the fact that women of color are rarely allowed to flex the supernatural heroine mantle.

Over on The CW, a remake of "Charmed" renders The Charmed Ones as Latinx women although, in reality, only one member of the core cast is Latina, Melonie Diaz. Her co-stars Madeleine Mantock identifies as Afro-Carribean and Sarah Jeffery is Black.

But when we call to mind the influential super-women made indelible via their time on TV, the names that spring to mind tend to be Buffy, Sydney Bristow of "Alias" fame or going back farther, Lynda Carter's "Wonder Woman" or "The Bionic Woman," starring Lindsay Wagner.

And while the racial identity of these characters does not prevent girls and women from every culture from claiming them as objects of power fantasy, it is one of those baked in entertainment tropes that has aggravating implications. The popularity of "Game of Thrones," for example, ignited a fascination with dragons among teenage girls. But those watching the series received the message that only white people are able ride magical mythical beasts while characters of color served as the support staff.

That blockbuster fantasy is far from the only series that casts women of color not as the chosen one, but as secondary characters, possibly even mentors – another version of the Black best friend, if you will. A few more join the stream this week, in fact.

Both Ava of "Warrior Nun" and Hanna have wing women who aren't white. The second-in-command of The Order of the Cruciform Sword, whose members are described by the "Warrior Nun" title, is Toya Turner's Shotgun Mary. In the second season of "Hanna," the title character is joined in hiding by another former trainee named Clara (Yasmin Monet Prince) who is both her friend and her charge, and a Black girl.

Non-white characters exist in the world of "Cursed," but again, they cater to or back up the specialness of the lead. For instance, Nimue's romantic interest is played by a non-white actor. Each of these characters gets to be in close proximity to great power but doesn't actually wield it in its fullness. (One exception is the casting of Indian-British star Anya Chalotra as the pivotal character Yennefer in the Netflix series "The Witcher" as both the romantic interest and one of that world's most powerful sorceresses.)

Again, this is not a recent trend. "Buffy" gave us two Black slayers, one of whom guest starred for a season after Buffy's temporary death – and died – and the other seen in flashback, the Slayer whose whose leather coat is worn by Spike, the vampire who killed her. The Black slayer Buffy comes to know, Kendra (played by Bianca Lawson) receives paltry character development and basically exists to die and bring forth Faith (Eliza Dushku) who, of course, is the other Slayer everybody remembers.

I'm a huge fan of "Xena," and I also appreciated the fact that it was a Black woman who taught Xena her signature acupressure "touch" that disables her victims. But that character shows up in one episode and, wouldn't you know it, she also dies.

On "Alias," Sydney's best friend Francie, a Black woman, is supplanted by an assassin who looks exactly like Francie. That assassin also gets killed. For a change of pace, "The Witcher" feature a few potent mages played by people of color who are, gasp, actually still alive. One of the most powerful ones also is evil.

If you're a woman of color watching these series, these developments don't send much of a positive message about your life expectancy or moral alignment, even if you do gain some sort of magical power-up or extraordinary ability. Odd, given the superhuman expectations the real world places on actual living and breathing women of color who, according to cultural lore, are society's tanks, strong enough to bear the burden of leading righteous battles and organizing heroic causes.

And it tells us something about how the creators of these characters and titles, who are mostly white and male, view the role of women of color in their fantastic fictional worlds.

It's not as if these creators aren't aware of the fact that warrior women also originate in non-European cultures.  The origin story of Xena, a co-creation of Robert Tapert and John Schulian, has been likened to that of Boudica, the Celtic queen who battled the Roman Empire in the 1st century A.D. The show liberally plays with history and braids timelines; as such, a number of observers point out that the character bears a close resemblance to Queen Amina of Zaria, a warrior queen who lived in the 16th century and expanded her kingdom across Northern Africa.

The inspiration is right in front of us, as is the audience's hunger to see a character who doesn't look like all the others. Thus, when Damon Lindelof created "Watchmen" and cast Regina King as Sister Night, the audience reacted with palpable excitement on top of the buzz surrounding the title itself. King's superhero isn't merely strong, righteous and highly skilled, she draws her powers in part from her relationship to history, by way of her family's legacy and that of an alternate version of America.

Lindelof's inspired divergence from Alan Moore's original graphic novel stands on its own because of the complexity with which King's character was developed, and the fact that Sister Night is so very singular – a costumed hero who, out of costume, is a member of a vilified group of people in America.

Sister Night is an intentional creation – as was Buffy Summer and Sydney Bristow, as was Lagertha, the fictional shieldmaiden from the history-inspired drama "Vikings" and Wynonna Earp (of, yes, "Wynonna Earp"), and every other fierce female fighter to gain a fandom.

Gazing down the road a bit, we may see more heroes that look like King's Sister. The Buffyverse is set to return at some point in the future and will follow a Black Slayer, in a series currently being developed by "Midnight, Texas" executive producer Monica Owusu-Breen.

Long before those titles premiere – a week from now, actually – comes the refreshingly inclusive "The Old Guard" which, in addition to starring Theron, is directed by Gina Prince-Bythewood (of "Love & Basketball"). The plot hinges on discovery of a newly awakened player, a Black woman named Nile (KiKi Layne). Another key character is Asian, and included in its core band of mercenaries is a gay couple.

Disney, America's primary generator of Eurocentric princesses, will soon release a live action version of "Mulan" starring Liu Yifei. Meanwhile both Disneyland and Disney World are doing away with its Splash Mountain ride, which references content from the racist film "Song of the South," and replacing it with a feature based on "The Princess and The Frog," its first title featuring a Black princess.

Maybe we can dare to hope that this is the start of something lasting, in the same way some of us may venture to be cautiously optimistic about the dawning of a more thoughtful era of inclusion in our entertainment portrayals.

Mind you, depictions in the realm of fantasy may not contain the same level of urgency as, say, the need to reconsider the prevalence of series featuring hero cops or the casual racism in comedy. But they do serve the necessary purpose of inviting everyone to escape, to picture themselves as being Chosen Ones for once. That makes the need to broaden our vision of what such a sisterhood looks like absolutely vital. Some might even call it powerful.

"Warrior Nun" is currently streaming on Netflix. "Hanna" returns to Amazon with its second season on July 3. "The Old Guard" premieres on Netflix on July 10, while "Cursed" will hit that platform one week later on July 17.