"The Princess and the Frog" is Disney royalty 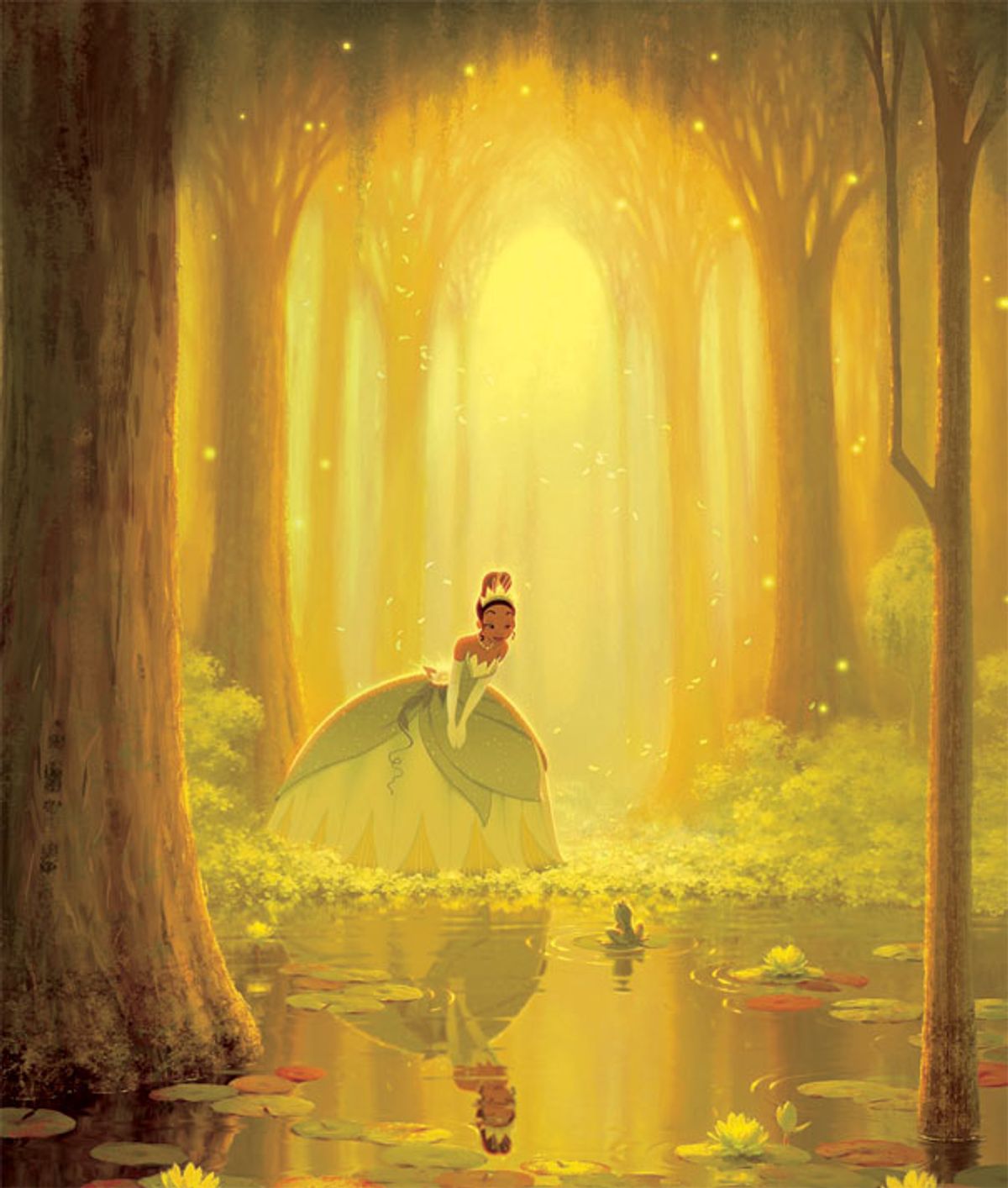 "The Princess and the Frog" starts out with a fairy tale. Two little girls, in full princess regalia, sit together in a pink bedroom straight out of every miniature Disney fan's fantasies, listening to a story of wishing on stars, transformative kisses and happily ever after. But this fairy tale is different. And though our doe-eyed heroine, Tiana, has a penchant for talking to animals and bursting into song, this is not just another Disney princess branding opportunity. "The Princess and the Frog" is also the sweetest, most sincere romantic comedy to come along in ages, and a luminous love letter to a great American city.

In Jazz Age-era New Orleans, young Tiana works double shifts as a waitress to fulfill her dream (and her beloved late father's) of opening up a restaurant. She scrimps, she passes up socializing with her friends, and just when she seems a hairsbreadth away from making it happen, the local realtors tell the African-American beauty that they won't be doing business with "a woman of your background."

Meanwhile, Prince Naveen, a handsome visitor from a fictional country where men speak in ethnically indeterminate accents, has been cut off from his fortune. He's in town to dance, woo the ladies, and find himself a rich bride to assume his debts. But when a visit to the nefarious voodoo "shadow man" Dr. Facilier (Keith David) becomes a teachable moment and transforms him -- and, soon after, Tiana -- into frogs, these two kids from different worlds are going to have to work together to reverse the spell.

Voicing their characters with aplomb and remarkable chemistry for an animated film, "Dreamgirls'" Anika Noni Rose and Brazilian actor Bruno Campos have a light, easy rapport. As they drift through the swamps together, searching for priestess Mama Odie to help them become human again, they bicker and squabble with classic screwball timing. She's the uptight practical one who's hiding her heart; he's the irresistible rake. And you can tell, via the splendidly rich animation and the appeal of the two performers, the exact moment those darn frogs fall hopelessly in love.

Fairy-tale princesses, especially those in the Disney pantheon, have always been a product of their times. Generations ago, it was enough for them to be hardworking and docile, to accept suffering with grace and fall into deep sleeps when the plot required it. It was revolutionary when "Beauty and the Beast's" Belle came along in 1991, with her love of books and her disdain for the handsomest guy in town. Tiana takes the princess role a step further -- she's not just Disney's first African-American to wear the crown, she's the first one with a regular job. (Unless you count Mulan's gig as a warrior.) She also, like "Ratatouille's" Remy, makes the case for great food as a social leveler and the cornerstone of a good life. Tiana knows that food "brings people together" with more reliable results than even voodoo.

But the strides here aren't just for princesses. Those Charming Guys of bygone days have traditionally been even less interesting than the ladies they rescue. Campos makes his Naveen such a cocky player that he doesn't stop seducing even when he's turned green and asks for just one kiss ... "unless you beg for more." He's a spoiled rich guy who needs to grow up, and the movie is just as much about his journey as it is about Tiana's.

And what a felicitous spot to take that journey. The Crescent City, in all her early 20th-century glory, shines like a jewel here: an enchanted, lively, multicultural town full of bright blossoms and infectious songs. As they say in the movie, "Dreams come true in New Orleans." Randy Newman, who wrote the score, does a bang-up job of paying tribute to the city's rich musical heritage in a series of colorful, trippy numbers. There's a jazzy Armstrong-like song (featuring a crocodile named Louis), a gospel-tinged showstopper, a zydeco throwdown, and a boogie-woogie paean to the town sung by Dr. John.

Surely it's no accident, either, that a movie delicately addressing race makes stirring use of light and dark interplay. A G-rated girl film that will move crazy amounts of dolls and lunchboxes may not have an in-your-face political agenda, nor should it. But the glow of streetcars, the light glinting off stars and fireflies in the night sky -- the way that every element, every shade, is more beautiful in context of the other -- that is some powerful, lovely stuff. And you don't have to be 5 years old to be captivated by it.

Disney Movies The Princess And The Frog