Take 2: White allies, here's another list of what to do and what not to do, or wear, or watch

We know you just want to help but seriously: ease back on the white guilt performances and reparations casseroles 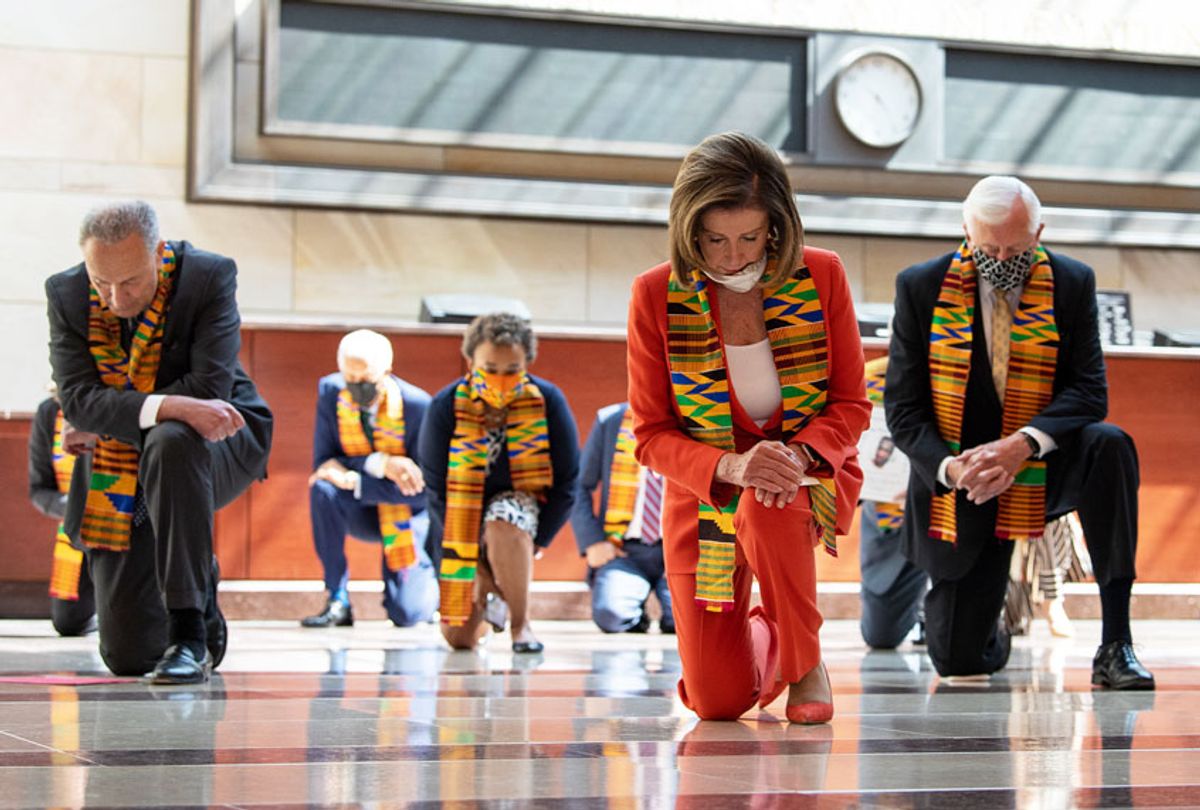 Speaker of the House Nancy Pelosi, D-Calif., and other members of Congress gather at the Emancipation Hall, kneel as they take moment of silence to honor George Floyd, and victims of racial injustice on Monday, June 8, 2020. (Caroline Brehman/CQ-Roll Call, Inc via Getty Image)
--

People. People.  As I said before, I recognize that we, as a nation, are a rolling boil of emotions right now. The good news is that for the first time in a very, very long time we are seeing large numbers of white people joining non-white folks in marching to support civil rights and the Black Lives Matter movement.

Organizations are actively engaging in conversations around race and how they can create a more equitable environment for their employees and patrons of color. Individuals, at least in the short term, are educating themselves about systemic injustice. All of this gives us reason to be hopeful.

It has not gone unnoticed that some of you are getting high on the kind of Grade A, uncut white guilt that makes people nuttier than Almond Roca. Seeing Speaker of the House Nancy Pelosi pose with a kente cloth draped around her neck was . . . something unexpected. So was a photo op featuring white police officers washing the feet of Black pastors in Cary, North Carolina.

I wish I could say there's no roadmap on how to deal with all of this except there are literally reams of them, as thousands of white people are now discovering. But again, since we are a culture with a limited attention span and a shockingly high level of learned helplessness, here's part two in what is threatening to become a series of articles cluing in white people who are new to this whole "ally" business of what to do and what not to do.

Don't randomly send or offer to send your Black acquaintances money. Several days ago a very kind and well-meaning white acquaintance sent me a message with an offer of money. The gesture struck me as sweet, funny, and a tad awkward, so I politely declined, suggesting the person instead donate to a vetted organization working to achieve social equality. That was that. Or so I thought.

Later the same day, another acquaintance from an entirely different social network did the same thing. By then it was already getting weird for me on this front: Since my previous story published, I have gotten several offers of comfort food and casserole deliveries from people I haven't spoken to in years. Another wanted to fund a GrubHub delivery for me. At first I thought it was just me, but nope – the Washington Post wrote a story on this trend.

Apparently for some of you, this is your 2020 version of the Ice Bucket Challenge.

Believe it or not, I understand the impulse. This president is demonstrably unhelpful in crises that disproportionately impact people of color. Social service programs and the Affordable Care Act have been gutted under this administration. As a result, past and present poor-to-non-existent levels of disaster assistance have trained good Samaritans to throw money at national emergencies. And racism is a national emergency. Do not forget that this has been the case for more than two centuries.

Making it rain on that person of color you kinda, sorta know will not extinguish that fire. Although your intent may be pure, you could be adding to that person's psychological harm. For example, many people of color have stories of, say, being mistaken for the help at social functions and establishments to which they've been invited. I say this based upon experience.

In effect what you are doing is tipping your acquaintance for being Black. Don't do that.

Do donate money or time to organizations devoted to assisting marginalized communities. There are many people of color who have been laid off, who are having problems paying their bills and are going hungry. I am fortunate to say that I am not among them. In all likelihood, unless your Black colleague, Facebook friend or guy in your apartment building to whom you want to offer $5 (so he can go to the movies . . . by himself . . .  in 1983) has created a GoFundMe and put out a call for financial assistance, he or she doesn't need your help either.

Instead, as I previously wrote, find a vetted non-profit or agency in your area or in another community in dire need, donate generously and often.

Don't performatively flog yourself. As more white people realize they've been blind to the everyday racism their Black neighbors, friends and family members contend with, among the strongest initial emotional reactions is guilt. This has resulted in some truly goofy social media screeds and the aforementioned wokeness displays which, though well-intended, come across as cringe comedy.

There's a long list of reasons why these gestures create more problems than solutions. One is that they bolster the false notion that in order to arrive at some reconciliation about racism in America, Black people want white people to apologize for their whiteness. Let's be clear: no reasonable person of color would ever ask you to do that.

Such guilt may calcify into to an anger that gets in the way of honest dialogue about institutional racism's impact on our society in large ways and small. If you are not a racist you don't need to announce that to the world, and you certainly don't need to apologize for the skin into which you were born. Instead, the best thing you can do is strive to stamp out racism where you see it. For example…

Do collect your trash. By no means is this a new concept, but it is especially important right now as the weather gets warm and the "All Lives Matter" crowd comes out to play, including people who don't even realize they're members of that club.

It's really important to speak up when you witness a person of color being attacked, undermined or disregarded in interpersonal interactions, at work or on social media. You may not be comfortable going to a protest and putting your body between a Black demonstrator and wall of armored cops, and that's understandable.

But you can at least back up your friend or co-worker when white guy Brad from accounting busts out his bigoted "devil's advocate" insults masquerading as debate points. Every time you do that, you're creating a safer space for the people in your midst.

At the same time, there's a fine line between backing up your friend and leaping in to be the white savior. If you're not sure what to do, start by telling Brad his behavior offends you and asking your friend if he or she is OK.

Don't treat your Black, brown or other non-white acquaintances as your racial therapists. Think of this as subsection A to the previous article's point about not asking your Black friends to educate you. Similarly, we are not here to be your confessor about that one time to didn't say anything when your Black friend was being harassed at a party or belittled at work.

We can't tell you how you should feel about the National Anthem (although some of us can tell you that third verse of "The Star-Spangled Banner" is, indeed, incredibly racist). There are professional therapists trained to assist you with your feelings surrounding these issues. Take your feelings to them.

Don't engage in bypassing, spiritual or otherwise. This is a favorite tool among spiritual progressives and those who would rather deflect the discomfort surrounding racism and injustice instead of doing their part to stamp it out. If a Black person in your midst expresses anger over a harmful act, the worst thing you can possibly do is insist that they calm down or worse, shut down the discussion with some woo-woo pabulum about the oneness of all people. (See: All Lives Matter.)

Recently I witnessed an exchange in which a white person took it upon herself to chide a fed-up Black peer over her justified usage of an expletive to express her frustration at a legitimate wrongdoing. When it was pointed out to the white person that she was in error, she attempted to exit the tense exchange by offering, no joke, "Namaste."

Do get comfortable with being in a state of discomfort. Right now scores of white people are becoming familiar with the meanings of white fragility and privilege, two terms that have a way of putting people off even as they commit to comprehending their meaning.

I can only imagine how alarming it must be for kind and otherwise ethical people to discover that they exist within and, through no direct fault of their own, benefit from a white supremacist social and political framework designed to exploit, exclude and criminalize Black, brown and indigenous people. It's a real mindf**k, isn't it?

But these phrases – "white fragility," "white supremacy" and "white privilege" -- describe a divisive societal power structure. Recognizing one's tacit and inadvertent complicity in this structure doesn't feel great. Instead of taking these wake-up calls personally and reacting negatively, sit with the discomfort. Ask yourself what you can do to help dismantle that structure. Accept that you're going to make mistakes along the way and don't be afraid to stumble. Attack the cancer, not other patients.

Don't watch "The Help" for cues on how to be a better person. As this article is being written, this white savior period piece written by a white woman and centering her experience of witnessing the bigotry faced by Black domestics in her Southern community's white social circle, is the fourth most popular movie on Netflix.

It's true that "The Help" netted Octavia Spencer a Best Supporting Actress Oscar and Viola Davis a nomination. But if Bryce Dallas Howard, one of its white stars, is advising people not to watch it, pay attention.

There are simply too many superb documentary series and films and scripted movies providing more responsible portrayals and information about race relations and bigotry. Film and TV critics around the country have compiled lists to help you out. Here's ours.

And since nothing goes without saying these days, don't you dare watch "The Green Book" either.