It is time to examine the words and the origins of our national anthem, another neo-Confederate symbol

"The Star-Spangled Banner" was lobbied by Southerners into its exalted status. 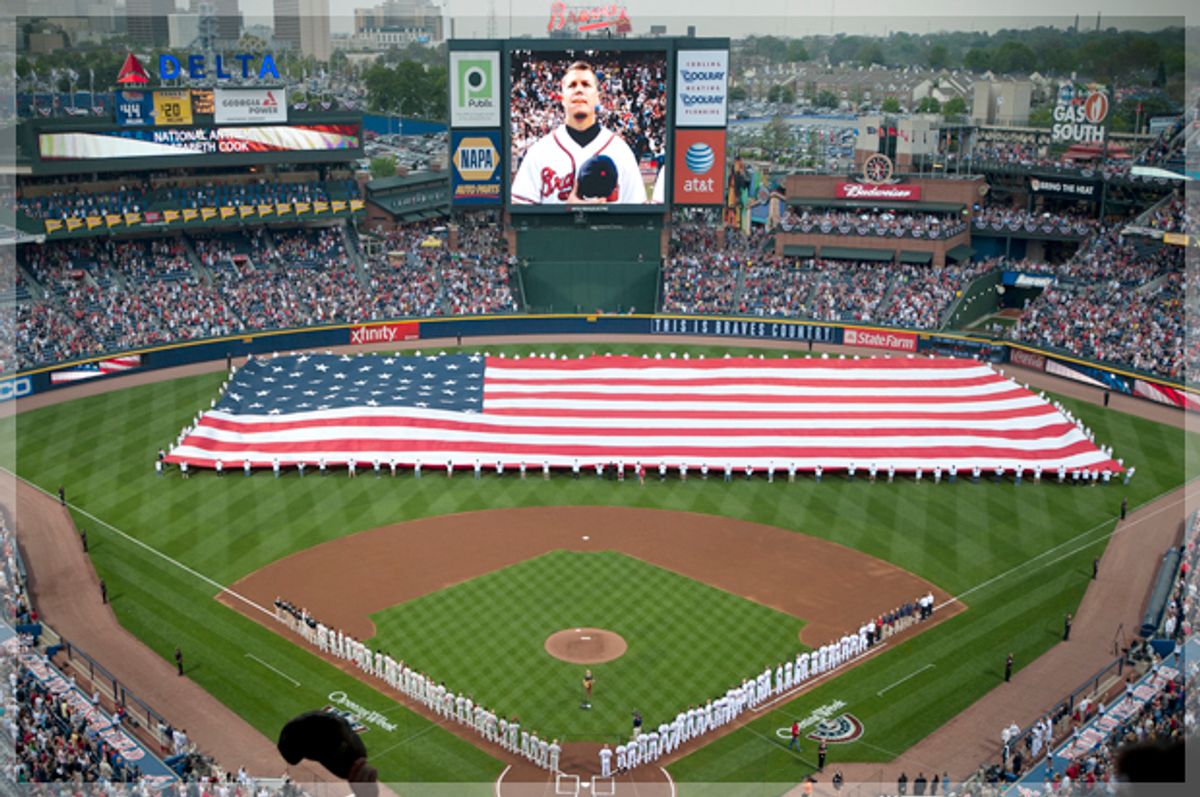 The removal of a statue of Chief Justice Roger Taney from its pride of place in the capital of Maryland is the manifestation of a popular awakening that goes beyond bringing down statues of Confederate heroes like Stonewall Jackson.

What we are seeing is the popular repudiation — and violent defense — of the neo-Confederate ideology that has shaped the symbols of American public life for the last 150 years. Some of these symbols now draw protests, while others are woven into public life.

For example, observing Memorial Day and singing “The Star-Spangled Banner” are uncontroversial patriotic gestures, yet there is no disputing that neo-Confederates developed these rituals. That doesn’t necessarily mean the holiday and the national anthem should be jettisoned, along with Robert. E. Lee statues, only that their historical roots should be recognized and taught.

The dethroning of Taney shows why. Taney, who wrote the Supreme Court's 1857 Dred Scott decision that effectively legalized slavery nationwide, was never a Confederate. He owned people as property, and defended slavery, but he never advocated rebellion. After the Civil War began, Taney continued to serve the U.S. government as chief justice until his death in 1864.

Yet his statue had to go, said Gov. Lawrence Hogan, a Republican. In his statement ordering the removal, Hogan declared:

"While we cannot hide from our past—nor should we—the time has come to make clear the difference between properly acknowledging our past and glorifying the darkest chapters of our history.”

The dark chapter written by Roger Taney began long before the Confederacy existed.

In 1832, President Andrew Jackson — Trump's favorite president — appointed Taney as U.S. attorney general. One of Taney's first actions was to rescind a ruling that free black sailors could not be impressed into slavery when visiting Southern ports. In language strikingly similar to what he would write in the Dred Scott decision, Taney said no black person had rights that whites needed to respect.

Taney helped Andrew Jackson turn the power of the federal government against the anti-slavery movement, with Jackson appointing Francis Scott Key as District Attorney for the city of Washington in 1833 in part to get tough on black and white abolitionists who were becoming active in the capital.

When Jackson appointed Taney to the Supreme Court in the spring of 1836, Key was prosecuting a New York abolitionist for sedition because he kept a trunkful of anti-slavery publications in his Georgetown home.

Taney’s decision in the Dred Scott case, which nullified the laws of northern states protecting the rights of free blacks, made him a hero in the South after the war. The statue that came down last week was erected in 1872.

Likewise, Key’s “Star-Spangled Banner,” with its lyrics deriding black people who took up arms to gain their freedom in the War of 1812, became a point of pride for Southerners.

In the decades following the Civil War, the defeated South strove to establish rituals such as Memorial Day, which honored the veterans of northern and southern armies equally, implying equality of respect for their causes.

Honoring "The Star-Spangled Banner” was another such ritual. In 1914, on the centennial of Key’s writing the song, supporters launched a campaign to designate "The Star-Spangled Banner" as the one and only national anthem. At the time “The Battle Hymn of the Republic” and “America the Beautiful” were also considered national anthems, especially in the northern states.

The campaign to elevate the "Banner" was, as one Boston magazine noted in 1914, “a sectarian movement." That sect was the white supremacist South.

Battle over the banner

Long before Colin Kaepernick had the best-selling jersey in the National Football League, "The Star-Spangled Banner" was the cause of an American culture war.

In the 1920s pacifists, liberals, and African Americans resisted elevating Key's stirring song because they objected to its militaristic and racist overtones. Confederate sympathizers responded by taking their cause to Congress.

In the 1920s, as blacks and white liberals denounced Jim Crow laws and lynchings, the campaign for "The Star-Spangled Banner” became a way to wrap the ideology of the Confederacy in the red, white and blue bunting of American patriotism.

African Americans were especially resistant to the appeal of Oh say can you see.

In 1927, poet James Weldon Johnson and his brother Rosamund composed a song to commemorate the birthday of Abraham Lincoln, called "Lift Every Voice and Sing." The song's popularity among people of color made it known as the "Negro national anthem." Johnson, also an NAACP activist, denied there was anything in his song to conflict with “The Star-Spangled Banner.” But he couldn't resist adding that the "Banner" was "difficult to sing," and that "its sentiments are boastful and bloodthirsty."

The national anthem culture war of the 1920s pitted the emancipationist values of the North against the white supremacist credo of the South.

The Southerners won the war in March 1931. That's when President Herbert Hoover signed a law, sponsored by Maryland Congressman John Linthicum, formally designating "The Star-Spangled Banner" as the national anthem.

Oh Say Can You See

The neo-Confederate spirit animating those who wanted Americans to sing Key's song after every public event was obvious. They marched under the Confederate flag.

On June 14, 1931, the National Society of the Daughters of 1812 and the state of Maryland sponsored a ceremony at War Memorial Plaza in Baltimore to celebrate the new national anthem. The parade was led by a column of Boy Scouts carrying three flags: the Stars and Stripes, the red and gold flag of Maryland, and the Stars and Bars of the army of the Confederate States of America.

Marching in the parade were the very old men who had fought in 1861. The 22-year-old Union men who fought at Gettysburg in 1863 were now 90 years old. These dogged veterans of the Grand Army of the Republic (GAR) were stunned to find themselves falling in behind the banner of their former enemies. They pulled up short.

The story made the news:

"GAR Balks at Southern Flag in Parade," reported the Baltimore Sun. Gen John F. King, past national commander of the GAR, "ordered the Union men to disband and fall out of line," said the Baltimore Afro-America.

Those who wanted "The Star-Spangled Banner" to serve as the national anthem could not have been more explicit in their politics.

Etta Holloway, the leader of the pro-“Banner” forces for more than two decades, defended the flying of the Confederate flag as patriotic and dismissed the walkout of the Union veterans.

"It is shame to spoil such a beautiful occasion with talk of friction," she wrote in a letter to the Sun. "There is no North. There is no South. Nor East nor West. We are a 'sovereign nation of many sovereign states, one and inseparable. A perfect Union.'”

The Confederate flag, she declared, was also a star-spangled banner.

"The Stars and Stripes, our country's flag," she went on, "escorted the Stars and Bars [of the slaveholding states] in the pageant of June 14, proclaiming to all the world our loyalty to it and all it stands for."

In short, neo-Confederates elevated “The Star-Spangled Banner” from patriotic tune to national anthem as a way of honoring southern slaveowners' rebellion.