"The patriarchy will not shift": Cate Blanchett and Uzo Aduba discuss the "Mrs. America" gut punch

Salon talks to Cate Blanchett and Uzo Aduba about dramatically examining American feminism, then and now 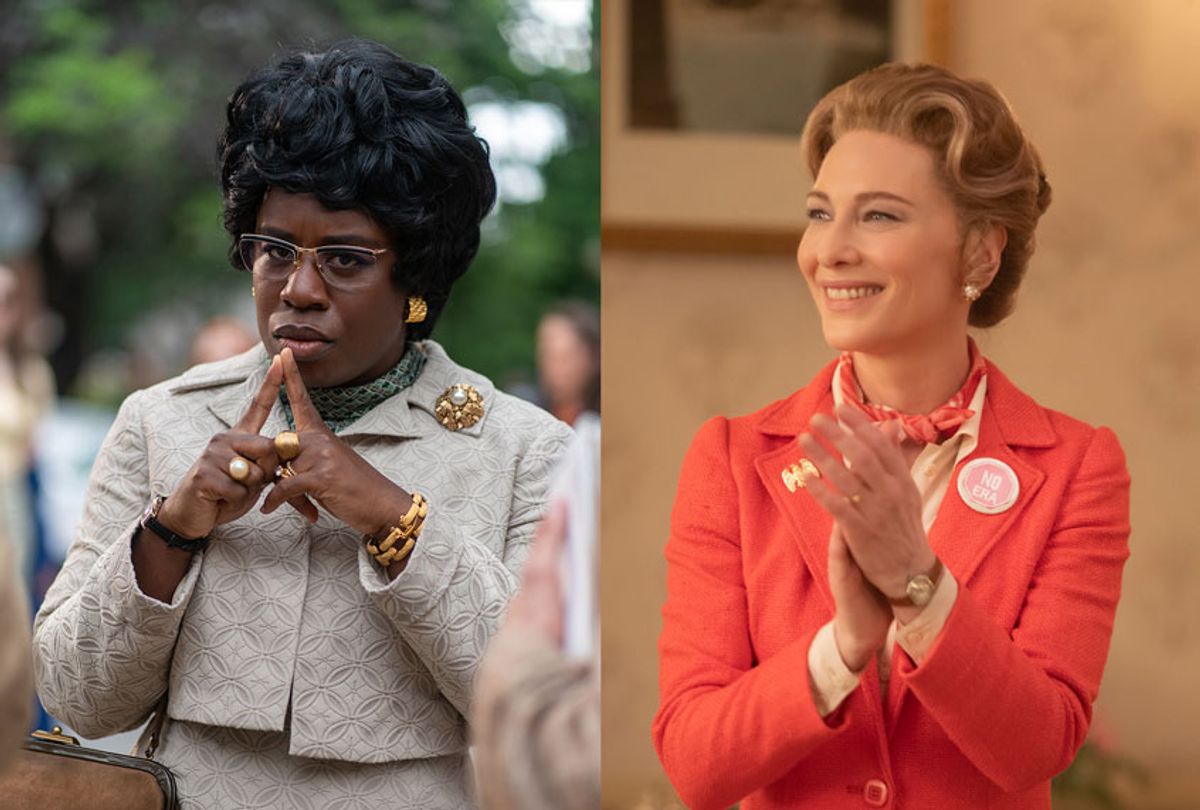 Prior to playing conservative firebrand Phyllis Schlafly, the poster model for FX on Hulu's "Mrs. America," Cate Blanchett admitted that she knew absolutely nothing about her. That's understandable, considering the timeline: during the 1970s and '80s portions of Schlafly's political ascent, Blanchett was living out her childhood and teens in Australia.

Coming in fresh to the nine-episode limited series meant a crash course in who the Eagle Forum founder was, which entailed Blanchett piecing together Schlafly's trolling persona through writing, her recorded speeches and appearances, and through what was written about her, whether celebratory or passionately critical.

Blanchett, who also serves as an executive producer on the series, expected these critiques. "Somewhere in the trench between those two polarized views exists the person," Blanchett told Salon in an interview conducted prior to the limited series' debut. "And so it's a matter of allowing all of those contradictions to live and breathe."

Contrast this with a search for information about the series' portrayal of New York congresswoman Shirley Chisholm. Most of the results are explainers as to who Chisholm is and why she is important – and this is what drives the fire in Uzo Aduba's portrayal.

"Shirley Chisholm is the first woman, a black person – the first black person to run for president. People don't know who she is," Aduba observed in an interview conducted at the same event. "Why is that? How is it that we were able to exclude her from the narrative? That in itself makes the argument for how intersectional people are left behind, regardless of how impactful they have been."

In the five weeks since its debut, "Mrs. America" has stoked discussions on multiple fronts about a woman's role in the home, in politics, and in the world in general.

Much of the conversation roots into the accuracy with which the series portrays the women seen as the rock stars of the feminist movement – Gloria Steinem, Betty Friedan and the featured figure of its latest episode, Bella Abzug (Margo Martindale) – compared with Schlafly and her allies.

But while a share of the analysis also concerns itself with the accuracy of the series and particularly how these women are characterized, anyone supplementing their viewing with a bit of research may notice that these debates largely surround the white characters.

This very fact bares the means by which "Mrs. America" shows the compromises the dominant branch feminist movement (read: white, heterosexual women) consistently makes at the expense of marginalized groups. It transforms what might otherwise be a straightforward fictionalized history into something beyond a heroes and villains binary, even though it's obvious that the writers' sympathies are firmly in the feminist movement's camp.

It renders the plot trajectory of American feminism as a tortured work in progress, a story of premature celebration with a blindness to those left behind, a marathon of progress and setback slowed by women contriving to trip over one another whenever we're not tripping over our own shoelaces.

All the while, series creator Dahvi Waller and the "Mrs. America" writers explore the ways great and small by which women settle for whatever scraps the larger patriarchal system sees fit to give them, assuring themselves that it's the first step to getting more later, as opposed to demanding equal portions in the world place, at home, in the justice system and in government.

"Really what was messy was this notion of we should all make sure we align ourselves with traditional power structures of the frontrunner if we want to get our issues across," Waller said. "Everyone had agendas that they were trying to push forward and then they all got hung out to dry.

"What really struck all of us," she continued, "is that we're having the same conversations today."

On the national political front, yes. Waller and the series' writers highlight these failings concisely in the third episode of the series by focusing on the weeks leading up to the 1972 Democratic convention, where the white feminist plank of the movement that supported Chisholm abandons her at the convention after frontrunner George McGovern lures its constituents away with promises to support the E.R.A. and women's reproductive rights.

Aduba described these elements of "Mrs. America" as "a conversation of intersectionality, supremely."

A fair appraisal of the series is obligated to point out that for all of its efforts to emphasize white feminism's consistent failing of marginalized people, Chisholm and even Flo Kennedy, played with spirit and brilliance by Niecy Nash, appear in the series but are not full participants save for that third episode, "Shirley." This is especially odd for Nash's Kennedy to be backgrounded given that she co-founded the National Women's Political Caucus and was a close ally of Steinem, portrayed by Rose Byrne.

But that tension between the urgency to gain a seat at the same table with the power players on the national political stage and the yearning to make sure every voice gets a hearing receives significant emphasis in the series, personified by Martindale's Abzug and slightly differently by Blanchett's Schlafly.

Blanchett's performance has been hailed as a tour de force by some while the late Schlafly's supporters, including her daughter Anne Schlafly Cori, have voiced their displeasure.

Hollywood has produced a fictional show, FX's "Mrs. America," that purports to show that my mother, Phyllis Schlafly, was motivated by a hunger for power. I know what really motivated Phyllis Schlafly: her family. What did she say was her greatest achievement? Her six children.

Hollywood on the other hand portrays Phyllis not as a homemaker, but as a "professional lobbyist." In truth, home was her launching pad. All of us should consider the possibilities that can launch from the family dinner table.

"Something that Phyllis I think really astutely identified was that the patriarchy will not shift. This is the framework in which we're operating," Blanchett said.

She added, "The mistakes and the compromises that were made within the feminist movement are because there is an innate understanding that as a woman, whether you're a woman in politics, a woman in business, whatever field you're in, you have a window to get things done that's always closing in on us. That's the tragedy of it."

The Abzug seen in "Mrs. America" views politics similarly to Schlafly, truth be told. The difference is in what each woman is willing to compromise in order to make sure her agenda gets a toehold. Schlafly, as she's portrayed in in the series, wants a place in the national conversation. She makes frequent trips to Washington D.C. to meet with Republican senators and congressmen – all men, and all of whom know her from her failed run for national office. Her depicted aim is to use the purported fears of homemakers who don't want to work, serve in the military or compete with men in the workplace to marshal a broad base of conservative women and create a powerful voting bloc. Her success resonates throughout modern politics, evidenced in the potency of the anti-choice movement and the influence of far-right religious groups in national politics.

Because of this, a share of viewers have taken issue with the way Blanchett humanizes Schlafly – a woman who turned a blind eye to the overt racism and homophobia that drove a significant portion of her base, which included the support of the Ku Klux Klan. In the series Blanchett renders a version of Schlafly behind closed doors that shows her as a woman of high intelligence and thwarted ambition.

She's is happy to be invited into the inner sanctum of the good ol' boys club and sits silently while they laugh at efforts spearheaded by Chisholm to shed light on the rampant sexual harassment sustained by office assistants working on Capitol Hill.

When one mentions a punchline about silencing an uppity secretary by "sticking it in her mouth" in reference to his secretary, she simply presses her lips together before, at another man's direction, taking a sip of the scotch they've poured her even though she's a white wine drinker.

Meanwhile throughout the series Abzug, a former U.S. Representative who makes an unsuccessful run for Senate, is the voice of defeatist pragmatism to Steinem's gung-ho optimism.

It is she that persuades Steinem and her allies to swing to McGovern's camp at the expense of Chisholm's shot at the Democratic convention. She's also the woman behind whom the movement rallies prior to the first National Women's Conference in Houston in 1977, presumably making her Schlafly's primary target. (Whether Schlafly confronts Abzug on her home turf when Abzug makes a stop in Illinois is the main event in the latest episode.)

In taking this imperfect view of the feminists/anti-feminist split, "Mrs. America" tells the story not just of who we are, but how we got to where we are, and how multiple signs point to being on our way to worsening the mistakes made by passing on windows of opportunity that opened the past ... however slenderly.

"Sometimes our best gut punches and reminders of history come when we see it right in our face while we're writing it," Aduba said. "That's not to persuade people towards choosing differently. But it's exciting to see when you are watching some of the errors of the past while we're in the midst of voting on those things again, or we find ourselves confronted by those things again – just to be sure that we're actually doing the right thing, not the safe thing."

In a recent article Byrne had described Schlafly as a "first-rate feminist" facetiously and sustained flack for that comment taken out of context on social media. The script itself makes the same observation in this current episode, only by way of Martindale's Abzug. As Abzug points out, she's career driven, ambitious, pursues high education and has managerial skills she's passed on to the lobbyists in her inner circle.

Blanchett inferred this in her own way during our conversation. The reason to present Schlafly as something more complex than a typical villain, she explained, "is to be provocative and to say to people, what do you think? How do you feel about the fact that she brought all churches together and really delivered [Ronald] Reagan to the White House, and put the pro-life plank into the Republican party? She's gotten no credit for it."

"A woman did it," Blanchett said. "We often ascribe those things to men."