Viola Davis transforms to assume her role, but so does Chadwick Boseman. Together they create something magnificent 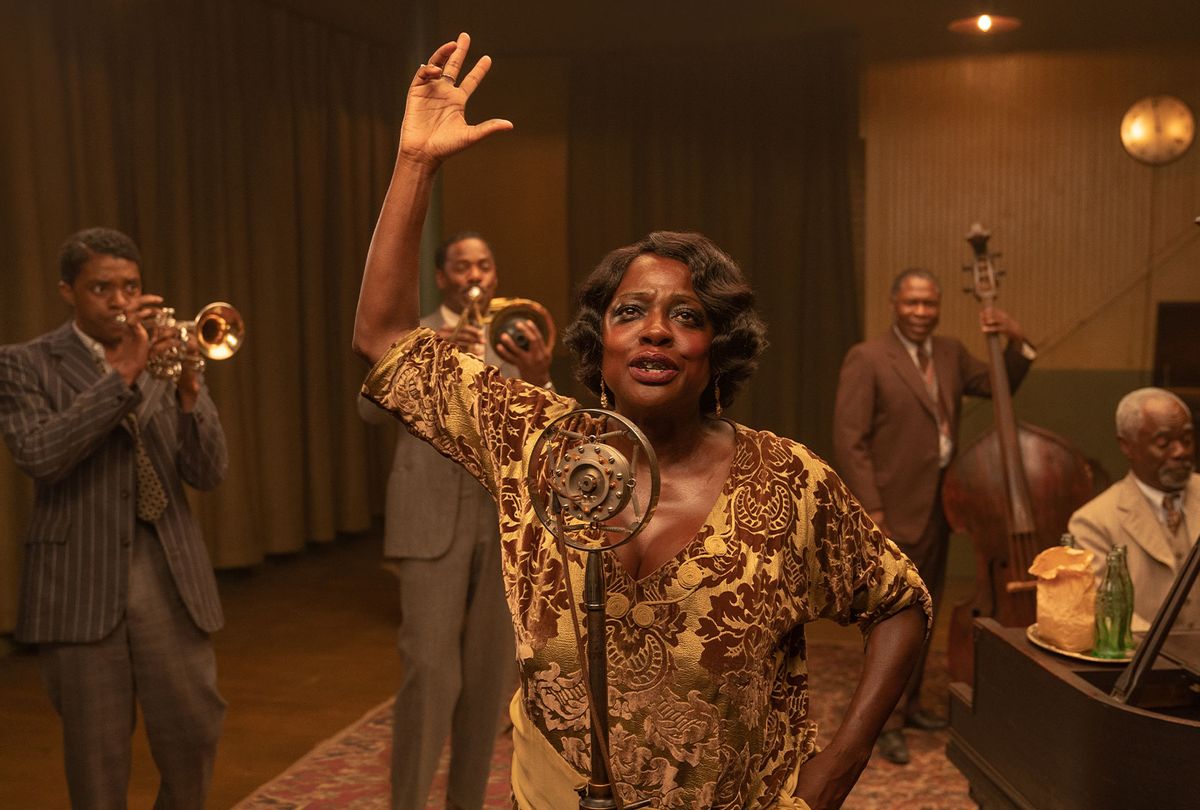 How strange and wonderful it is to notice that even though Viola Davis' true face is hidden under a layered cake of makeup and gleam in Netflix's "Ma Rainey's Black Bottom," her co-star Chadwick Boseman is equally unrecognizable at first. In the late actor's final performance for the screen – he succumbed to cancer last summer at the age of 43 – everything we have come to associate with him disappears inside Levee, a gifted trumpeter demanding recognition in a world that would have him scrape for leftovers.

Levee is ravenous for fame, but every stage he shares with Ma Rainey is by her grace; every recording session is an extension of her queendom. Levee and the rest of the band are there to back her up, although she might say their job is to stay out of her way. Davis' Ma is a hurricane commanding the center of attention. She takes up space and makes demands, the very definition of what lesser men would call difficult.

She knows how the world works. The bulk of the play's action takes place in a Chicago recording studio where two white men are intent upon pressing a record of her song, and a session that should be captured in a single take drags on for hours.

But this is how Ma takes care of herself and her own.

The black bottom is a dance that white flappers appropriated from Black Southerners in the 1920s. This makes "Ma Rainey's Black Bottom" a double entendre; it's about the dance, but it's also about the singer's flesh and the plans white people have to erase her skin and soul from the subsequent products they'll derive from her toil.

Appropriation is the rule of the music market, as it would be for decades, as it is today. Ma knows that when the recording session is over the white people who run the recording industry will take whatever she gives them, toss her and the band a pittance for their time and make thousands more from ripping off their work.

Her bandmembers Toledo (Glynn Turman), Cutler (Colman Domingo) and Slow Drag (Michael Potts) know that too. They weather Ma's moods with a seen-it-all patience, understanding that when she gets her way everyone gets paid. If she refuses to sing before she has that bottle of cold cola her manager promised to provide as part of the deal, so be it. They will suffer her before they write her off with a $25 goodbye.

In August Wilson's portrait of the blues singer, Ma's stubbornness isn't some easily uprooted weed with roots freely swimming in liquid ego, but a vine that wills its way between bricks, hangs on and proliferates. It is attuned to the promise and toil inherent to the Great Migration, which director George C. Wolfe visually acknowledges through illusory still frames, brought to life by occupants through a smile or small movements.

Under Wolfe's direction Davis seizes that natural force, filling the close space with the character's heat and sweat. Cinematographer Tobias Schliessler's camera accentuates the dankness of these surroundings, lighting even the sunnier rooms to produce an aura of drag. Nevertheless, Wolfe never downgrades Wilson's language to a secondary character, which would be unwise.

He and writer Ruben Santiago-Hudson teamed up before for "Lackawanna Blues," and in the same way that Santiago-Hudson shapes Wilson's script with a light touch, Wolfe maintains the play's integrity while using cinematic technique to heighten the stagecraft Wilson carefully employs in his pieces. Branford Marsalis's stirring score further emphasizes this sense of place.

Wilson's work offers actors a chance to dance with his signature dialect, the foundation of his work. The best interpreters of his work don't "act" through the seemingly easy vernacular written throughout his dialogue but tap into it and let it flow through them, as if comprehending that the man wrote with some combination of ink and soil.

For any actor bringing his work to the screen the challenge is to find a middle way between the force Wilson imbued into his work ensuring its potency radiated all the way to the back row and the intimacy the camera affords. Denzel Washington (one of "Ma Rainey's" producers) achieves this in the cinematic adaptation of "Fences," as does Davis, although by plugging into another type of power.

Ma's makeup is always runny, but it is Davis' magma boil of a performance that ensures the black shadow cloaking her eyelids never had a chance to quietly stay in place. She makes her character a being composed of sensuality, ire and perspiration. Like Ma demanded in her time, Davis claims every scene in which she's centered without dimming her performances of her co-stars. As if that were possible.

Turman is granite solid whenever the camera settles down on him, meeting Davis' might with a forbearance descended from years of living under Jim Crow, giving us a Toledo who is fair-natured but sublimating a keen disappointment about the world. In a metaphor-laden speech explaining the lot of Black people in America he vacillates from wonder to sorrow in the space of a few beats, and his expressiveness stretches the moment into years. This grace is a generous partner to Boseman's sharpness.

What we witness here is Boseman becoming not merely Levee, a man, a trumpeter craving renown and respect, but the very essence of starved volition. As Levee he drinks in the world with his eyes, speaks through a crooked grin stretching his lips across his teeth. In a monologue that should win him an Oscar if Academy voters use their eyes and common sense, his Levee recounts a nightmarish crime that left him scarred, burning up the oxygen it the closed space where he and the rest of the band wait as he does so.

Across the film's 94 minutes Boseman transforms Levee from a man hurtling into the midst of contentious conversation into someone tangling in on himself until inevitably, his parched pridefulness consumes him.

People watching Boseman's Levee may be tempted to view its excellence as something driven by a recognition of his looming mortality, but I don't think that's right. Nobody can truly know if that played a role in its ferocity; more to the point, that qualifies the abilities of a man possessing talent the extent of which we'll never know. That we get a view into what could have been, if we had more years, if he had more time, is enough. What a farewell performance it is, and what a way to seal a legacy, ensuring that both he and Wilson will live vibrantly in culture and memory for years to come.