"Schitt's Creek" was my saving grace in the early shutdown days

When Moira Rose wailed, “Pick up a hammer and nail this coffin shut!” I felt it in my bones 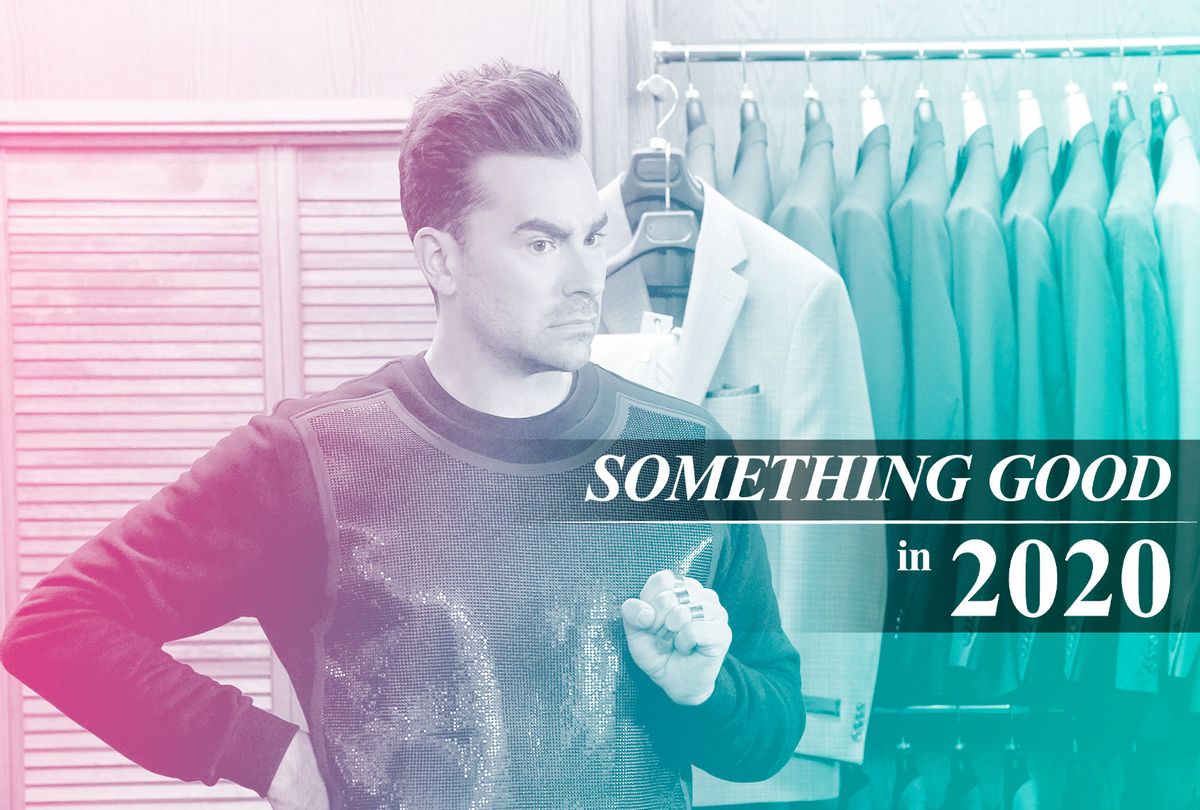 Like many of us, I knew extreme change was coming before it was here. By mid-February, the handwashing memes, the worrisome upward tick of suspected cases, the reports from friends in Italy and in Seattle, foretold what was coming for the rest of the U.S. On March 13, the beginning of my local stay-at-home orders, daily life changed abruptly. One day I had a calendar full of trips and concerts and drinks dates and plays and openings; the next day nothing. The day after that, more of the same. While introverts boasted of their ability to stay home and thrive, I experienced pangs of phantom FOMO, despite knowing full well there was nothing happening to miss.

I trained for zero marathons. I did not whisper to sourdough. And after a morbid first week revisiting the '90s TV miniseries adaptation of Stephen King's "The Stand," I found myself in need of something, anything, to make me laugh after a long day in the office—one room over—helping Salon document the world's collapse.

Dan and Eugene Levy's fish out of water sitcom "Schitt's Creek" had long been on my to-watch list, but before March, something newer and grittier always won out, grim and prestigious with gunshot wounds and a tormented hero and a monster or two of our own making. Until I had nowhere to turn for escapism after a long day managing a news cycle full of death, dread and Donald Trump. That's when a sitcom with a toilet gag name and Chris Elliott in the opening credits sounded, finally, just about right.

Once I started in on the story of a vacuous rich family stripped of their assets save this podunk town with a silly name that they bought as a joke, where they are exiled to learn how to function with no money, status or city amenities, I fell hard. When David Rose (Dan Levy) snapped, "I have asked you thrice now for a towel so I may wash this town off my body," it felt like an acknowledgement of how petty inconveniences were always in danger of being magnified and distorted in our present circumstances, when they become the focal point for a great deal of ambient, unnameable distress.

I believe there is no such thing as too much of a good thing, but my husband refuses to binge-watch. In the before, we both had busy lives, and I could swallow an entire sitcom season while he traveled to another city overnight to see a band I don't know. Now, we have one TV and two people at home all day, every day. ("Give. Me. Some. Space," David hissed through gritted teeth at his sister Alexis, played by Annie Murphy, in the pilot.) My "Schitt's Creek" experience was shaped by the spirit of compromise sharing a small space demands: We could watch an episode every day, instead of spacing them out — but only one.

As March turned to April, my own life increasingly resembled a sitcom with a meager location budget, and I felt even closer to the Roses. The same small cast of characters now rotated through my life every week, too, making the same types of jokes. There were only two businesses I frequented in my new world and I know the owners of both. I thought about adding a new pet to the cast, or buying a house to open new plot possibilities. In my darker moments, I found myself practicing Catherine O'Hara's genius diction in full matriarch Moira Rose character: "Pick up a hammer and nail this coffin shut!"

And yet as the show seasons passed, day by day, I watched the Roses find their way back to the best parts of themselves. If these brittle neurotics could do it, couldn't I, also a brittle neurotic, peel myself off the couch and at least try? If Alexis could go back to school and David could open the boutique of his dreams in right there in Schitt's Creek, I could at least finish my book proposal. If Moira could find her Crowening all the way in Bosnia, I could write a pilot script with a good friend over video chats and Google docs. And if patriarch Johnny (Eugene Levy) could greet each day in a pressed suit and a can-do attitude like the CEO he never gave up on being, I could pull myself together and lead a virtual meeting without falling apart like I desperately wanted to at times.

The Roses gave me, a spoiled whiner with distinct preferences in airport lounges, a daily 24-minute lesson in gratitude and hope that I sorely needed in my more disoriented moments. I am lucky beyond measure to have my health, and shelter, and a partner who loves me, a safe place to live, and fulfilling work, and I know it. There are things from the before I desperately miss, including my family. I hope to see them all at a high-stakes softball game or a small-town movie premiere, as soon as it is safe to travel. For now, I have everything I need to make it through this storyline, and that's enough.

"This town might be your saving grace," the lawyer tells the Roses when he gives them the bad news about where they'd be living in disgrace. How right he was, for them and for me.

"Schitt's Creek" is streaming on Netflix.