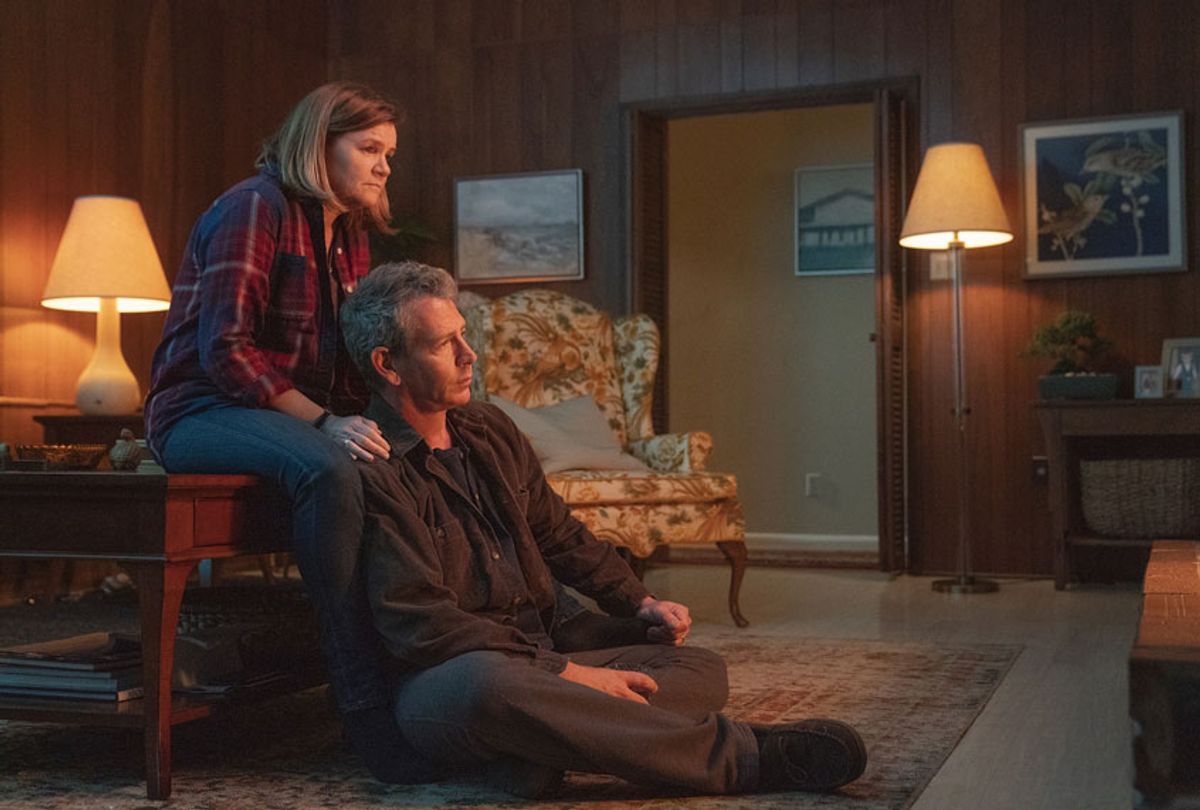 Mare Winningham and Ben Mendelsohn in "The Outsider" (Bob Mahoney/HBO)
--

Richard Price writes the city. People familiar with his work on HBO series such as "The Wire," "The Night Of," and "The Deuce" might first associate him with crime stories; those who read his novels are likely to cite his best known tales such as 1992's "Clockers" (which Spike Lee adapted into a theatrical release) and 2008's "Lush Life."

Really, though, Price made his bones as a writer skilled with placing readers inside very specific New York states of mind, and specifically those frames related to crime. Adapting Stephen King's "The Outsider," then, required Price to stretch beyond his comfort zone in a few respects.

Price's preferred setting is New York, but this adaptation places the action in a Georgia suburb where a local baseball coach and teacher Terry Maitland (Jason Bateman) is accused of a horrific murder involving a young boy whose shredded body is found in the woods. The presumed hero, homicide detective Ralph Anderson (Ben Mendelsohn), a man still dealing with the loss of his own son, arrests and charges Maitland very publicly, which essentially disintegrates the reputation of Maitland's family and traumatizes his wife Glory (Julianne Nicholson).

This is a Stephen King story by way of Price, which automatically takes "The Outsider" beyond Price's comfort zone. Scenes that take place within the justice system are in his wheelhouse, something his readers know. But much of tension driving "The Outsider" springs from a sense of suburban alienation and separateness, a sensibility made most apparent by way of casting Cynthia Erivo as Holly Gibney, a neuroatypical sleuth and a recurring character in Stephen King's universe.

In my original review I wondered whether Erivo's casting as Holly, a character King wrote as a white woman, was an intentional and implicit reference to the series' title. I asked Price about this during a recent interview that took place at the Television Critics Association press tour in Pasadena, Calif., as well as the challenge of adapting a Stephen King story with supernatural elements, to fit the sort of crime narrative with which Price is associated.

One of the things that I think is notable about "The Outsider" is that Cynthia Erivo is playing character that was written as and portrayed in other series as white. In my review I observed that I didn't think that was an accident. Since I have you here, I thought I'd ask you about that. Was Cynthia's casting intentional? Did you write your version of Holly and intentionally make her a black woman?

Jason [Bateman, the series executive producer] and HBO wanted Cynthia early on and they told me that.  Or they might've told me, but I didn't realize it when I was writing. I had her as Caucasian to begin with and I gave her an entirely different background, as coming from a coal mining town. And her family was Lithuanian and there was a scene where she meets her soon to be boyfriend, and she's using Lithuanian expressions and everything.

And I said, well, now I've got a British Nigerian actor. So how do I get her? 'Cause I didn't want to give that up. How do I get her? You know, there were no black people in the anthracite field, working in the coal mine. It was all, like, Eastern Europeans.

So I said, OK, well, her father's a teacher, you know. Other than that, I thought she was great.

You are an author of several novels with a very specific style that comes out in your screenplays and your screenwriting. Were there any differences or challenges with adapting Stephen King's work? He has a very different writing style.

Yeah. I don't think we have that much in common. But you know, no matter what people think of Stephen King, everyone has their secret three or four favorite Stephen King novels, including myself. I was just happy with that great setup he gave me . . . to adapt that book. What you have to do is you got to get rid of all the things that a novel can do that stage can't.

So the challenge was not simply to take out all that authorial presence, you know, but ask how do I get the sensibility of what the character's thinking? How do I turn it into some kind of physical thing without being verbose or giving big speeches to people? It's like an acting exercise, where you're not allowed to say the thing you want. And you can only say these words, but these words have to compel people to understand what you're not saying. That's the challenge of adapting a novel, Stephen King or anybody.

The interesting thing about this one is that it's based such a recent King novel. People know it, but it's not necessarily as familiar to the wider audience as some of his older novels. I wonder if that allows you to kind of relax into what you want to say with this adaptation.

It had nothing to do with the timeliness of it. I mean, you know, people say, what are you metaphorically trying to address here?

That was my next question.

If I start thinking about the big metaphor, then it's like writing with handcuffs on.  It's like telling a joke, punchline first. Someone once said, "I always wait for my reviews to come out to see what I wrote about." You don't think about it at the time.

And then I've been reading the reviews and somebody said, "Well, it's a metaphor for fear of contagion, fear of loners, and this world today," you know, high schools and terrorists and stuff like that. Fear of the other. Yeah, but that's universal. Two hundred years ago, you could have said that. And a hundred years ago.

I saw a lot of grief in it, actually.

Yeah. I wasn't aware of that when I was writing it. So that's one of the things you don't know you're doing, but the story takes you where it takes you.

Can you talk about your decision to take make a change to Ben's character Ralph by instead of having a son away at camp, as he is in the novel, having him contend with his son's recent death?

I just felt Ben's family should go through this massive loss because the story opens up with the loss of a child. And I just felt like if I wanted a bond between Glory Maitland and Jeannie [Anderson, played by Mare Winningham], their relationship had to have something deeper in common. It's like a Venn diagram: Here's the grief of the Maitland family, and here's Ralph's family's grief. It just intersects, you know? And then you've got to worry about whether it's too much like hitting the hammer on the head, you know. I just thought it would make the characters deeper to deal with that loss.

I find it interesting is that since you have such a history with presenting the crime stories on HBO, people have been comparing "The Outsider" to the style of "The Night Of"–

"True Detective," I heard. I don't get that.

I think that may be because "True Detective" has, if not a supernatural element, some sort of inexplicable weirdness woven into the plot.

I have not watched it. I roughly knew it was about two cops being philosophical and moody, you know, and that's it. And that's not my cup of tea.  "The Night Of," I mean . . . you can write something, but you're at the mercy of the interpretation of what you write.

So like in my mind, if I'm writing at a New York City speed and the director is not interested in that, or if you're writing at a solemn speed and the director wants a pep it up, you know, it's a screenplay. It always feels like if you take a bright light, like a klieg light, and the script is like an orange gel, okay, everything's orange. Well here comes the actors and add a green gel. So now, orange under green. Then the director, and that's a red gel. Then the editing room and the cinematography, that's a blue gel.

Now the orange is at the mercy of all these other colors. So you'd like cut to away, and say, "Hey, there's orange under there."

Novelists don't have to answer anybody. And that's one of the joys of being a novelist. You take all the blame and you take all the praise. But now you have 40 cooks in the kitchen, and hopefully you know how to coordinate.

Since you were mentioning your work as a novelist, this is good time to go back to one of the things I read before I reviewed "The Outsider" was an essay I think that you did back in the '90s called "The Fonzie of Literature."

Yeah. I went deep into the stacks. Let's just say that. The reason I bring that up is that one of the things that you wrote, and I think comes out in your writing for TV, is a city specificity. How was that impacted by setting the story in suburban Georgia?

City is always a big character, you know? Um, New York City is my place. I understand the nuances of the city and I would lovingly happily write about them for the rest of my life.

But I don't really know. Okay, the book, it starts out at Oklahoma. It's some generic, a small city in Oklahoma, Tulsa or someplace smaller than Tulsa.

Then all of a sudden I'm in this fictional place called Cherokee City. I don't know these places. So I don't have that same ability to settle in to the nuance and capture the mentality of a small city of 50,000 people. I couldn't use New York City. But you know, if there's a second season, New York City has to be where it takes place.

Yeah. You just have your comfort zone. Just in terms of notes, I can go to town on that place in such a way that I couldn't do in this season, simply because I don't know it.

What do you think that did to your ability to render the sense of place in this story?

It was like something's missing, but you're not quite sure it's missing until you find it. Oh damn. I had to go neutral and think of it as a universal American small city, you know? I couldn't add any loving, site-specific touches.

But next year, it's New York City.

"The Outsider" is currently airing Sundays at 9 p.m. on HBO.