Baking our way through survival

Beyond providing catharsis and sustenance, breadmaking is also an optimistic endeavor 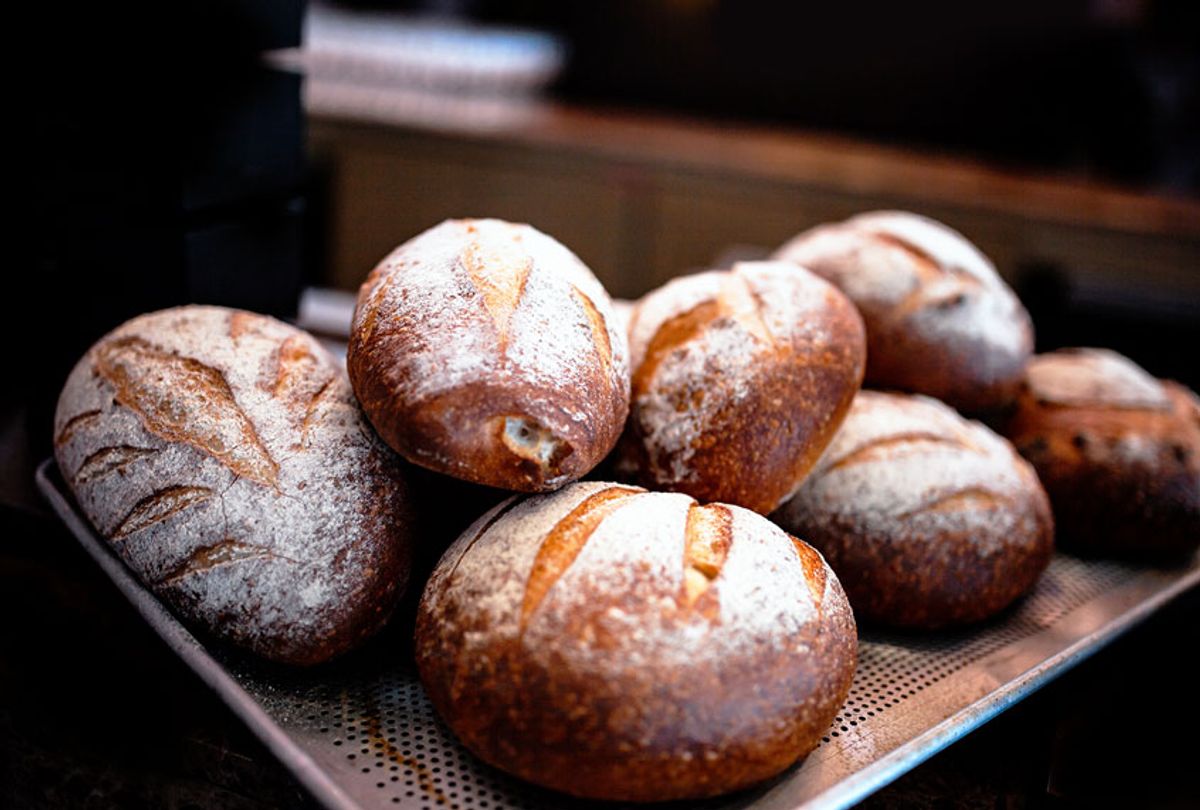 Bread fresh out of the oven (Getty Images)
--

I'm always interested in the mental images that, if you presented them in photographic form to another person, would appear innocuous, but for you, are intrinsically linked to loneliness: a vista from an apartment window that's no longer shared; a view from a pew in a church you abandoned (or that abandoned you); a panoramic shot of a crowd in which you feel completely isolated. For me, one of those pictures is of a single biscuit on a sheet pan.

A few months before my grandfather died, but several months after my grandmother had passed away, I remember visiting him at his small, independent living facility in West Virginia. Evidence of the ways in which my grandmother had tried to combat the generic, almost sterile atmosphere — very white walls, very beige carpet — were still on display: the quilts she had hand-stitched, the pillows she'd crocheted, her placemats shaped like plump, red apples.

At this point, my grandfather had started having some of his meals delivered from the facility's cafeteria. I scanned the menu on his refrigerator and remember thinking that it was a step up from typical hospital food, things like baked spaghetti, turkey with mashed potatoes, baked chicken with rice. But most evenings, regardless of what was on the menu, he would bake himself a single biscuit too.

I can't remember whether they came from a freezer bag or one of those cardboard tubes that you pop open and peel; I just know that he would only ever bake one at a time. We never talked about it. He wouldn't have had much to say, and what is there to say, really? One day you're making dinner for yourself and your wife of nearly 60 years, then suddenly it's just you. You still have to feed yourself, but it's a staggeringly bleak way to have to transition to cooking for one.

Yet he did it.

And for years I've remembered the way that single biscuit looked, fresh from the oven, lightly steaming and golden brown, as a visual metaphor for isolation. But last weekend, as I stood in the grocery store — surrounded by empty aisles, long lines and printed notices that read "Dear customer, please note that toilet paper packs are limited to 2 units per person" — and scanned the shelves for bread flour and packets of yeast, I thought differently of that image. That single biscuit isn't a representation of loneliness, it's a representation of finding moments of consistency and delight when just surviving feels like a challenge.

Challah, lavash, naan, puris, bagels, just plain Wonder Bread, and biscuits. Bread, in all its forms and variations, is a cornerstone in the diets of most cultures. It's holy: a sacramental representation or manifestation of the body of Christ; a commemoration of the flight of the Jews from slavery in Egypt. It's political: in 13th century England, the Assize of Bread and Ale was enacted, which meant that for the first time, the price, weight ,and quality of bread and beer that was sold in villages was regulated. This law paved the way for modern food safety and consumer protections.

And often, eating bread is associated with being social. The word "companion," for example, comes from the Latin words "con" and "panis" — "with bread," or someone with whom you share bread. "Breaking bread" is now a shorthand for communal eating. Research suggests that social eating may have evolved as a mechanism for facilitating social bonding; and considering that archeologists have discovered evidence of flatbread-making at a 14,000-year-old Black Desert dig site, it's likely bread was a consistent part of that evolution.

But strip away the cultural and societal significance of bread, and you're still left with a hallmark of nourishment. Isabella Beeton perhaps put it best in her 1861 book "Mrs. Beeton's Book of Household Management."

Bread has become an article of food of the first necessity; and properly so, for it constitutes of itself a complete life-sustainer, the gluten, starch, and sugar, which it contains, represents azotised and hydro-carbonated nutrients, and combining the sustaining powers of the animal and vegetable kingdoms in one product.

And for millenia, breadmaking was a routine part of domestic life. In 1890, about 90% of the bread baked in America was baked at home, but by 1930, factories usurped the home baker as consumers responded to soft, uniform, pre-sliced loaves made in sterile facilities. Wonder Bread soon became a symbol of technological advancement and modernity. In comparison, homemade bread — with its dips, craters and irregularities — seemed conspicuously anachronistic.

Since then, bread has had its ups and downs in American society. In the 1960s, hippies baked brown bread in coffee cans to serve alongside free stew in Golden Gate Park. In the early 2000s, the Atkins Diet, the low-carbohydrate fad diet, really took off, leaving many to eschew crusty loaves, at least temporarily. The artisan foods movement of the 2010s inspired a generation of home bakers to try their hand at sourdough. Last year, The Grain Foods Foundation launched the #EatBreadAgain campaign.

And now, in 2020 — as COVID-19 anxieties surge and millions of Americans find themselves isolating at home — homemade bread has again become a staple, albeit in our quarantined kitchens.

I'm not much of a bread baker.

I'm not much of a baker at all, actually. I adore the versatility of pastas and stews where you start with a general idea and then strike out from there. There are truisms, of course — onion and garlic are always better when browned in olive oil or butter, meat needs to be salted and peppered, pasta water was meant to be reserved — but there's an innate flexibility to these dishes that allows the maker to experiment with heat and spice and cooking time without f**king up the whole thing too horribly.

Most breads don't allow for such a laissez-faire attitude. Have you ever listened to the call-in portion of "The Splendid Table" or "Milk Street Radio"? It feels like at least once every two weeks someone calls in with a question about why their loaves aren't turning out. Is the yeast fresh? Is the dough rising enough? Are you punching it down too hard? Have you over-kneaded it?

I've made challah that emerges from the oven light and golden. I savor it for days, vowing to make its preparation part of my weekly routine. I try again the next week, only for the resulting loaf to somehow be simultaneously stodgy and crumby. I should have the patience to troubleshoot, but I don't; it's a character flaw that helps keep my favorite local bakery in business.

But I'm not the only one who has turned or returned to bread baking in this time of crisis. Quartz reported that there's currently a nationwide yeast shortage ("It's just that everybody wants to make bread at home, I guess," said Bob Moore, founder of Bob's Red Mill). Flour may be next, and a quick scan of social media shows post after post of bubbling sourdough starters, thin tubes of dough waiting to be braided and knives held, mid-air, in preparation for scoring decorative cuts.

At first glance, it would be easy to dismiss this uptick in bread baking as a symptom of boredom or an extension of prepper-panic, but I think it's more than that. Some of the emotional reasons people bake have been well-documented already: anxiety baking, "procrastibaking," rage baking. This is an extension of those feelings.

Yes, I'm angry and anxious, but even more than that, when I left the grocery store, armed with bags of beans and rice and flour and yeast, I was walking into a world that is inundated right now with news of sickness and death. This virus is far-reaching and there are still so many unknowns; my mother and her mother both are immunocompromised. So many of my friends in the restaurant industry are out of work and don't have access to affordable healthcare. Every morning I wake up and pray that someone I know and love won't get sick — and then I pray that if they do get sick, they won't die.

Much in the way my grandfather's life was personally, but permanently, altered when my grandmother died, so are our lives right now. And in the face of that, we're clinging to things that have always been. Bread has been around since just after the dawn of man. Yeast (almost) always causes dough to rise. An oven-baked biscuit, topped with a creamy-yellow pad of butter, is a consistent delight even in the wake of heartbreak.

I ask a friend who has picked up baking again since working from home about why she's turning to it now. She gives an answer that is consistent with what other people have told me, and with what I feel. What we lack in stability right now, we have in extra time. While we may desire more certainty about the world around us, we can at least be nurtured by the belief that we'll be eating dinner at home tomorrow night.

"So the effort and the time won't go to waste," she says.

Right now, we're baking to remind ourselves that there are things to look forward to — we're baking our way through survival.