We yearned for comfort in 2020. This series offers something more in asking us to believe in being our best 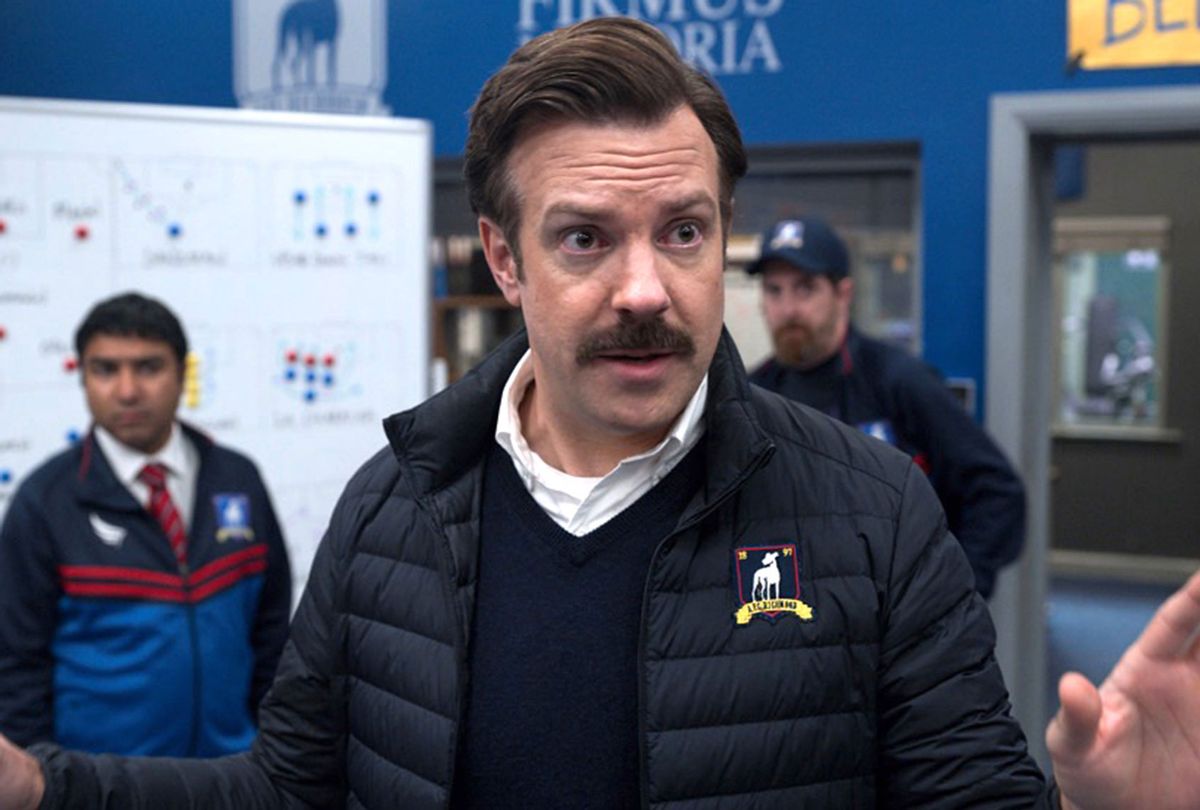 Citing a single favorite scene in "Ted Lasso" may not be impossible, but it is certainly difficult. That's the burden of a comedy devoid of wasted dialogue or pretentious cleverness – and that merely refers to the joke setups and punchlines. Honestly, if memorable scenes were gems, "Ted Lasso" would be an encrusted splendor fit for the Queen.

But there is a monologue nestled within the eighth episode that gets straight to the heart of why this little comedy has sparked something dormant in the hearts of so many. It takes place in a pub where Ted, a character inventively reimagined by Jason Sudeikis, has repaired for a business meeting with his boss Rebecca (West End musical theater favorite Hannah Waddingham).

This being a situational comedy, the pair happen to run into Rebecca's repellent and excessively wealthy ex-husband Rupert (Anthony Head, at his most nefarious) who, in so many words, lets them know that this run-in is not random and proceeds to lord his presence over them. Understand, Rebecca and Ted are known to the tavern regulars but far from popular.

Rebecca hired Ted, an American football coach, to run AFC Richmond, the premier league soccer, er, football team she obtained in her divorce from Rupert . . . and Ted, a man who knows absolutely nothing about the rules of the game, has not endeared himself to its rabid fans. In that moment, Rupert is the big man in the room: buying everyone's drinks, loudly berating Rebecca for failing to pull its team out of the league's bottom ranks, calling Ted a hillbilly.

Ted, in response, smiles broadly and challenges Rupert to a game of darts, with the aim of defending both his honor and Rebecca's. Again, to remind you: "Ted Lasso" is still very much a situational comedy, one constructed by Sudeikis and co-creator Brendan Hunt (who plays Ted's reliable assistant Coach Beard) and executive produced by Bill Lawrence, the man who brought us "Scrubs" and "Cougar Town."

I repeat this to let you know that if you've seen enough sitcoms the outcome of this darts match is in many ways not in question, nor does it matter. The soulful joy of "Ted Lasso" springs from its message's substance.

In this scene Ted lays out the series' entire philosophical bent in a flawless monologue where Ted talks about being underestimated his entire life, and how much that used to bother him, until one day he drove his son to school and saw a Walt Whitman quote on a wall that changed his entire perspective. He recalls that it read, "Be curious, not judgmental."

You can watch this passage in its entirety and it will not spoil the first season for you. Actually, I encourage you to do so. Seeing the action is the only way to appreciate the extensive and meticulous thought that went into constructing this moment.

Whether you choose to watch or not, this moment's construction merits a pause and a closer look. Appreciate the monologue's prose, gorgeous and simple. The lilting score behind Ted's speech breaks through softly casting a gentle aura around Ted in contrast to his rowdy surroundings.

Bringing it home is Sudeikis' manner as he shares Ted's folksy anecdote: it contains not a whit of vanity or gloating at his adversary's downfall. You can pick up shades of pain in the actor's delivery even when triumph is imminent. Take in all of these details and you'll understand why this series feels entirely right, especially right now.

We are in the month of "Best of the Year" lists and late appreciations (like this one) of series that may have escaped review at premiere but deserve to be noticed. "Ted Lasso" debuted in August, and if this were any other year it would not have had much competition. But this was 2020, a year of civil rights uprisings, a mismanaged pandemic and an election in which the stakes were representative democracy itself. Our attention was being pulled in many other directions, few of them for happy reasons.

With all of this in the foreground, the notion of sitting down to a story about a college football coach with an accent stuffed with all the corn in Kansas basically sailing into a high-profile job for which he isn't qualified – in London! – may not have been realistic. In 2013? Sure. That was the year Sudeikis debuted a much broader and shallower version of his Ted Lasso character in a series of NBC sports promotional video spots.

But in 2020, a braying satire of failure would be crass and too close to the reality we're intent on tuning out; besides we wanted the comfort of the familiar. "Comfort" is one of 2020's defining terms, along with "horror," "unprecedented," "anxiety," "insomnia" and a barge's worth of negative words that speak to the tire yard fire nature of the preceding 12 months. Against that expansive vocabulary doomscroll, the concept of comfort acts as a blanket covering everything, concealing life's unpleasantness from sight and offering us a place to hide.

Thus 2020 also became the year to revisit old TV shows and movies, partly due to the industry-wide dearth of new content, and partly because we craved the solace of the known. A secret ingredient of films and series we designate as classics is that we can hear a line or watch a scene countless of times over the years and still feel that flush of joy spread throughout our skin, the same excited tingle race up the back of our necks. The re-watch is a feel-good drug and never stops working. We know what we're getting, and nine times out of 10 it is just the thing for what ails us.

That means there's something to be pondered in the widespread impulse among the "Ted Lasso" faithful to replay the entire season right after they've seen it for the first time. Very few new shows have that kind of appeal, and I suspect that's because there aren't many out there that invite us to feel good about who we are and what we can be.

By all appearances Ted is the textbook example of the ugly American as the British might envision him, right down to his walrus mustache and provincial accent exhumed from the  Dust Bowl era. Rebecca hires him for those reasons and selfishly destructive ones, since AFC Richmond is Rupert's pride and joy, and she believes nothing will make her happier than to ram it into the ground, as if that will somehow hurt her arrogant ex.

This is the rash act of someone who is hurting, and the series makes that plain. The entire team, in fact, is in disarray when Ted finds them, set against each other owing to the showboating arrogance of its star player Jamie Tartt (Phil Dunster) and the seething anger consuming team captain Roy Kent (actor and comedian Brett Goldstein).  Seeing that their fate is now placed in the hands of some bumpkin from the U.S. doesn't give them much hope . . . until Ted gets to work, partly inspired by that Walt Whitman quote.

That's where this series' one-of-a-kind brilliance begins to gel. Setting "Ted Lasso" in the world of premier league football should not be a turn-off to people who don't follow that sport, since it is decidedly not about the ins and outs of the game. (As a huge fan of "Brockmire" I can attest that you don't have to love any pro sport to fall for a comedy about it.) Instead, what it preaches is taking comfort in who we are and how we are, and having faith that we can become better.

Methodically and with a lopsided portion of boundary-busting positivity Ted disarms the walled-up people around him with his guileless optimism, starting by showing the simplest act of kindness toward the team's roundly abused kit man Nathan Shelley (Nick Mohammed), an insecure wallflower whose meek nature obscures hidden talent.

He gets the resident curmudgeon Roy to read "A Wrinkle in Time" and eventually melts the icebergs surrounding Rebecca in part by obliquely inspiring a friendship with Jamie's girlfriend Keeley Jones (Juno Temple), a model whose branding acumen earns her a lasting role with the organization.

And Ted becomes the catalyst for this mass evolution by wielding an optimism that is earnest and mostly real. Part of it is a put-on because frankly, nobody would offer themselves up for such a high probability of public failure on an international stage if they weren't a little crazy, and yes, Ted is contending with heartbreaking challenges of his own.

This sadness informs his gentle mania for coaching with an eye towards helping people to be their best selves, and not necessarily to win. Stating this out loud to the British press, and one notoriously harsh journalist in particular, makes it open season on Ted Lasso in the U.K. Immediately he earns the nickname of "wanker."

Even this does not deter him, because Ted is not dumb. He's acutely aware that his players, their fans and England itself are judging him. The quality that differentiates him from most mere mortals is his near lack of ego and the confidence that if people were curious enough to come to know who he is and what he stands for, they'd like him and maybe even find a way to see the best in themselves.

That outlook produces the type of humor that isn't going for reflexive laughter or stringing one rock solid punchline to the next. It speaks to a desire at the core of us that doesn't merely want to feel better but be better. The so-called Ted Lasso way doesn't always result in a win, and only ever guarantees a paradigm-shifting lesson.

This makes "Ted Lasso" stand apart from every other series, comedy or drama, that we've turned to in this trying year, in that it dares to correct the hollowness of the nationalist "be best" motto. Americans have long connected the concept of "being best" to an outsized sense of primacy, an illusion that steadily deteriorated over the past decade and was entirely obliterated by this administration's pandemic response. But as this series plays out, being the best isn't about dominating others or succeeding at the expense of the people around you.

Ted's paradigm envisions excellence through self-examination and collaboration, believing in one's self while being curious enough to affirm the best of what we see in others. One shouldn't underestimate the power of a message like that, especially in a such a brutal year and at a time when the world sees America as an erratic joke. This series replies with an acknowledgement of the truth in that image and reminds that we're all capable of doing better by doing right by others.

Apple TV+ still is not a widely adopted service even among devoted viewers despite the cavalcade of A-listers it has lured into its tent. Part of the reason for that is none of its series feel essential – even those that are critically acclaimed.  "Ted Lasso" does; my God does it ever.

You'll have to watch it to understand . . . and take comfort in knowing that it only gets better with each new viewing, and that your re-watching it is not a means of retreat. It's an end-of-the-year refueling with a brighter view of how much better we can be.

The 10-episode first season of "Ted Lasso" is currently streaming on Apple TV+.