"Who could get more laughs out of one unzipping?" Baron Cohen asked of Giuliani. "Just incredible" 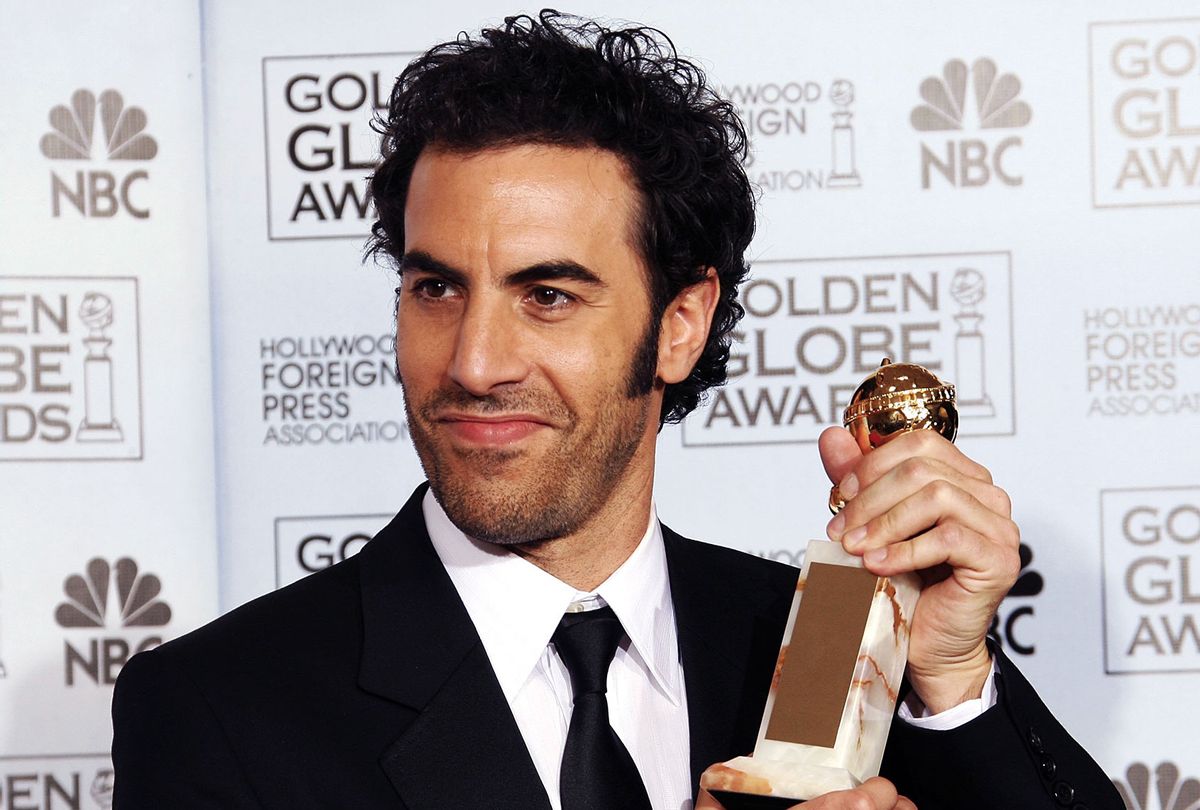 Actor Sacha Baron Cohen poses with his Best Performance by an Actor in a Motion Picture - Musical or Comedy award for "Borat: Cultural Learnings of America for Make Benefit Glorious Nation of Kazakhstan" backstage during the 64th Annual Golden Globe Awards at the Beverly Hilton on January 15, 2007 in Beverly Hills, California. (Kevin Winter/Getty Images)
--

During awards acceptance speeches, it's typical to hear someone thank their partner, their parents and maybe God — but "Borat Subsequent Moviefilm" actor and director Sacha Baron Cohen spent a portion of one of his acceptance speeches at Sunday's Golden Globes spotlighting the "work" of former New York mayor and Trump legal counsel Rudy Giuliani, who Baron Cohen credited as his "co-star" in the award-winning film.

"This movie couldn't have been possible without my co-star, a fresh, new talent, who came from nowhere and turned out to be a comedy genius," Baron Cohen said in his virtual acceptance for the best motion picture in a musical or comedy award. "I'm talking, of course, about Rudy Giuliani."

He continued: "Who could get more laughs out of one unzipping? Just incredible. Our movie was just the beginning for him. Rudy went on to star in a string of comedy films, hits like 'Four Seasons Landscaping,' 'Hair Dye Another Day' and the courtroom drama 'A Very Public Fart.'"

Later that evening, when Baron Cohen won the award for best actor in a musical or comedy for "Borat Subsequent Moviefilm," he made a joke about the former president. "Donald Trump is contesting the result," Cohen said. "He's claiming that a lot of dead people voted, which is a very rude thing to say about the [Hollywood Foreign Press Association]."

Baron Cohen has used awards season to continue to level barbs at both Trump and Giuliani, who was featured in the film's now-infamous "shirt tuck" scene. In it, Tutar (Borat's underage daughter played by Maria Bakalova) scores an interview with Giuliani, held in an upscale hotel room. Ostensibly determined to be a journalist, Tutar asks Giuliani about the Trump administration's COVID-19 response but things devolve as Tutar flirts heavily with Giuliani, touching his knee several times. They then have a drink together and Giuliani blames China for the coronavirus pandemic before he agrees to eat a bat with her. Eventually, Tutar invites Giuliani to the hotel bedroom, where there are a number of hidden cameras. He obliges and asks for her phone number and address while he sits on the bed. Tutar then reaches to remove Giuliani's microphone and touches his pants as he pats her backside. Giuliani then lies back on the bed and puts his hand down his pants.

At that point, Borat bursts into the room declaring, "She's 15! She's too old for you!"

Giuliani immediately sits up and tries to leave as quickly as possible but Borat calls after him: "Rudy, Trump will be disappoint! You are leaving hotel without golden shower!"

As Salon reported in October, Giuliani has maintained that the scene was "doctored" footage. "The Borat video is a complete fabrication. I was tucking in my shirt after taking off the recording equipment," Giuliani wrote in a tweet on Oct. 21. "At no time before, during, or after the interview was I ever inappropriate. If Sacha Baron Cohen implies otherwise he is a stone-cold liar." Salon's Roger Sollenberger reported that Giuliani is classifying the scene as a political "hit job" in retaliation for his smears about Joe Biden's son, Hunter. But Baron Cohen responded by saying, "If he sees that as appropriate, then heaven knows what he's intended to do with other women in hotel rooms with a glass of whiskey in his hand."

When Golden Globe nominations were announced on Feb. 3, Baron Cohen received nods for both his supporting role in "Chicago 7," in which he played activist and comedian Abbie Hoffman and his work on the "Borat" sequel." During his statement following the nomination, he thanked "the all-white Hollywood Foreign Press," the voting body behind the awards, for the "ridiculous amount of nominations."

"I'm so honored—and in the event that we don't win, I promise to hire Rudy Giuliani to contest the results," Baron Cohen said at the time.

According to Baron Cohen, he saw a huge shift in American society from the first time he went to shoot "Borat" 15 years ago to the time he made the sequel over the course of 2020.

"In 2005, you needed a character like Borat who was misogynist, racist, anti-Semitic to get people to reveal their inner prejudices," he told New York Times in October. "Now those inner prejudices are overt. Racists are proud of being racists.'' When the president is "an overt racist, an overt fascist,'' he said, "it allows the rest of society to change their dialogue, too.

In large part, he made the film to show the impact that "Trumpism" was having on democracy.

"Had Trump won on Nov. 3, and I hadn't been able to make this movie, I wouldn't be able to live with myself," Baron Cohen said after last night's awards ceremony, per The Hollywood Reporter.

"The gray suit is locked up and not coming out again," he said.