The actor was nominated for his "Borat 2" & "Chicago 7" roles, both of which use absurdity to challenge corruption 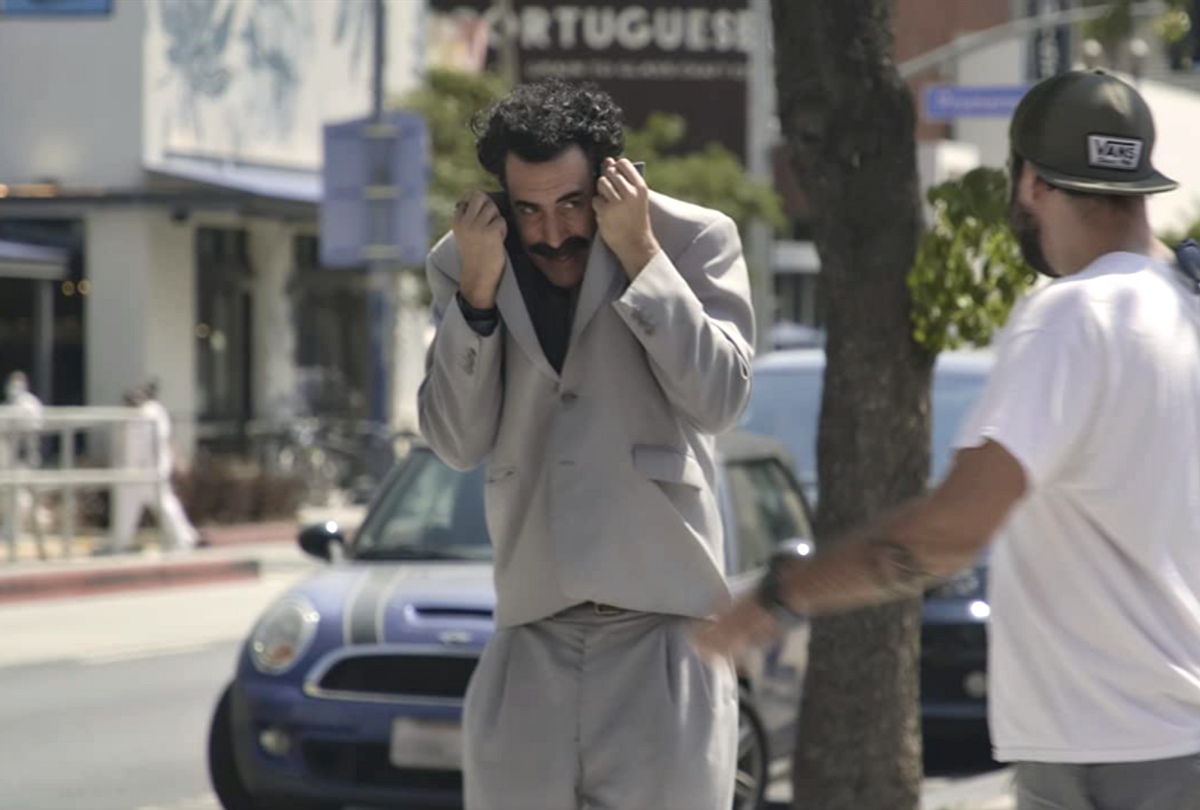 It was a big week for actor Sacha Baron Cohen, who received Golden Globe and SAG Award nods for both his role as Kazakh journalist Borat Sagdiyev in Amazon's "Borat" sequel and his turn as Abbie Hoffman, the activist and comedian whom Cohen played in Netflix's "The Trial of the Chicago 7." Both movies also earned additional nominations in their category and for other cast members, with a total of 11 nods all together.

Naturally, the funnyman used this moment in the sun to troll Rudy Giuliani, America's Mayor and unexpected scene-stealer of "Borat Subsequent Moviefilm."

"I'm so honored — and in the event that we don't win, I promise to hire Rudy Giuliani to contest the results," he said in a statement released in response to the Globe nominations.

Baron Cohen also acknowledged the actual breakout star of the "Borat" sequel (sorry, Rudy), in addition to the man behind "Chicago 7."

"These nominations are a tribute to the talented creative teams that led and supported both films from inception to this moment. I especially want to congratulate the visionary of 'Chicago 7,' Aaron Sorkin, and 'Borat's' Tutar, the incredible Maria Bakalova," he continued. "These two films are different, but they share a common theme — sometimes we have to protest injustice with our own farce."

That last line is revealing in how Baron Cohen's career has culminated in a confluence of cinematic resistance. On a surface level, the roles he played seem extremely different: a prankster who has no qualms about sprinting out of a luxury hotel in hot pink lingerie, and the real-life protester and founder of the Youth International Party. And while the films show Baron Cohen's range as both a comedian and a dramatic actor, they are unified by the use of humor as a way to actively subvert and challenge corruption.

As such, it shouldn't be a surprise that both movies released during 2020 and that Baron Cohen is now receiving his due. During a year marked, amid a global pandemic, by political chicanery and wild conspiracy theories that ultimately resulted in an attempted insurrection on the United States Capitol, he made the case for using or embodying absurdism to attack what's laughably reprehensible about our society.

That concept is partially what inspired the actor to pull his iconic gray suit out of the closet and resurrect the character of Borat in 2020's "Borat Subsequent Moviefilm," in which his caricatured Kazakh reporter travels American with his teenage daughter Tutar (Maria Bakalova) on a bizarre mission. As Baron Cohen told the New York Times in October, he saw a huge change in American society from the first time he went to shoot "Borat" 15 years ago to the time he made the sequel.

"In 2005, you needed a character like Borat who was misogynist, racist, anti-Semitic to get people to reveal their inner prejudices," he said. "Now those inner prejudices are overt. Racists are proud of being racists.'' When the president is "an overt racist, an overt fascist,'' he added, "it allows the rest of society to change their dialogue, too.

"My aim here was not to expose racism and anti-Semitism," he said of the sequel. "The aim is to make people laugh, but we reveal the dangerous slide to authoritarianism."

Over the course of the sequel's 90 minutes, Baron Cohen's Borat sneaks into CPAC dressed as Trump, hunkers down with some QAnon conspiracy theorists and brings us the now-infamous "shirt tuck" incident.

In a scene near the end of the film, Bakalova as Tutar goes undercover as a far-right journalist who scores an interview with Trump adviser Rudy Giuliani, to supposedly discuss the administration's COVID-19 response. However, things devolve as Tutar flirts heavily with Guiliani, touching his knee several times.

Eventually, Tutar invites Giuliani into the hotel bedroom, in which hidden cameras catch Giuliani asking for her number, patting her backside and then lying back on the bed and putting his hand down his pants. Borat bursts into the room at that point to interrupt.

As Salon reported in October, Giuliani has maintained through several interviews that the scene was "doctored" footage.

"The Borat video is a complete fabrication. I was tucking in my shirt after taking off the recording equipment," Giuliani wrote in a tweet on Oct. 21. "At no time before, during, or after the interview was I ever inappropriate. If Sacha Baron Cohen implies otherwise he is a stone-cold liar."

Baron Cohen responded, "If he sees that as appropriate, then heaven knows what he's intended to do with other women in hotel rooms with a glass of whiskey in his hand." As Salon's Roger Sollenberger reported, Giulliani had classified the scene as a political "hit job" "in retaliation for his recent smears on Democratic nominee Joe Biden's son, Hunter."

Although not quite as salacious, Baron Cohen's role in "The Trial of the Chicago 7" fulfilled a similar function thanks to Abbie Hoffman's real-life beliefs and actions. In an interview for the January cover story of "Variety,"  he discussed how he was always drawn to Hoffman because he understood the power of humor to attract supporters to the peace movement.

"He knew that by becoming a standup he would have a greater impact on the crowd, and his aim was to influence people, to get people to take immense risks to fight the war in Vietnam," says Baron Cohen. "He used humor to inspire followers, and he realized that absurdity was a way to undermine institutions that he thought were corrupt."

As Baron Cohen continues to inspire with his outrageous and outspoken ways, one can't help hope that he takes home at least one award for "Borat Subsequent Moviefilm," if only to hear Giuliani's name in the acceptance speech. Now that would be a great justice.