The truth behind how that fateful press conference came to be lies somewhere between a crematorium and sex shop ... 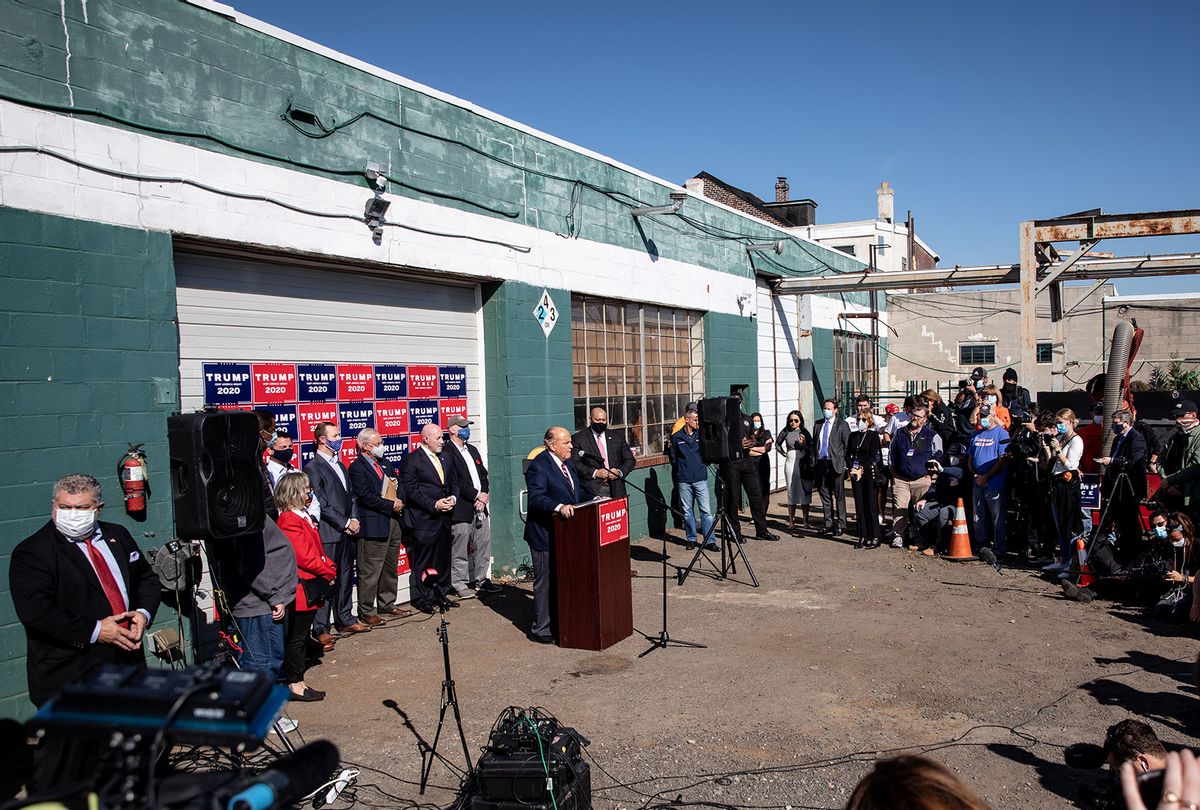 In November, four days after the presidential election, a humble Pennsylvania landscaping business rose to national prominence after serving as the site for a bizarre press conference, led by Rudy Guliani, to make unfounded claims of voter fraud. Now, Four Seasons Total Landscaping — which also was the site of a Super Bowl commercial for the freelance marketplace Fiverr — is getting its own documentary, it was announced Monday.

According to the press release, "Four Seasons Total Documentary" is an apolitical and feel-good "firsthand account of the rollercoaster journey that one well-meaning small business in Philadelphia went through when they agreed to host a political press conference in the midst of the most hard-fought American election in recent history."

The documentary, which doesn't have distrubution yet, comes from director Christopher Stoudt, who is teaming with producers Glen Zipper and Sean Stuart. Chris Paonessa and Kevin Lincoln are also producers.

"It's an honor and privilege to be able to help tell a story that the world has been waiting months to hear," Stoudt said in the statement. "After such a hard year, everyone needed a moment to laugh. Little did we know it would come from a press conference that took place across the street from a crematorium (down the road from a sex shop)."

The Four Seasons debacle all started with a tweet from former president Donald Trump — back before he was banned from Twitter — who wrote: "Lawyers News Conference Four Seasons, Philadelphia. 11:00 a.m."

There were several, immediate questions that sprung from a collective sense of gleeful schadenfreude: Did Trump's team actually originally try to book the Four Seasons Hotel and they were denied? Was this their attempt at a cover-up? If not, why in the world would you choose this business — located between a crematorium and a sex shop — as the site of a legal press conference?

The weirdness didn't stop after the press conference ended. A man featured at the press conference was a convicted sex offender, Politico reported the next day, while The New York Times later found out that the mistake was "not in the booking, but in a garbled game of telephone." Trump's legal team had supposedly told the president they'd booked the landscaping firm, but he heard the name and assumed it was at the upscale hotel.

The debacle earned the landscaping business immediate meme status, as people snagged exterior shots to use as their Zoom and Google Hangout backgrounds and eagerly bought up the firm's "Make America Rake Again" stickers.

But, the shelf life of a meme is fleeting. People moved on to other scandals — like when former Republication representative Dean Browning posted a tweet declaring himself to be a Black gay man who disapproved of Obama — and other memes, like the now-beloved, if tired, Bernie Mittens meme.

It wasn't until this weekend that people began talking about Four Seasons Total Landscaping again after the business appeared as the location for a Super Bowl commercial for Fiverr, an online marketplace for freelance talent.

The commercial opens on Four Seasons Total Landscaping owner, Marie Siravo, shouting, "Looks good, guys!" as a banner reading "& Press Venue!" is added to the business' sign. The gist of the commercial is that "with the right talent, you can build anything — even a press conference parking lot."

The announcement of "The Four Seasons Total Documentary" builds on some of the buzz surrounding that commercial. While no release information is available yet, Stoudt indicated that the film will feature interviews with Siravo and the company's director of sales, Sean Middleton, who would explain the decision-making that led to the infamous press conference — all with a sense of humor.

"This film is a chance to wipe the slate clean, not just for Four Seasons Total Landscaping, but for the entire country," Stoudt said.