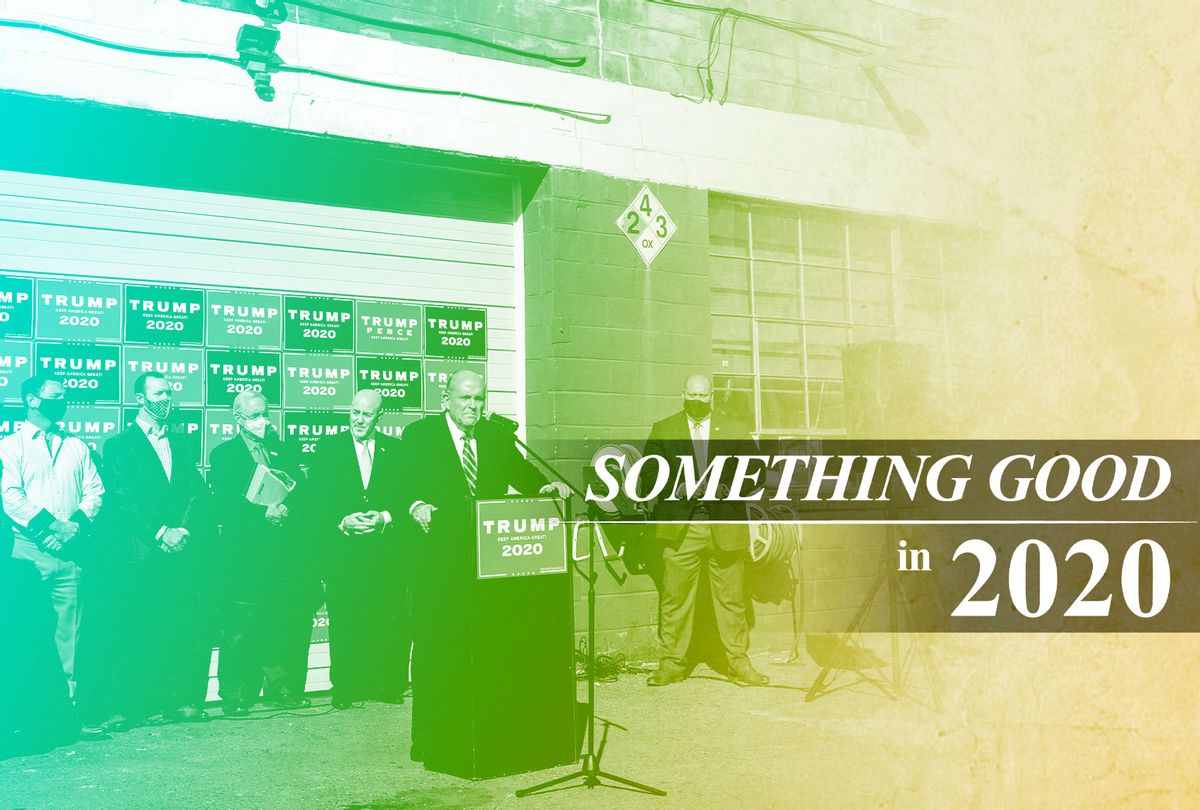 I woke up just in time to see Donald Trump's tweet that started it all: "Lawyers News Conference Four Seasons, Philadelphia. 11:00 a.m."

It was four days after the election — a Sunday — and I'd crashed out the night before after endlessly refreshing the AP Politics Twitter feed and analyzing the cursed New York Times election needle for what felt like 90 hours straight. But for the first time in years, I woke up with a glimmer of political hope for our nation as it looked like Trump's window to victory was closing.

The news of the press conference, which would be led by Rudy Giuliani, read as the announcement of the campaign's last stand. Little did I know how fitting that last stand it would be — a farcical end to a ridiculous presidency.

No relation with the hotel. Those words inspired a delicious kind of schadenfreude that was only topped when images from the press conference appeared online. The industrial corridor was hastily plastered with Trump signs and there was Guiliani, standing at a faux-wood lectern, peddling lies about voter fraud in front of a white pull-down garage door. To his left, there was a crematorium. To his right, a sex shop called Fantasy Island whose owner later came out and said, "We knew there had to be a screw-up somehow, because why would you pick a spot like this?"

It felt like a gaffe Gob Bluth from "Arrested Development" would have made. Envision it: Will Arnett as Gob, on a Segway, whizzing around a display of wilting potted plants to face a dismayed Michael (Jason Bateman).

"I meant the Four Seasons Hotel, Gob," Michael would say, reaching up to rub his temples. "Not a landscaping firm."

Cut to Gob muttering his endlessly GIF-able, "I've made a huge mistake."

Each update was like a hit of dopamine. A man featured at the press conference was a convicted sex offender, Politico reported the next day. The New York Times later found out that the mistake was "not in the booking, but in a garbled game of telephone" when Trump's legal team had told the president they'd booked the landscaping firm, but he heard the name and assumed it was at the upscale hotel.

In the end, it was just another example of Trump promising big things and under delivering. Like, you know, boasting about the creation of a massive border wall and only building 15 new miles, or inviting the Clemson Tigers, the 2019 national college football champions, for a White House dinner, only to serve them a buffet of Filet-O-Fish sandwiches and slices of Domino's pizza.

I'm thankful for the event for the same reason more than 3,000 people have signed a petition to place the landscaping firm on the National Register of Historic Places: "We as a nation need to remember where the travesty of the Trump administration died with a whimper."