Cold Whoppers in the White House: A visual metaphor for the Trump presidency 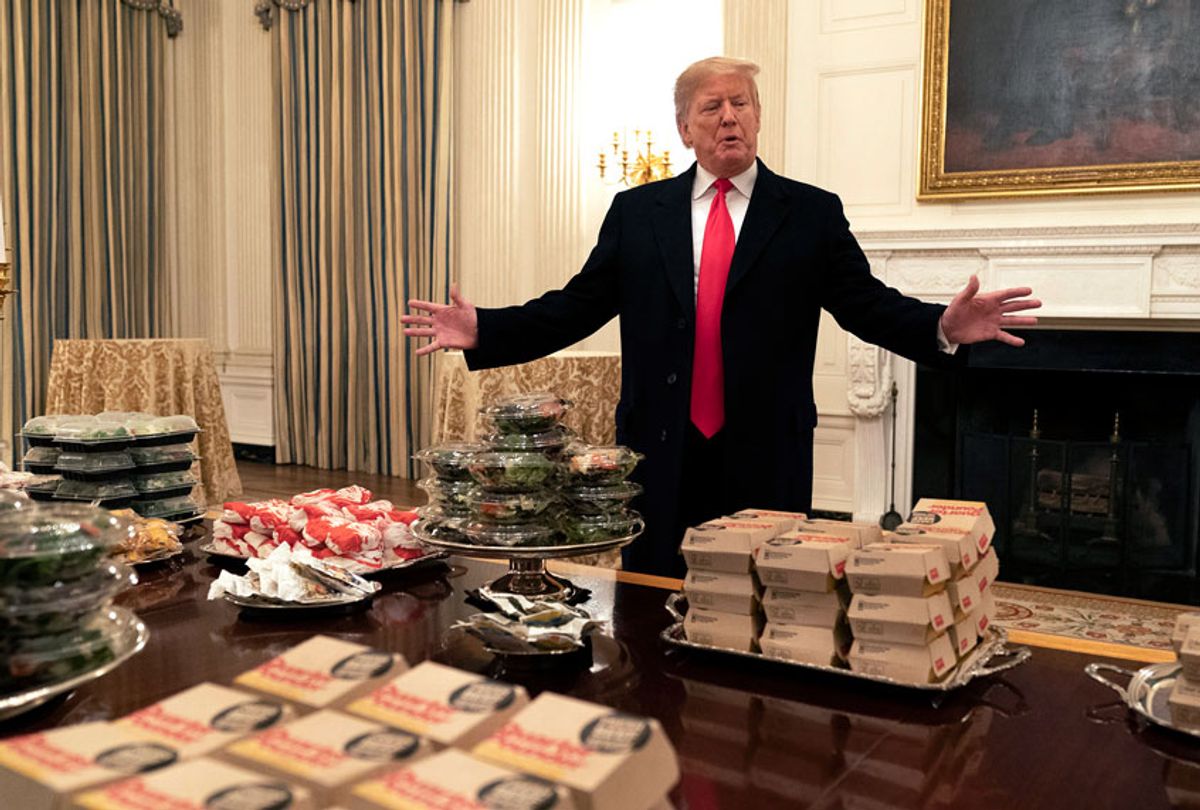 Donald Trump presents fast food to be served to the Clemson Tigers football team to celebrate their Championship at the White House on January 14, 2019 in Washington, DC. (Getty/Chris Kleponis)
--

Boxes of McDonald's Big Macs and Filet-O-Fish, along with burgers from Wendy's and Burger King, stacked on silver trays, alongside fast food salads and a bounty of McNuggets. Fries and Domino's pizzas provided variety. Handfuls of sauce tubs piled inside grand gravy boats; the room's dim lighting aided by candlelight from gold candelabras. This was the dinner provided by President Donald Trump at the White House Monday evening for the celebration of the national college football champions, the Clemson Tigers. Trump, in his uniform of an ill-fitting coat and a red tie, grinned at the fast food feast before him as he told reporters that it was a spread of "great American food." He added, "I like it all."

Over the last two years, Trump's chaotic presidency has slid up and down a spectrum of bizarre to terrifying, so little that the president does anymore is particularly surprising. But still, the dollar menu millionaire spectacle broke new ground even in Trump's White house, and  people on social media had a field day with the visuals. Adam Serwer from the Atlantic tweeted, "there's a certain cleverness to the fast food for college football champs at the White House as a metaphor for Trump presidency as false advertising and underwhelming results."

Championship athletes are usually served a meal from the White House kitchen, but due to the government shutdown, Trump decided to go in a different direction.

"Because the Democrats refuse to negotiate on border security," press secretary Sarah Huckabee Sanders said in a statement, "much of the residence staff at the White House is furloughed — so the president is personally paying for the event to be catered with some of everyone's favorite fast foods." Wow, he's so generous!

"If it's American, I like it. It's all American stuff," Trump told reporters, as if the fast food needed clarification on its origins. "300 hamburgers, many, many french fries — all of our favorite foods."

"I thought this was a joke," one athlete can be heard saying in a video from the dinner.

While cold Filet-o-Fish sandwiches would constitute A Bad Place restaurant for most, Trump seemed absolutely delighted at the food selection, most likely because it resembles his preferred diet of junk. Before the 2016 election, Trump listed off his McDonald's favorites at a CNN town hall meeting, saying "The Big Macs are great. The Quarter Pounder. It's great stuff."

Whereas President Barack Obama was known for eating seven almonds every night and President Bush had a penchant for mountain biking, even before becoming president, Trump clearly loved the optics of fast food opulence, sharing photos from his private jet or mahogany desk of his meal of KFC or Taco Bell. It's one more way the office has not changed him.

To be clear, there is nothing inherently wrong with fast food, but anyone who indulges knows there is a hierarchy, and McDonald's sits squarely at the bottom. Popeyes, Chick-fil-A, Shake Shack, or even Five Guys are all solid and easily obtainable options. (Let's not even get into the regional chains.) But leave it to Trump to have even abysmal taste in fast food.

"There is a particular awfulness to McDonald's or Burger King once it's gone cold," Helen Rosner wrote in the New Yorker. "By the time America's greatest collegiate football players arrived, in their navy blazers and Sunday shoes, to pick up porcelain plates and work their way through this cardboard buffet, the French fries would have grown cold and mealy, the burger buns soggy, the precise half-slice of American cheese on each Filet-o-Fish sandwich hardened to a tough, flavorless rectangle of yellow."

Still, any of the aforementioned options are rarely considered suitable for honored (adult) guests, never mind elite athletes who, contrary perhaps to Trump's assumptions, are often more health conscious than most. But also, these are college students, meaning they're likely broke, which makes eating fast food an everyday option (or even a necessity). Serving a dinner of McNuggets at the White House to mark their accomplishment is neither ironic nor subversive.

But as Trump will do, the president boasted of the value meal dinner as a success on Twitter, inflating the amount of food and even initially misspelling hamburgers as "hamberders." He also repeatedly emphasized that he paid for the meal, out of his own self-professed billion-dollar pocket.

The whole ordeal was undeniably hilarious, amplified by seemingly endless photos of the buffet and relentless Twitter barbs. It's worth considering how intense and racist the backlash from the right would have been had this fast food spread been coordinated by Obama, too. What are the consequences of a president who serves a fast food spread like this to young adults but remains hellbent on taking away health care from the most vulnerable? And beyond the comical optics of serving Baconators on the good china, where is the backlash from the GOP to Trump bragging about how much he shelled out on a Whopper party against a backdrop of 800,000 federal workers entering week four of no pay, due to his actions?

Alas, Trump's banquet serving his own drive-thru favorites only further proved his unmatched ability to center himself regardless of the occasion. Perhaps it's all part of the intentional aesthetic. After all, cold burgers are easier to swallow than Donald Trump in the White House.