It started when a white GOP politician from PA tweeted he was a gay Black Trump supporter. Then things got weird 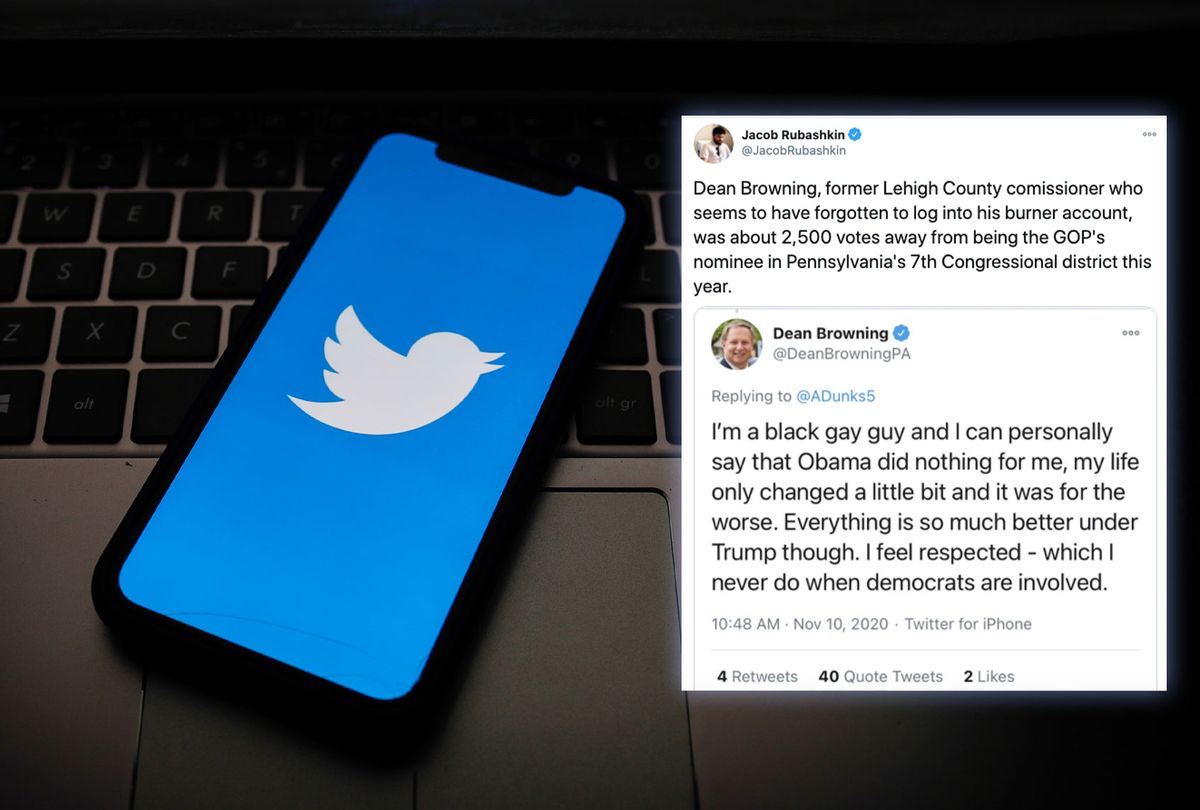 On Tuesday afternoon, Pennsylvania politician Dean Browning — a white, heterosexual, self-described "proud pro-life & pro-2A Christian conservative" — tweeted, "I'm a black gay guy and I can personally say that Obama did nothing for me, my life only changed a little bit and it was for the worse."

The tweet continued: "Everything is so much better under Trump though. I feel respected — which I never do when democrats are involved."

Browning, who is a former commissioner in Lehigh County, Pennsylvania, sent this tweet in response to one of his earlier posts, in which he said, "What Trump built in 4 years, Biden will destroy in 4 months."

Twitter users leapt on Browning's bizarre response, many speculating that it was obvious that he had forgotten to log into his "sock puppet" account. A sock puppet account is an online identity used for purposes of deception by concealing its owner's real identity. In this case, it seemed Browning had exposed an account on which he masquerades as a gay Black Trump supporter.

If this situation already seems bizarre to you, just buckle up. Things are about to get much weirder.

After several hours had passed, Browning posted an explanation by way of an additional tweet.

"Regarding the tweet that is going viral from my account — I was quoting a message that I received earlier this week from a follower," he wrote. "Sorry if context was not clear. Trump received record minority votes & record LGBTQ votes. Many people won't say it vocally, but do in private."

But then, in a now-deleted tweet, the Washington Post's Philip Bump found a contender for Browning's sock puppet account. "You know who replies to Dean Browning a lot? 'Dan Purdy,' a gay black Trump supporter who joined Twitter in October," wrote Bump. 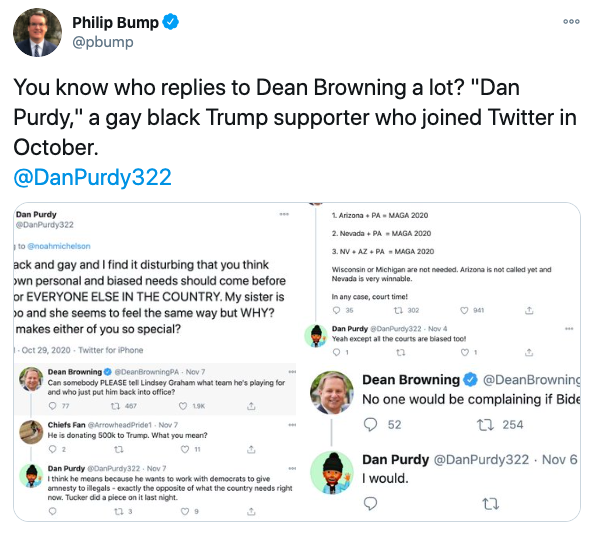 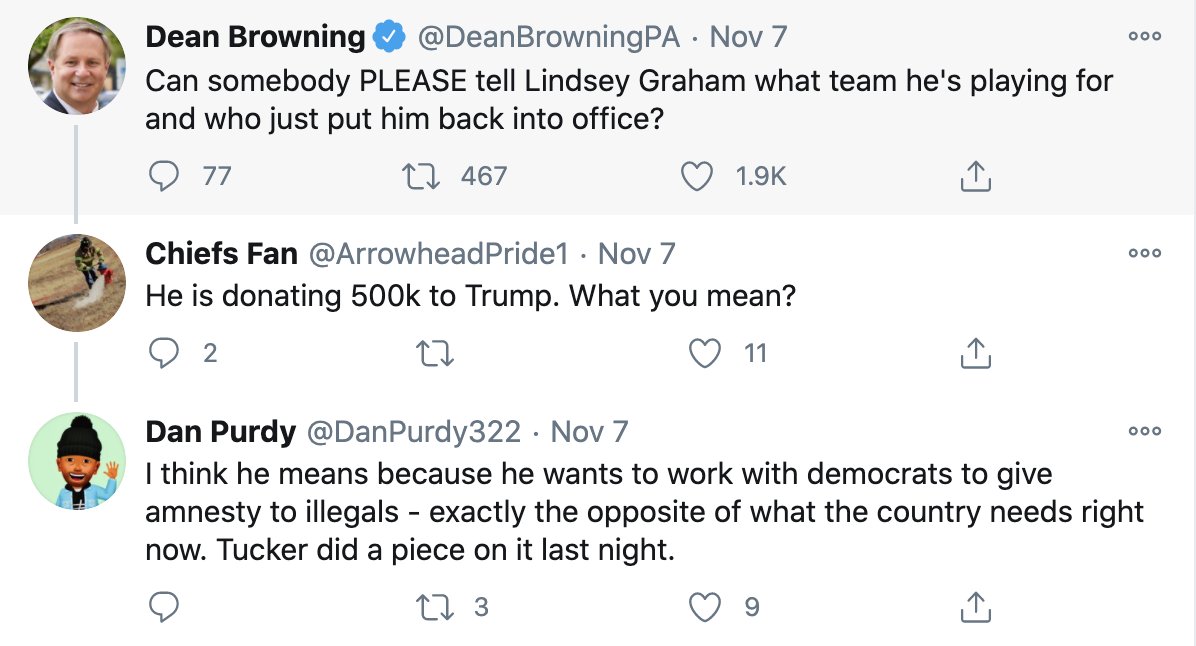 The Dan Purdy account featured an illustrated avatar of a Black man in a black beanie and bright blue jacket. The header image was a Trump 2020 logo. Many Twitter users quickly pointed out that the account also had a history of posting racist and sexist statements like, "I love the taste of black girl fear" and "black women will be the death of America."

When Salon reached out to Browning, he responded via email that his failure to make it clear that his viral tweet was a follower's quote was "an oversight on [his] part" and that "there will be a video up shortly that will clear things up."

Sure enough, just after 5pm, the Dan Purdy account posted a video — the first to be posted from the account — that featured a middle-aged Black man claiming, "I sent that message to Dean, Dean accidentally posted it somehow, that's the end of the story. No, he's not a sock puppet. No, I'm not a bot."

At this point, the entire saga had gone bananas on social media, and a horde of Twitter sleuths began dissecting the video. Some theorized that Purdy was merely an actor hired by Browning to help cover his gaffe. "Fiverr will get you any Dan Purdy you want," one tweeted in response, referring to online platform fiverr.com, in which anyone can quickly hire freelance talent.

Then there was a break in the case.

Some internet sleuths noticed the avatar used on the Dan Purdy account was identical to one used as a profile picture on the Facebook account of a Philadelphia man named Byl Holte — and that the man tagged in photos as Holte bore a shocking resemblance to the man who appeared in Purdy's Twitter video (purported to be Purdy).

A dive into Holte's background reveals several interesting things: He's written several articles on Medium, where he identifies himself as an "Anti-feminist TV Critic" and complains about anti-racism and feminism in the film industry; he is listed on LinkedIn as a "boutique landscape designer" in Pennsylvania; And, in the weirdest twist yet, he is music legend Patti LaBelle's adopted son.

LaBelle adopted the two children of her sister, Jackie Holte, after her death in 1989. They are named Stayce and William, or "Byl." Byl Holte's Facebook account features public photos of him with LaBelle at family gatherings.

The Dan Purdy account has since been deactivated, and Browning's last tweet reads: "I see I'm trending with Patti LaBelle tonight. I guess we've not gone only viral  — but over the rainbow."

Regardless, some questions still remain unanswered: What is the relationship between Holte and Browning? Is the "Dan Purdy" account actually Holte's?  Was Browning ignorant of the racist and sexist comments on the fake Dan Purdy account — and if not, why choose to quote that specific follower? And, most importantly, what does Patti LaBelle think about all this?