The star's passion carries Lee Daniels' latest film, which never allows the audience to fully connect with her song 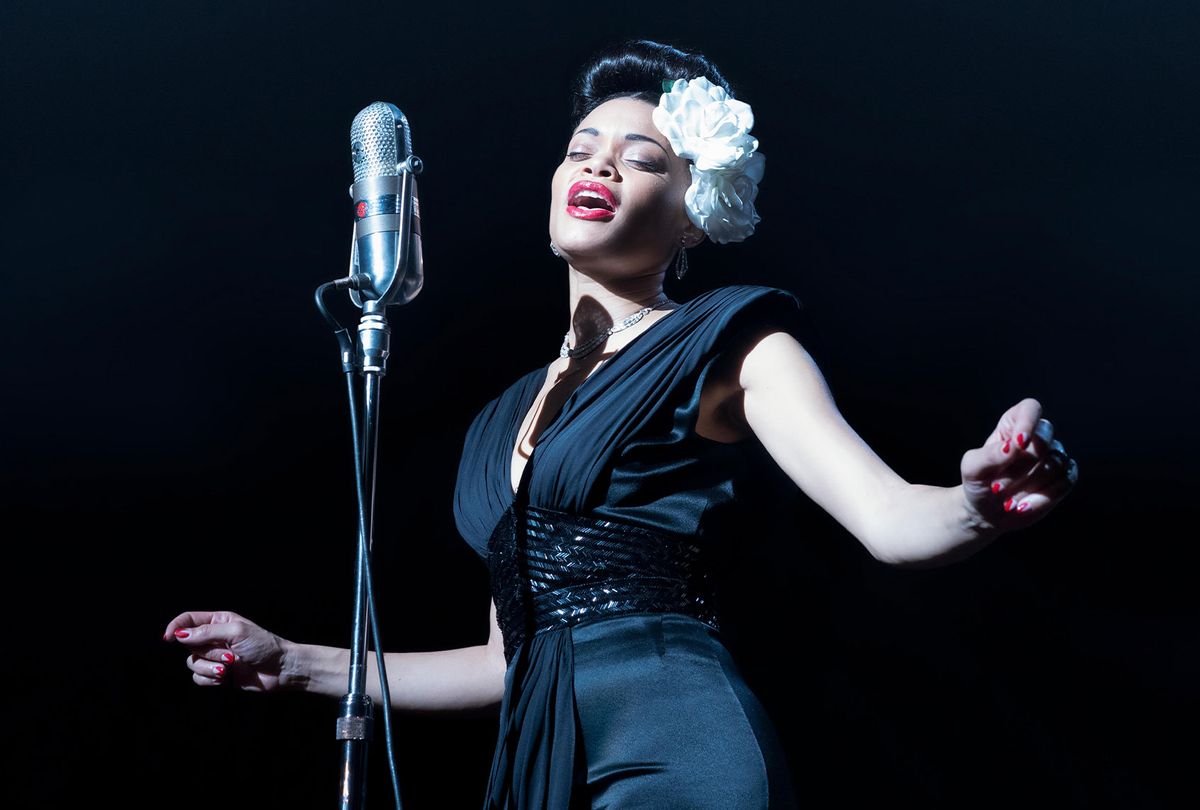 To full comprehend the hard road Billie Holiday traveled in her final years, see if you can get your hands on "Lady in Autumn: The Best of The Verve Years." More than merely a compilation, these songs gleaned from sets recorded between 1946 and 1959, the year she died at age 44, create an unsparing biography of decline told through Holiday's voice. You can hear the ways that substance abuse and despair ravaged her voice, and you can also sense the spirit beneath it remained unbowed through those final sessions.

Whether Andra Day listened to this collection to inform her performance in "The United States vs. Billie Holiday" isn't stated in the press notes, but I hope she did because the story that collection tells is the one she's channeling onscreen. Like the life chapters each of those songs represents, the energy she delivers is extraordinary, soul-wrecking and undeniably true.

Day's performance is truly its own narrative. The movie surrounding it, directed by Lee Daniels, never quite meets the high bar she's setting, which is aggravating. While "The United States vs. Billie Holiday" covers nearly the same period as "Lady in Autumn." Pulitzer Prize-winning playwright Suzan-Lori Parks' script is less about Holiday's last decade than the government's scheme to destroy her, a striking passage of which few people are aware.

In drawing inspiration from Johann Hari's 2015 bestseller "​Chasing The Scream: The First and Last Days of the War on Drugs," Daniels' latest tries to explore the reasons that Federal Bureau of Narcotics Commissioner Harry J. Anslinger (Garrett Hedlund) hunted the singer.

The surface-level why of Anslinger's determination is easy to comprehend: His post-prohibition war on drugs needed a celebrity of whom he could make an example that wouldn't turn the public against him. White Hollywood stars and musicians who used illicit substances got a pass from the Bureau. Holiday, one of the most famous Black women in Jim Crow-era America and jazz luminary, made for a much easier target.

After launching from this berth, though, the plot never finds a melodic refrain or emotional anchor, indecisively flitting between some version of a thin historical re-enactment and flirtation with romantic tragedy.

But in her feature debut Day effortlessly cultivates the hunger that drove Holiday, and that passion holds together a period piece that otherwise leaves us wanting. That, and her plausible recreation of Holiday's signature rasp and swirling lilt in her singing style, make "The United States vs. Billie Holiday" worth sitting through.

Day's nearly dead-on impersonation of Holiday's voice is not entirely unanticipated; critics have previously likened her vocal style to that of Eartha Kitt. One might say Holiday's manner of speaking contains a little more nicotine than Kitt's and, given this account's circumstances, a heavy anger.

Daniels gives us a stunning flash of this early on when Leslie Jordan's blithely clueless (and ludicrously be-wigged) journalist Reginald Lord Devine merrily opens his 1957 interview by asking Holiday what it's like to be a colored woman. Day's songstress cuts her eyes at Devine and replies in Holiday's simmering and tired-of-it voice, "Would you ask Doris Day that question?"

Despite these telling moments you may still yearn for a look at Holiday that isn't frontloaded by tragedy.

"The United States vs. Billie Holiday" could have been built upon a catalog on the jazz legend's life that is in some ways defined by 1972's "Lady Sings the Blues," which casts Diana Ross as Holiday. Instead it continues a tradition of defining the artist through her pain instead of being curious about the light that shines through her earlier work.

There's no question that Holiday's substance abuse was a coping mechanism to numb the painful memories of childhood sexual abuse and trafficking, or that her addiction accelerated her demise. However, "The United States vs. Billie Holiday" leans hard into the notion that whatever joy she exuded was mainly an effect of the heroin, booze and little else, which isn't an especially original view of Holiday's life.

But therein lies its most vexing flaw: the movie and Day give us an expansive view at the singer's soul without confidently claiming a point of view or exploring the interiority of the people who knew her best. The cast doesn't lack for such ways into her personality, but it sidelines personas such as Holiday's longtime friend and musical partner Lester "Prez" Young (Tyler James Williams) and other loyal confidantes, including Roslyn (Da'Vine Joy Randolph) and Miss Freddy (Miss Lawrence). All of them love the singer through her career stumbles and her fair-weather tendencies as a friend.

Daniels and Parks establish from the start that Anslinger's real reason for going after Holiday was her refusal to stop singing the anti-lynching lament "Strange Fruit," which became as much a part of her signature as the gardenias she wore in her hair. 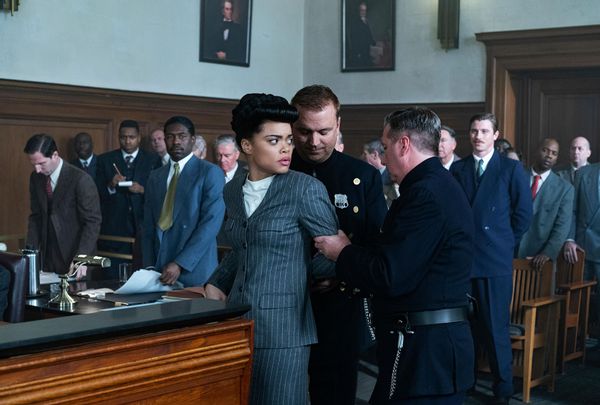 To ensnare Holiday, Anslinger assigns up-and-coming Black agent Jimmy Fletcher (Trevante Rhodes, "Moonlight") to infiltrate her inner circle, find out her supplier and set both up in a drug sting that sets in motion a cascade of career difficulties for Holiday. Anslinger pulls strings to ensure Holiday serves prison time, and blocks her ability to secure a cabaret license when she is released, preventing her from performing in jazz clubs.

This also makes her susceptible to exploitation by a number of men, lovers and ex-husbands alike, a tale many of us know. Daniels insinuates that Fletcher also fell in love with the singer, which isn't entirely myth; the real Fletcher expressed regret for his part in Anslinger's conspiracy to destroy Holiday, and it haunted him until the end of his life.

How fascinating it would have been to follow Rhodes through this chronicle, much in the way "Judas and the Black Messiah" makes Lakeith Stanfield's FBI informant William O'Neal our way in to connecting with assassinated Black Panther leader Fred Hampton (Daniel Kaluuya).

You may read a number of reviews mentioning that film alongside this as an example of an effectively civil rights period examination; it also shows, by example, what's missing here. By neglecting to stay with a single point of view, or even two, we never deeply empathize with anything or anyone beyond Holiday, and even that relies on the viewer clinging to some aspect of her legend and not her individual humanity.

Thus we're relegated to glimpses of thoughtful portrayals that defy profound feeling. Rhodes bounds through the gamut of emotion but Daniels' scattershot direction doesn't pull us along in his wake. And he receives the most consideration in that regard. Hedlund's character is flat (and, for whatever reason, almost entirely sanitized of the real Anslinger's extreme racist views); Williams' Prez barely registers as a key figure in Holiday's life. Natasha Lyonne's appearance as Tallulah Bankhead may as well be an afterthought.

Instead of expanding their perspective Daniels freights his work with cinematic flounces. Time-jumps, a fantasy sequence that bleeds into reality  – and feels almost like a direct lift of a shorter scene from 2007's "La Vie en Rose" – fades between black and white and color, they all get screen time while adding little to whatever dialogue Daniels may have sought to have with his audience.

Extraordinary performances in mediocre movies about famous and infamous people aren't unusual; the aforementioned "La Vie en Rose" proves this. The film itself is only serviceable, but Marion Cotillard's Édith Piaf was a knockout. Day's Billie Holiday achieves a higher level of brilliance than that by becoming the woman she plays and living her songs. She creates a compelling epic within a passable attempt at one. Fortunately for the audience, her essence defies being muted.

"The United States vs. Billie Holiday" is now streaming on Hulu.