The 2020 Emmys give us stars, just like us! At home, waiting for something good to happen

Jimmy Kimmel's third outing at host was unremarkable, the wins mostly predictable, but in 2020 that's fine by us 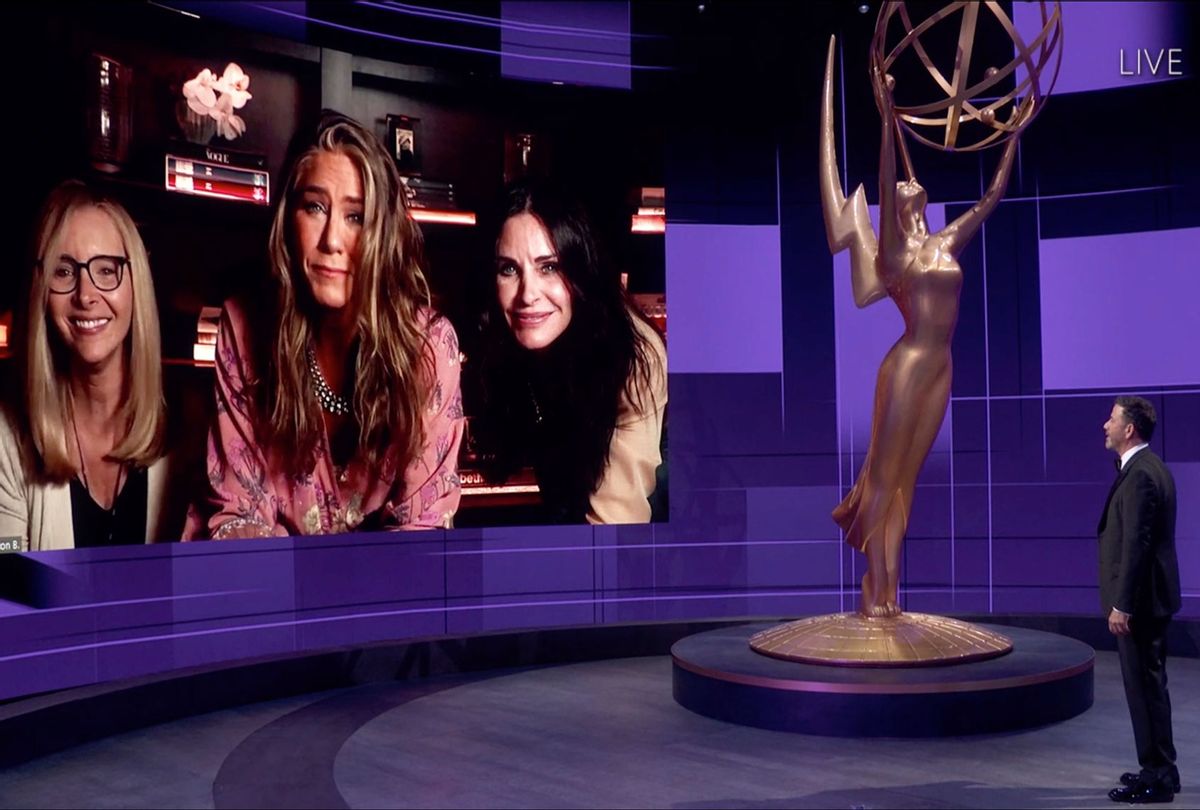 There is no way that the 72nd Emmys, aka the Pandemmys, aka the No People's Choice Awards, could have been normal. The red carpet pageantry, the celebrity glad-handing, the candid moments caught on camera when the stars drop their practiced smiles or chose not to laugh at a joke that bombs — all of that got tossed out the window from the moment we all started social distancing for our lives.

What it could have been was bolder … if it weren't brought to us by the notoriously staid Academy of Television Arts and Sciences. It is possible to engineer an entertaining awards telecast in the COVID-19 era – MTV's recently aired Video Music Awards proved that, celebrating music by creating distant spaces for performers and making the outside world their stage.

A yen for high daring runs in music industry's blood stream, and its videos are an extension of that. Television is by its very definition a medium whose most successful shows cast a broad net, and that's why DJ D-Nice busted out tunes that are only slightly younger than "I Love Lucy" as the telecast cut to commercials.

Boldness was off the menu for the night, but awkwardness was very much the catch of the day. Technically, the ABC telecast was quite a production feat. Nominees streamed in live from 100 different feeds going all at once from locations around the globe.

The statues were delivered to the winners' doorsteps by people wearing puffy suits designed to look like tuxedos crossed with hazmat gear, save for nominees in the Talk Variety and Reality Competition categories, who received mystery boxes that opened by remote, revealing a spring-loaded hand and an explosion of glitter.

Jimmy Kimmel, returning for his third time to host the Emmys, mostly kept the night moving along; at least the telecast only went four minutes over its allotted three hours. To the credit of the producers in charge of wrangling all of those remote links, none of the winners' speeches dropped — and in fact, the whole casual vibe of it all made the night feel less stale.

"What could possibly go right?" Kimmel joked as he stood in front of a wall of screens showing actors, producers and directors in casual settings. The answer is, more than you'd like.

Any Emmys that's remarkable for running smoothly can be considered a win. This telecast, held in the midst of a pandemic and with most of its celebrities coming to us from their homes or exclusive gatherings in parts unknown, held the salubrious appearance of intimacy and commiseration. Kimmel's monologue did not mention the words "president" or "Trump" once. In fact, the only reference to that entity at all was in his reassuring us that the auditorium where the production was taking place was mostly empty: "Of course I'm here all alone. Of course we don't have an audience. This isn't a MAGA rally. It's the Emmys."

There were few firebrand political statements except in cases where such call-outs were expected. "Watchmen" star Regina King and "Mrs. America" co-lead Uzo Aduba, both Emmy winners on Sunday, wore shirts with Breonna Taylor's name on them, while "This Is Us" star Sterling K. Brown traded the usual button-down under his suit jacket for a Black Lives Matter t-shirt.

As Mark Ruffalo accepted his Outstanding Lead Actor Emmy for his work in the limited series "I Know This Much Is True" he recited his usual list of thank-yous before launching into a warm but fervent plea for the audience to "vote for love and compassion and kindness."

Ruffalo's audio was remarkably choppy, as were the feeds for other nominees, which we've gotten used to in our Zoom-facilitated age. Oddly, though, this was part of the charm along with the blend of casual with couture.

Nobody dropped out during the telecast, but that also meant the surprises were relatively few. This year's round of Emmys was largely defined by three titles: HBO's "Succession," HBO's "Watchmen," and Pop TV's "Schitt's Creek." Those familiar with Emmy voter habits would call the strong showings of the first two titles in that list a foregone conclusion, but the full comedy sweep for "Schitt's Creek" was a surprise, if not altogether blindsiding.

That show's cast gathered in Canada inside of what seemed to be a formal reception venue with glass walls and a great deal of ventilation. Everyone was masked until the winners got up to make their acceptance speeches, each delivered with a share of genuine surprise, natural happiness and appreciation.

When you think about it, the "Schitt's Creek" conquest makes complete sense in 2020. For most of its six seasons its audience was minuscule. After the Canadian production was picked up by (and gobbled up on) Netflix, the fanbase swelled. The show's recently-aired finale season was accompanied by a full-throttle media blitz ensuring that even those who had never heard of the Roses at least checked out a few episodes.

Then, after people retreated into their houses and the world fell into contentious chaos and despair, what better antidote was and is there than a sweet, heartfelt show about entitled people learning to live with and love their neighbors?

Outstanding Drama Emmy winner "Succession" didn't score a complete conquest in its nominated categories, but it netted individual awards for star Jeremy Strong for Lead Actor, an Outstanding Writing Emmy for series creator Jesse Armstrong and an Outstanding Directing Emmy for Andrij Parekh for helming the "Hunting" episode, which includes the memorable "boar on the floor" cringe-fest.

In an era defined by corrupt media empires and a loveless ruling class, "Succession" is an apt choice, as is "Watchmen," the Limited Series Emmy winner which also scored an Outstanding Writing for series creator Damon Lindelof and Cord Jefferson for the superior "This Extraordinary Being" and an Outstanding Supporting Actor Emmy for Yahya Abdul-Mateen II, who accepted the honor by paying tribute to Black women.

The Outstanding Actress in a Limited Series win for series star King was all but preordained; she's won four Emmys within the last six years. "Watchmen" lost to Netflix's "Unorthodox" in the Outstanding Directing for a Limited Series; still, overall it won 11 of HBO's 30 Emmy wins in 2020.

HBO always comes up wealthy during awards season, and its streak continued on Sunday, scoring wins for "Last Week Tonight with John Oliver" in Outstanding Variety Talk Series and Ruffalo.

Those were the foreseen wins – Ruffalo's limited series, in fact, is brazen Emmy bait. Zendaya's Emmy clinch for Outstanding Actress in a Drama for her tour de force turn in "Euphoria," on the other hand, was very much a stunner, making her the youngest person to win in that category. She beat "The Morning Show" star Jennifer Aniston, "Killing Eve" stars Sandra Oh and Jodie Comer (last year's winner), "Ozark" lead Laura Linney and the Queen herself, "The Crown" star Olivia Colman.

Similarly shocking but more expected was Aduba's Best Supporting Actress in a Limited Series for her dead-on portrayal of Shirley Chisholm in FX's "Mrs. America," which also created a charming comedy moment when, directly after her thank you, she yelled offscreen, "Mom! I won!"

And there were wins for Aniston's "Morning Show" co-star Billy Crudup for Outstanding Supporting Actor in a Drama plus a repeat for Julia Garner, who won her second Supporting Actress in a Drama Emmy for her turn on "Ozark."

Even in years when the winners list is predictable, the show itself has a chance to stand out for all the right and wrong reasons. Kimmel's third at-bat as the Emmys host was a peculiar blend of the two. His past awards turns were memorable for his generally avuncular comportment dappled with a few off-color jokes. Without an audience, there weren't any opportunities to, say, have the "Stranger Things" cast hand out peanut butter and jelly sandwiches.

Instead, he opened with a bit that went on too long using archival footage of audiences from awards shows past to create the illusion of a live awards show, finally shattering the ruse when one of the snippets included a shot of him in one of the seats.

A lot of the scripted skits were like that – cute moments that overplayed their hand by a beat or five.  Some production choices worked quite well nonetheless, particularly the decision to invite essential workers to present some of the awards, including a truck driver, farmer, a teacher and a nurse — all women — as well as a delivery person and a pair of sibling doctors.

A few celebrities showed up live to remind us that this is still a Hollywood self-congratulatory fest, including Tracee Ellis Ross, Jennifer Aniston and "Fresh Off the Boat" star Randall Park walking the production's distanced presenters walkway with an alpaca. Why?

"It's fun," Kimmel explained in his monologue, "and right now we need fun. My God, we need fun."

Familiarity, too. Jason Bateman showed up early in the telecast once the producers cut to Kimmel in a mostly empty auditorium with cardboard cut-outs of celebrities in the seats, major league baseball-style.

He had a brief exchange with Kimmel before exiting. Aniston, whose presenter gig ended with a pyro gag that almost got out of hand, appeared to zip home in order to be present in case an Emmy were delivered to her door, and who was waiting for her but her "Friends" Courteney Cox and Lisa Kudrow? Clap-clap-clap-clap.

But here's the thing about an audience-free Emmys telecast: although those of us watching at home weren't subjected to artificial laughter, we didn't get the thrill of witnessing uncomfortable silence or even groans at Kimmel's clunkier moments, such as a strained bit with Anthony Anderson goading Kimmel into yelling Black Lives Matter.

Elsewhere, while introducing the Talk Variety category, Kimmel quipped that there was only one American nominee, mentioning Stephen Colbert (and eliciting an indignant "hey!" from Oliver) before joking after Oliver's win, "I will be reporting him to ICE tomorrow."

Not only is that in poor taste, it's also incorrect. Oliver became an American citizen in late 2019. Anyway, congratulations to John Oliver and kudos for rocking a hoodie on what is supposedly the most prestigious night of the year for TV.

That was a forgettable moment. The night's most indelible came from the Television Academy's 2020 Governors Award recipient Tyler Perry, whose acceptance speech was a collage of memory, history, pride and inclusion. He talked about receiving a quilt from his grandmother that he failed to value, only to realize when he was much older what it represented.

In referring to his expansive studio, he said, "she couldn't imagine me owning land that was once a Confederate army base, where Confederate soldiers plotted and planned on how to keep Blacks enslaved."

"And now, on that very land, Black people, white people, gay, straight, lesbian, transgender, ex-cons, Latin, Asian, all of us come together, working. All coming together to add patches to a quilt that is as diverse as it can be — diversity at its best. I stand here tonight to say thank you to all of the people who are celebrating and know the value of every patch and every story and every color that makes up this quilt that is our business, this quilt that is our lives. This quilt that is America."

This is also a way to consider 72nd Emmys, a patchwork of screens and anticipation that came together and despite all concerns, held. One day we'll go back to awards shows that can be held without fear of going down in history as super spreader events, but for now we can say there as some comfort in gazing at TV's stars and realizing that, in this way, they are kinda sorta like us.