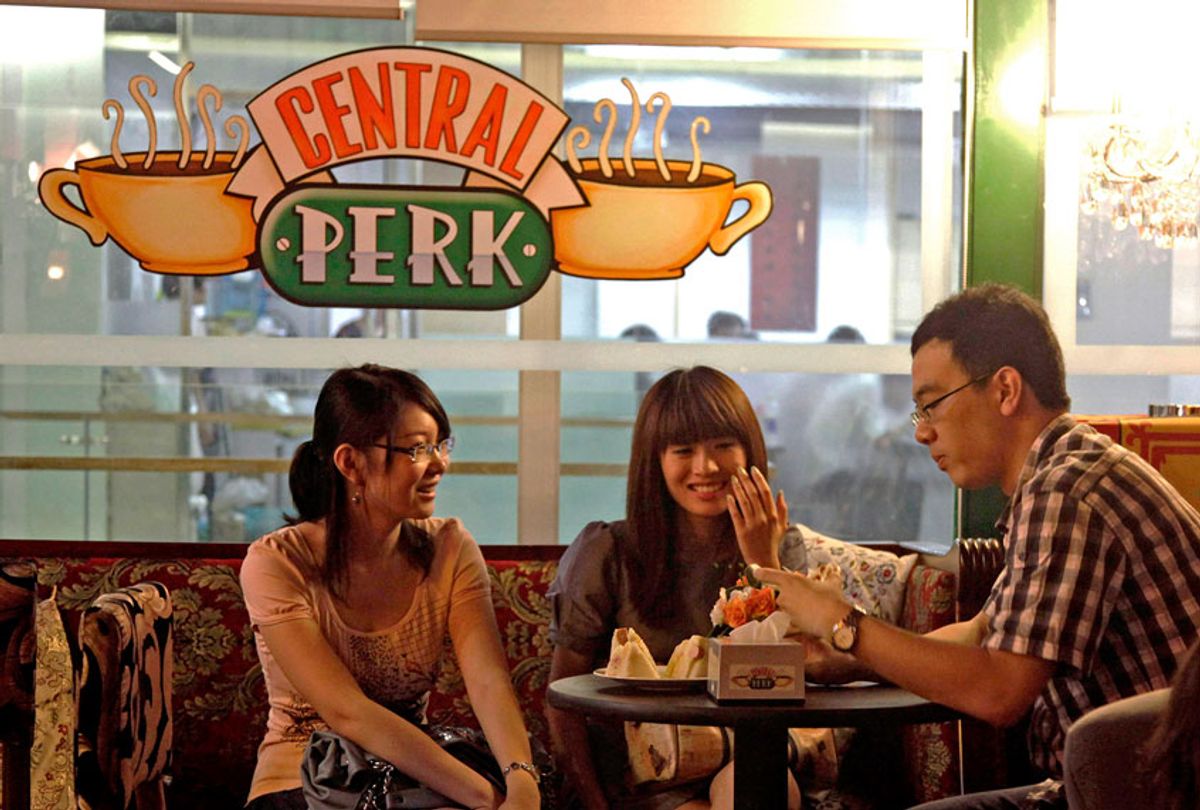 Perhaps you've heard, but millennials and Gen Z don't like labels. They don't like being assigned identities, placed in boxes or having anything overtly sold to them. What sublime irony it is  — don't you think? — to know that each of these cohorts made "Friends" one of the most effective sales platforms on TV, into the streaming industry's hottest commodity.

This doesn't merely refer to the show's impact as a hairstyle influencer, its subliminal doubling as a Pottery Barn showcase or its usefulness as an earlier personality-type guide long before BuzzFeed got into that business. (Most people were fine with being a Chandler or a Monica. Nobody wanted to be a Ross.)

"Friends" plays potent role in selling the concept of adulthood to generations maturing at a point of extreme cultural shifts owing to transformations in technology, the economy and culture. The oldest millennials were in their early teens when "Friends" debuted in 1994; when it ended in 2004, some of its youngest fans hadn't been born yet.

Within the decade of its existence mobile phone technology evolved at a rapid pace, with its main fanbase growing at the same time. Cell phone ownership shifted from a luxury to a necessity to a replacement for landlines, and we probably don't need to run through every step of what's happened since.

So let's cut to the present, when people are more likely to communicate via text than call each other on the phone, more likely to stare into a small screen to consume a show than share the experience with others on a TV, and more likely to search for answers from strangers on the Internet than source knowledge from peers or relatives.

In this world, where people are more likely to seek out romance or make new friendships with the assistance of an online service, "Friends" makes more sense than reality.

Save for Rachel and brother-sister duo Ross and Monica (who all grew up together) and Chandler (originally a friend of Ross) these are folks who probably would not have befriended one another organically in 2019, or even 2009.

They don't work at the same places or share the same general affinities, save for the one they hold for each other. And while it's true that Joey met Chandler by way of a roommate-seeking ad (as did Phoebe with Monica, apparently?)  these situations generally do not result in a six-person roommate coffee house klatch.

"Friends" is a window into an anachronistic existence where people have the time and inclination to hang out and chat at a coffee shop. What's more, even the extras are doing some version of that. Does Central Perk have wifi? What's wifi, anyway?

"Friends" displays a reality where characters contend with romances gone bad with varying degrees of success or failure ("We were on a break!" or "I'm going to Yemen!"), where personality quirks cause friction, where the phrases "rent control" and "illegal sublet" explain why young people just starting out in their careers can afford very nice apartments in Manhattan (as reproduced on the Warner Bros. lot in Los Angeles).

They all had jobs, although for the longest time one could never be sure what exactly Chandler did. They contended with births and deaths and neighbors who walk around naked in their apartments while leaving the blinds open. And while nothing deeply horrifying happened to any Friend beyond mortification, a couple of them do get mugged along the way. It is New York City in the '90s, after all.

Basically, then, to a person growing up in a post-9/11 world where withdrawing from interpersonal contact with loved ones and strangers alike is all too easy, "Friends" promotes a version of independent life in the best light possible. From The Rembrandt's comforting theme song assuring us that our friends will always be there for us, to the bouncy end credits, it gently guides the young and confused past the many checkpoints of striking out solo for the first time. It's Waze, only for #adulting.

"Friends" wasn't born to play this role, of course; as the story goes, when series creators Marta Kauffman and David Crane pitched the series, it was intended to be a decidedly Generation X show about a bunch of 20-somethings that hang out in a local coffee shop.

And actually, this aspect of the Gen X experience has some truth to it, thanks to the popularity of "Reality Bites" and "Singles" and "Slackers," films that captured a generalized ideal of a cohort that was never truly that cohesive or easy to peg.

"Friends," in comparison, is a cleaner, brighter, fantasized version of one's twenties, with enough of a truth shot to make the first foray into independence appealing. "Girls" performed a version of this, but one that served bitter in heaping portions beside sweet, by way of a heroine who is ridiculously selfish.

"How I Met Your Mother" replicated some of the "Friends" magic, but its formula grated after a time and the plots didn't convey any lessons beyond that of Neil Patrick Harris' appeal. (And it's interesting to consider that "HIMYM" did almost exactly what "Friends" did with Ross and Rachel, introducing Ted to Robin in the pilot and having them end up together in the finale … the difference being that the later show was then crucified for that move.)

The "Friends" pilot firmly and expediently establishes the series' and the young adult's raison d'être in under 30 minutes: We meet Ross and Rachel as their respective marriage and impending marriage are separately and concurrently breaking up, and Monica as she discovers the nice guy she's starting to date is a liar. Chandler, Joey and Phoebe bear witness to this, revealing their very different personalities and origin stories in the process.

But to me, what may be the most important moment in the pilot occurs when the group sits Rachel down and makes her cut up the credit cards keeping her reliant on her father's money. Each friend assures Rachel that she has to figure out her life for herself if she wants to have any sense of agency and control over her destiny, just as each admits that it's not always going to be simple. The real world, Monica tells Rachel, sucks. She quickly follows with, "You're gonna love it."

"Friends" stories have been flooding our news feeds for weeks now as publications mark the 25th anniversary of the series debut with character examinations, biographical glimpses into the writers' rooms and nostalgic commentary about the show's enduring appeal.

Behind all that celebration of its resilience, though, is a marketplace valuation of its dual worth as a pacifying how-to guide. The precise anniversary date — September 22 — coincides with the broadcast of the 71st annual Primetime Emmy Awards.

That will be airing on Fox, and fortunately for Netflix, the Emmys telecasts haven't been ratings threats for many years now. Why would Netflix care? Because "Friends" remains one of the most popular series on its service, so much that the company famously spent $100 million to continue licensing the program from WarnerMedia until the end of this year, with Warner reclaiming the series to air it on its own streaming service HBO Max starting in 2020. That eviction date will be here sooner than you think.

And Netflix, along with other services, are scrambling to land streaming rights to series that may have similar abiding appeal to "Friends" and "The Office," which is slightly more popular and due to remain with Netflix through 2021.

This week the streamer announced it has grabbed "Seinfeld" out from under Hulu, paying around $500 million to do so. "Seinfeld" begins airing on Netflix in 2021, although Jerry, Elaine, George and Kramer have none of the heartwarming appeal or sexiness of Rachel, Ross, Monica, Chandler, Phoebe and Joey.

But if you think that hurts, consider that HBO Max also locked down "The Big Bang Theory" through 2028, reportedly in a deal estimated to be worth billions. In comparison HBO Max forked over a reported $425 million to keep "Friends" on the platform for five years. NBC Universal, which is reclaiming "The Office" from Netflix, paid more than $500 million for those exclusive global streaming rights.

The bottom line for consumers of any TV viewing generation: What platform you choose to watch the shows that speak to you may say more about who you are than the content itself.

"The Big Bang Theory" is very much a descendant of "Friends," arguably the most successful among the many series that attempted to replicate its formula. And the similarities are numerous, with much of the action taking place around large comfortable couches and friends supporting one another through romantic adventures, break-ups, weddings, death, career ups and downs, and the joy and friction of cohabitation.

That show turns 20 in 2027, more than enough time to hook into later Gen Zers and speak to what they understand about the world in ways we can't even fathom.  Whether we'll start to label each other as "Friends" people or "Big Bang" folks as a means of understanding who we are, who can say. But each does a pretty good job of pitching the joy and pain of the real world to people raised by screens and trying, somehow, to understand what nobody is telling them about how life is going to be.