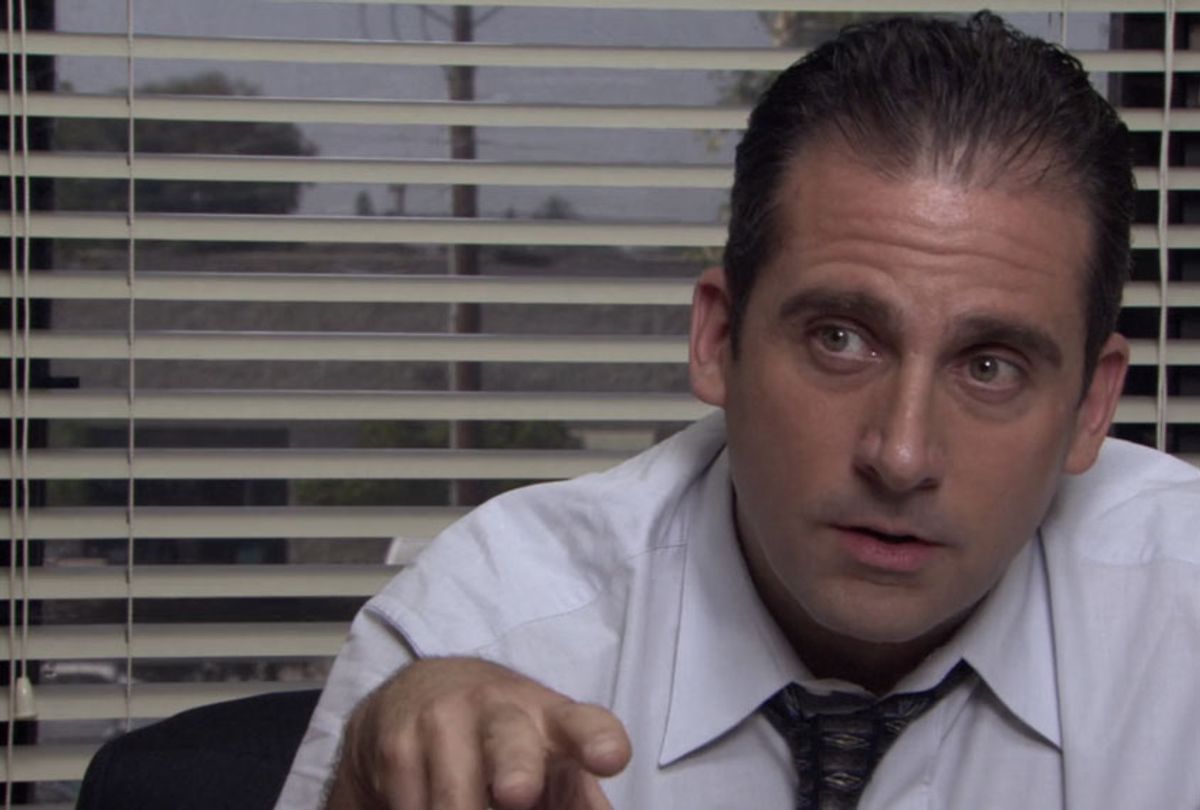 Steve Carell in "The Office" (NBC/Screengrab)
--

Yesterday, NBC announced they would be pulling the “The Office” from Netflix at the end of 2020, and a generation of Dunder-Mifflin fans went into early mourning.

“The Office” will still be available for streamers in 2021 — just on NBC’s streaming service which is set to launch in the first quarter of 2020.

In a statement,  Bonnie Hammer, the chairman of NBCUniversal Direct-to-Consumer and Digital Enterprises, said, “‘The Office’ has become a staple of pop-culture and is a rare gem whose relevance continues to grow at a time when fans have more entertainment choices than ever before. We can’t wait to welcome the gang from Dunder Mifflin to NBCUniversal’s new streaming service.”

But this wasn’t any consolation for fans of “The Office” who made it the most-watched Netflix show in 2018.

Instead, some particularly dedicated viewers started a petition on Change.org asking for Netflix to keep the show. (There are over 2,000 signatures and counting.)

On the petition, one commenter wrote, “The office is a cultural icon, a representative of our lives that carries with it an unprecedented significance. It should and needs to be widely available. It belongs to all of us.”

While another fan commented: “I can’t fall asleep without the office on volume level four.”

Meanwhile others took to Twitter and began using GIFS and clips from “The Office” to express their dismay about “The Office” decision.

And isn’t that what makes “The Office” so special as a show? There’s a one-liner and an image (here I’m thinking of Dwight Schrute sitting behind a dumpster, playing a somber song on a bright green recorder) for nearly any occasion.

The series specialized in oversized emotions within a setting that breeds monotony. This, plus the faux-documentary style — fresh at the time — elevated it beyond just another workplace comedy. As Salon's then-TV critic Willa Paskin wrote on the occasion of the series finale, "all the Dunder Miflinites, with all their peccadilloes and implacable self-confidence have a camera gleaming in their eyes. They are people who seem like they are constantly being asked their opinion about everything, who have the sense that they are inherently of interest, intrinsically special."

No matter how many times the episode has played, it’s still hard not to cringe watching Michael Scott (Steve Carrell) propose to his girlfriend Carol (Nancy Walls) over a microphone at a Diwali party. Carol is dressed as a cheerleader because Michael told her Diwali was “Indian Halloween,” and when she asks if they can discuss the decision in private, a whole room of strangers is watching.

In situations like that,“The Office” took our most relatable fears — rejection, public humiliation, loneliness — laid them bare, and let us laugh at them. Full episodes, like “Diversity Day” or the infamous “Dinner Party,” episode suspended viewers for a half hour in a state of sheer secondhand embarrassment.

That makes the growth of the characters, and their respective wins, even sweeter. And as many of “The Office” stars have gone on to do very different things (notably Mindy Kaling, who went on to create and star in "The Mindy Project" and wrote some of her experiences in the writers' room into her new comedy “Late Night”; and John Krasinski, who's transitioned to action hero roles, including Amazon's latest incarnation of Jack Ryan), the show serves as a yearbook of sorts, allowing us to compare who they were then to now.

When “The Office” left television in 2013, critics agreed it was time, but acknowledged the show had a distinct place in the cultural canon. “Even though its later seasons never lived up to its groundbreaking early explorations of contemporary work culture,” wrote The Atlantic’s Kevin Craft. “What The Office leaves us with are memories of television comedy at its best.”

And judging by the reactions of its legions of devoted viewers, “The Office’s” impact has stood the test of time, as well as the shift to streaming. It remains to be seen if NBC’s play will, in fact, convince the show’s fans to follow it to a new platform.