"The Big Bang Theory" of evolution: The show honored smart misfits and let them grow

Over 12 seasons the blockbuster CBS sitcom thrived by embracing everyone while elevating intelligence, with heart 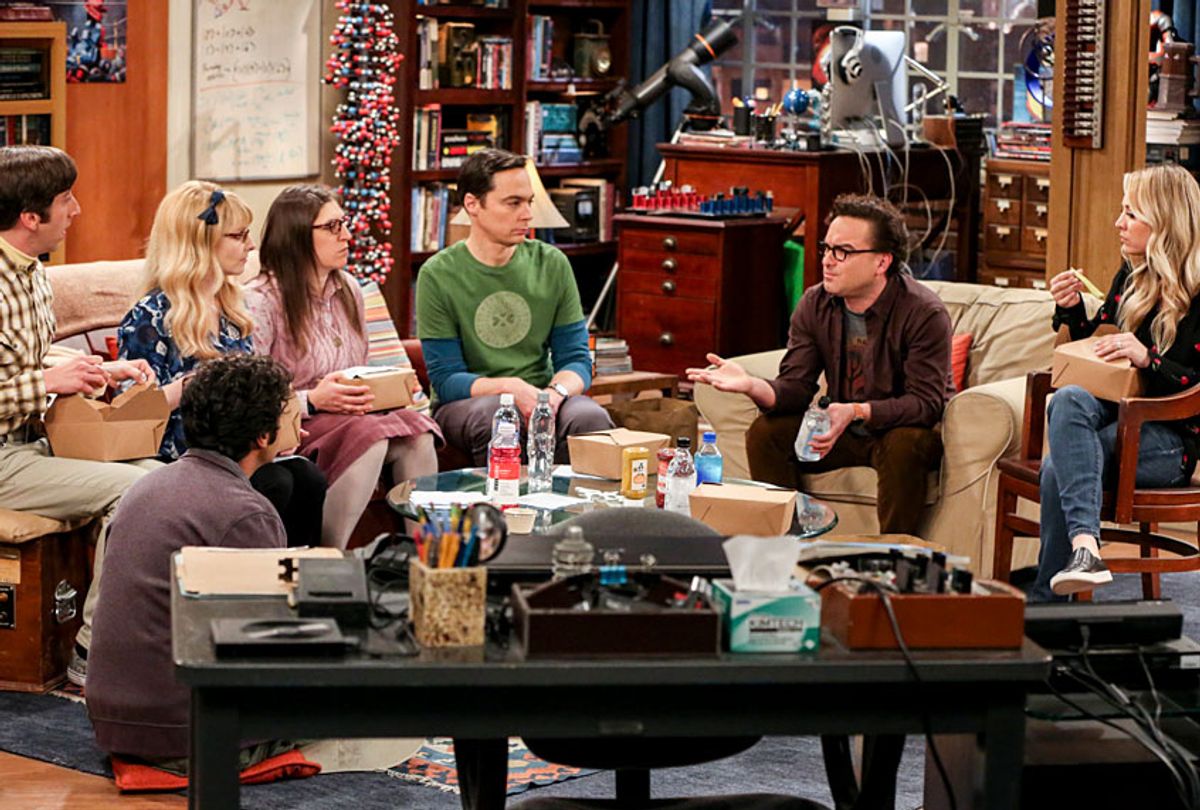 Nearly every saga’s origin story contains a detail about a central character’s dissatisfaction with the ordinary world’s working. Similar notes often appear in the prologues of scientific innovation or inventor profiles, interestingly enough. Both distill down to a simple thought: the world was missing something.

“The Big Bang Theory” origin story begins 2005 with co-creators Chuck Lorre and Bill Prady kicking around concepts at a kitchen table. In an interview for a story I wrote for Variety in 2016, Prady recalled that he was very unhappy at a job and decided to put together a pilot centered upon characters that, at the time, would be considered unconventional.

Although Lorre’s “Two and a Half Men” found success as broadcast’s most popular scripted comedy that season, the sitcom genre was struggling in 2005. Thematically speaking many of the series aped the classic family sitcom structure or sought to recapture the magic of “Friends.”  In contrast, Prady wanted to bring characters to television who resembled ones he knew in his previous career as a computer programmer, “really, really smart guys who sort of move through the world a little differently,” he said.

“One of the things is that kind of person was always portrayed homogeneously,” Prady told Salon and a several other reporters at a recent press event. “And the people who are different in this way, it's a very heterogeneous group.”

Like any winning formula, the ensemble that would eventually consist of roommates Sheldon Cooper (Jim Parsons) and Leonard Hofstadter (Johnny Galecki), co-dependent best friends Howard Wolowitz (Simon Helberg) and Raj Koothrappali (Kunal Nayyar), and the down-to-earth neighbor Penny (Kaley Cuoco) went through a trial and error period before the series finally hit the air in 2007 — just in time for the Writers Guild of America strike that halted to show’s freshman season.

And the series continued to make refinements, tweaking how Cuoco’s Penny was written in order to ennoble her real world intelligence, and eventually adding Melissa Rauch’s Bernadette and Mayim Bialik’s Amy Farrah Fowler to represent high-achieving women in science and academia. Neither Prady nor Lorre ever described any of these characters as nerds, or geeks or any other pejorative.

Twelve years and 11 more seasons after its debut season, “The Big Bang Theory” comes to an end on Thursday at 8 p.m. on CBS as the longest-running multi-camera series in history and the number one comedy in the world. Leonard and Penny have been married for several seasons, almost as long as Bernadette and Howard. Even Sheldon, whose extreme fastidiousness and abrasive grumpiness led to him becoming the series' breakout character, began as a guy who didn't like to be touched and ends it as a man who has learned to enjoy more than occasional acts of coitus with his match Amy.

A TV series’ overwhelming success doesn’t automatically necessitate paying homage to its departure, mind you. Many long-running TV series had their exits celebrated only to be forgotten soon after the last episode’s end credits are finished.

But “The Big Bang Theory” has always been a different proposition, which is why it’s bound to be kicking around in syndication for many years to come for reasons — affirming ones — beyond those having to do with savvy business contracts.

During seasons when networks frantically scoured the land for the working class comedy commonly thought to be absent from television, “Big Bang” continued to dominate by celebrating all outsiders, drawing comedy from awkwardness without making the awkward person the butt of the joke.  Its comedy transcends partisanship, evident in a recent poll that found it is the only broadcast series that’s popular among both Democrats and Republicans.

“One of the things the show does is it has respect for different points of view and respects individuality and difference,” Prady said.  “I mean, we don't know Sheldon's politics. But he once said, ‘When it comes to 'Star Wars,' I'm more of an Empire man.’ So where does he fit on the political spectrum? Where does Penny fit, where are these characters? We don't particularly know.”

“But,” Prady added, “we know that the arguments would be vociferous. And we know that somebody would say in one of those arguments, 'I agree with you but not for the reason you're saying.' So there would be disagreement among agreement.“

Simply put, it is a big tent series that celebrates intelligence, uniqueness and the vital importance of hard science in an era when scientific data and findings are constantly under attack, and it does all this without leaving anyone out of the conversation.

“I remember once there was a model who was here  — a well-known, famous supermodel,” Prady said.

“And she said, 'I relate to this show because this was me in high school.' And I'm looking at this supermodel saying, 'How can that be?' And she said, 'Well, I was this tall when I was 13 years old. No one ever asked me out. I didn't have friends. And I was different.' Then you go, oh, OK. Yeah, you're right. You are one of these people. You're one of our guys."

The rise of “The Big Bang Theory” coincided with nerd culture’s mainstreaming, having debuted a few years after the completion of the “Lord of the Rings” theatrical franchise completion but smack in the middle of the “Harry Potter” movie era.

Sheldon, Leonard, Howard and Raj are bigger comic book fans and Trekkies than anything else, and fortunately for them, the rest of the world was quickly catching up to match their passion. Lorre, Prady and fellow executive produces Steven Molaro and Steve Holland went one step further, however, and made rock stars of the science world into TV stars as well, placing the likes of the late Stephen Hawking, public radio science host Ira Flatow and astrophysicist George Smoot on the same celebrity level as the late Carrie Fisher, James Earl Jones, Nathan Fillion and a number of "Star Trek" stars, including William Shatner, LeVar Burton and the voice of the late Leonard Nimoy.

We also owe the series a debt of gratitude for featuring "Star Trek: The Next Generation" alum Wil Wheaton as Sheldon’s nemesis and reminding the world of how smart and funny he is.

Despite all this, “The Big Bang Theory” did not receive much critical acclaim when it first debuted, and aside from coverage about its ascent in the ratings in its early years and certain milestone events — like Sheldon and Amy losing their virginity with one another, the death of Wolowitz’s mother and the birth of Howard and Bernadette’s child — it is not a regular subject of extensive analysis.

Such is the case with reliable ratings hits that are solid, reliably funny and inoffensive, perfect for network prime time in general but not commonly viewed as innovative.

However, while a number of writers theorize “Game of Thrones” will be the last TV series viewers around the world watch together, the fact that so many people retain a more or less consistent and abiding affection for “The Big Bang Theory” is underappreciated.

Compared to the HBO saga’s much-chronicled character development shortcomings, “The Big Bang Theory” has by and large taken great pains to allow each friend and relationship to move forward without violating the qualities viewers know about and connect with in them.

To Lorre, the secret of the comedy’s success is in the way it shows “people caring for each other in different ways, and maybe not being so good at it. But I think affection underlies all these relationships, even the adversarial ones. There’s an affection that hopefully causes the audience to care.”

Early in the comedy’s existence, Prady and Lorre observed the audience’s unusual protectiveness toward Leonard, Sheldon, Howard and Raj, a sensitivity that also blankets Amy, Penny and even the abrasive Bernadette.

Thus it’s understandable that the writers have been laying the groundwork to leave viewers with a sense of stability as opposed to the standard “moving on” tactic. In recent episodes, for example, Leonard confronts his emotionally frigid mother (played by Christine Baranski) about her inability to show him support and affection and, surprisingly, they reach a poignant place of resolution — something that’s eluded this pair for most of the series.

Raj, the last of the group to find love, a man once stymied by selective mutism rendering him unable to speak in a woman’s presence, trades in desperation for wisdom in one of the series’ sweetest scenes, giving Raj the kind of love declaration he always dreamed of,  at an airport gate no less — by way of an unexpected source, albeit one that makes completely sense.

And appropriately, although the series ender teases a relationship-related development, the finale episode’s main question relates to career achievement, one that could mark the highest seal of approval on Sheldon and Amy’s professional collaboration.

No ensemble comedy that lasts longer than a decade could get away without featuring at least one wedding and a birth or two; “Big Bang” has given us a few of those, but grants as much significance, if not more, to its characters’ career leaps and the resultant tensions produced by those successes. When Wolowitz is selected for a space mission, or Leonard leaves Penny to spend months on a research vessel at sea, the writers thoughtfully and comedically wove the feelings of inadequacy, envy or anxiety into the scripts.

“Two and a Half Men” may have been Lorre’s first runaway network television success — like “The Big Bang Theory,” it also has a stage dedicated to it on the Warner Bros. Studios lot in Burbank — but the care and sensitivity with which the writers and producers developed Sheldon, Amy, Leonard, Penny, Raj, Howard, Bernadette and even poor dejected comic book shop owner Stuart (Kevin Sussman) has few parallels in the broadcast sitcom space.

When tracing the emotional development of Lorre’s oeuvre, “Big Bang” must be studied as the creator’s most significant place of metamorphosis. Without discovering the potency in treating human quirks with gentleness and respect, as the writers have through this sitcom’s characters, the profundity of “Mom” and the soulful heft of “The Kominsky Method” may not have manifested as brilliantly as they have.

A couple of months ago when Salon spoke with Prady and Lorre, neither had a plan for how the series would end — “I always personally liked those endings where you got the sense that you could come back and find those people kind of where they were,” Prady said at the time — but the episodes that have aired since then convey a sense that this show will land smoothly, in a way that seamlessly connects the end to the start. A brilliant formula for a successful syndicated afterlife, in other words.

What may keep it running strong many years from now, though, is something else. "I used to talk about the beginning of that Woody Allen movie where you see the two trains passing,” recalled Prady, referring to the film “Stardust Memories.”

“And he sees the other train, and he says, 'Life is like there's something going on and you don't know how to get there.' I’ve always felt that, and I felt that for these characters. And I think that turns out to be the human condition.”