Despite an uneven season, the series finale uplifts Black women to show magic isn't just the province of whiteness 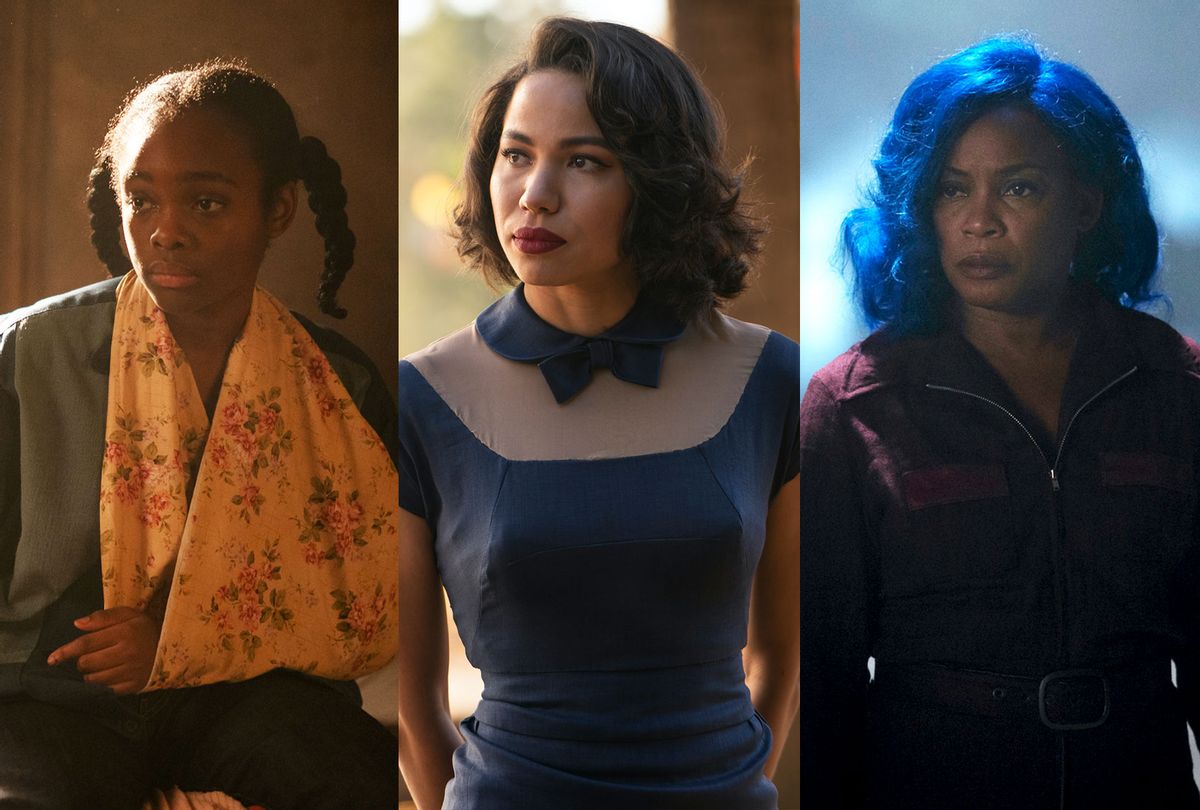 "Here's to girls like us who know when to create and when to destroy."

Looking back on the first season of "Lovecraft Country" from the finale, titled "Full Circle," that line speaks aloud the most solidly realized parts of an uneven if highly enjoyable and ambitious season. A background character speaks it in the seventh episode, "I Am," and later the credits identify her as Frida Kahlo.

Like so much of "Lovecraft Country" this is an example of series creator Misha Green folding history into fantasy to comment on the world as we know it: In "I Am" Aunjanue Ellis'  Hippolyta has willed herself into Josephine Baker's inner circle at the height of her fame in France, one stop on a self-realization odyssey taken through an interdimensional portal.

In her fantasy of roaring '20s Paris, Hippolyta reconnects with the sensuality and beauty that is her birthright before sliding into another place and time, where she trains to lead warrior women into battle against legions of white male attackers. After this, she rewrites her definition of what it means to be a wife to her late husband George (Courtney B. Vance).

She ends her sojourn by becoming a vision of the space adventurer her daughter Dee (Jada Harris) imagines her to be in the comic book she drew, a sapphire-haired character called Orynthia Blue. No single version of the women she embodies defines her – she encompasses all of them. In doing so she fulfills the assignment given to her by the galactic figure (cleverly named Beyond C'est, get it?) to name herself, claiming more power than she realized was possible in the life prescribed to her on Earth.

"Lovecraft Country" is the kind of show that compels the viewer to be patient with its flaws and to stick with it despite the pell-mell nature of a serialized arc – that is, if they opted to stick with it at all. Those who came to Green's latest series expecting a type of message-driven prestige drama were bound to be underwhelmed at what it actually is, which is a hybrid between serialized family drama and a horror anthology.

The standalone stories that served as puzzle pieces that snapped into the "Full Circle" endgame made up for the somewhat less compelling A-plot connecting the legacy of Atticus Freeman (Jonathan Majors) and his family with that of Christina Braithwaite (Abbey Lee), whose ancestors enslaved his. Episodes such as  "I Am" allow Green to take inspired swings utilizing classic genre tropes, be they horror based or sci-fi flavored, to spin fantasies centering Black characters that speak to what it means to be Black in the world without becoming polemical exercises.

But for all of the haphazard expositional expediency that bogs down the first season and its finale in particular, one consistent aspect of "Lovecraft Country" that pays off satisfyingly in "Full Circle" is Green's conscientious centering and uplift of women, and Black women specifically.

Matt Ruff's 2016 novel positions Tic's childhood friend and lover Leti as a fighter, traits that Jurnee Smollett takes on with gusto. Watching her swing her baseball bat in the third hour, "Holy Ghost," is a thing of beauty.

Green, however, alters aspects of the novel to create something new and more closely attuned to conversations we're having in 2020. Christina's character is male in Ruff's novel, for example; in the series she cloaks her self-serving aims in feminist advertising, seeking to persuade the Freeman family to help her achieve ultimate power by retrieving the pages of an all-powerful tome called the Book of Names and handing them over to her.

One of the season's major flaws was in failing to decisively establish why Tic, Leti and the rest of the Freemans would deign to help her other than the fact that she's studied a type magic all her life of which they've only recently been made aware. But then, they also conclude time and again that if she can learn it, so they can they – and through sheer determination Team Freeman consistently decodes puzzles and finds paths that have eluded Christina despite her many privileges, finding not just the Book of Names' missing pages but the full tome.

Dee, Hippolyta's daughter, is a boy in Ruff's book, where Hippolyta's cosmic side mission has nothing to do with discovering or claiming her power. No man, let alone a white one, could comprehend the essentiality of that quest for Black women. Nor could they effectively understand the urgency of Black women claiming their right to their anger, journeys that Leti, Hippolyta and Dee take separately, thereby preparing them for their final confrontation with Christina.

"Full Circle," written by Green and Ihuoma Ofordire, culminates all of these plots with varying degree of success. Leti now carries the Freeman family magic within her by way of being pregnant with her and Tic's son; Hippolyta has the power to travel between universes and obtain whatever knowledge they require; and Dee, who falls victim to a white cop's curse in the eighth episode, "Jig-a-Bobo," now has a robotic arm.

Most significantly, Leti informs Christina that she has used the Book of Names to bind all white people from using magic, making it the sole province of people of color . . . which, as author and four-time Hugo Award winner N.K. Jemisin has pointed out, is what H.P. Lovecraft feared most of all.

Reading this without seeing the stories that explain how these happen makes "Lovecraft Country" sounds absurd, which it is in the best sense while also frustrating anyone pining for some linearity of narrative that is, at the very least, solid.  But the success of this season is in the individual stories and the triumphs those hours yielded for their characters, both in those moments and in the finale.

It is marked by major deaths, mainly those of Ruby (Wunmi Mosaku), killed offscreen by Christina, and that of Atticus, who dies but leaves his magical legacy to Dee, Leti and Hippolyta, and charges his father Montrose (Michael Kenneth Williams) with being a better grandparent than he was a dad . . . perhaps by embracing his hidden identity as a gay man.

We also witness Christina's death at Dee's mechanical enhancement, and if you found it shocking that a show would feature a teenage girl ripping out a woman's throat in response for said woman begging for help, then you haven't been watching.

It's not simply that Christina represents a demonic sort of white entitlement; it's the matter of Dee being an adolescent who has recently seen the mutilated body of Emmett Till  – "Jig-a-Bobo" is framed around Till's funeral, which drew thousands – and who, midway through the finale, reads that Till's murderers will not see justice. Christina pleas for Dee to help her out of a belief that Dee is an innocent, kind teenage girl, willfully ignorant of the fact that Jim Crow America has robbed Dee of the luxury of viridity.

Tic's death was ordained since the first meeting between Christina, Tic, Leti and Montrose, in which her father tries to sacrifice him to attain immortality for himself and the white supremacist order of warlocks he led, the Sons of Adam. That part of the series plays its A-plot as a connect-the-dots fantasy map from the starting point to the finish without much in the way of surprise or deviation.

Although it fulfills its mission by gathering the floating threads from each individual story and weaving them into Christina's climactic spell recitation and bloody howl under a full moon, the expository devices used to patch storytelling holes are undeniably clunky.

Ji-Ah (Jamie Chung), Tic's fox demon lover from the Korean War, shows up in the United States an episode or two before the finale . . . for what reason? So that her demonic powers can counteract Christina's spells and neatly explain via a montage of flashes before our eyes how the shoggoth over which Tic has dominion suddenly is now under Dee's control, or how Leti survived a fall that appears to have killed her. A person would have had to watch closely to see that rapid-fire shower of plot-hole fillers, and even if people who did would have been justified to rate this move as sloppy.

Then again, for every unsatisfying "Lovecraft Country" snippet such as this, there are so many more hints at the possibilities subsequent seasons may yet reveal. The Freemans may hold the key to magic but they're still living in an era ruled by white supremacy's monstrosities, to say nothing of the fanged and tentacled demons all around them.

It is a different world in the television industry of 2020 than in seasons past, one in which a number of series that had renewed by networks have recently been canceled due to the pandemic's impact on productions and the economy. "Lovecraft Country" could very well be a one-and-done series if this plays into the considerations surrounding HBO's decision on its renewal. If that is the case, it should be hailed for its boldness more than its structural stumbles.

Chalk this season up as a journey of discovery, one with peaks and bumps and a few moments that went off track but found its way home nevertheless.

But the network might also consider that the series' producers have the chance to learn from the first season's missteps – a grace afforded to many genre showrunners before her, nearly all of whom are white and male. Green has an opportunity to build a world beyond that of Ruff's book and leaves its future yet to be born in the hands of this story's central women. This in itself offers so many fantastic opportunities.

After all, at the end of her search for enlightenment, Hippolyta wonders how could she could fit in everything that she has become into her old existence on Earth, knowing that there is so much more to be explored. "That Hippolyta," she says with calm wonder, "she was so small."

The entire first season of "Lovecraft Country" is available to stream on HBO Max.