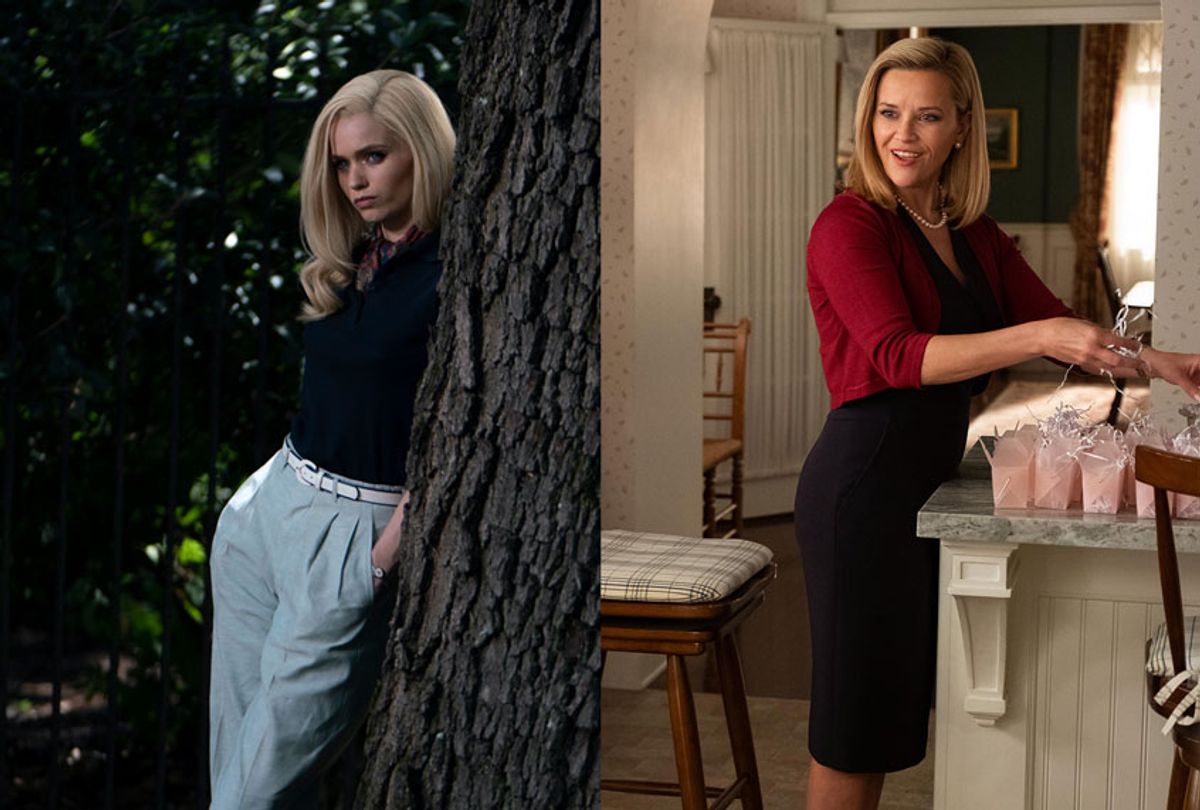 In the summer of 1955 14-year-old Emmett Till journeyed to Mississippi from Chicago to visit relatives when a white woman named Carolyn Bryant accused him of making a lewd pass at her. In reaction, local white men kidnapped him from his aunt and uncle's modest home, beat him and mutilated his body, shot him in the head, tied a 70-pound fan around his neck and tossed him into a local river. More than five decades later, Bryant reportedly admitted she fabricated much of the story that led to Till's murder.

The action in "Holy Ghost," the third episode of HBO's "Lovecraft Country," also takes place in 1955, which is when Jurnee Smollett's Letitia Lewis buys a rundown mansion with what she thinks is inherited money. Her new house is located in a white neighborhood populated with hostile forces, among the worst being the home's demonic inhabitant.

Leti survives all of it, much to the great irritation of her actual benefactor: Christina Braithwaite (Abbey Lee), daughter of the now-deceased leader of an all-white secret society dedicated to consolidating supernatural power. Christina is a polished player – blonde, eerily placid, used to getting her way. She purports to be purely feminist in her aims. All she wants to do, she tells the story's main hero Atticus Freeman (Jonathan Majors), is have her power and talent acknowledged in a legacy that's only granted respect and agency to men.

At the end of "Holy Ghost," Tic attempts to scare Christina out of his and Leti's lives by jamming a gun in her face. Tic is a powerfully built man, and a veteran of war. Christina doesn't blink. She paralyzes him with her sorcery, calmly lecturing him about her family's history and explaining why he should help her get what she wants: pages enabling her to translate the Book of Names, a spell book with the ability to give her ultimate power.

"Tic, really, you have to be smarter than this," Christina coos at the end of her miniature TED Talk, serenely strolling by him and out the door. "You know you can't just go around killing white women."

If there were a pageant for fictional women who represent the worst of America in 2020, Christina would be a top contender for the title of America's Next Top Karen.

Even Lee herself agrees with that assessment. "She's ultimate Karen," the actor behind Christina told Salon in a recent interview. "It's that privileged white woman playing Monopoly with the lives of this Black family, all the while doing it with this air of like, 'Oh, I'm not doing anything wrong. I'm not hurting them. I'm not using nasty terms.' All the while she's taking no accountability for it. She's claiming ignorance to it . . . which is the ultimate Karen move, right?"

"Lovecraft Country" festers with slimy monsters, malevolent ghosts and other supernatural entities, but on the verge of the series' fifth episode the deadliest threat may very well be Ms. Braithwaite. But wasn't that obvious from the first time we saw her? After all, this year has been a banner one for the real world's Karen brigade; why wouldn't a television series respond to this by producing an avatar who oppresses her victims without having to waste a breath?

Before we go any further we should touch upon what, or who, constitutes a Karen. As many actual, headline-grabbing women have demonstrated, Karens weaponize their whiteness -- and their tears -- in order to assert their dominance in any given situation involving interactions with Black people.

We're well aware of the recent all-star examples of Karen behavior: There was Amy Cooper, aka Central Park Karen, manufacturing a threat in a 911 phone call that could have resulted in a Black bird watcher being shot to death, for the simple crime of asking her to leash her dog, who was roaming in an area where no dogs were allowed.

There was Patricia McCloskey, the St. Louis woman who joined her husband on her front lawn in pointing their firearms at Black Lives Matter protesters marching by their house. There was Jillian Wuestenberg, filmed as she aimed her gun at a mother and daughter outside of a Detroit-area Chipotle.

All of them acted with full acknowledgment that their white womanhood grants them a level of impunity, and in the aftermath of terrorizing Black people going about their business, were given public platforms to argue that actually, they're the victims.

Those Karens and others we've come to know over the past nine months aren't fictional creations, making them infinitely scarier. But if part of television's service to history and culture is to render our sins in metaphor and project them back at us, then we should view what Ms. Braithwaite does with alarm.

And she's far from the only fictional Karen on TV. Remember Elena? Reese Witherspoon's nosy, accusatory, holier-than-thou suburban mom from hell in Hulu's "Little Fires Everywhere"? Kerry Washington scored an Emmy nomination for her performance in the series, and part of the reason for that were the many opportunities for Washington's character Mia to hold back explosions every time supposedly liberal Elena chastises Mia, a Black single mother, for pointing out Elena's toxic white privilege. How dare she!

For seven seasons "Orange Is the New Black" got audiences to invest in the stories of Black and Brown women in prison by luring them into the series by following another Karen named Piper (Taylor Schilling), a white upper-middle class woman who, in last year's finale, cheerily drove off to a semi-normal life with: "a clean sweep, clean living; a clean conscience."

Meanwhile a number of Piper's minority peers in prison ended up deported, slapped with heavier sentences and worse. Not Piper/Karen's problem – she's sweeping up a Starbucks now!

Hulu's "PEN15" serves up adolescent Karens in the form of Anna (Anna Konkle) and Maya's (Maya Erskine) rivals Heather (Anna Pniowsky) and Becca (Sami Rappaport), two of the most popular girls in school who are masters of middle school mean girl cruelty masked in kindness. Their names alone – Heather and Becca – announce them as predecessors to the Karens of today. (The fact that the characters are 13 in 2000 would put them at prime Karen age in 2020 if "PEN15" were to cook up a flashforward episode.)

Looking backward in TV history creates an endless list: Yvonne Strahovski's Serena Joy of "The Handmaid's Tale"? An authoritarian Karen who sells out her entire gender to live in the shadow of power.

Mary Crawley (Michelle Dockery) of "Downton Abbey"? Love her to death, but that lady's a Karen. Ditto for Jessica Lange's Constance Langdon on "American Horror Story" – only a Karen could be a grandmother to the anti-Christ. And there's reality star Kate Gosselin, who may not necessarily deserve the Karen label (discuss!) but has the unfortunate honor of being the poster model for the breed's signature "Let me speak to your manager" hairstyle.

But Christina Braithwaite is next level compared to most of these ladies because . . . hold on . . . she's a magical Karen. And she knows it, which makes her even more aggravating.  Manipulative in the extreme and full of advice for Leti and Tic, Christina's secret weapon is the fact that she appears to most who see her as refined, delicate and harmless.

"You should think about making some friends. Not all us white folks are out to get you," she purrs at Tic a few beats before her father tries to tear his soul out of him – which, she assures him in so many words, has nothing to do with her.

After deceiving Leti, she pulls a classic white feminist's move and feints at gender allyship: "Don't let the men fool you into thinking it's always about them," Christina tells her, right after a magical ward prevents her from strong-arming her way into Leti's home.

Lee puts it best: "It's like, 'I wasn't doing anything.' But they know what they're doing," she emphasizes of her character, and Karens in general. "She's a very sophisticated Karen."

What, then, could be her weak spot? Aren't we all asking that about the real Karens? Shame hasn't altered their behavior in public spaces or made them think twice about being filmed. For her display of lethal aggression against unarmed citizens exercising their First Amendment rights, McCloskey and her husband received the thanks of grateful nationalists by being invited to speak at last month's Republican convention.

In some fictional corners of the universe, at least, Karens receive their comeuppance; Elena loses her elegant home and her family's respect in "Little Fires Everywhere." In "Handmaid's Tale" Serena Joy is psychologically and emotionally diminished, and loses a finger for aiming too high in the patriarchy whose foundations she laid.

And Ms. Braithwaite? Her future is about as unclear as her true intentions, but history is as full of her like as the modern era, adding an extra level of sickening sinister to her most mundane actions and the terror resulting from them.

"She really is a gorgeous depiction of the oppressed becoming the oppressor, which is something I'm quite fascinated [by]," Lee adds. "It's universally a story that gets told over and over again, a really sick cycle that repeats." If it weren't based in something real, we might even dismiss her villainy as over the top. But many events past and present prove this isn't so, and compel us to watch her closely.