In an era of shift, Emmy voters do what they can to move with the times while also doing what they tend to do 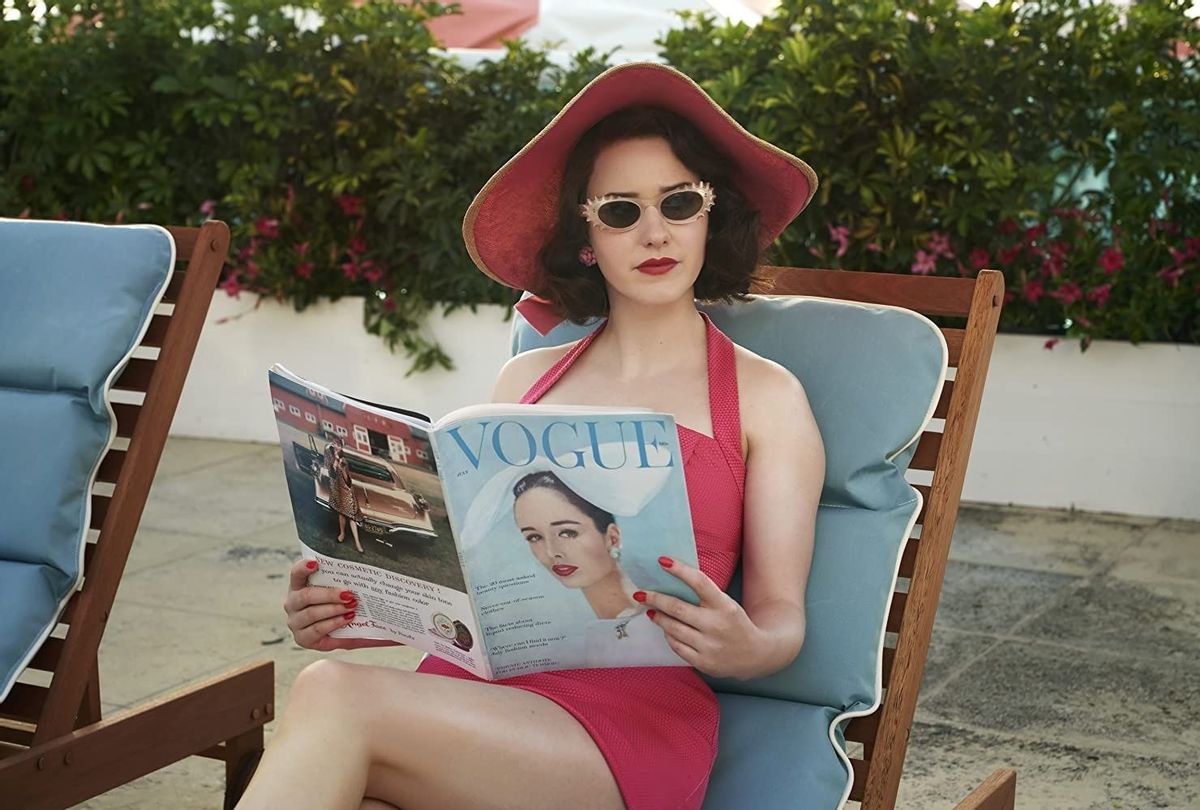 Long ago in a TV galaxy that feels far, far away, a few young sages observed, "When it's time to change, you've got to rearrange who you are and what you're gonna be."

Maybe this goes some way in explaining the nominations for the 72nd Emmy Awards, a batch that continues the institution's tradition of infuriating and bewildering people in some respects while delightfully surprising us in others.

This being the Emmys, the maddening elements prevailed Tuesday morning despite the praiseworthy choices reflecting Academy of Television Arts and Sciences voters' efforts to move with the times. Regardless of how many selections reflected the body's business as usual approach – "The Handmaid's Tale" for Outstanding Drama again? Seriously? – the sheer overwhelm of streaming service content made some shifts inevitable.

For example, although HBO traditionally has a strong showing in terms of overall nominations, holding the record for totals in 2019 with 137, this year Netflix shattered that total with a whopping 160 nods.

HBO still boasts holding the top slot among most nominated series with its 26 nominations for "Watchmen," with Amazon's "The Marvelous Mrs. Maisel," a classic example of an Emmy voter rubber-stamp selection, coming in second with 20.

Even so, this is also a year in which a "Star Wars" property claimed a spot in the running for Outstanding Drama alongside more traditional choices including HBO's "Succession," AMC's "Better Call Saul" and Netflix's "The Crown." The Disney+ space western "The Mandalorian" battled its way into those ranks while titles that otherwise might have been considered shoo-ins such as "This Is Us" and the Apple TV+ sleeper hit "The Morning Show" were denied entry.

Alongside "Maisel" in the Best Comedy category are HBO's "Insecure," whose creator and star Issa Rae and co-star Yvonne Orji received individual acting nominations, and to the delight of its many fans, "Schitt's Creek" raked in 15 nominations, including nominations for each of its principal cast members, including fan favorite Catherine O'Hara.

Not even that managed to be the category's dark horse. That honor goes to the nomination for FX's sheltering-in-place vampire comedy "What We Do In the Shadows."

The nomination for "Watchmen" is merely one exciting choice out of many in the best Limited Series category, possibly the race vibrating with the highest level of excitement of all the programs owing to the caliber of that drama's competition: it's going up against Hulu's "Little Fires Everywhere"; Netflix's "Unbelievable" and "Unorthodox," another Tuesday morning shocker (as is the nomination for "Unorthodox" star Shira Haas); and FX's "Mrs. America."

The flipside of this is the criminal failure to nominate "Unbelievable" stars Merritt Wever and Kaitlyn Dever for their moving performances, lending a bitter irony to the show's title. But as always, these snubs place the actors in fine quality company alongside the likes of "Better Call Saul" stars Bob Odenkirk, Rhea Seehorn, and Jonathan Banks, none of whom were nominated despite the Best Drama nod for the series.

Emmy voters once again – again! – left FX's "Better Things" out of the top comedy category and passed over its creator Pamela Adlon for directing and individual performance. Or it did the opposite, nominating "Ramy" creator and star Ramy Youssef for Best Actor in a Comedy Series while passing over the series for Outstanding Comedy. Meanwhile, Netflix's "The Kominsky Method" gained nods in that category as well as tapping series stars Michael Douglas and Alan Arkin for the Best Actor and Best Supporting Actor.

And while Emmy voters showed their willingness to roll with the publicly declared intention to enact change within the industry, one could almost hear the award creak of the voting body's changing voice as it struggled to hit the right notes, and the screech of failing nevertheless to be in tune with the public (and, good Lord, census trends) even as TV academy voters met some hopes and aspirations while missing others. Here are a trio of missed opportunities worth pondering.

The evident struggle to adequately grapple with inclusion

This year Emmy nominations voting took place July 2-13 –  weeks after the murder of George Floyd ignited protests around the world and launched the Black Lives Matter movement into the mainstream.

Between this and Donald Trump's original plan to host a rally in Tulsa, Oklahoma, the site of the 1921 massacre where that city's white citizens murdered hundreds of Black people and displaced thousands in the burning of Black Wall Street – and the event that opened "Watchmen" – suddenly there was renewed interest in Damon Lindelof's take on Alan Moore's and and Dave Gibbons' seminal graphic novel.

That series' 26 nominations-strong show is only part of a nominations roster that includes extensive acknowledgment of Black actors and creators, including but not limited to Don Cheadle for Showtime's "Black Monday," Tracee Ellis Ross and Anthony Anderson for "Black-ish," Kerry Washington in "Little Fires Everywhere," Sterling K. Brown for "This Is Us," Thandie Newton for "Westworld," Uzo Aduba for "Mrs. America" and in a surprise that shocked and delighted countless viewers, but nominations announcer Leslie Jones most of all, Zendaya for "Euphoria." Giancarlo Esposito's "Better Call Saul" co-stars may have been denied nods, but he received two nominations for that show and for his guest star turn in "The Mandalorian."

To anyone rooting for everybody Black, this may feels like a coup. Look at the representations of Asian actors on this list, and you've got Sandra Oh in the running for Best Actress and . . . um . . . yeah. How about Latinx representation? Well, in a year in which voters could choose from performances on "Vida," a variety of moving work on the finale season of "Orange Is the New Black" and had the opportunity to give Rita Moreno props for her work on "One Day at a Time," the sole Latina to make the nominations list is . . . Alexis Bledel from "The Handmaid's Tale."

Laverne Cox earned a nomination for her work in the last "OITNB" season which is wonderful. However, it is aggravating that voters didn't see fit to honor the work of MJ Rodriguez or Indya Moore in "Pose," which turned out its most poignant season yet.

We're all trying to figure out what it means to live in an era of Too Much Television, and it's clear that Emmy is doing its best to accommodate the swell of more and better TV and performances in the major categories.

Having said that, if an awards body is going to have eight slots for individual performers in the Drama and Comedy categories, it makes little to no sense to limit the actor and actress races in Limited Series to five, particularly in an era where that format is gaining in popularity and improving in quality. The same is true for Variety Sketch, which fortunately acknowledges the superior freshness of "A Black Lady Sketch Show," which joins frequent winner "Saturday Night Live" and "Drunk History" in that race, and which easily could have accommodated IFC's "Sherman's Showcase" and "The Iliza Shlesinger Sketch Show." Alas, for some reason, there can only be three here. (May the odds be ever in "A Black Lady Sketch Show"'s favor.)

I'll grant you, Emmy has been much, much worse in terms of rounding up the usual suspects year after year, and I would even say that some of this year's "snubs" evince the body's middling efforts to look further afield to uplift selections to which in past years it would have been blind. Elisabeth Moss didn't get a Best Actress nomination for "Handmaid's," and I'm fine with that. "RuPaul's Drag Race" received 10 nominations, which I'm also fine with because two very deserving reality series, "Top Chef" and "Nailed It," also have a presence in the reality category.

HGTV's "A Very Brady Renovation" received an Unstructured Reality nod, because nostalgia is a gentle drug. "Tiger King" got six nominations, tying it with "Cheer." Somehow bite-sized streaming service Quibi woke up Tuesday morning to 10 nominations. Make of that what you will.

Zendaya's nod is a terrific example of this and an even more inspired choice than "The Mandalorian" which, though a pleasant surprise feels somewhat more expected in a post-"Game of Thrones" universe.

Even so, looking at the Variety Talk category I can't help wondering if voters have ever watched Showtime's "Desus & Mero" or truly appreciate how much better "Late Night with Seth Meyers" is than, oh let's just say it, "Jimmy Kimmel Live!"

Kimmel is hosting this year's Emmy awards telecast but that shouldn't factor into the nominations process and in full honesty, I like his series. But he's a frequent flyer here, and Meyers is taking on topical humor with similar verve to what fellow nominees Trevor Noah, Samantha Bee, John Oliver and Stephen Colbert are dishing out. His and Desus and Mero's absence here are a major source of frustration.

Emmy, like America, is going through its awkward phase of figuring out how to let go of past tendencies to fight the tide and moving into the future instead. These nominations may have been a mixed bag, but at least there were a few interesting choices serving as counterweights to the usual irritations. A more accurate reading of how serious voters are about acknowledging the cultural shifts that are upon us and the true greatness of the medium won't be available for a couple of more months – more than enough time for minds to change and possibly revert to old habits.

The 72nd Primetime Emmy Awards will be telecast Sunday, Sept. 20 on ABC. For For more, check out Salon's full list of Emmy nominees.