"What We Do In the Shadows" was a vampire comedy. Now it's a feel-good show about quarantine life

Sick of being inside yet? FX's loopy vampire comedy is there for you, taking on a different purpose in Season 2 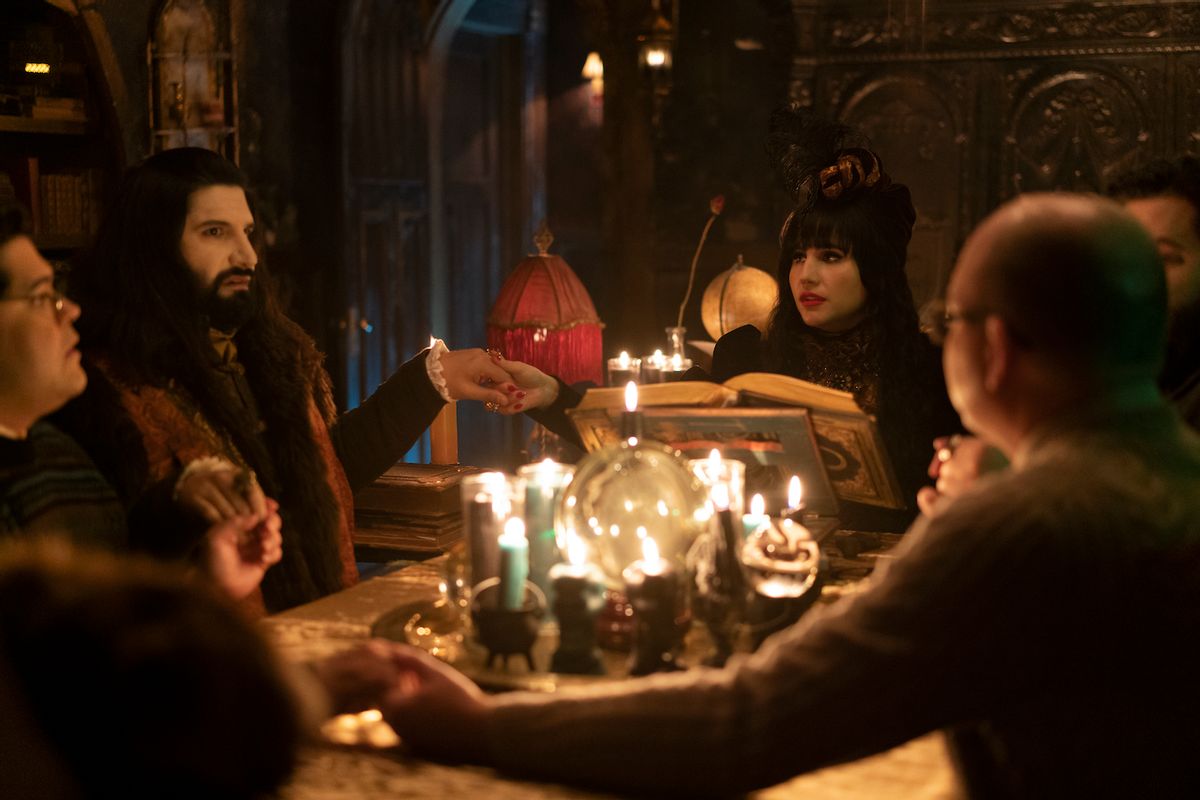 Various versions of the "pick your quarantine" house game have been circulating on social media for a couple of weeks now. They're the new version of the desert island list whose fantasy is predicated not on a choice of essentials or entertainment but on who your fellow castaways are. Thus, their appeal is understandable. You may love your family. Your may have the best housemates in the world. Rest assured, the time will come that you wish they would get out of your face.

This is where the usefulness of "What We Do In the Shadows" comes into play. The second season of FX's vampire comedy, based on a loopy 2015 indie by Taika Waititi and Jemaine Clement, debuted April 15 with two episodes that are useful as tools of commiseration and visual examples of bad shut-in behavior. One is a warning about letting the wrong one in. (Seriously, no good can come of inviting over strange house guests right now.) The other deals with an infestation . . . of ghosts.

Nandor the Relentless (Kayvan Novak), Laszlo (Matt Berry), his "lady wife" Nadja (Natasia Demetriou) and energy vampire Colin Robinson (Mark Proksch) have occupied their crumbling Staten Island manse for centuries, generally opting out of the modern world. One glance at the home's interior – the shabby upholstery, the dusty flocked wallpaper – hints that the place probably smells like a combination of black mold and armpits.

The house itself isn't the issue. It's the company. The vampire trio shatters the image of the fanged undead as seductive, all powerful, cool-headed beings. No, these three nag one another, bare their pointy teeth at the smallest slights, and generally glide through every waking moment in some state of irritation with each other.

Nandor, a ruthless conqueror of nations when he was alive, is now a stickler for household etiquette. The pompous Laszlo passes the decades by indulging in ludicrous pursuits such as sculpting the garden's topiary to commemorate the vaginas of the women he loves, or starring in terrible vampire porn. Nadja sneaks about and enjoys her own secrets, and in the new season she picks up a snarky possessed doll who becomes her newest companion.  The only roommate with a somewhat normal existence is Colin, a day-walker who feeds off of the soul slump he creates by reeling his victims into dull conversations. He loves working in an office.

For the most part they leave the procurement of sustenance and other grunt work up to Nandor's familiar Guillermo (Harvey Guillén), who readily accepts their casual abuse because he's holding out for the day that his master makes him into a vampire.

Since Guillermo is the house's personal TaskRabbit and BiteSquad wrapped up in one pudgy and devoted package, that day will never come. No matter; since he also has vampire hunting in his lineage – which, unbeknownst to the roommates, also makes him their personal security force – he may be forced to find a new job at some point anyway.

While the coven could expand its social sphere its natural fallback is to social distance together. The devils you know are always better than the ones you don't. Plus, each knows where the others sleep.

Proksch's portrayal of Colin Robinson has always been the secret weapon of "What We Do In the Shadows." What we couldn't have predicted is that circumstances would come about that threaten to transform many people into Colin Robinsons regardless of whether they want to be. As much as you may be hiding your vexation with the people around you, don't kid yourself – something you're doing is irking the life out of those closest to you.

In these new episodes the "Shadows" crew has contended with a useless party bro (Played by Haley Joel Osment) who becomes a household hazard, and a sanitary concern created by excessive ectoplasm.

Neither problem is real. And that may be why, in some mildly perverse way, one might enjoy pining for the types of concerns that obsess these creatures of the night. Who wouldn't take the mild annoyance of dealing with spirit goop over the nervous mania of recalling the last time we washed our hands or bleached high-touch areas? Slime is easy. Slime, we can deal with.

The problem these days is other people. But on some level hasn't this always been the case? Not long ago when many of us had the chance to go somewhere, we either declined or were relieved when those plans canceled.  We never miss anything so much as when it's no longer an option.

But even in this respect, the show successfully reminds us that there was a reason we chose our couches over our friends. Nandor, Nadja, and Laszlo still attempt to expand their social circles in this new season; in an upcoming episode, for instance, they accept an invite to a neighbor's home that they misinterpret to be a celebration of a "Superb Owl." Naturally their effort to try something different only brings them trouble. Socializing rarely yields much in the way of good on this series, actually.

Even if the world weren't ground to a standstill with millions of people locked in their houses, "Shadows" is far and away one of the funnier comedies on television because of its dead-center skewering of the mystique surrounding vampires. No second of each episode's agile twenty-something minutes is wasted.

At present, though, this comedy serves a mission higher than distraction or escape. It reminds us that aggravating though it may be to be stuck inside, better to be quarantined with those you've vowed to tolerate than ride out what seems like an eternity of boredom alone.

New episodes of "What We Do In the Shadow" debut Wednesdays at 10 p.m. on FX, and drop the next day on FX on Hulu.

Fx Hulu Review Tv What We Do In The Shadows