Smart Watch: "What We Do In the Shadows" is a comedy with bite

Deck the halls with creepy paper for FX's new show, plus "Into the Badlands" and Mark Hamill's "Knightfall" debut 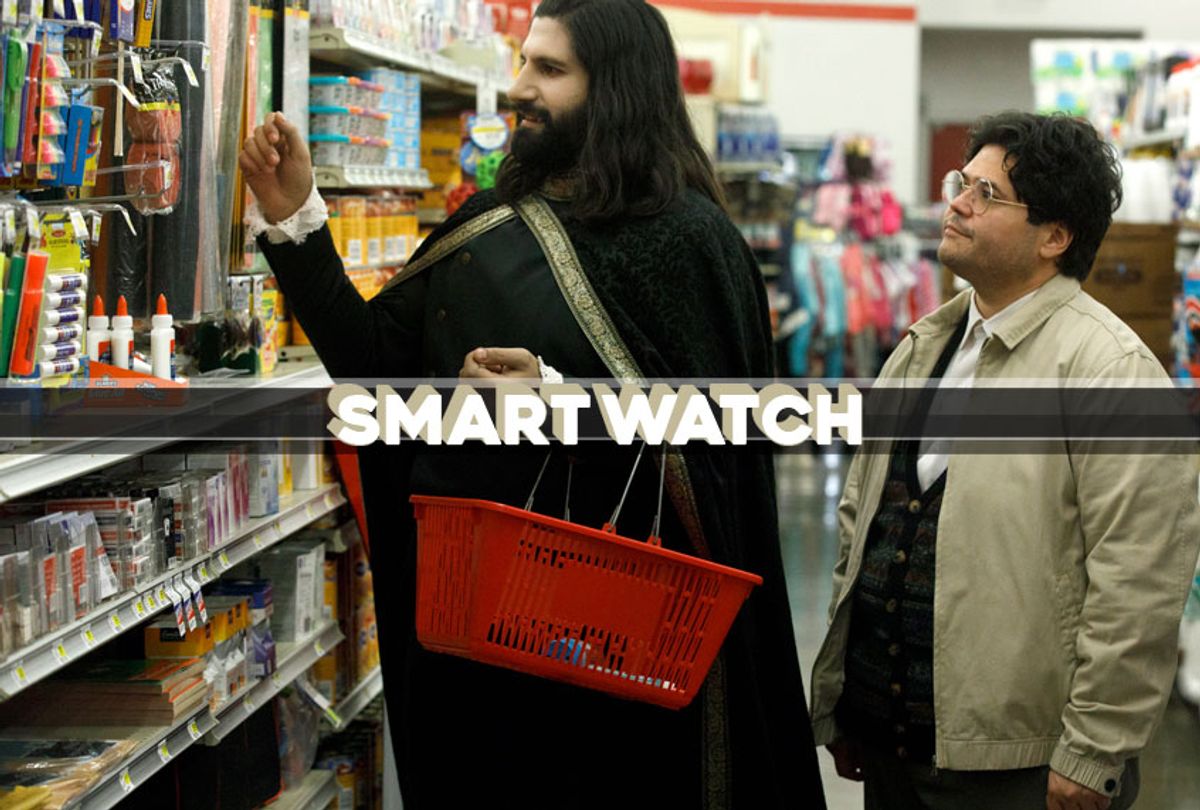 Vampires are no longer, shall we say, on trend. This is the TV season of the witch, in case you haven't noticed: Within the first seven days of April, viewers will witness the return of "Chilling Adventures of Sabrina" on Netflix, and the linear television debut of "A Discovery of Witches" on BBC America and AMC. The CW revived "Charmed," and last fall "American Horror Story" call upon a clutch of spell-casters to save humanity.

Sure, witches are the hot thing. But the vampire roomies on "What We Do in the Shadows" are easily the sharpest coven to see the light of prime time in many a moon, and the F/X series even manages to be funnier than the movie upon which it was based.

No shade on Jemaine Clement and Taika Waititi, who starred in the film and serve as executive producers on the series. But the truly odd flock that is the Staten Island-based Nandor the Relentless (Kayvan Novak), a British dandy vamp Lazlo (Matt Berry) and his vampire bride Nadja (Natasia Demetriou) makes each half-hour visitation a welcome and daft escape into a farcical corner of undead existence from which there is no escape.

Like the movie, "What We Do In the Shadows" lampoons the most nonsensical elements of vampire mystique by exploiting the TV mockumentary format, resulting in parody that feels ageless, at least in the four episodes provided for review. Several arcs are softly established in the premiere, but none feels as dominant as the mirth derived from watching these unfocused vampires drive each other to the brink of madness over petty matters. Nandor insists on maintaining old European traditions and manners, unnecessary graces Nadja and Lazlo got over eons ago.

But Nadja has her own secrets apart from Lazlo, who passes his endless amount of time on Earth by indulging in such random pastimes as racy topiary.

As a group these vamps, currently assisted by Nandor's long-suffering familiar Guillermo (Harvey Guillén), haven't expanded their ambitions much farther than where they planted their coffins upon arriving in the New World hundreds of years ago. They're the clueless slackers of the supernatural realm, so inept that even when they're given a quest to take over America, they can barely handle New York's public transportation system.

This isn't the case with all creatures of the night in the show's version of New York. The trio eventually crosses paths with a Manhattan vamp clan that runs the underworld scene pretty much as one would expect of intelligent creatures of the night, ruling their nightclub with the appropriate amount of organization. They also have a werewolf problem, in that werewolves are kind of aggressive and overly sensitive.

In this portrayal vampires are not seductive or even outsized in their power but dingy beings trapped in dim lighting who can't keep up with the maintenance of their ancient home. In fact, the most dangerous of their kind is an energy vampire named Colin Robinson (Mark Proksch, the comedy's secret weapon). Adding Colin to this universe was a masterstroke on the part of Clement, who created the 10-episode series for FX. Our lives are lousy with Colin Robinsons, so-called "day-walkers" who can transform a simple "good morning" into draining excursions from which we cannot escape.

The cast sells every moment beautifully. Demetriou's vacillation between annoyed den mother and over-the-top temptress provides a wonderful balance to Berry's consistently melodramatic Lazlo, who takes bestial form by bellowing out, "baaaaAAAAT" even though this is obviously a highly unnecessary flourish..

Novak's bumbling, eccentric Nandor is more reminiscent of Bronson Pinchot's "Perfect Strangers" character Balki Bartokomous than Vlad the Impaler, which belies a declared history of conquest and pillaging. This only augments the joke of the alleged relentlessness with which he laid waste to his medieval fiefdom. In this household Nando's only relevant to Guillermo, who Guillén imbues with every bit of passivity a human can muster without collapsing in on himself.

"What We Do in the Shadows" is a ray of light relief in an enervating era due to its cast's unwavering commitment to the joke of eternal life, showing this fantasy not as a sensual wonder but a glue trap of irrelevancy, down to the outdated clothing caked in dust.  The witching hour still abides elsewhere in TV, but even so this comedy draws you into its thrall from the very first episode.  From there it pulsates with such an oddball sweetness that every new episode invites the unsuspecting viewer further into its moth-eaten gothic shenanigans.

Television contains many versions of how existence is going to crap and the difficulties those who survive the initial descent will inevitably face. But only one of them actually makes the apocalypse as we know it look impeccably tailored. And that's, well, something.

Sartorial supremacy isn't the main reason to watch "Into the Badlands," of course. What hooks a person is the balletic ass-kicking.

The basic premise is that in what remains of civilization 500 years from now, society is divided into hierarchies run by barons and powered by "cogs," or slaves. Part of the servant class is an army of enforcers that go by different names; the one played by star and executive producer Daniel Wu is a "clipper" named Sunny.

Much of the series follows Sunny's adventures to escape the barbarous fiefdoms keeping him and others like him under heel, but in these final episodes he's drawn back into conflict with powerful enemies, including a top baron known as The Widow (Emily Beecham).

The cinematography, costumes and overall style of "Into the Badlands" are mesmerizing. AMC's other post-apocalyptic series may get the majority of the ink and viewers, but Alfred Gough and Miles Millar's acrobatic spectacle, led by Wu, deserves a lot more attention than it's gotten over the two and a half seasons that it's been on the air.

"Into the Badlands" is the only show of its kind on American television that employs Hong Kong-style wire work, choreographed by Master DeeDee, who worked on such films as "Kill Bill Vol. 1 & 2" and "Crouching Tiger Hidden Dragon."

And it's not merely fighting for the sake of thrilling the viewer. The face-offs are part of the storytelling, amplifying the stakes. Better still, this is a narrative that allows its female characters to be as powerful, politically savvy and ruthless as their male counterparts, and central to the action as opposed to part of the prizes being fought over. In fact, at this point in the story the women are the strongest rulers left standing.

The series ends after this run of episodes, which resume on Sunday . That's sad in some respects but, in another sense, allows the shows' creators to bring the series to a worthy end as opposed to forcing it to shamble onward long past relevance. Most viewers will likely discover it after production has ceased, and that will have to do. But at the very least it's a story beautifully told that received three seasons' worth of air.

In contrast to the definitive fantasy of "Badlands" this second season of the adventures of the Knights Templar aspires to hold the weight of history but, unfortunately, makes it about as realistic and epic as a well-executed Renaissance faire. For a number of viewers, that's sufficient. "Vikings" ended its season a while ago, getting through the next few weeks until "Game of Thrones" returns might otherwise be tough for fans of sword-swinging heroics.

Ordinarily I would have let the second season of "Knightfall" pass without mention, but for its second season "Knightfall" has brought on Mark Hamill as Talus, a veteran of the Crusades freshly sprung from a decade of captivity in the Holy Land. Bearded and scarred, he must now train new initiates into the Order. Which, I mean, sounds pretty familiar, right?

In lieu of LARPing, this series seems like a decent way to watch what Luke Skywalker can do with a sword that doesn't glow. Plus, Hamill lends additional profundity to a show that's essentially built around Tom Cullen's Landry, a man on a redemption track and still the series' all-around hot dude.

The first season of "Knightfall" may lack the binge-worthy qualities that made "Vikings" an essential part of an action-lover's hygge routine, but Hamill's hire provides enough temptation for a person to peek in on this second go to see what he can do to elevate the story. It's enough of a joy to watch him working, even if one ultimately decides this series does not.