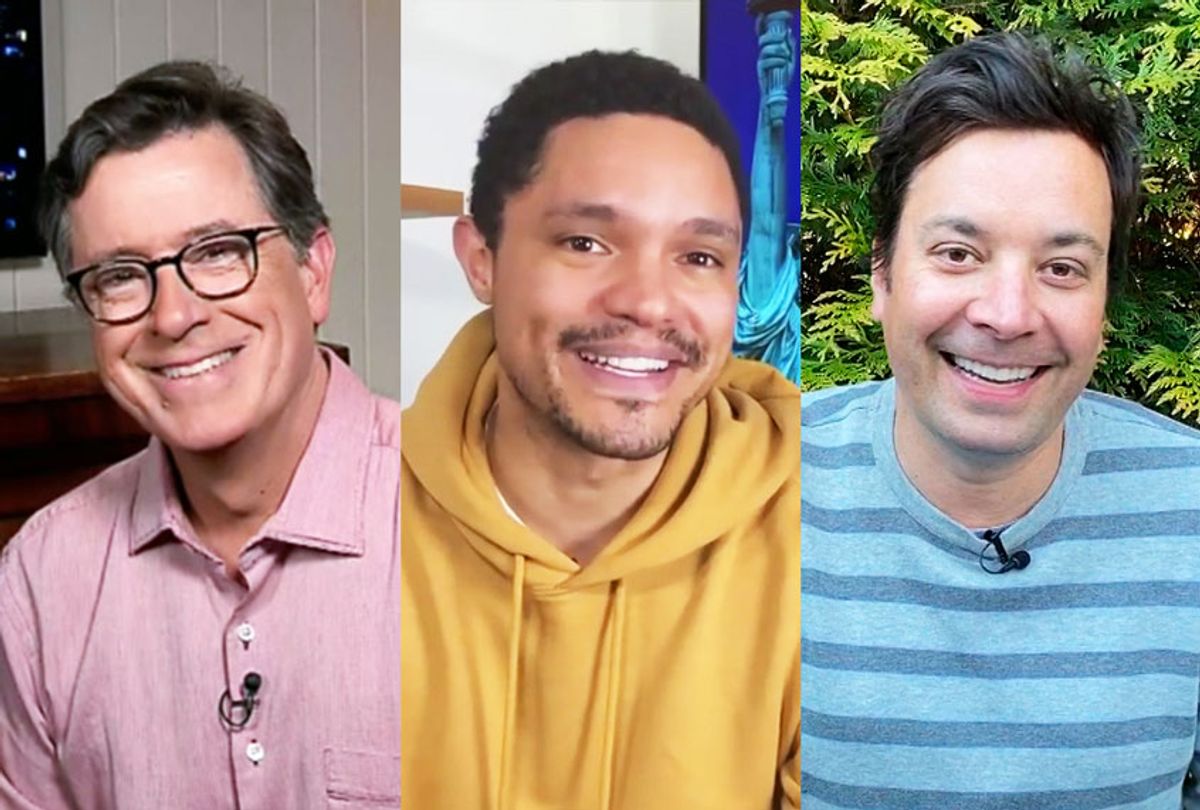 Late night fans of a certain age likely relaxed into a nostalgic swoon at seeing "The Daily Show" host emeritus Jon Stewart making the rounds over the last couple of weeks. He's been back in circulation to promote his new film "Irresistible," but its release is nearly beside the point even if, obviously, Stewart would very much like us to watch it.

Instead, what his latest tour offers is a flash from an old familiar light house, confirmation that the presence so many leaned upon during a previous decade's darkest hours still walks among us like Gandalf the Grey.

Even so I can't rightly say that Stewart has been that sorely missed or that we were all that desperate to hear from him. Functionally speaking, the Jon Stewart worldview has never left us: the brand of probing skepticism he honed to a needle's point on "The Daily Show" is being carried forward by its alumnus Stephen Colbert, Samantha Bee, John Oliver, Hasan Minhaj and Stewart's successor Trevor Noah.

This is not news. But it does confirm that, as Stewart put it in his recent New York Times interview, "The Daily Show"'s role as a critique of both the news and systems, generally, is serving viewers better in this moment than other varieties of topical comedy. And no scenario has made this more apparent than the acceleration of support for Black Lives Matter that has occurred in the midst of this pandemic.

In the weeks since the killing of George Floyd in Minneapolis, Noah has become the de facto source for breaking down the Black experience in the United States. This began with his cogent explanation of the "social contract" that America failed to keep with its Black citizens has elegantly evolved since then to not only discuss police brutality and explain the "defund or abolish" movements, but to also dedicated segments explaining aspects of racism non-white Americans deal with so frequently as to make them invisible to white Americans.

Oliver's weekly deep dives on HBO's "Last Week Tonight" carry forth what he's always done, only now they are more impassioned, more furious and frustrated, and crystal clear in the expositions of subjects such as the histories of policing and voting by mail, and the dangers of facial recognition – all topics that disproportionately target minorities while also in a real way adversely endangering the privacy and safety of white Americans as well.

Colbert, something of the elder statesman of this group, quickly found a balance on CBS' "Late Show" between conversing with experts, politicians and entertainers about our government's utter ineptitude and heartlessness in the face of the pandemic and the mainstreaming of support for racial equality and against police brutality. On Monday of last week he giggled with his fellow CBS host James Corden; on Tuesday he slapped John Bolton around for kicks.

Meanwhile on Netflix Hasan Minhaj, the host of "Patriot Act," made an impassioned plea to Asian Americans to step up and support Black people, specifically calling upon Minnesota Attorney General Keith Ellison, a fellow Muslim, to press criminal charges against Derek Chauvin and the three other former Minneapolis police officers for their roles Floyd's killing. It turns out Ellison was watching, and sat down for an interview with Minhaj that went live on YouTube on Friday.

If America were only contending with the rampant spread of the novel coronavirus that causes COVID-19, all things would be more or less equal in late night. Every late night host on each major network smoothly transitioned from live studio telecasts to "social distancing" editions. Starting March 16, Noah skillfully rebranded his telecasts from his New York apartment to reflect this new reality, around the same time that Colbert began calling his at-home episodes "A Late Show" (vs. "The Late Show"). Bee is coming to us from the safety of her vacation home in the woods prompting the cheeky subtitle "Little Show in the Big Woods," and Oliver from a pared-down studio he jokingly refers to as a white void.

Even hosts from the "Saturday Night Live" school of comedy, including "Late Night" host Seth Meyers, who's made a running joke out of taping his show in his attic, and "Tonight Show" host Jimmy Fallon, whose colorfully shabby chic surroundings at his rehabbed New York farmhouse augment his dedicated focus on fun and escapism, are making it work.

ABC's Jimmy Kimmel recently left on his summer hiatus but has more or less been muddling through.

Each host, in his or her own way, has kept audiences tuning in. Fallon's insistent light focus actually played in his favor in the first few weeks of the stay-at-home orders keeping much of the population indoors , and regardless of how a person might have felt about him before, it's tough not to be charmed at the sight of the guy disappearing down a slide with his daughters at the close of each "Tonight Show" episode.

But only the hosts and series with roots in breaking down the news have managed to make their roles in late night specifically and the popular culture of the moment feel necessary. When Fallon does touch upon issues relevant to Black Lives Matter or relating to race, he does so within the familiar framework of hanging out with celebrities, one of the most recent being Shaquille O'Neal. In large part "The Tonight Show" operates the same as it always has, with Fallon giggling along with his celebrity friends or showcasing his kids or his dog.

There is value in having a place to escape and feeling, in some way, that you're part of a friendly and personal conversation between two very famous people who are friends or simply very skilled in looking like they know and like each other. Such escape hatches are plentiful these days, however. In a recent episode Fallon announced that he's joined TikTok, and the word that came to mind was redundant; if "The Tonight Show" functions as a pre-slumber time-killer, bite-sized versions would not seem to offer anything more nutritional than the full serving.

"Late Night with Seth Meyers," meanwhile, yet again proves the host's acuity with processing the news. If Fallon is an unapologetically "dad joke" sort of comedian, Meyers is the dad with a wry sense of humor who is still invested in having pointed conversations with fellow adults tired of being surrounded by toddlers.

Like Noah, Meyers throws topics to his staff knowing they can personalize frustrations over, say, microaggressions or gaslighting in ways for which he is not equipped. At the end of a woe-filled day, few segments made aggravating developments more palatable than ones broken down by "Late Night" writer Amber Ruffin or, on "The Daily Show," Dulcé Sloan or Roy Wood Jr.

And they serve the purpose the average person of color is not obligated to, which is to explain how systems work to oppress minorities and the poor or, in Minhaj's case with his 11-minute wake-up call to fellow Asians, make connections between one group's history of being oppressed with Black Americans' struggle for civil rights.

This job should not have to fall to late night comedy. In a better world we would have a news media that was equipped and able to break through the barrage of lies and concisely and coherent explain the source of various manipulations and how they adversely effect all of us.

Then again, in a better world we would have an education system dedicated to raising a politically engaged public and teaching children critical thinking skills. We would have an audience that watched the news to glean accurate information, regardless of how bad the day's news might be or whether it squares with their feelings.

Since it does fall to these topical variety talk shows and these hosts, the audience that desires to understand systems, how they work, and how they are aligned against segments of us can take heart in being ably accommodated by "The Daily Show" and the men and women continuing its legacy.

This is not to completely devalue the old-school "Tonight Show" model of changing the channel and tuning out the negative. Everyone needs a break, and powering off the brain's worry centers before bed is downright healthy.

But so is taking in the late night host's explanations of  the sources of our discontent, the how and why of them, granting us some comforting clarity in all this fog or, in the case of Colbert's razor-sharp sparring matches with officials, putting the folly of the powerful on display for all to see. It is absurd to think that a bunch of comedians are tasked with lighting the path for so many of us, with helping us laugh through our rage and keeping us engaged. But these are absurd times – and who better to assist us in both understanding and coping with them?