From Sharon Stone in "Ratched" to "My Octopus Teacher," here's what's coming to Netflix in September

Also, be sure to take a weekend and binge the original "Jurassic Park" trilogy before it leaves the service 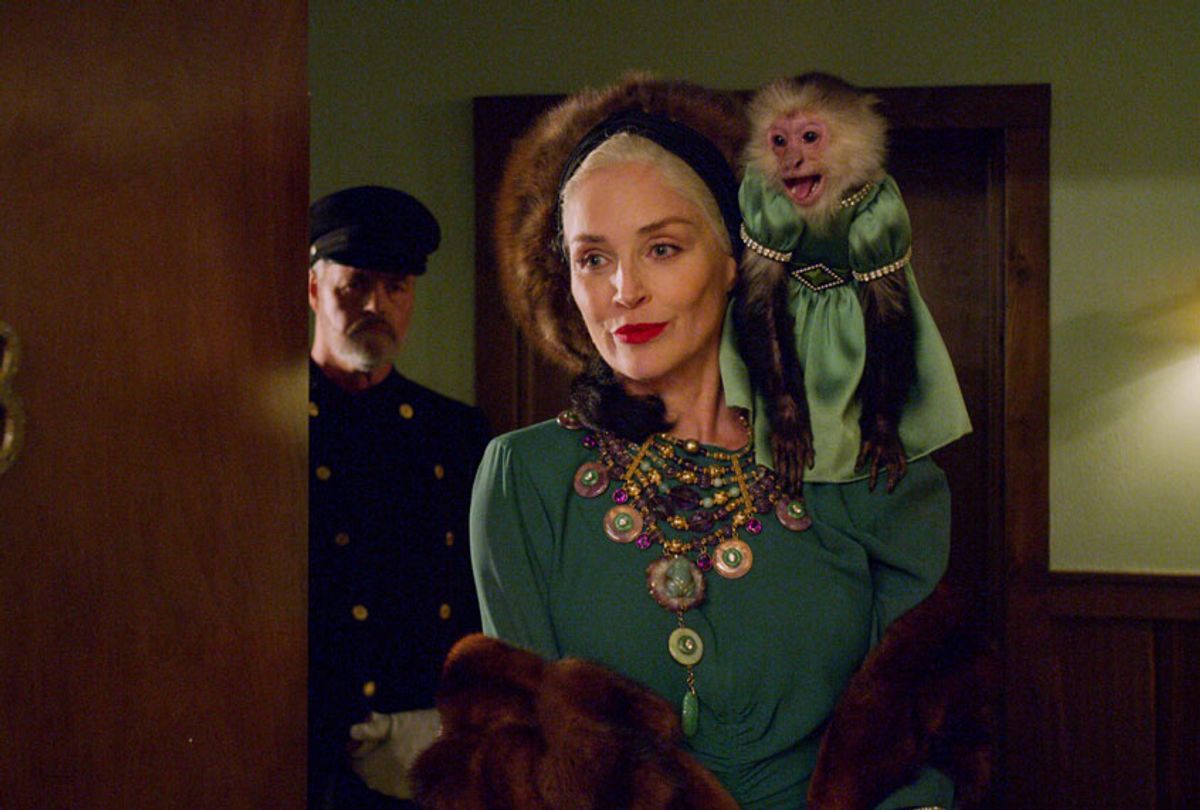 As the pandemic drags on — and my nerves about the impending election ramp up — I've found solace in lighthearted, predictably upbeat entertainment. So far, this has resulted in binging on whatever sketch comedy I could stream, to taking a deep dive into Netflix's short documentary selection and pulling out gems like "John Was Trying to Contact Aliens" and "Little Miss Sumo."

"Pineapple Express," the 2008 Judd Apatow comedy, comes to the streaming service this month. Starring Seth Rogen and James Franco, it's exactly what you want out of a stoner buddy movie. There's murder, fancy weed and relatively wholesome male friendships. I like how Roger Ebert put it in his original review of the film: "It's a quality movie even if the material is unworthy of the treatment. As a result, yes, it's a druggie comedy that made me laugh."

Leaving the service this month is the classic "Cheech and Chong's Up in Smoke." Released in 1978, the movie features Cheech Marin and Tommy Chong star as two stoners who, as Netflix puts it, are "in search for the perfect stash of hash and end up cruising around in a van made of pot." Catch it before October.

Also, leaving the service this month is the original "Jurassic Park" trilogy, a mere two months after its arrival. Now, I'm a "Jurassic Park" superfan. That scene with Ian Malcolm basically shirtless (you know the one) took up a lot of space in my high school brain, I've managed to weave the phrase "life finds a way" into not one, but two cover letters, and this string quartet version of the "Jurassic Park Theme" seems like a totally acceptable wedding processional idea to me.

So, I'm a little disappointed, but I plan on doing at least another screening of the three original movies before September ends, along with the animated kids' series "Jurassic World: Camp Cretaceous" arriving on Sept. 18. In its place, the "Back to the Future" trilogy has entered the building. Whenever I see the film, I can't help but think of the John Mulaney bit about what it must have been like to pitch "Back to the Future" ("Marty McFly is a 17-year-old high school student whose best friend is a disgraced nuclear physicist — and, I s**t you not, they never explain how they became friends"), but that just somehow makes it better?

Between watching and rewatching these movies, check out new highlights of what's coming to Netflix this month:

The Emmy-nominated series is back, delving into the smoky, juicy world of barbecue, from Texas to Australia. I love watching the signature "Chef's Table" slow-motion shots — scored by Vivaldi — applied to ribs and slabs of pork. Featured chefs are Tootsie Tomantez, an 85-year-old grandmother who still shovels the coals at her Texas restaurant; Lennox Hastie, an Australian chef who has a deep love and appreciation for the depth fire can add to food;  Rodney Scott of South Carolina, who is known for his whole hog barbecue; and Rosalia Chay Chuc, a traditional Mayan chef who serves cochinita pibil out of her Mexico home.

In this series executive produced by Jason Katims ("Friday Night Lights"), Oscar winner Hilary Swank stars as as Emma Green, an astronaut embarking on a treacherous mission to Mars, commanding an international crew. She leaves behind her husband (Josh Charles) and teenage daughter, whom she won't see for three years . . . if nothing goes wrong. But this is an undertaking no other people have tried before, and the only resources they have are aboard the Atlas, and another capsule that's supposed to land on Mars ahead of them.

"The astronauts are looking at a 50-50 chance of survival on the mission," Salon's Hanh Nguyen writes about the series. "This is not about fixing a flat or riding out some turbulence; every trial the crew will face is potentially fatal. The writers had no shortage of grim yet believable challenges — and solutions — to throw at the astronauts, thanks to plenty of research and resources."

Based on Canadian writer Iain Reid's 2016 debut novel of the same name, Charlie Kaufman's adaptation of "I'm Thinking of Ending Things" stars Jessie Buckley as a woman who is experiencing misgivings about her new boyfriend, played by Jesse Plemons, as she joins him on a road trip to meet his parents on their remote farm.

In Salon's review, Gary Kramer writes, "The tone here is deep melancholy throughout. With bleak, heartbreaking images of isolation and desolation, either reading is possible. And while some viewers will be spellbound as [Buckley's character] experiences thoughts of anxiety and despair, others are sure to rate this film as an endurance test. Again, both interpretations are plausible."

This documentary follows as Emmy nominee Craig Foster develops a special, unusual bond with an octopus living in a South African kelp forest. Foster learns about the mysteries of his new friend's world, while also learning new things about himself.

In this Netflix original series, Katherine Ryan stars as a single mom juggling her career, her tween daughter and her relationship with her boyfriend — all while wondering if she should have a child with her nemesis: her first daughter's father.

A 2-year-old girl from Bangkok — nicknamed "Einz" — became the youngest person in the world to undergo cryo-preservation. After her death from brain cancer, her family stores her remains in an American lab. Her head and brain now rest inside a tank in Arizona. "Hope Frozen" follows the family who made this unorthodox decision. The girl's father, a laser scientist, yearns to give Einz the opportunity to experience a rebirth inside a regenerated body. He instills this dream inside his son, a 15-year-old whiz kid named Matrix, who wants to be a part of reviving his little sister. But what the boy later discovers will rattle the family's radical hope in science.

Produced by Bad Robot with Oscar Winning producer Glen Zipper ("Undefeated" and Netflix's "Dogs"), this four-part docuseries explores the events leading up to that fatal day on January 28, 1986 when the shuttle exploded on departure, killing all seven crew members including Christa McAuliffe, the first teacher set to fly and teach in space.

The series speaks to family members of the astronauts, several former NASA astronauts, and many others, including those in the control room on that day.

Based on Donald Ray Pollock's award-winning novel, this Midwestern Gothic tale takes place in Knockemstiff, Ohio and its neighboring backwoods, as sinister characters — an unholy preacher (Robert Pattinson), twisted couple (Jason Clarke and Riley Keough), and crooked sheriff (Sebastian Stan) — converge around the young Arvin Russell (Tom Holland) as he fights the evil forces that threaten him and his family.

More barbecue content! "American Barbecue Showdown" is an eight-episode food competition that follows the country's best backyard smokers and professional pitmasters as they compete for the title of American Barbecue Champion. Each week they will be pushed to their creative limits — from using unique meats to having to showcase old-school techniques — by judges Kevin Bludso and Melissa Cookston, who then see if the competitors can prove they have the skills to smoke another day.

Produced by Ryan Murphy and Ian Brennan, "Ratched" follows the titular nurse (Sarah Paulson) — made famous "One Flew Over the Cuckoo's Nest" — as she arrives in Northern California after serving as a military nurse, seeking employment at a well-reputed psychiatric hospital. But there's something sinister beneath Mildred's stylish, put-together surface.

While she presents herself as an ideal nurse, her capacity for manipulation and revenge soon becomes evident — even, as the trailer shows us, over something as small as a stolen peach — especially as she turns her sights on the mental health care system and those within it. The star-studded cast includes Judy Davis, Cynthia Nixon, Amanda Plummer, Sophie Okonedo, and Sharon Stone as a mysterious wealthy woman with a well-dressed monkey.

Latasha Harlins was 15 when she was wrongfully killed by Soon Ja Du, 13 days after the brutal beating of Rodney King; Du was found guilty of voluntary manslaughter but received no jail time. The killing of Latasha Harlins became a flashpoint for the 1992 LA uprising. This documentary evocatively explores the teenager's life and dreams.

"The Playbook" profiles legendary coaches as they share the rules they live by to achieve success in sports and in life. Through emotional and in-depth interviews, each coach reveals the critical moments in their personal lives and careers that ultimately helped form their coaching philosophies.

Buteau — an actress and writer known for "Always Be My Maybe," "Isn't It Romantic" and her turn on "Key and Peele" — is set to charm viewers in her upcoming Netflix comedy special "Welcome to Buteaupia" Produced by Page Hurwitz and Wanda Sykes, her one hour stand-up set will dive into topics ranging from cultural differences, to the value of short men, to the importance of government workers named Otis.

Here's everything coming to Netflix this month:

"Bad Boy Billionaires: India"
"Chef's Table: BBQ"
"Freaks: You're One of Us"

"Corazón Loco/So Much Love to Give"
"Get Organized with The Home Edit"
"La Línea: Shadow of Narco"
"Mignonnes/Cuties"
"The Social Dilemma"

"The Babysitter: Killer Queen"
"The Gift" Season 2
"Greenleaf" Season 5
"The Idhun Chronicles"
"Julie and the Phantoms"

"A Love Song for Latasha"